Accessibility links
11 Million Cars Worldwide Have Emissions 'Defeat Device,' Volkswagen Says : The Two-Way The software that the EPA says causes Volkswagen cars to cheat official emissions tests exists in only one type of diesel engine, the carmaker says — and it has sold 11 million of them. 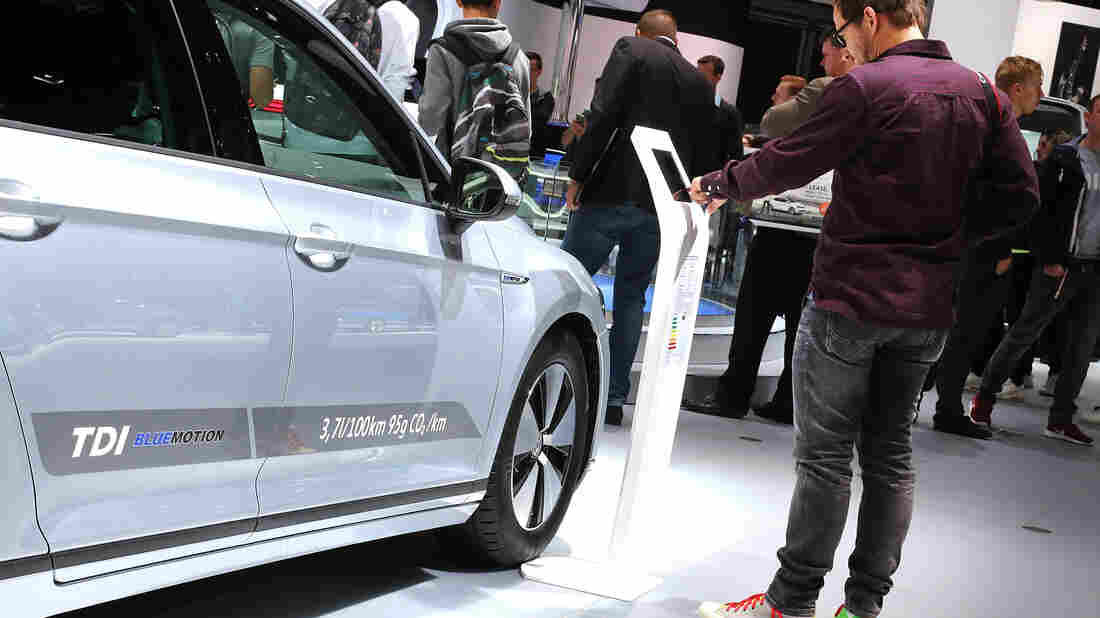 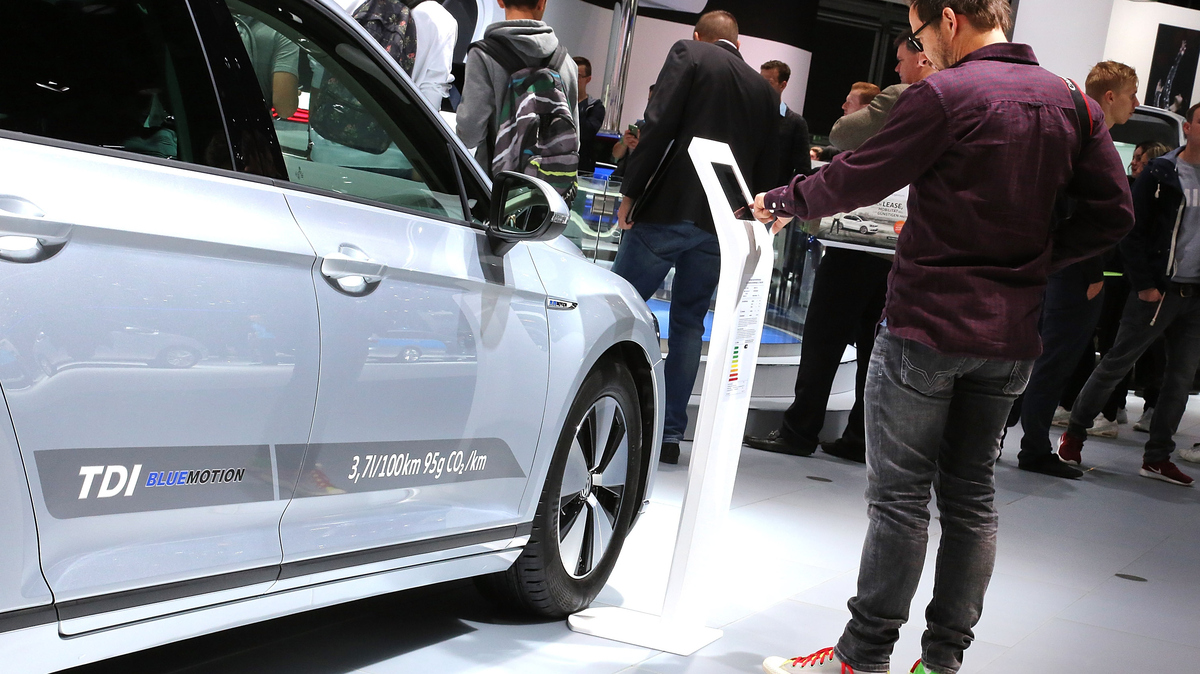 Visitors look at Volkswagen cars at the 2015 IAA Frankfurt Auto Show in Germany on Monday. Volkswagen CEO Martin Winterkorn has apologized to customers over a scandal involving emissions in its diesel cars.

The software that allegedly causes Volkswagen cars to cheat official emissions tests exists in only one type of diesel engine, according to the carmaker — and it has sold 11 million of them around the world. The company says it's setting aside 6.5 billion euros (around $7.25 billion) to fix the cars.

Providing an update to a scandal that began Friday, when the EPA said it found wide variations in emissions from VW cars that use a "defeat device" to fool emissions tests, the German company said that it's "working at full speed" to investigate the problematic software.

New York Attorney General Eric Schneiderman released a statement Tuesday announcing his office would be launching a separate probe into the European carmaker's actions and hinting that other states would join the investigation.

"No company should be allowed to evade our environmental laws or promise consumers a fake bill of goods. That is why my office is investigating troubling reports that millions of Volkswagen cars carried software designed to cheat emissions tests that protect our environment. We will seek to uphold New York's strong tradition of consumer and environmental protections as this investigation proceeds. We look forward to collaborating with Attorneys General across the nation on this matter."

Late last week, the Environmental Protection Agency said it was ordering VW to issue a recall for about 482,000 Volkswagen and Audi cars that have four-cylinder turbodiesel engines. The cars are outfitted with software that detects when an official emissions test is underway — and when the cars aren't being tested, they "emit up to 40 times more pollution" than allowed under U.S. standards, according to the EPA and the California Air Resources Board.

The EPA said that when it confronted Volkswagen with the results of its tests, the company admitted that the test-evading software was on the cars.

"I personally am deeply sorry that we have broken the trust of our customers and the public," Volkswagen CEO Martin Winterkorn said Monday.

Fallout from the emissions trickery stripped more than $15 billion away from Volkswagen's market value Monday, a figure that's roughly equal to the amount of fines that industry analysts say VW could face as a punishment.

From Seoul, NPR's Elise Hu reports, "The Environment Ministry here in South Korea says if wrongdoing is found, the European automaker could be fined up to $3.5 million and required to recall the vehicles."

The initial report from the EPA listed five models made from 2009-2015 that have what its inspectors (and the Clean Air Act) call a "defeat device." Three more models were added to the list to account for variations in styles. The list now includes both the Jetta sedan and "sportwagen," for instance (see full list below).

Tuesday, Volkswagen also said it "does not tolerate any kind of violation of laws whatsoever" and reiterated its goal of winning back its customers' trust.

As we reported Friday:

""The news that the Volkswagens produce far more pollution than is legal is sure to rattle some VW owners who bought their cars at least in part because of their perceived impact on the environment.

"The U.S. government also has reason to feel duped: Volkswagen's 'clean diesel' TDI engines earned a $1,300 federal tax credit for people who purchased a Jetta sedan or wagon back in 2009, the first year affected by the recall."

The EPA lists the cars that contain "a sophisticated software device that circumvents EPA emissions standards for certain air pollutants," below: