Accessibility links
What To Watch For During Pope Francis' U.S. Visit : The Two-Way Pope Francis arrives in the U.S. on Tuesday. From his reception at Joint Base Andrews in Maryland to a meeting with immigrants in Philadelphia, here's a look at moments that could prove momentous.

What To Watch For During Pope Francis' U.S. Visit

What To Watch For During Pope Francis' U.S. Visit 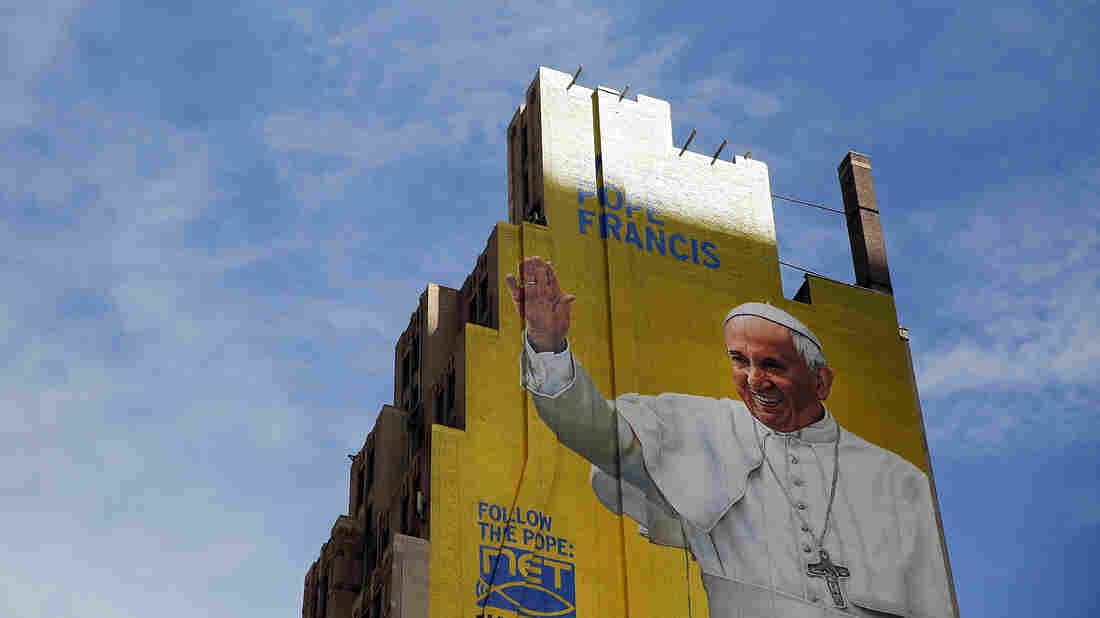 A mural of Pope Francis is viewed on the side of a building in midtown Manhattan in New York City. Spencer Platt/Getty Images hide caption 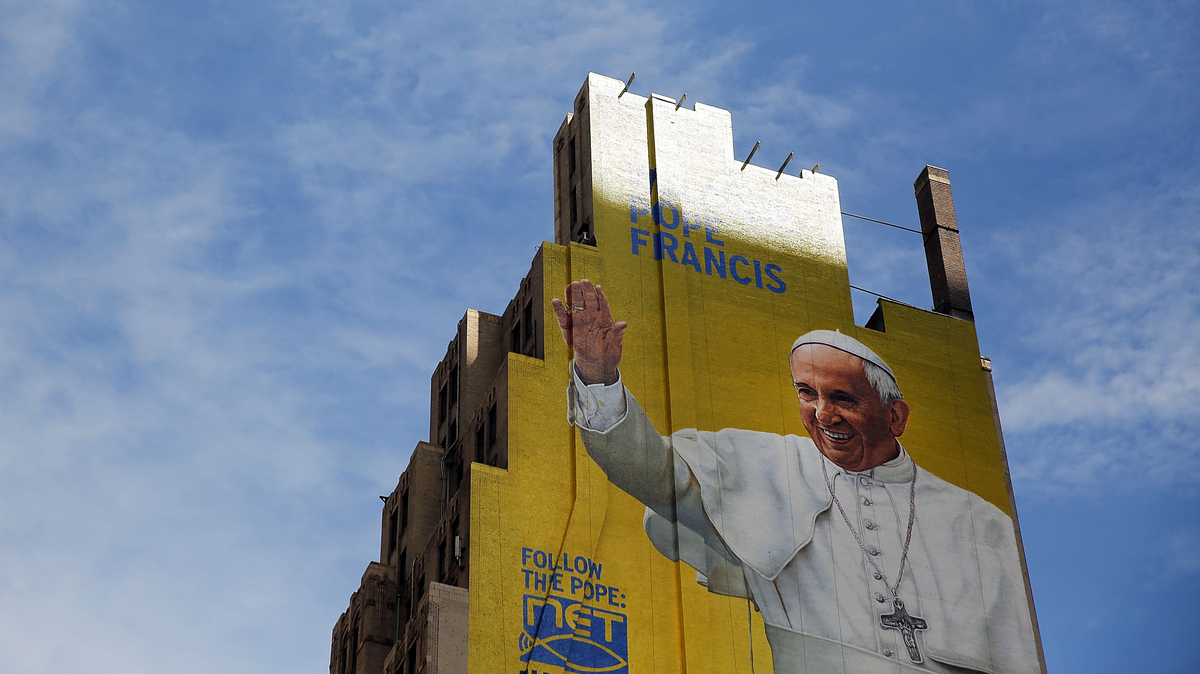 A mural of Pope Francis is viewed on the side of a building in midtown Manhattan in New York City.

Pope Francis arrives in Washington, D.C., this afternoon for his first trip to the U.S. Here's a look at some of the key moments to watch during the leader of the Roman Catholic Church's six-day visit.

Tuesday: The President Greets The Pope 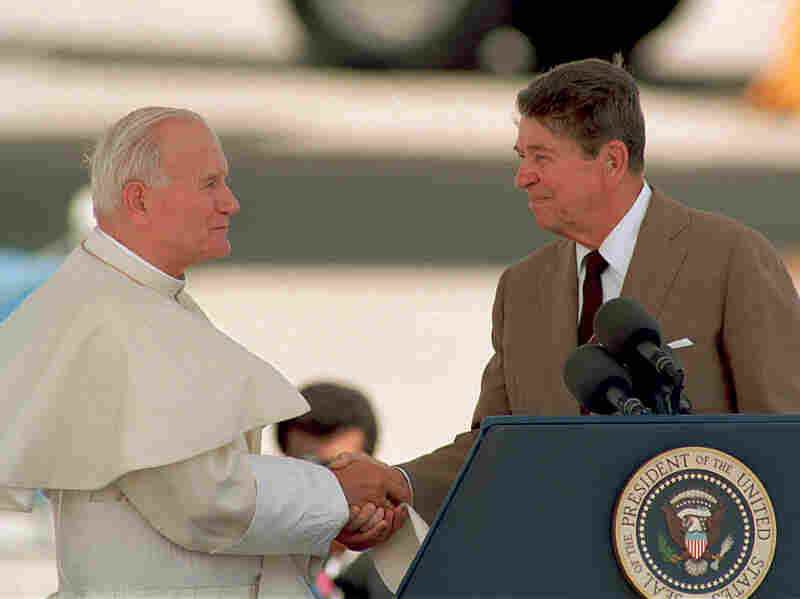 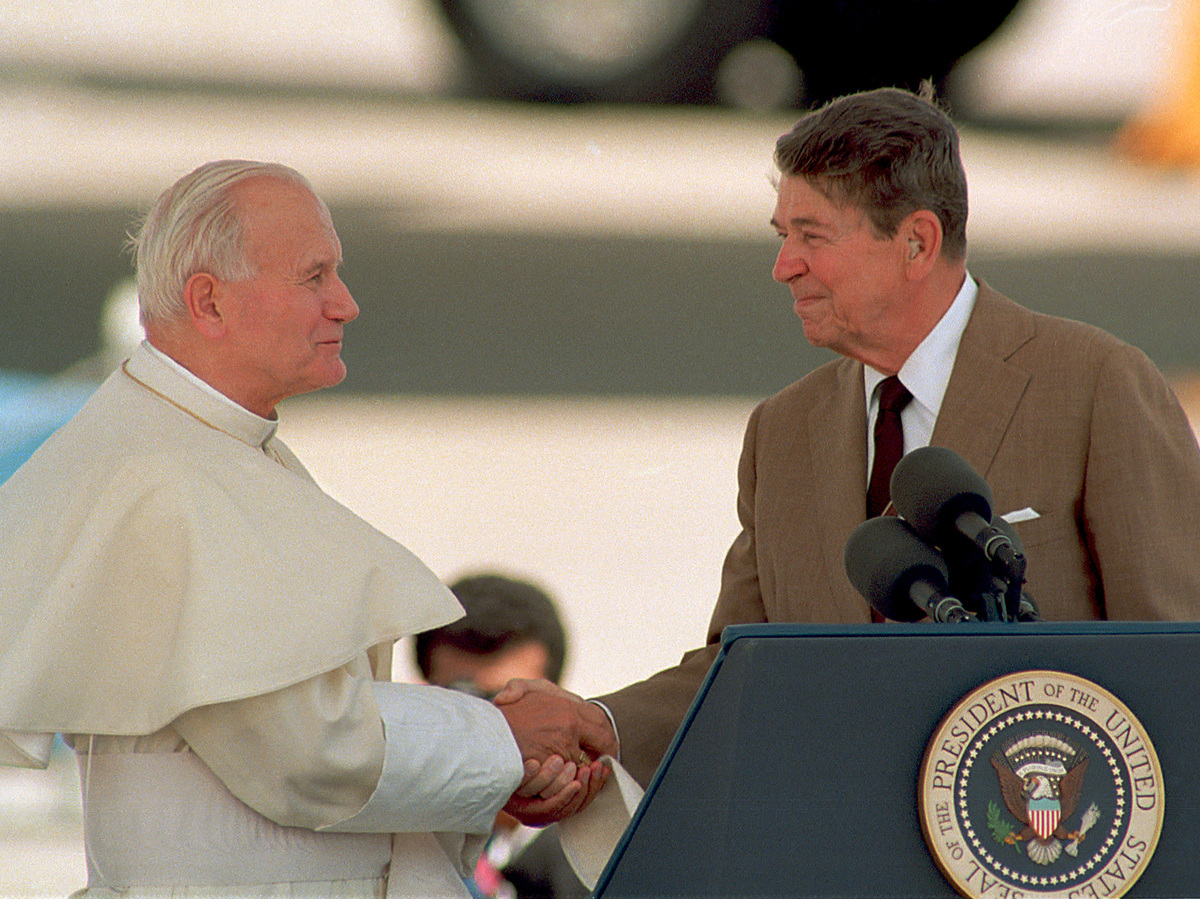 Francis will be the third pontiff to visit Washington, D.C. Both John Paul II (1987) and Benedict (2008) visited as well, and in both cases they were greeted by the president on their airport arrival. President Obama's reception of Francis at Joint Base Andrews in Maryland is therefore consistent with what has become U.S. custom, but it's fair to say that Obama and Francis have a common bond. Just as John Paul II and Ronald Reagan shared a determination to work against Communist regimes, Francis and Obama share important political goals. White House officials have called attention to the pope's role in the U.S.-Cuba opening and his advocacy of action to deal with climate change, both key issues for Obama. Watch both the airport reception and Wednesday's White House welcome to gauge the enthusiasm the two leaders have for each other and the extent to which they shower each other with praise.

Francis will meet with international bishops Sunday in Philadelphia, but this gathering at St. Matthew's Cathedral will be his one meeting with U.S. bishops exclusively. The pope has promised to carry on and extend his predecessor's policy of "zero tolerance" for abusive priests and the bishops who cover up for them. Earlier this year, Francis established a tribunal to "judge" bishops accused of not reporting or punishing priests accused of sexual abuse. Abuse victims and their advocates, however, argue that Francis has stopped short of decisive action. In accepting the resignation of an archbishop in Kansas City, Francis did not explain his action or connect it to the accusations made against the archbishop. U.S. bishops have lobbied against bills to lengthen the statute of limitations on crimes committed by priests, and they have — with some exceptions — resisted releasing the names of all priests known to be molesters. This is likely to be the meeting where the pope would give U.S. bishops some instruction and guidance on how to deal with the abuse issue, and victims' advocates will be watching closely to see what Francis says and does. It will be newsworthy if he speaks out — but also if he chooses not to. 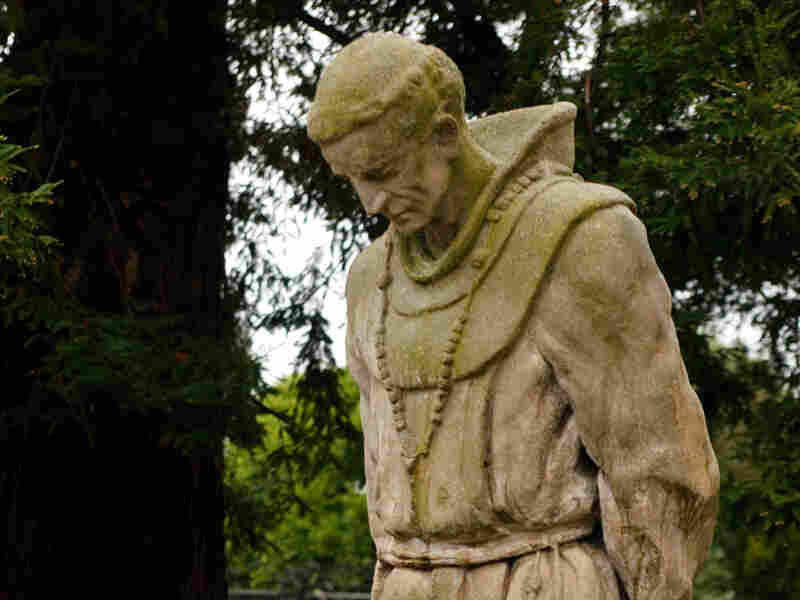 A statue of Father Junipero Serra stands in the cemetery of the historic Mission Dolores in San Francisco. Eric Risberg/AP hide caption 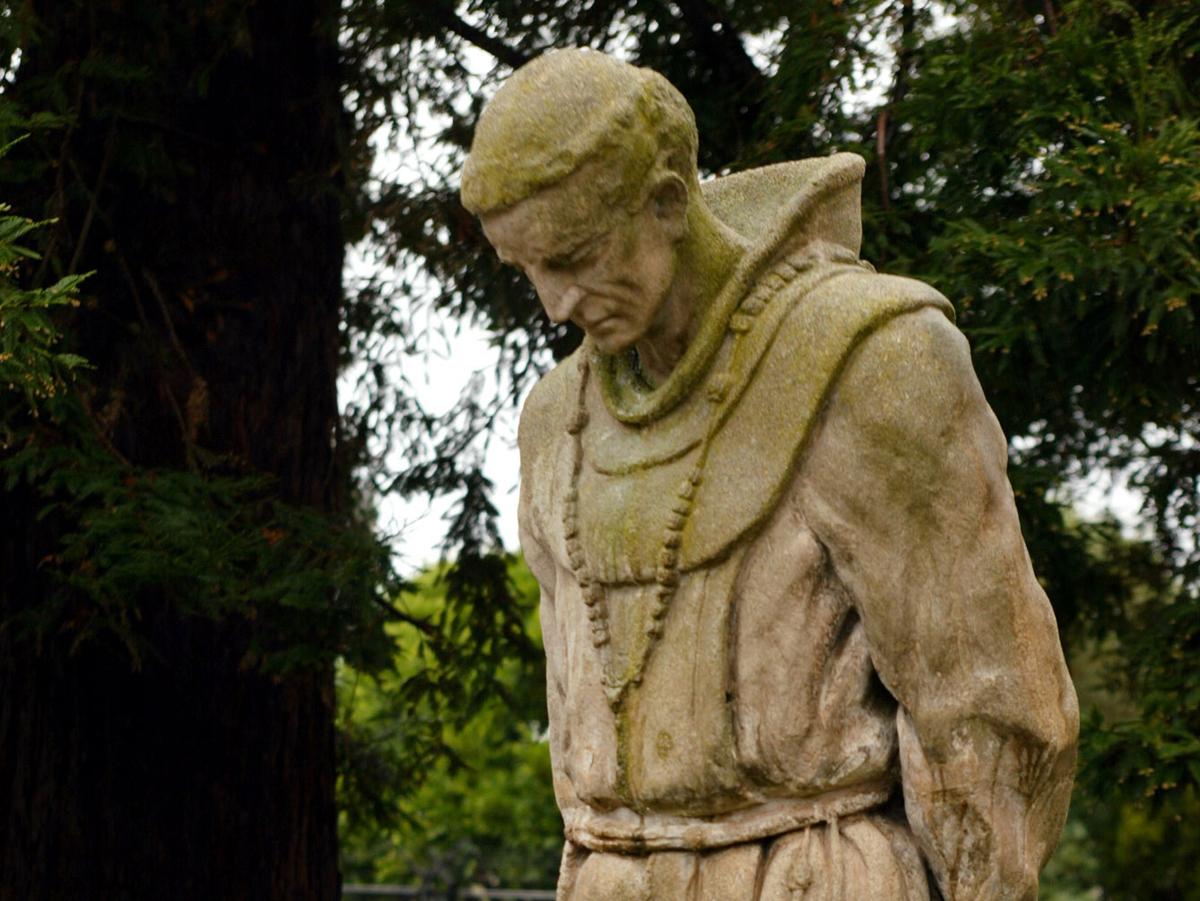 A statue of Father Junipero Serra stands in the cemetery of the historic Mission Dolores in San Francisco.

This will be the first big public Mass that Francis celebrates during his U.S. visit. The Mass is due to be held outside, and more than 25,000 people are expected to be on hand. This will be an important opportunity to assess how much public enthusiasm this pope generates in comparison to the crowds that gathered for John Paul II and Benedict. This will be an occasion in which Francis can cement his bond with the Latino community, as Junipero Serra is the first Latino Catholic to be canonized. Tickets to the canonization are being distributed principally to Latino parishes. Watch this Mass to see the extent to which U.S. Hispanics in particular are responding to this pope and the extent to which he presents himself as one of them. There may also be some protests at this Mass, led by representatives of Native American groups who object to the canonization of a priest who forcefully converted indigenous people to Christianity. The canonization Mass takes place on the afternoon of Yom Kippur, and Pope Francis may take the opportunity to speak of Judaism and Jewish-Christian bonds.

This is the main occasion pope-watchers will follow to see whether Francis will position himself in some of the ongoing political debates. He may choose to chastise those who deny the reality of climate change, who play down the problems associated with income inequality, or who defend the death penalty. But he may also aggravate some progressives if he speaks out strongly on abortion issues — as he did in Cuba — or on same-sex marriage. One interesting question is whether the pope will specifically mention what he has previously highlighted as the persecution of Christians in the Middle East. The Obama administration so far has not classified it as "genocide," preferring to speak in more general terms about the persecution of religious minorities. Activists will be watching to see whether Francis will speak more pointedly on this issue than the Obama White House has. 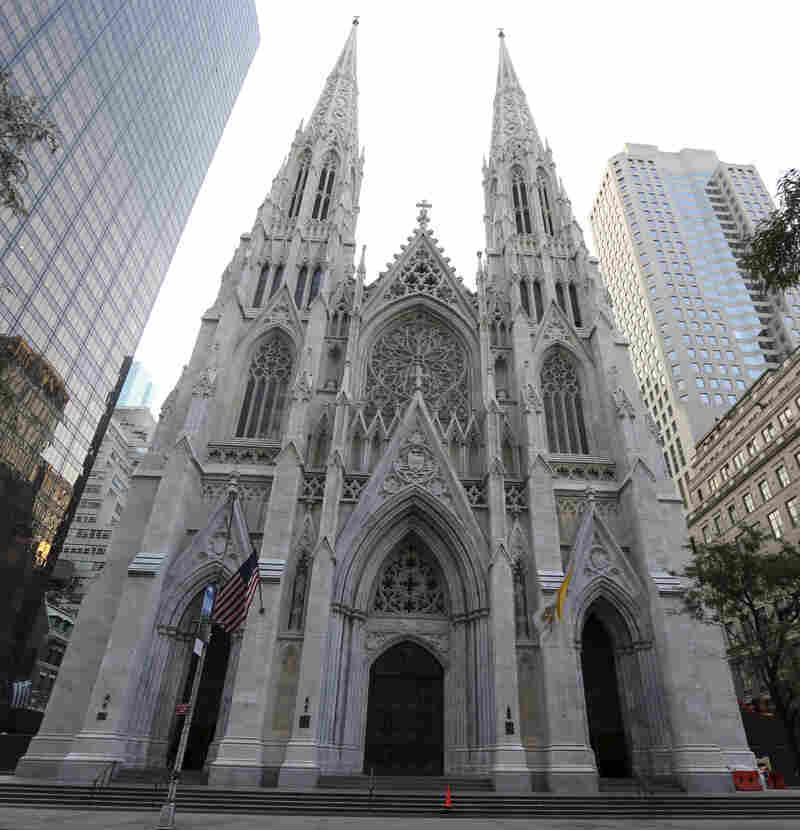 Ahead of Pope Francis' visit, St. Patrick's Cathedral in New York underwent a renovation that was done in three phases over three years, starting in 2012. Mary Altaffer/AP hide caption 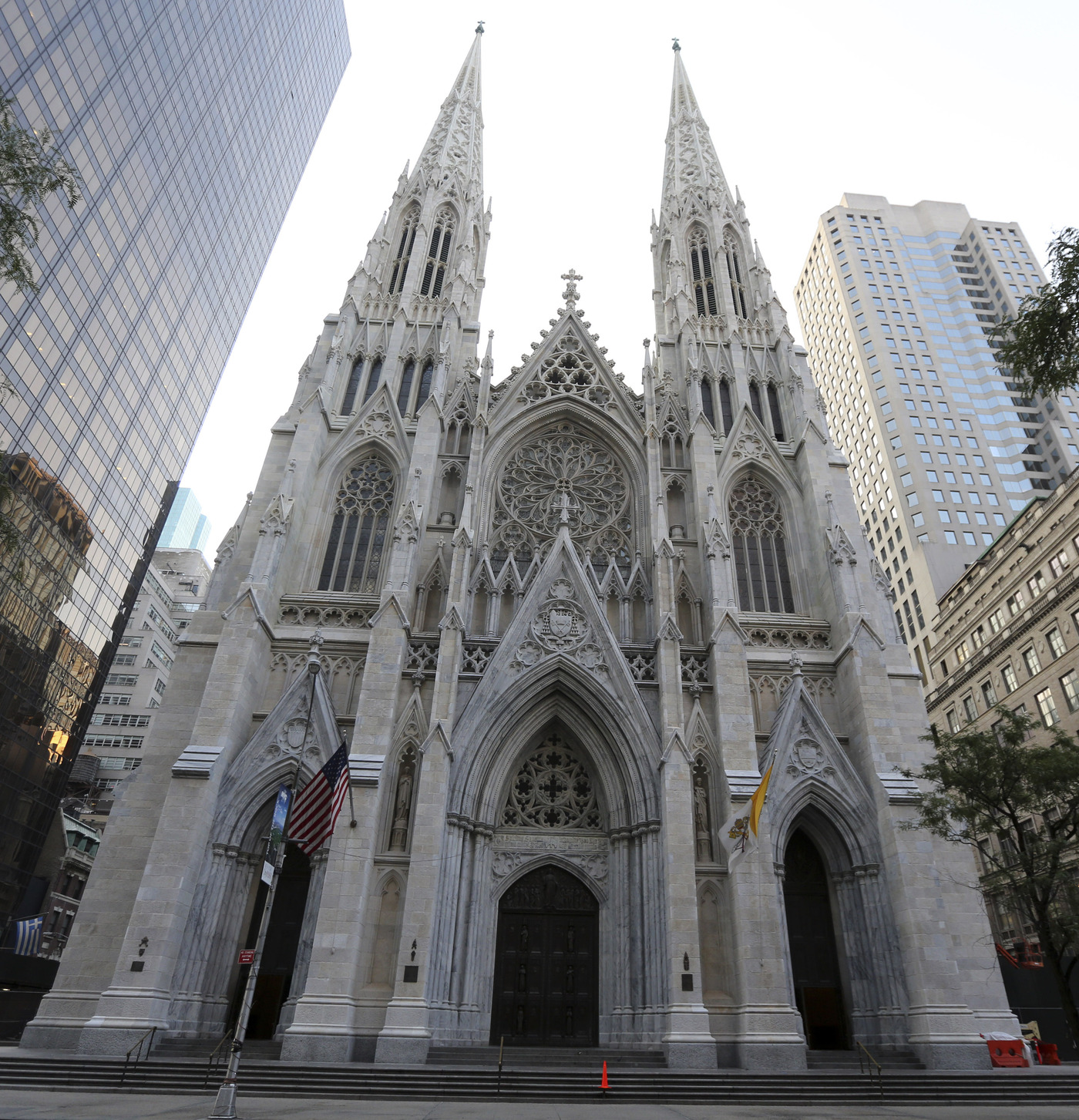 Ahead of Pope Francis' visit, St. Patrick's Cathedral in New York underwent a renovation that was done in three phases over three years, starting in 2012.

No event on the pope's U.S. schedule will conform more closely than this one to what Francis has chosen to emphasize throughout his pastoral career. Face-to-face meetings with people in need go to the heart of who this pope is. He is likely to be especially personable and human in this visit. He is known for his spontaneous conversations and commentary, and this is one place he is certain to show that side of his persona.

Friday: Address To The U.N. General Assembly In New York

Francis is the first pope not from Europe and the first pope who represents the global South. This will be the event where he lays out exactly what that means in terms of the issues he is choosing to emphasize, in comparison with his predecessors. Expect him here to speak out forcefully on environmental degradation, global poverty, and migration. The Vatican secretary of state, Cardinal Pietro Parolin, says Francis will enter the United States "as a migrant." Expect him here to align himself squarely with the hundreds of thousands of people who are on the move worldwide, driven by desperation and violence. This is probably the event where he is most likely to adopt a scolding tone.

As with Thursday's lunch with homeless people, Francis' visit to a school in East Harlem will be an opportunity for him to align himself with a segment of U.S. society that has missed out on the benefits of growth and prosperity. Expect more bold statements on the treatment of immigrants, both legal and illegal, and on the importance of better serving the most marginalized populations. 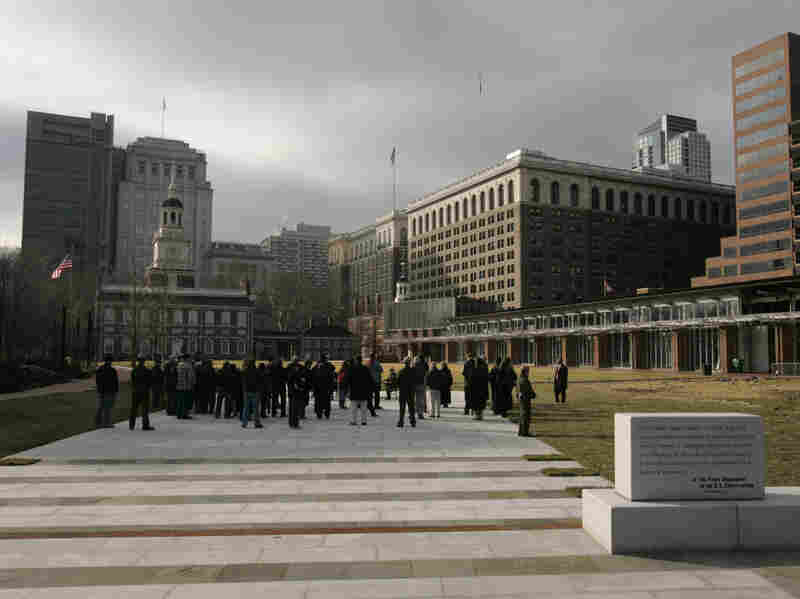 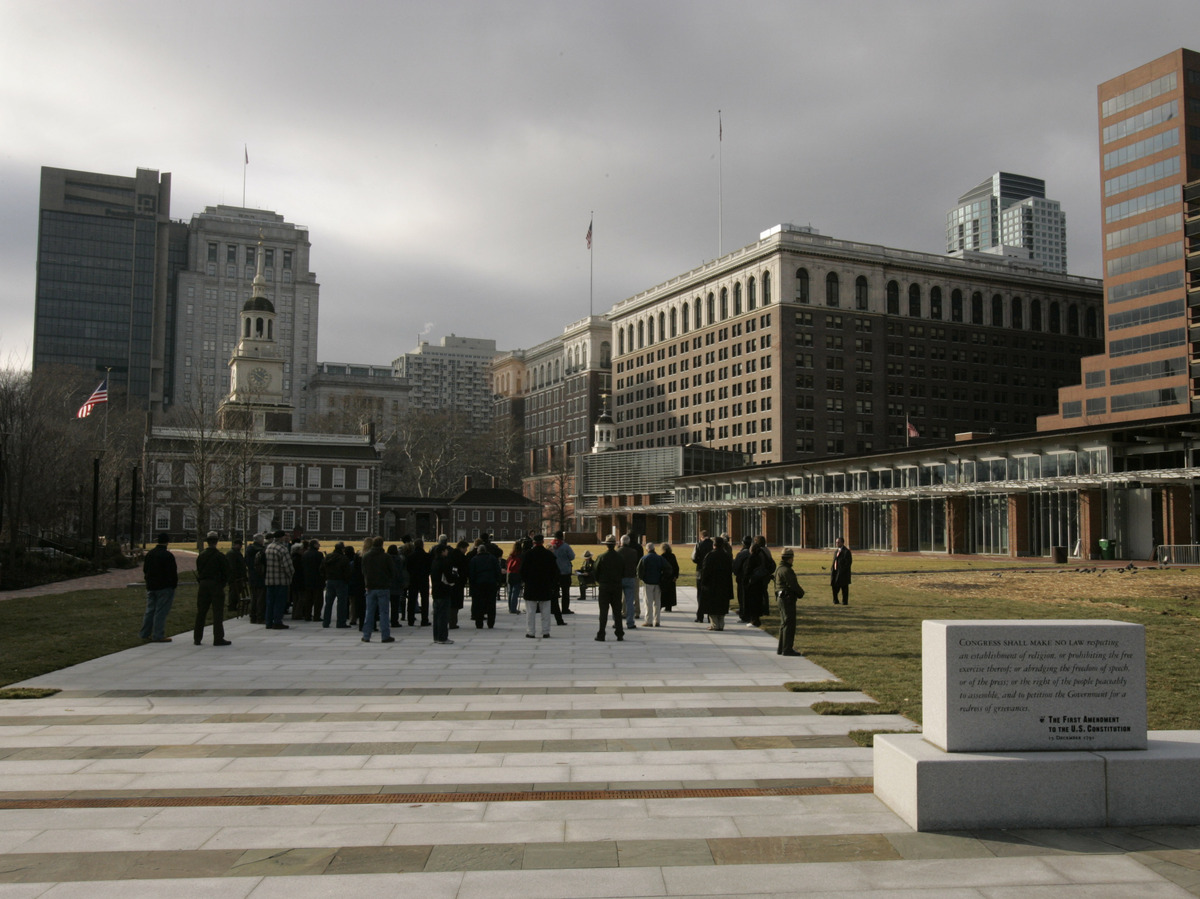 The People's Plaza on Independence Mall in Philadelphia.

This will be another occasion when pope-watchers will be looking to see whether Francis weighs in on immigration policy, one of the hottest political issues today. This could be a moment when the pope directly challenges the anti-immigrant rhetoric of some U.S. politicians.

Saturday-Sunday: Visit To Festival Of Families, Mass At World Meeting Of Families

If there is a place where Francis distances himself from progressives, it is likely to be here. On family issues, the pope has not strayed far from Catholic orthodoxy. He may reiterate his call for priests and bishops to forgive women who have abortions, and he may refer to his advocacy of easier annulment procedures, but it's uncertain whether he will move much on the church's opposition to divorced Catholics receiving Communion if their marriages have not been annulled, or on same-sex marriage, or on abortion. In Cuba, Francis spoke of the evils of a "throwaway culture" and specifically mentioned abortion, saying it amounted to killing children before they were born. If the pope is to address these social issues where he is in agreement with conservatives, look for it at this venue.

A subhead in an earlier version of this piece said the pope would have lunch with homeless people in New York on Thursday. The event is in Washington.