Accessibility links
Obama, Castro To Meet At U.N. Next Week : The Two-Way The two leaders will have their second, informal, face-to-face meeting since April at the General Assembly meeting in New York.

Obama, Castro To Meet At U.N. Next Week

Obama, Castro To Meet At U.N. Next Week

President Obama and Cuba's President Raul Castro will meet on the sidelines of the United Nations General Assembly on Tuesday, a White House official says.

The leaders met face-to-face in April in Panama for the first time. This would be their second such meeting, an official told reporters aboard Air Force One. 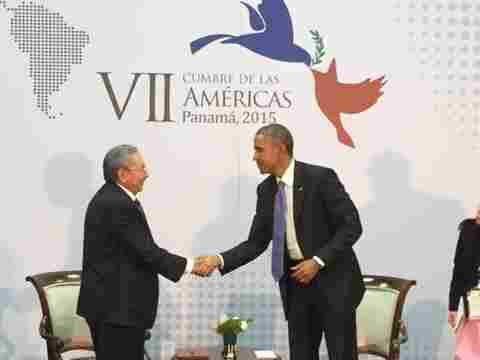 Cuban President Raul Castro and President Obama shake hands as they meet on the sidelines of the Summit of the Americas in Panama City, Panama, in April. Pool/Scott Horsley hide caption

"Obama arrived late Sunday morning for three days in New York, and perhaps the most anticipated moment was to come Monday evening — a meeting with Russian President Vladimir Putin on the sidelines of the annual gathering of world leaders.

"It will be their first face-to-face meeting in nearly a year. Both leaders also were to address the opening of the assembly's annual ministerial meeting on Monday.

The U.S. and Russia have quibbled over who requested the meeting and what the focus will be. Putin wants to talk about Syria; Obama wants to concentrate on Ukraine."