Accessibility links
Why NASA Didn't Just Send Over A Rover To Look For Water On Mars : The Two-Way One reason is that it would take the Curiosity rover about a year to get there, even with no obstacles and no traffic. But the other reason might surprise you. 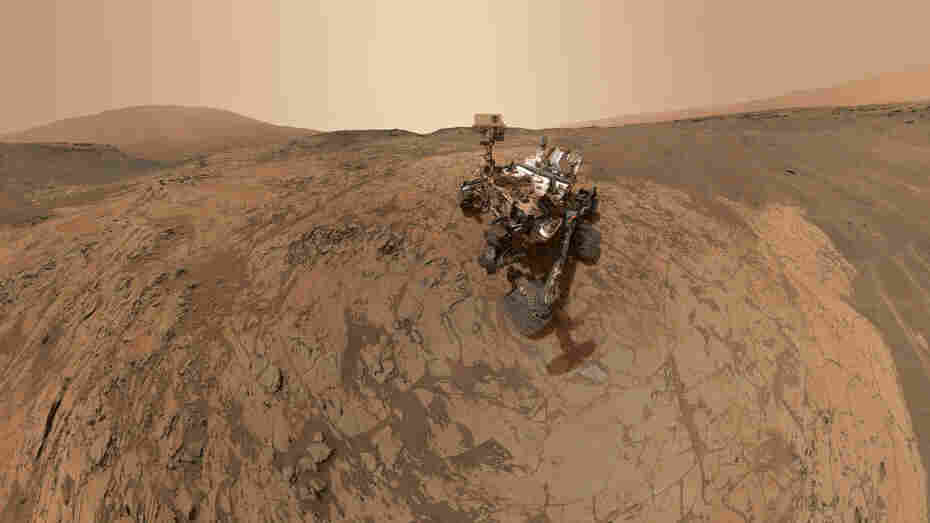 NASA's Curiosity rover took dozens of images that together made a selfie in January on the Mount Sharp area of Mars. NASA/JPL-Caltech/MSSS via Getty Images hide caption 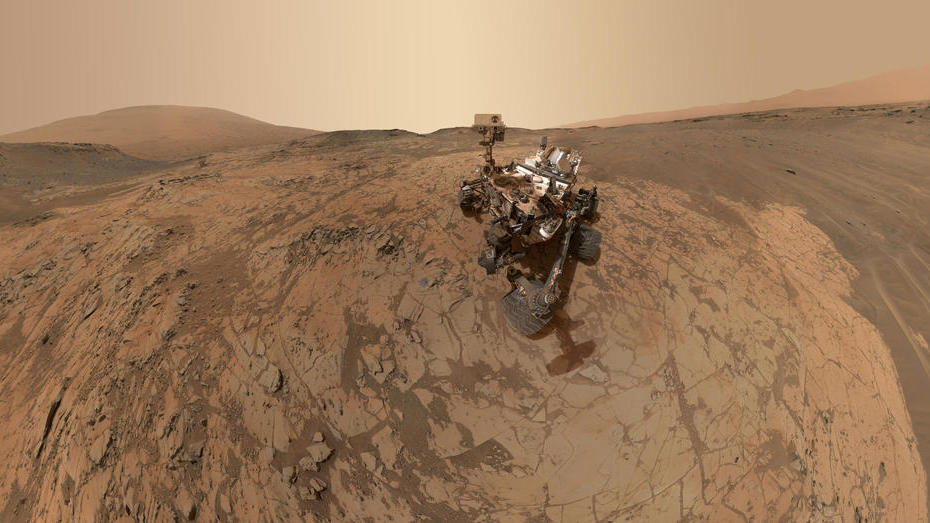 NASA's Curiosity rover took dozens of images that together made a selfie in January on the Mount Sharp area of Mars.

Mars is basically a pretty arid place, so it's pretty astonishing that the Mars Reconnaissance Orbiter was able to spot signs of liquid water on the planet's surface.

But even more astonishing in a way is that one of the places where signs of water was spotted is a mere 50 kilometers from where NASA's Curiosity rover has been exploring. After all, Mars is a pretty big planet, and signs of water have been spotted in only a handful of places.

So why not just have the rover drive over and take some close-up pictures?

Well, two reasons. One is that the farthest Curiosity has driven in a day is about 150 meters. So even with no obstacles in the way and no traffic, it would take about a year for the rover to get there. Scientists have many other things they want to do with the rover besides sending it on a yearlong drive.

The other reason may be a bit surprising. The site where the water was found is off-limits to Curiosity. Why? Because Curiosity may still be carrying some bacterial spores from Earth, and the last thing NASA wants to do is seed Mars with Earth bacteria. 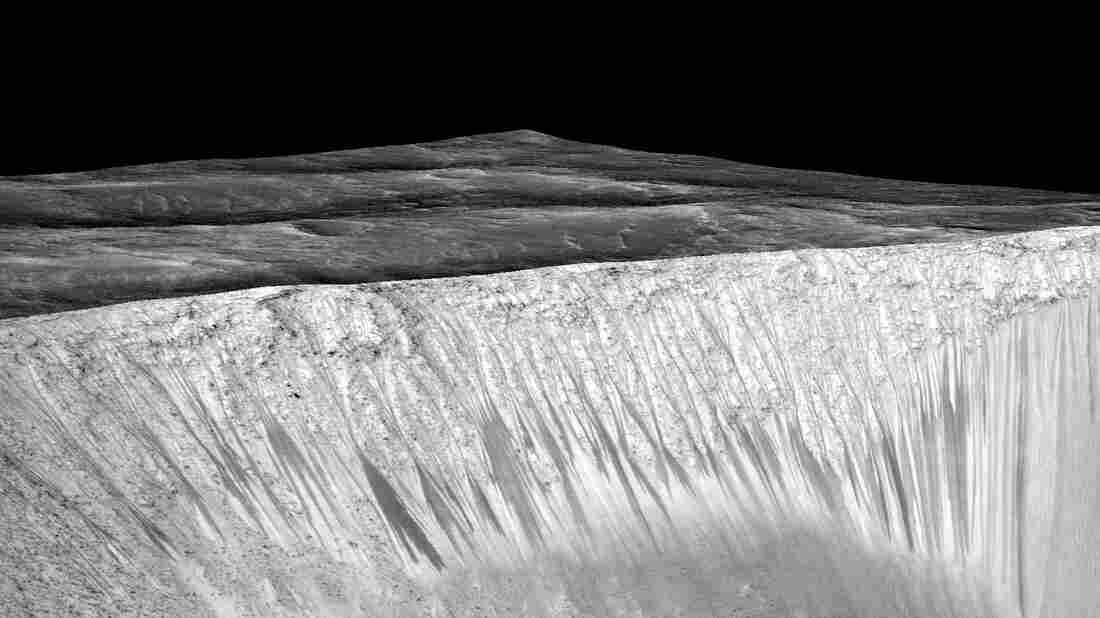 Streaks a few hundred feet in length appear on the walls of Garni crater on Mars. Scientists suspect they are formed by the flow of briny, liquid water. NASA/JPL/University of Arizona hide caption 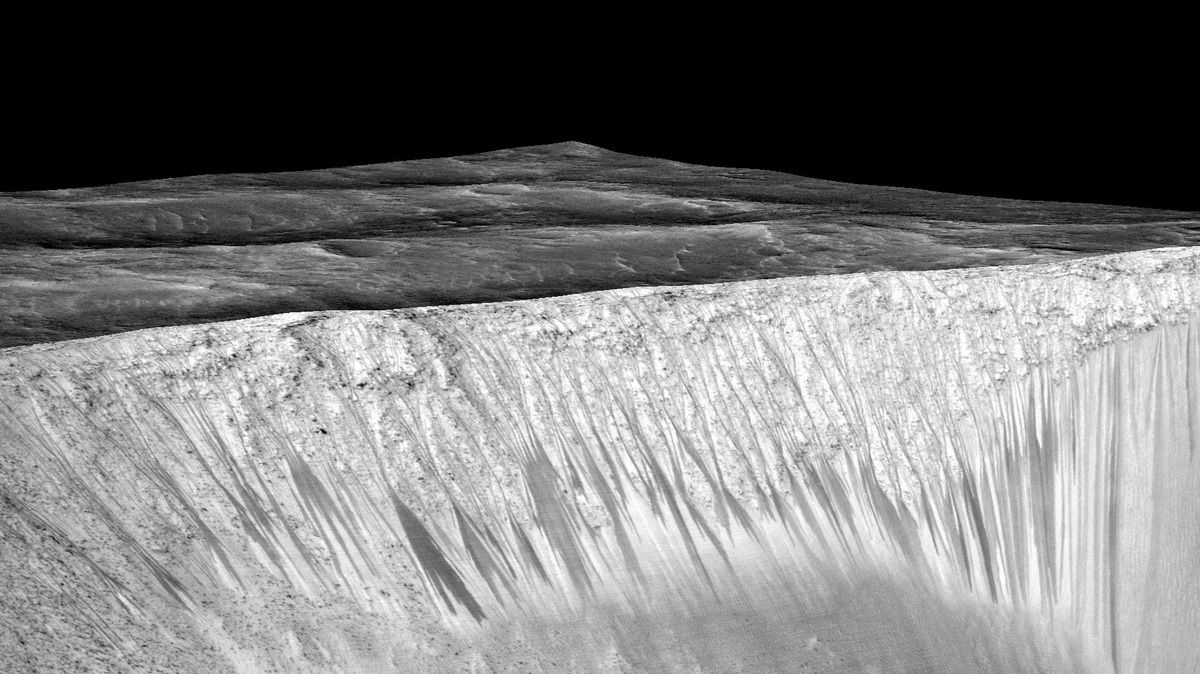 Streaks a few hundred feet in length appear on the walls of Garni crater on Mars. Scientists suspect they are formed by the flow of briny, liquid water.

NASA thinks a lot about planetary protection — there's an entire department devoted to the topic. There are several different categories of "cleanliness," depending on the mission. When the Viking missions went to Mars in the 1970s, they were designated Category IVc, meaning mission managers had to go to extraordinary lengths to make sure there were no microbial passengers from Earth on board when the landers reached Mars. The landers were basically baked in an oven to kill anything living. That means making special electronics that can withstand the heat, adding considerably to the cost of the mission.

But Viking was a life-detection mission, and if it indeed found signs of life, the space agency wanted to be darn sure those signs came from a Martian microbe, not a terrestrial one. (It didn't find signs of life, by the way.)

Curiosity, and the other Mars rovers, are not life-detection missions. So NASA has decided they only need to be Category IVb, meaning some bacterial spores are OK, so long as the rovers stay away from places where there might be water present.