Accessibility links
'It Was Installed For This Purpose,' VW's U.S. CEO Tells Congress About Defeat Device : The Two-Way Michael Horn testified on the same day German prosecutors raided VW offices at its headquarters in Wolfsburg, seizing documents and records as they investigate the emissions scandal.

'It Was Installed For This Purpose,' VW's U.S. CEO Tells Congress About Defeat Device

'It Was Installed For This Purpose,' VW's U.S. CEO Tells Congress About Defeat Device 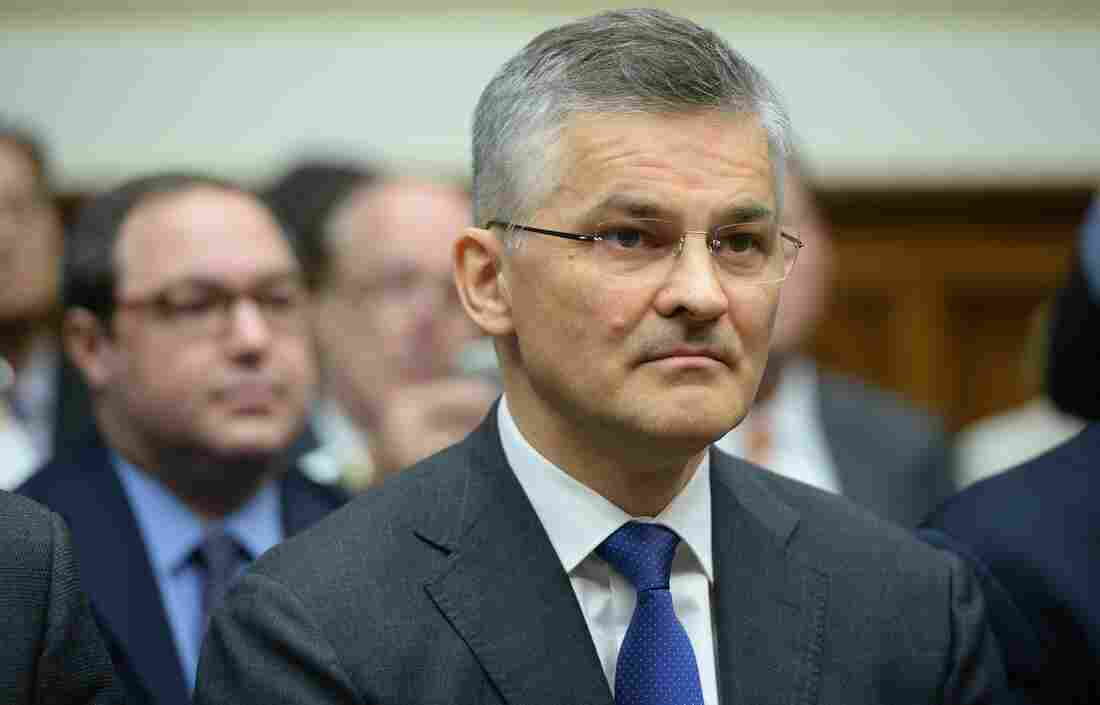 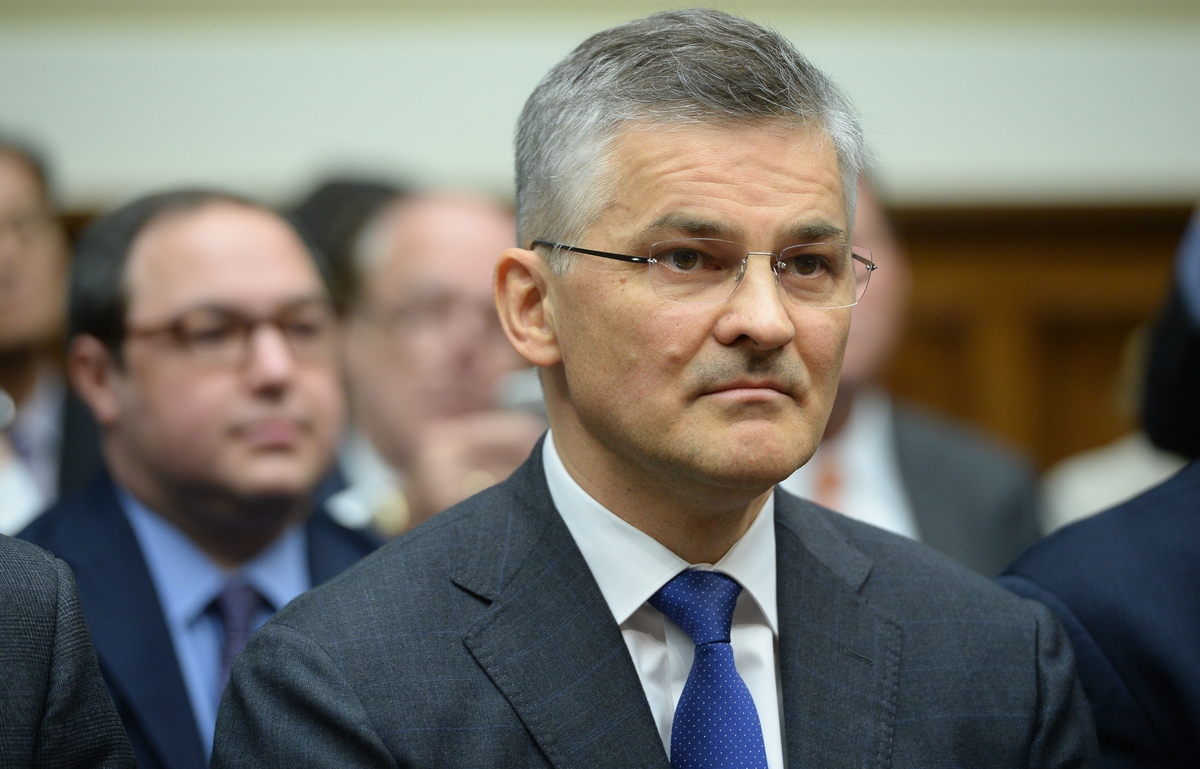 Volkswagen Group of America President and CEO Michael Horn testifies before the House Committee on Energy and Commerce Subcommittee on Oversight and Investigations on the Volkswagen emissions cheating scandal Thursday.

Michael Horn, the CEO of Volkswagen's U.S. business, appeared before members of Congress on Thursday to answer questions about the German automaker's use of software in its diesel vehicles to fool emissions tests. VW has said some 11 million vehicles worldwide have the software.

Horn testified on the same day German prosecutors raided offices at Volkswagen's headquarters in Wolfsburg and elsewhere, seizing documents and records as they investigate the emissions scandal.

Volkswagen has "withdrawn the application for certification of our model year 2016 vehicles," Horn told the House Committee on Energy and Commerce Subcommittee on Oversight and Investigations, adding that the company is still working with U.S. agencies on the certification process.

"On behalf of our company, and my colleagues in Germany," Horn said, "I would like to offer a sincere apology for Volkswagen's use of a software program that served to defeat the regular emissions testing regime."

Horn also acknowledged hearing of possible problems in spring of 2014 — but he said he didn't get confirmation of Volkswagen's use of an emissions "defeat device" until last month.

U.S. lawmakers are looking for answers about a scandal that has resulted in the Environmental Protection Agency ordering a recall of 482,000 vehicles — and concerns that the cars have for years been putting out up to 40 times the legal limit of pollution.

During the hearing, several lawmakers suggested that the only way Volkswagen can truly solve the problem is to buy back all of the cars — for their original purchase price.

We'll update this post with more news from Horn's appearance.

The panel hearing has taken a prolonged break — perhaps until 2 p.m. — to allow Republican House members to meet with their caucus.

On the same morning Horn is testifying on Capitol Hill, we're receiving news that German prosecutors have raided Volkswagen's headquarters in Wolfsburg and elsewhere, seeking records about the emissions trickery.

"German prosecutors seized 'an extensive collection of documents' from the VW headquarters in Wolfsburg today," Esme Nicholson reports for NPR's Newscast. "They say they were targeting material that would help identify those responsible for the manipulated emissions data."

Esme adds, "The crisis has seen VW's share prices drop by more than a third and prompted investigations across the globe."

Responding to questions from Rep. Joe Kennedy, D-Mass., about Volkswagen's corporate governance, Horn says the group must learn from this experience "and get their act together."

Rep. Joe Barton, R-Texas, opens his questioning by noting that he is a trained engineer, that his daughter drives a Volkswagen Beetle and that he has had much respect for the company.

Barton goes on to discuss the "immorality of the corporate decision to knowingly cheat" on American emissions standards, adding that it's something he would not have believed without so much proof.

"This was not a corporate decision," Horn says. He adds that as he understands it, it was "a couple of software engineers" who put the device into the cars. When Barton reminds him that he's under oath, Horn says he knows.

Barton then asks whether, given Volkswagen's reputation for being well-run, it's possible that the company's top hierarchy didn't know about a crucial detail such as a defeat device in its cars.

"I agree, it's very hard to believe," Horn said. He added that it is a struggle for him, as well.

Asked whether he feels personally betrayed by Volkswagen's use of the defeat device in VW and Audi vehicles, Horn tells Rep. Kathy Castor, D-Fla., "Yes."

He goes on to say that he has worked for Volkswagen for 25 years and had never doubted its sincerity.

Horn says diesel cars represent around a quarter of the business at the company's 650 VW dealers and 350 Audi dealers.

Update at 11 a.m. ET: Compliance And Help For Dealers

Horn says the first round of software fixes will be released in January of 2016 for the most recent generation of engines, with the next most-recent generation getting fixes sometime around the middle of the year. He doesn't give details on the first-generation engines.

Rep. Fred Upton, R-Mich., asks about what Volkswagen will do for dealers who are now holding on to the troubled diesel cars on their lots.

Horn says the company paid bonuses of $1,000 per car to dealers, and also wired money to give VW dealers flexibility to handle the crisis locally. He did not reveal that second dollar amount.

Horn says he is "damn sincere about this" — that dealer profitability is his first priority in the U.S.

Horn says he is not an engineer and doesn't fully know how the defeat device works — he also says the systems originated in Germany, not in Volkswagen's American division.

The CEO also says that for thousands of recalled cars, a software fix wouldn't be enough — and hardware changes would have to be made to get the cars into compliance.

Responding to a question from panel chairman Rep. Tim Murphy, R-Pa., about whether the software was installed "for the express purpose of beating tests," Horn responds that to his knowledge, "It was installed for this purpose, yes."

Horn says the move was evidently made because of tightened emissions standards.

Responding to another question, Horn says he only knew that the vehicles contained the defeat devices shortly before a Sept. 3 meeting with federal regulators.

He adds that only after the West Virginia University study of diesel cars did he begin to learn about what a defeat device is.

"We will find remedies for our customers, and we will work to ensure that this will never happen again," Horn says.

After being offered legal counsel, Horn is sworn in. He then delivers his prepared testimony, saying that his company is still in the early stages of its investigation.

Opening today's meeting, both the leading Republican and the leading Democrat on the committee said their first cars had been Volkswagens.

After Rep. Tim Murphy, R-Pa., spoke of his fondness and trust in the Volkswagen he drove as a young man, Rep. Diana DeGette of Colorado said she had a 1960 ragtop convertible that she inherited from her grandmother. "I still miss that car," she added.

Horn says that he's known about "possible emissions noncompliance" in Volkswagen's cars in the U.S. for more than a year, dating back to a West Virginia University study on diesel vehicle emissions in road tests, which was published in May of 2014.

"I was also informed that the company engineers would work with the agencies to resolve the issue," Horn says in his prepared testimony before the House Committee on Energy and Commerce Subcommittee on Oversight and Investigations.

Volkswagen is said to have been warned against using software to get around emissions tests on its diesel cars as early as 2007, as we've reported.

Horn's testimony includes a summary of the carmaker's admission to cheating on emissions tests, nearly two weeks before the EPA publicly accused the company of skirting the rules:

"On September 3, 2015, Volkswagen AG disclosed at a meeting with the California Air Resources Board ('CARB') and the U.S. Environmental Protection Agency ('EPA') that emissions software in four cylinder diesel vehicles from model years 2009-2015 contained a 'defeat device' in the form of hidden software that could recognize whether a vehicle was being operated in a test laboratory or on the road. The software made those emit higher levels of nitrogen oxides when the vehicles were driven in actual road use than during laboratory testing."