Accessibility links
Russian Official: Airliner Broke Apart In Flight Over Sinai Peninsula : The Two-Way The plane bound for St. Petersburg, Russia, from the Egyptian town of Sharm el-Sheikh plummeted "abruptly from 31,000 feet just 23 minutes" after it took off, according to The Associated Press. 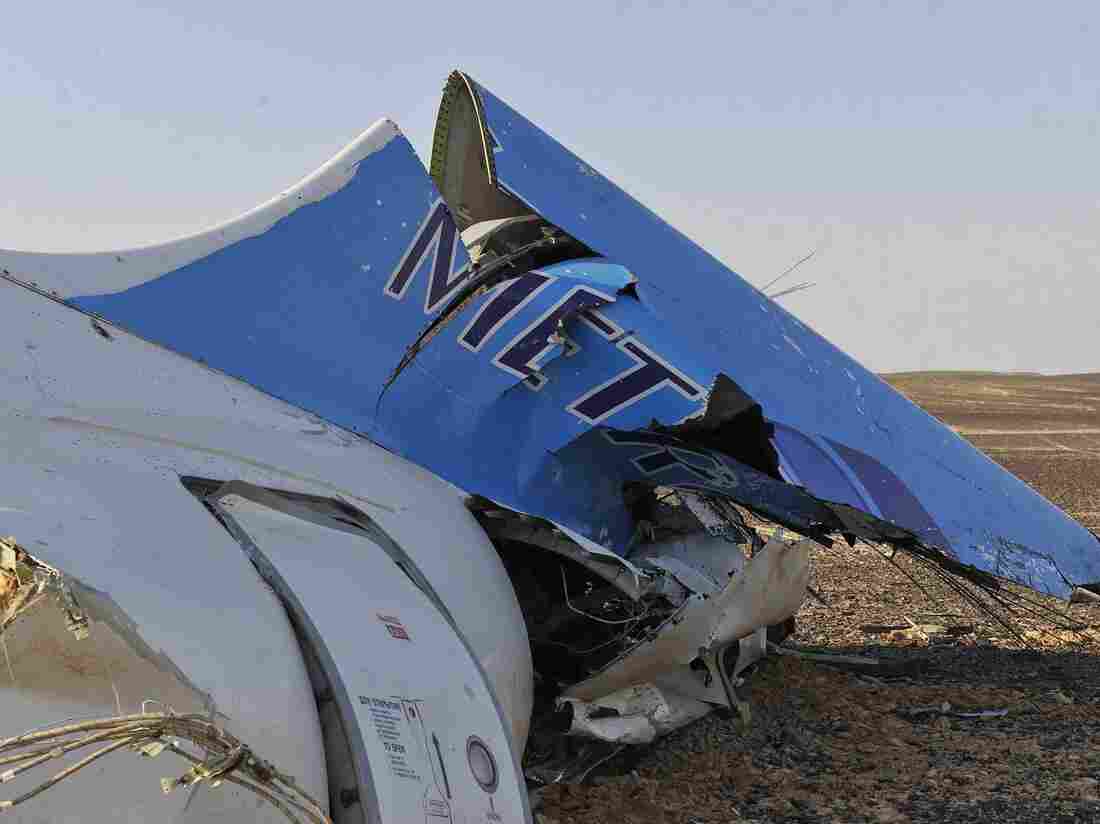 The Russian aircraft carrying 224 people crashed Saturday in a remote mountainous region in the Sinai Peninsula about 20 minutes after taking off from the Egyptian Red Sea resort town of Sharm el-Sheikh. Suliman el-Oteify/AP hide caption 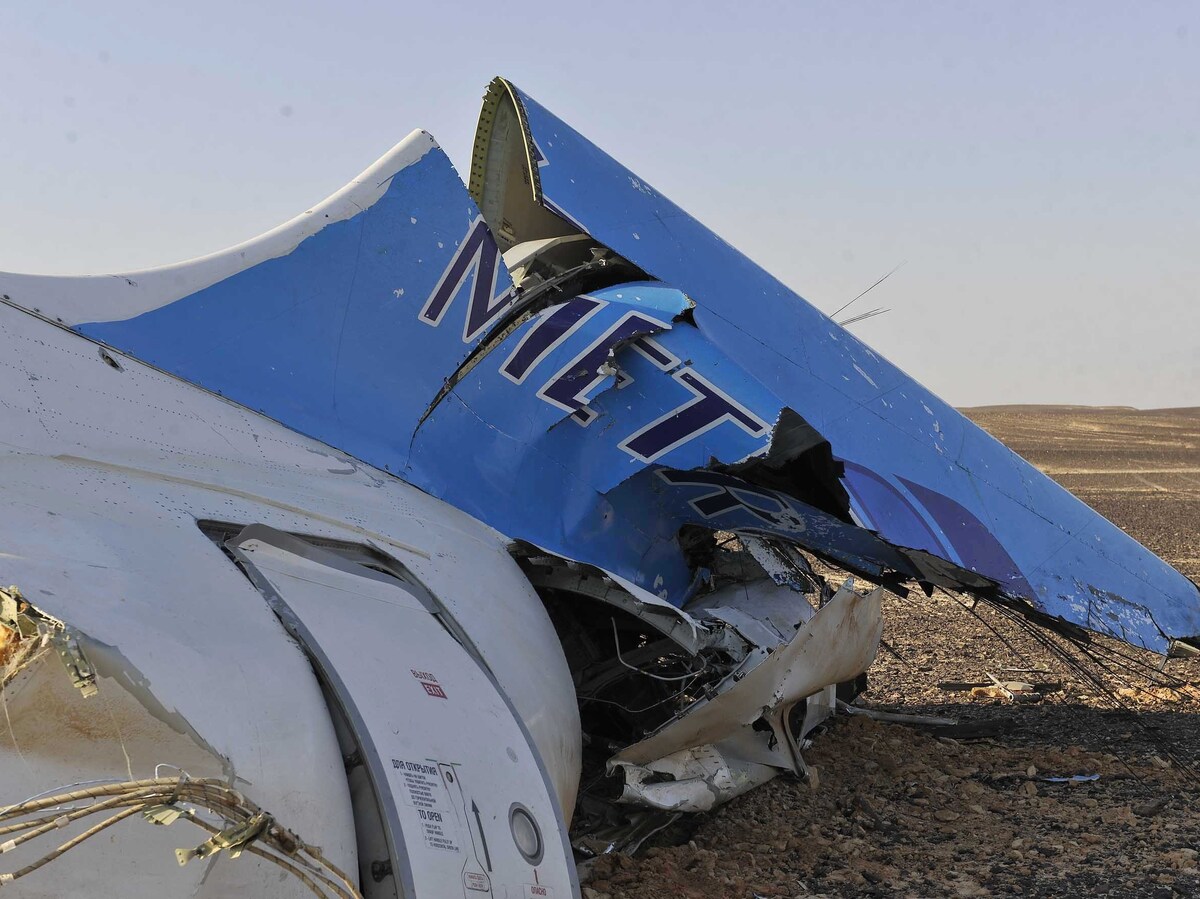 The Russian aircraft carrying 224 people crashed Saturday in a remote mountainous region in the Sinai Peninsula about 20 minutes after taking off from the Egyptian Red Sea resort town of Sharm el-Sheikh.

The Russian airliner that crashed Saturday in Egypt killing all 224 people onboard broke apart in flight, according to Russia's top aviation official.

The Airbus A321-200, bound for St. Petersburg, Russia from the Egyptian resort town of Sharm el-Sheikh plummeted "abruptly from 31,000 feet just 23 minutes" after it took off, according to The Associated Press. The news service said aviation experts and search teams are surveying an area of about six square miles looking for bodies and strewn parts of the plane. It adds:

"The large area over which fragments were found indicates that the jet disintegrated while flying high, said Alexander Neradko, head of Russia's federal aviation agency. He would not comment on any possible reason for the crash, citing the ongoing investigation.

"Neradko was in Egypt to inspect the crash site along with Russia's ministers of emergencies and transport.

"An Egyptian ground service official who carried out a preflight inspection of the plane said the aircraft appeared to be in good shape. Speaking on condition of anonymity because he was not authorized to speak to the media, he said he was a member of a technical inspection team that included two Russians." 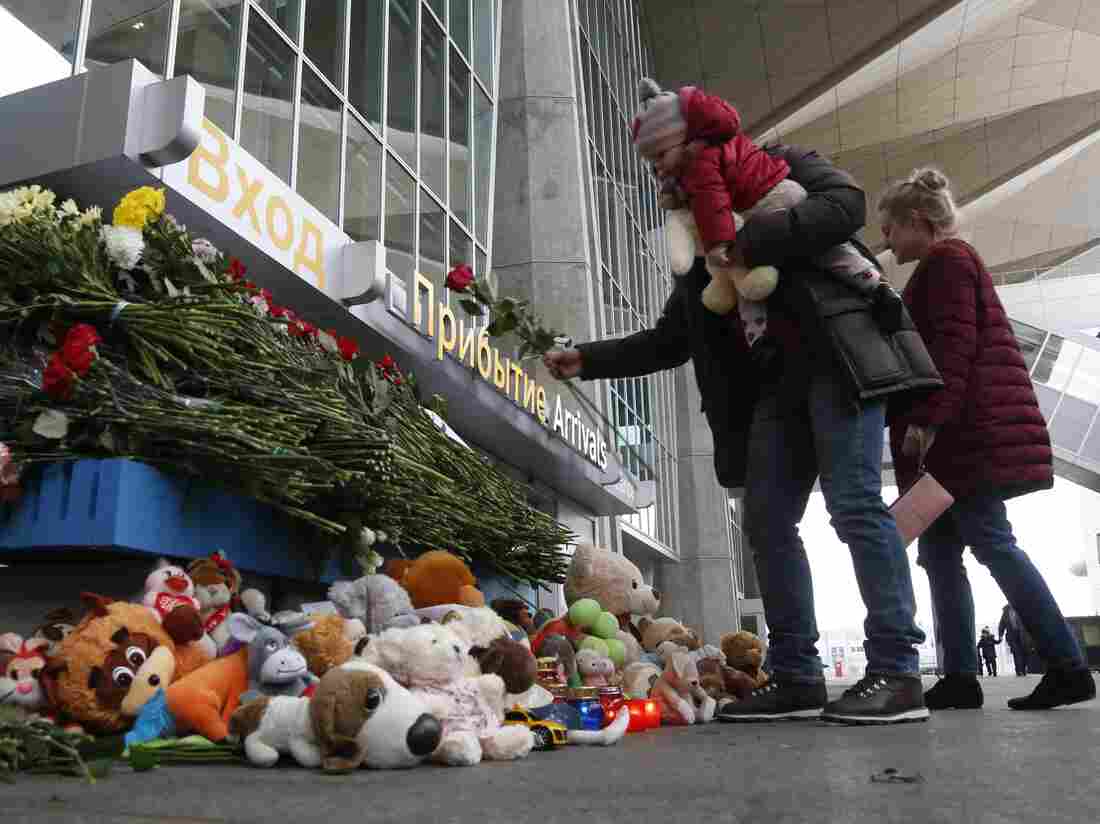 A family leaves flowers and toys at an entrance of Pulkovo airport outside St. Petersburg, Russia, during a day of national mourning for the plane crash victims. Dmitry Lovetsky/AP hide caption 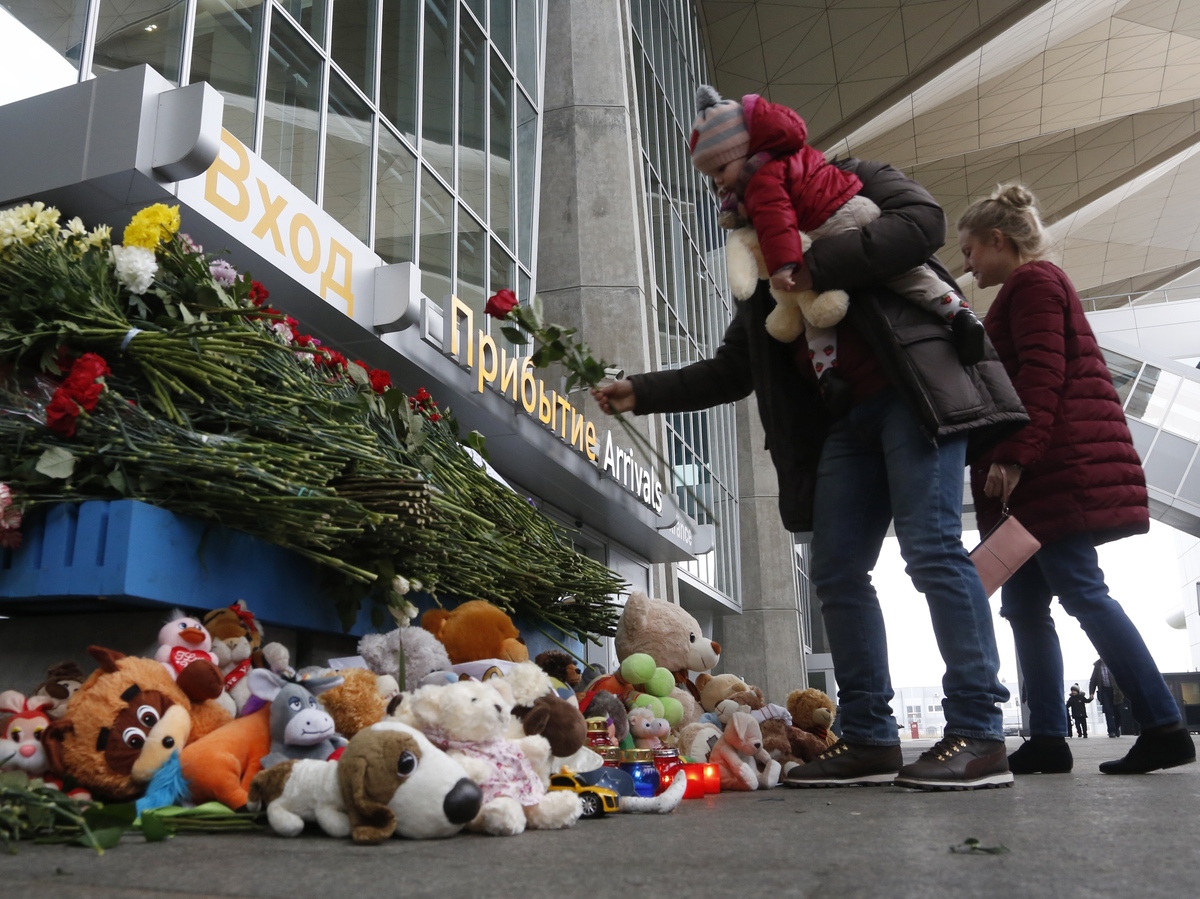 A family leaves flowers and toys at an entrance of Pulkovo airport outside St. Petersburg, Russia, during a day of national mourning for the plane crash victims.

Reporting from Moscow, NPR's Corey Flintoff tells our Newscast unit that Russia observed a day of mourning Sunday. He adds investigators continued searching for what caused the airliner, operated by Metrojet, to crash minutes after taking off.

"One big concern for investigators is whether the Metrojet airliner might have had mechanical problems. Experts say they tested a sample of fuel from the Russian airport where the plane got its last refueling. They say the fuel met all the standards for quality.

"Investigators are also looking into reports that crewmembers complained about mechanical problems on the aircraft in the week before the accident.

As we reported Saturday, Russian and Egyptian officials are rejecting claims the airliner was shot down by Islamist rebels.

The AP notes there are several possible causes of such a disintegration:

"A former safety engineer with Boeing says that when planes break up in mid-air it's usually due to one of three factors: a catastrophic weather event, a mid-air collision or an external threat, such as a bomb or a missile.

"Todd Curtis says if there are no indication that such events played a role in the crash, investigators will be looking at more unusual events, such as an on-board fire or corrosion that caused a structural failure."

The Guardian reports that additional teams from the governments of France and Germany and Russia have been sent to the crash site to assist the investigation. It adds the downed plane was designed in France, manufactured in Germany and operated in Russia.

"Russia's emergencies ministry has sent more than 100 workers to Egypt to help recover bodies and examine evidence. Staff from the French accident investigation agency, BEA, were also on assigned to the task because the Airbus A321-200 was designed in France.

"The agency said its team would be joined by two investigators from its German counterpart, the BFU, because the aircraft was manufactured in Germany, and four from its Russian counterpart, the MAK, because the plane was operated by a Russian company. They will join emergency services and aviation specialists already at the crash site, which is spread over more than 5.8 sq miles."

The United Arab Emirates airliners Emirates and Air Arabia announced Sunday they were ordering flights to steer clear of crash site on Egypt's Sinai Peninsula, according to Reuters.