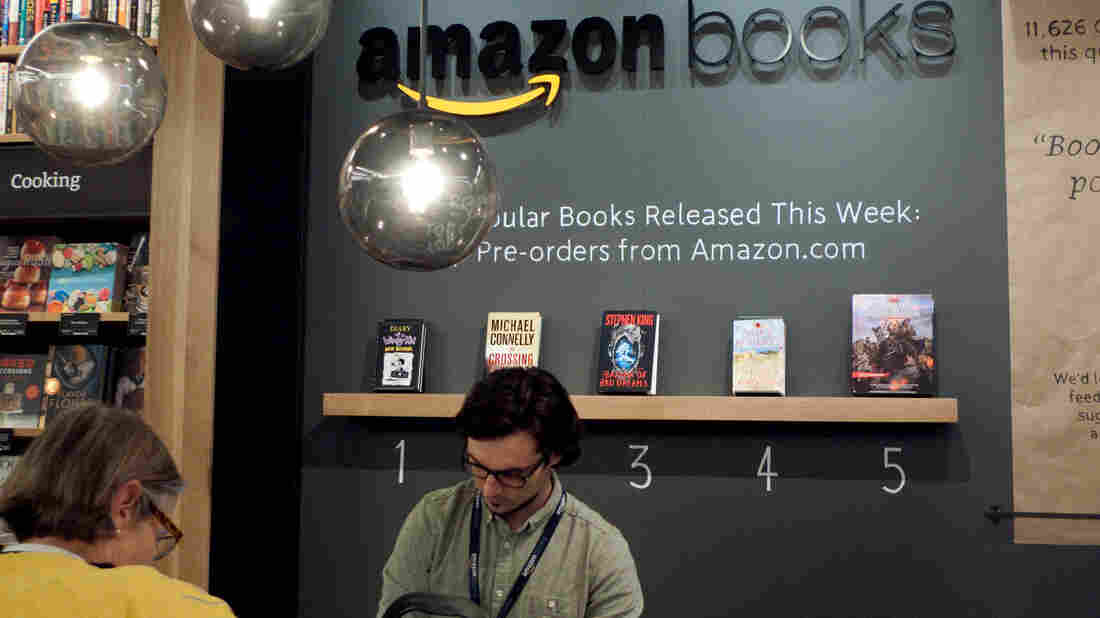 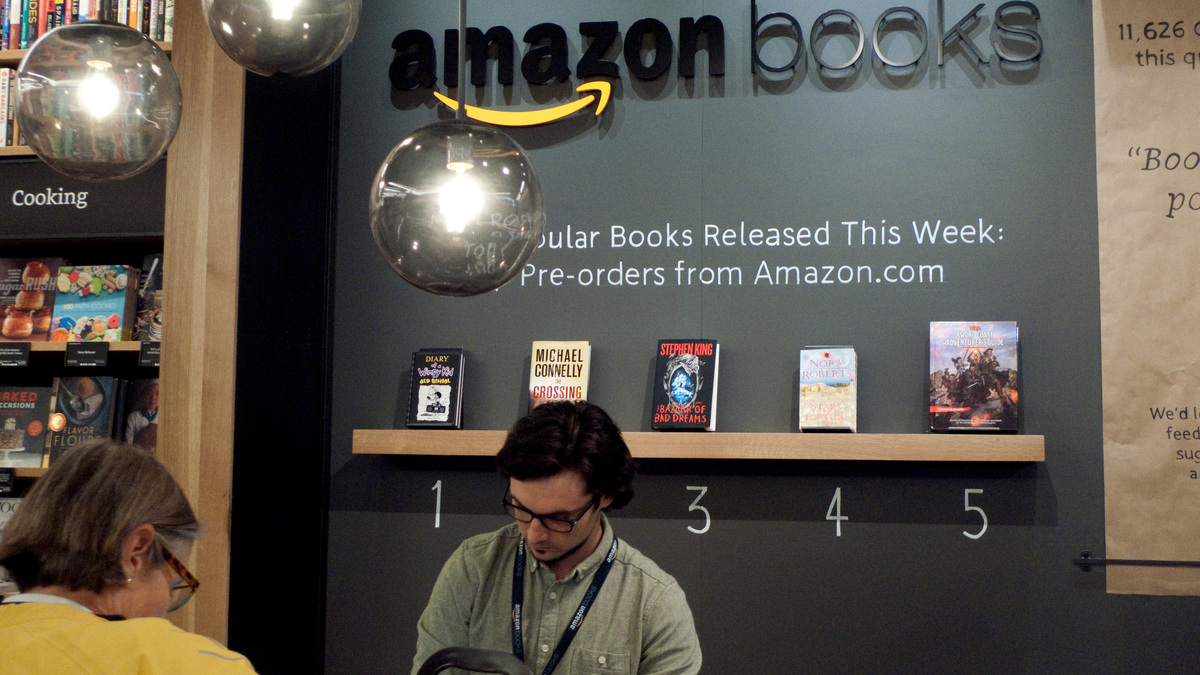 A clerk works the counter at Amazon Books, the retailer's first brick-and-mortar store that opened in Seattle Tuesday.

Browsing for a new book at Amazon now has a new meaning in Seattle, where instead of surfing the Web, customers can walk into the online retailer's first permanent storefront. Opening Tuesday morning, the shop shares a block with a Banana Republic and a Pottery Barn.

The news release touting Amazon Books' opening day also includes details that are unusual for the online retailer: the store's street address and details on where customers can park (in a garage).

Coming 20 years after Amazon's website went live, the brick-and-mortar Amazon Books seeks to build on the company's online strengths. After helping to create an age in which shoppers often check their phones for ratings or lower prices, Amazon has filled its bookstore with titles that have strong online reviews — and it says all the prices will be the same, on the Web or in the store.

"These are fantastic books! Most have been rated 4 stars or above, and many are award winners," according to a note from Amazon Books vice president Jennifer Cast announcing Tuesday's opening.

The store is tucked into a shopping center on the edge of the University of Washington's campus. Unlike large-footprint bookstores from Barnes & Noble or the now-defunct Borders, it takes up about 5,500 square feet — roughly a fifth the size of an average Barnes & Noble store.

Giving it the look of a traditional bookstore, Amazon Books has hardwood floors and wooden shelves; the children's book area is carpeted and furnished with cushy chairs. 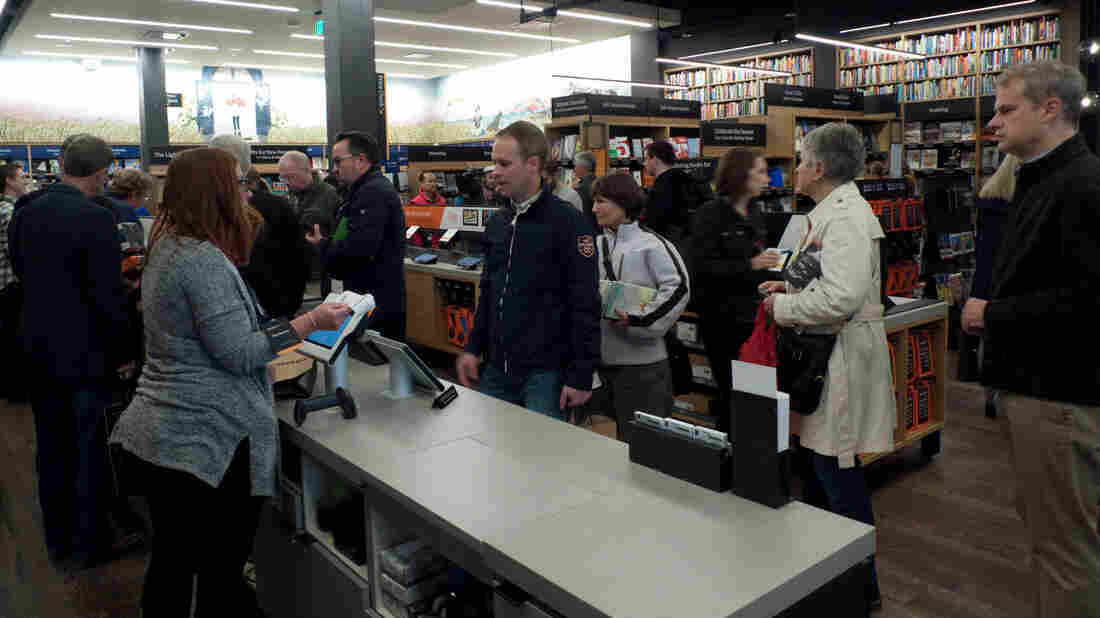 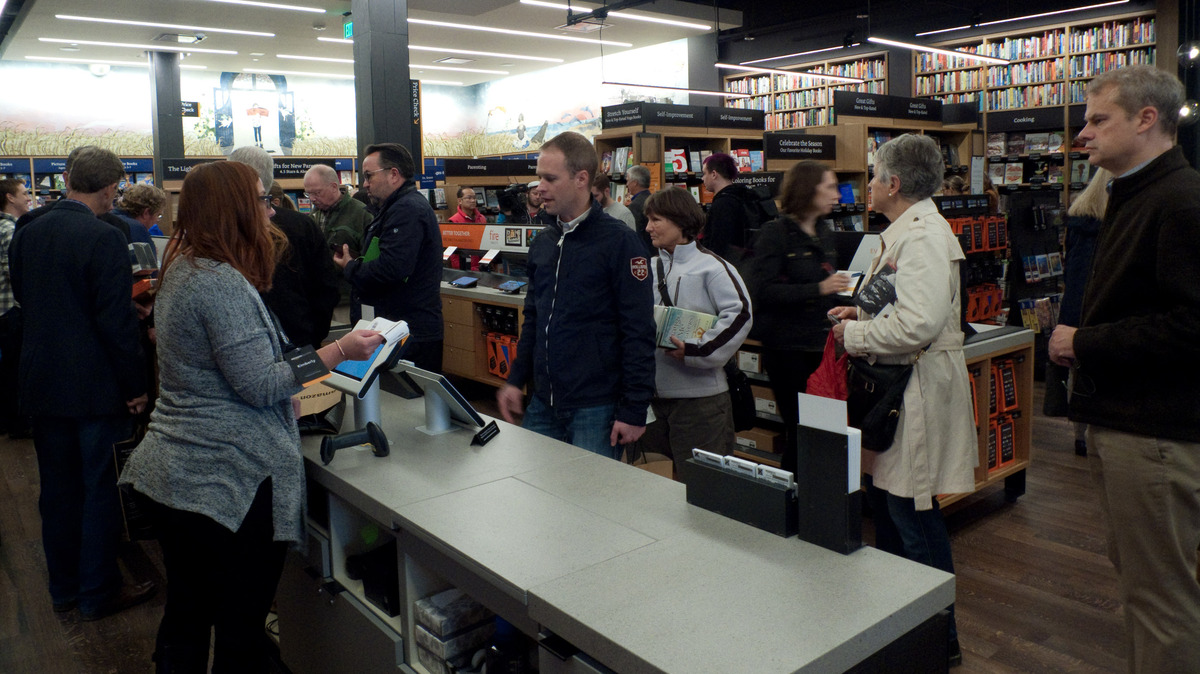 Proceed to checkout: At its new bookstore, Amazon's customers lined up to buy books in Seattle Tuesday.

Nearly all of the books are arranged to show their covers, rather than their spines. Below each book, online reviews are excerpted on cards that include a summary of the title's rating — the average number of stars, along with the number of reviews.

Elsewhere, books are grouped in ways that might seem familiar to Amazon.com customers who filter their search results: by rating, for example, as well as best-selling or popular pre-order titles.

The Amazon Books store will also incorporate elements that echo the experience of visiting an Apple Store, as it devotes space to letting customers "test drive" Amazon devices such as its Kindle reader, Echo controller and Fire TV.

Asked about other potential retail locations today, an Amazon representative didn't rule out the possibility that other stores could follow.

The store continues Amazon's forays into the concrete, rather than virtual world. Earlier this year, it launched its new Home Services business, offering everything from painting and cleaning to plant-munching goats.

Amazon says the new bookstore will be closed on two days each year: Thanksgiving and Christmas.

As The Seattle Times notes:

"There is some irony in Amazon's opening a physical store. For years, it could undercut physical retailers on price because it didn't have brick-and-mortar locations. But those stores offered something Amazon couldn't: the instant gratification of owning an item the second it was purchased, as well as the personal touch of a knowledgeable sales clerk."