Accessibility links
Researchers Reveal How Climate Change Killed Mars : The Two-Way Mars used to be much warmer and wetter than it is today. Scientists are unraveling the mystery of why it dried out. 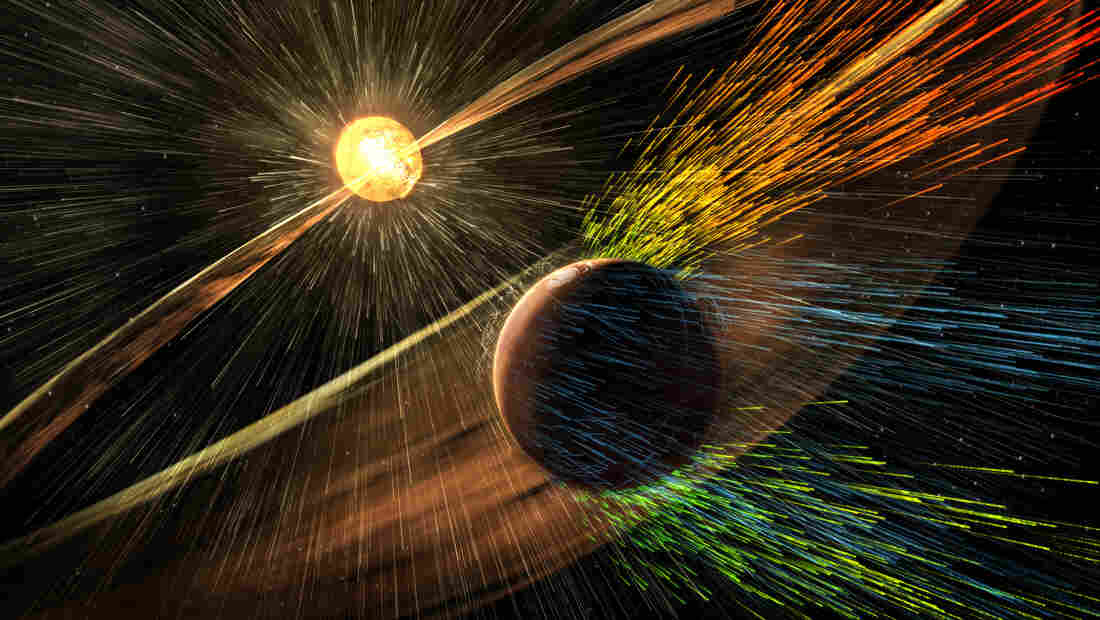 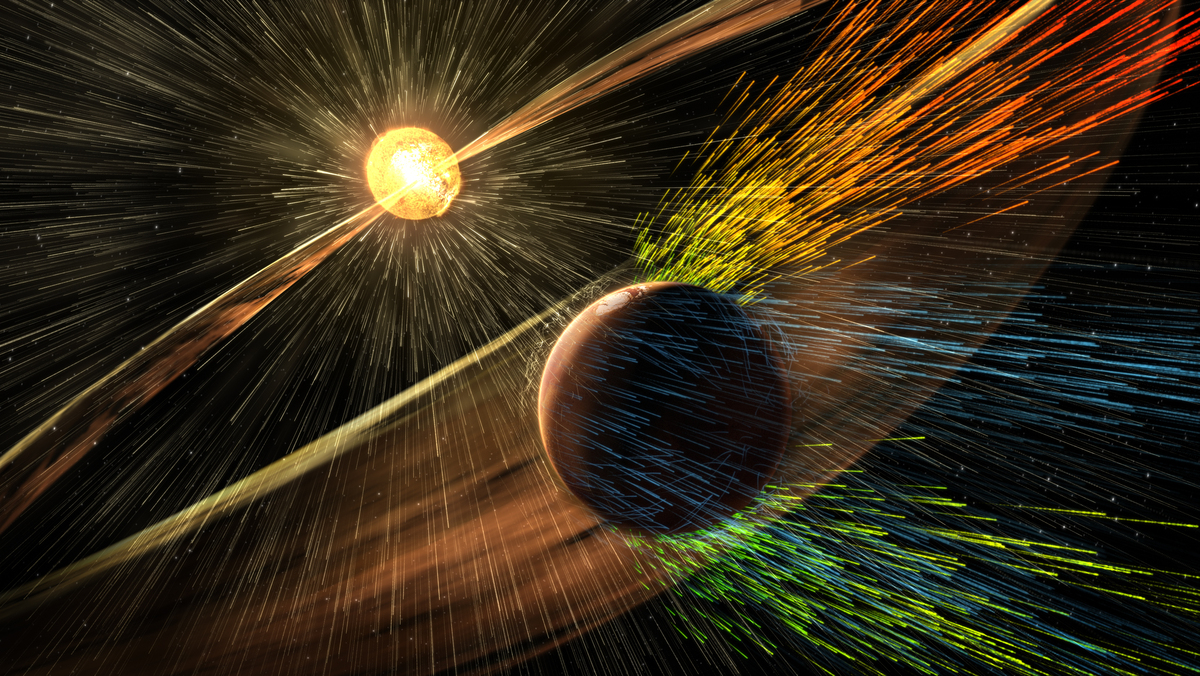 Solar storms from the sun send charged particles streaming towards Mars. Research now shows those particles are stripping away the atmosphere.

Climate change isn't just something to worry about here on Earth. New research published today shows that Mars has undergone a dramatic climate shift in the past that has rendered much of the planet inhospitable to life.

About 3.8 billion years ago, Mars was a reasonably pleasant place. It had a thick atmosphere filled with carbon dioxide that kept it warm. Rivers trickled into lakes across its surface. Some researchers think there might even have been an ocean.

"It seems to have been a much more clement climate, a climate more suitable to sustaining life at the surface," says Bruce Jakosky, a researcher at the University of Colorado, Boulder. 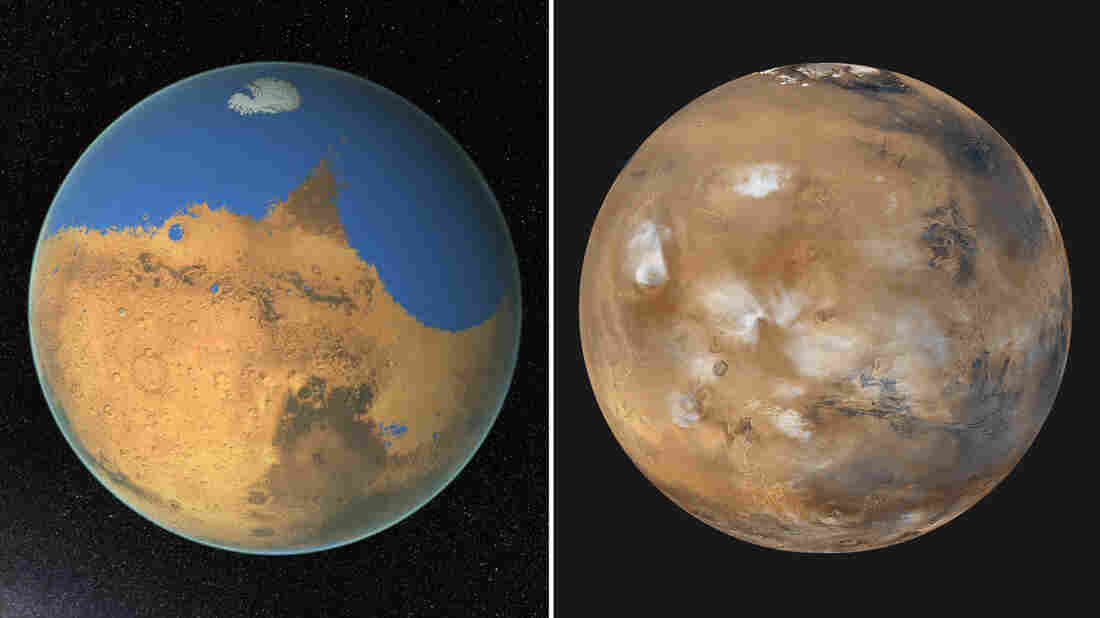 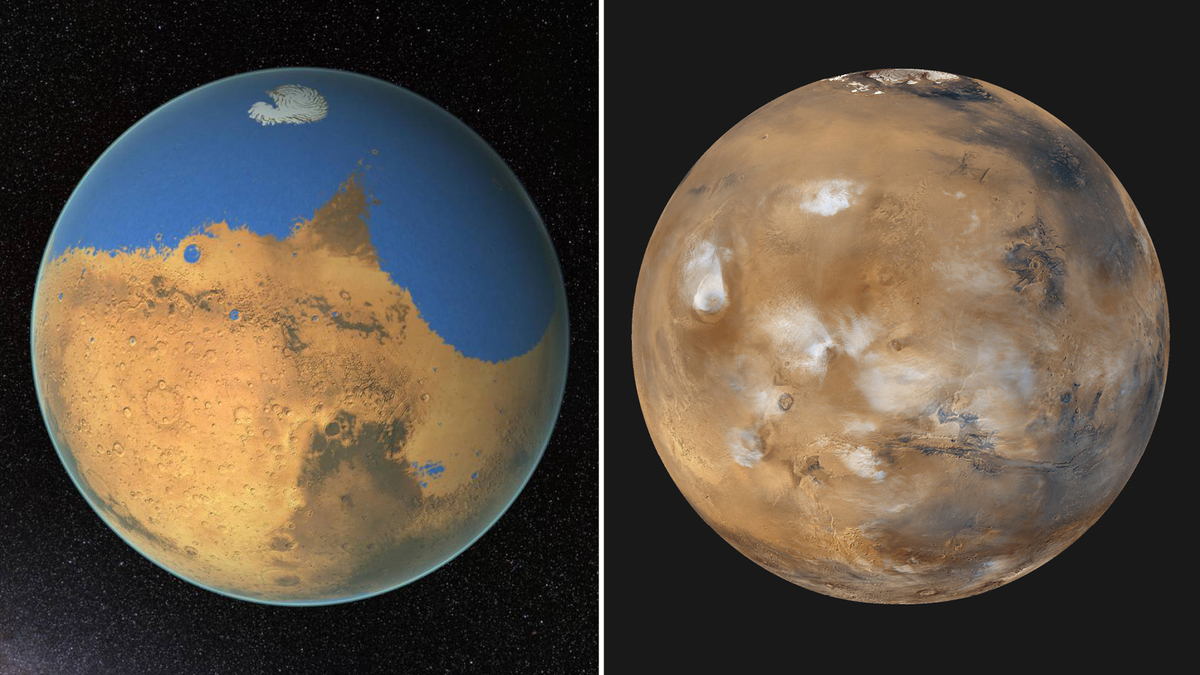 Nobody knows if there was life on Mars back then, but it's now a hostile place. The water's mostly gone. So is a lot of that cozy atmosphere. To try and find out what went wrong, Jakosky and other scientists have sent a spacecraft called the Mars Atmosphere and Volatile Evolution Mission, or MAVEN.

With each swing around Mars, MAVEN actually dips into the planet's atmosphere, gathering data. The results are published today in two journals — Geophysical Research Letters and Science — and they reveal something remarkable: Mars' atmosphere is actually leaking into space.

"It's leaving at a rate about 100 grams per second," Jaksosky says. "That doesn't seem like much, but you add it up over a couple of billion years and it's enough to remove the entire atmosphere."

The cause is our friendly neighborhood star, the sun. It's constantly shooting out high energy particles known collectively as the solar wind.

"[The wind] streams outward at a gas flow at about a million miles per hour," Jaksosky says.

On Earth, our magnetic field blocks the solar wind. Particles become tangled in it before they can ever reach our precious air supply.

There is no magnetic field on Mars, so when the solar wind reaches the Red Planet, the atmosphere gets stripped away.

This wasn't always the case. When Mars was warm and wet, it appears to have had a magnetic field, too. But that field ran out. Scientists think that's when the atmosphere and water began to bleed into space.

"It would have taken a couple of hundred million years," Jaksoky says.

"I think we are onto something new here with the MAVEN results," says Mike Liemohn, a planetary scientist at the University of Michigan.

Liemohn says there are still plenty of questions about what else happened to Mars atmosphere. Did a comet or asteroid impact blow part of it away? Did rocks on the surface suck vital gases? And perhaps most important of all: What happened to Mars's magentic field?