Accessibility links
U.S. 'Reasonably Certain' Terrorist 'Jihadi John' Was Killed In Drone Strike : The Two-Way "We know for a fact that the weapons system hit its intended target," Col. Steve Warren says. He adds that it will take time to make a formal declaration that the ISIS frontman was killed. 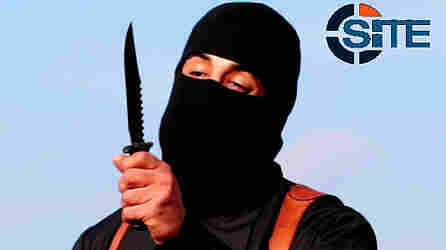 A U.S. drone aircraft used a Hellfire missile to hit a target that was believed to include Mohammed Emwazi, known as "Jihadi John," seen here in an image made from a militant video that has been verified by SITE Intel Group. AP hide caption

The U.S. is "reasonably certain" that the ISIS frontman known as "Jihadi John" has been killed by a drone strike in Syria, a Pentagon spokesman says. The U.S. attacked a vehicle that was believed to be carrying the British terrorist Thursday.

"We know for a fact that the weapons system hit its intended target," Col. Steve Warren says, "and that the personnel who were on the receiving end of that weapons system were in fact killed. We still have to finalize the verification that those personnel were specifically who we thought they were."

Describing the attack at a late-morning briefing Thursday, Warren said, "It was a drone strike using a Hellfire missile."

A video of the attack exists, Warren confirmed. He did not say when that video might be released.

The real name of the man who acted as a mouthpiece for the self-proclaimed Islamic State is Mohammed Emwazi. He has played key roles in grisly videos depicting the murder of Western hostages held by ISIS.

Noting Emwazi's public status, Warren said the British citizen "wasn't a major tactical figure, or an operational figure." But Warren also noted that Emwazi has been a major part of ISIS's recruiting efforts. And he noted "the absolute barbarism" that Emwazi displayed in infamous videos.

"I mean this guy was a human animal," Warren said, "and killing him is probably making the world a little bit better place."

Emwazi came under attack on Thursday. Citing an anonymous source, The Associated Press says that a drone fired on his vehicle in an ISIS stronghold in Syria.

"We had been following this target for some time," Warren said. "The intelligence indicators that we had gave us great confidence that this individual was Jihadi John. And then when the opportunity presented itself ... for minimal civilian casualties, we took the shot."

In the initial hours after the attack, Defense Department officials would say only that they were working to assess the result of the operation. Warren says that effort is continuing.

Emwazi's identity became public earlier this year. He was born in Kuwait, grew up in London and reportedly studied computer programming in college, as we reported in February. He was publicly identified months after he appeared in a video about the killing of ISIS hostage James Foley, a U.S. journalist.

In addition to Foley, Emwazi is believed to have appeared in videos about the killings of Britons David Haines and Alan Henning, Americans Steven Sotloff and Peter Kassig (who changed his first name to Abdul-Rahman during his captivity), and two Japanese hostages, Kenji Goto and Haruna Yukawa.

Emwazi is said to have been killed in Raqqa — the same city in northern Syria where aid worker Kayla Mueller of Arizona was reportedly killed in an airstrike this past February. In September, escaped captives said they believed Mueller had been killed by ISIS.

Reacting to the news today, the parents of James Foley issued a statement that reads in part:

"It is a very small solace to learn that Jihadi John may have been killed by the U.S. government.

"His death does not bring Jim back. If only so much effort had been given to finding and rescuing Jim and the other hostages who were subsequently murdered by ISIS, they might be alive today.

"Our focus is on Jim's life and all the good that he did in the world. We remain humble and proud of his unwavering commitment to give voice to the voiceless as a journalist, a teacher and a friend."