Accessibility links
Myanmar Is Also Known As Burma, But We Won't Keep Repeating That : The Two-Way For years, it's been NPR's style to say that Myanmar is "also known as Burma" at the start of reports about that nation. We don't think that's necessary anymore. 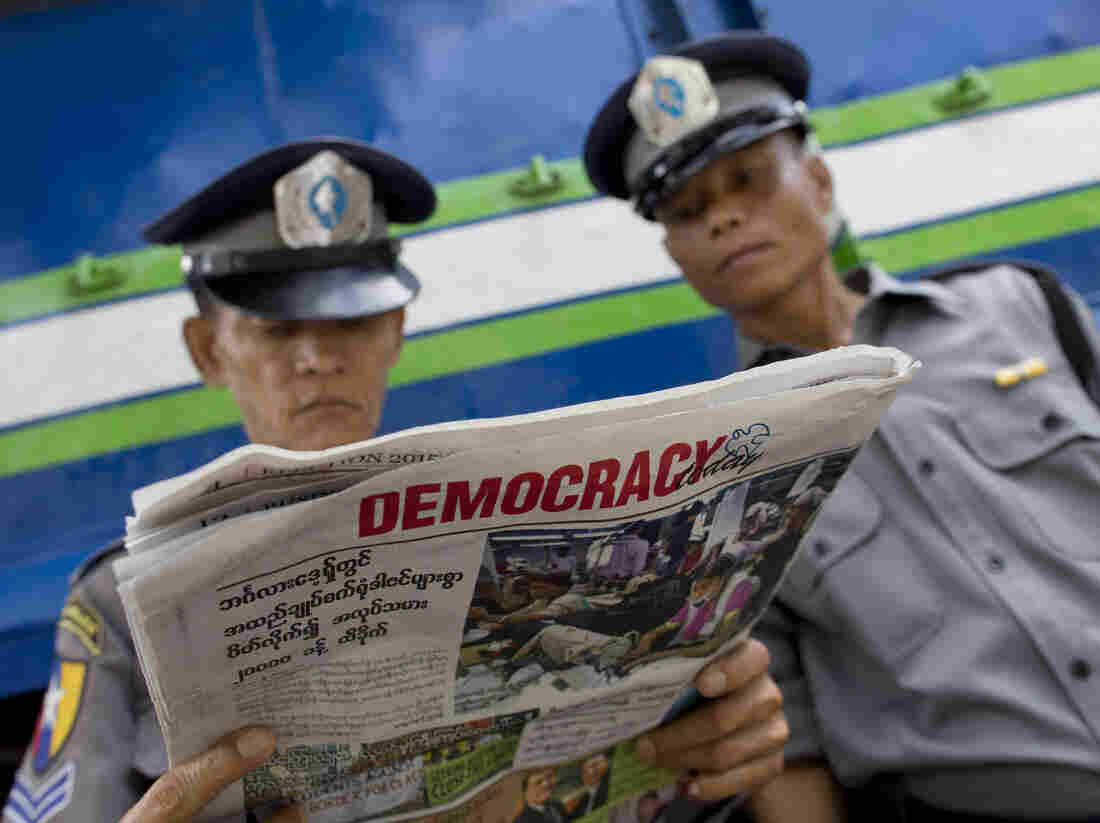 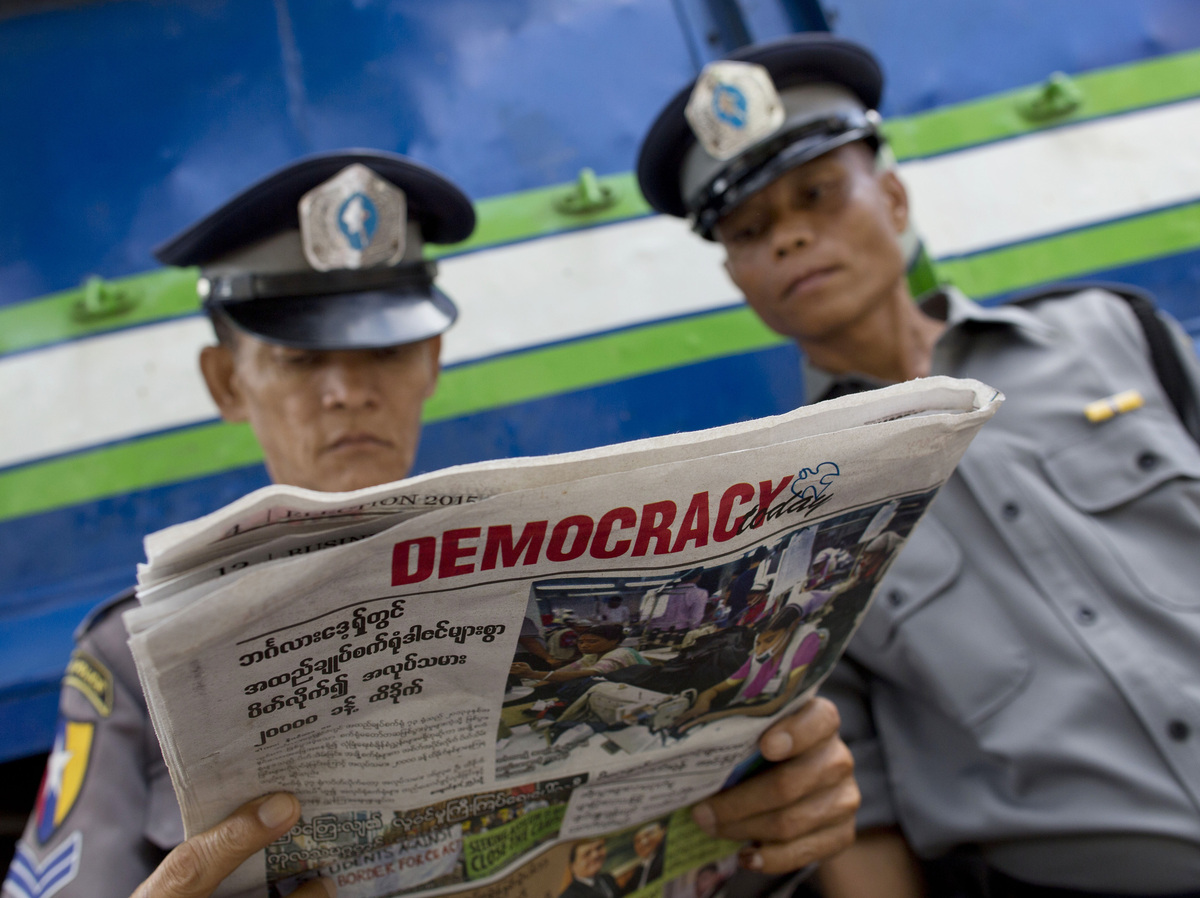 For several years now, the emails have shown up within hours — sometimes within minutes — after NPR posts or broadcasts news about one Southeast Asian nation.

They would say something such as this:

Please stop telling us Myanmar is "also known as Burma." We get it!

We have news. This past week, NPR adjusted the guidance it gives to its journalists about how to refer to that nation. The new advice:

"When reporting about or from Myanmar, it is no longer necessary to say at the top that it is 'Myanmar, also known as Burma,' as our style has been since 2011. We feel there are very few in the audience who still need that immediate reminder."

We're not forgetting that the country is known by two names. NPR will note that Myanmar is "also known as Burma" when editors think a reminder makes sense. That's likely to be the case in longer reports that dig into the nation's recent history. We're also not dismissing the political overtones associated with the names "Myanmar" and "Burma" (more on that below).

News organizations such as NPR think about many things when they weigh whether the names of nations, regions or cities need "also known as" clauses such as those that have been linked to Myanmar since 1989. That's the year ruling generals declared that "Burma" was no longer the country's official name.

-- Is the audience more likely to recognize the "old" name than the "new" one?

-- How often is this place in the news?

-- Are the names "loaded" because they're being championed by one political group or another?

"Burma" is a name that many in an American audience would recognize. That helped make the case for an "also known as" reminder. NPR editors assumed it would help people locate Myanmar in their minds.

From a U.S.-based news organization's perspective, Myanmar is not constantly in the news. While it may have seemed to some NPR listeners as if we were continually telling them the country was "also known as Burma," there were weeks or months when there weren't reports from there. The case could be made that the reminders were necessary because Myanmar didn't come up that often.

Finally, there were those political overtones. The people of Myanmar weren't asked by the ruling generals whether they wanted the country's official name changed. Democracy activists there, such as Aung San Suu Kyi, objected to the change. As the State Department says, "It remains U.S. policy to refer to the country as Burma in most contexts."

For a news outlet to say the nation is "Myanmar" and not add that it's also known as Burma might have made it look as though that news outlet was siding with the generals and the leaders they installed. For more than two decades, Myanmar's leaders have jailed political prisoners and quashed dissent. They haven't been a group that objective news outlets wanted to appear to be supporting.

Why change our guidance now?

Political reforms have begun in Myanmar, and Suu Kyi's party just won a majority of seats in parliament. But Human Rights Watch and other organizations say all is far from well. "The number of political prisoners is on the rise with arrests of students, farmers, and community activists for peaceful protests," Human Rights Watch reports.

NPR's Anthony Kuhn noted this week that "despite some political reforms over the past five years, 25 percent of the seats in parliament are still reserved for unelected military lawmakers. Even if the opposition wins, that will make it tough for them to push for further reforms."

It's not the political changes in Myanmar that have prompted the change. It's three other things:

-- A sense that our audience is well aware that Myanmar is also known as Burma. After all, Myanmar is no longer an unfamiliar name and it is how the nation is known around the world. Even the U.S. government has relaxed and begun using "Myanmar."

-- We report about the world as it is. The nation is officially known as Myanmar. We can remind people that it is also known as Burma, and we will continue to do so when we feel it's appropriate, but it's not always necessary to immediately point that out.

-- "Myanmar" is not a name that came from nowhere. "Both names have long been used in the Burmese language, and vary from a common term," the Los Angeles Times wrote in 2012. "Myanmar is seen as more formal or literary and Burma, more vernacular."

News organizations have been through this before. China's communist leaders began referring to "Peking" as "Beijing" in the late 1950s. Twenty years later, news outlets such as The New York Times were still using "Peking" when reporting about China's capital. But as China opened to the rest of the world, "Beijing" gradually became the accepted name.

Other name changes have made their way into common use more quickly. "Leningrad" returned to its pre-communist-era name "St. Petersburg" in 1991. News outlets quickly made the switch, likely because they concluded that readers and listeners would have been relatively familiar with the "new" name, because it was actually an "old" one.

Our guidance on how to refer to Myanmar might change again, of course. There's the chance "Burma" could become the nation's official name again if reform efforts truly take hold. If that happens, we may need to say "Burma, also known as Myanmar," for a time.