Accessibility links
Latest On Paris Attacks: Police Search For A New Suspect, Say There Could Be More : The Two-Way Police have announced there is a ninth suspect. Belgium canceled a football match and raised its security alert. Meanwhile, Secretary of State John Kerry met with French President François Hollande.

0:40
Latest On Paris Attacks: Police Search For A New Suspect, Say There Could Be More 0:40

Latest On Paris Attacks: Police Search For A New Suspect, Say There Could Be More 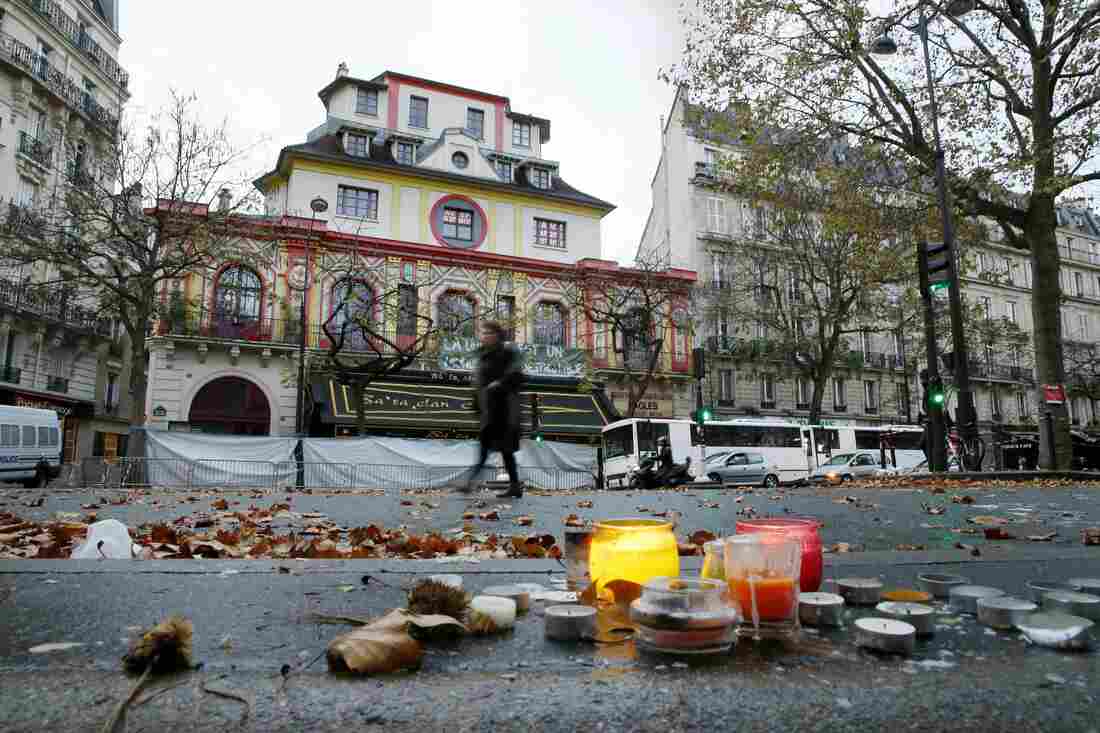 A woman walks past the Bataclan theater in Paris on Tuesday. At least 82 people were killed in the theater during coordinated attacks on Friday. Patrick Kovarik /AFP/Getty Images hide caption 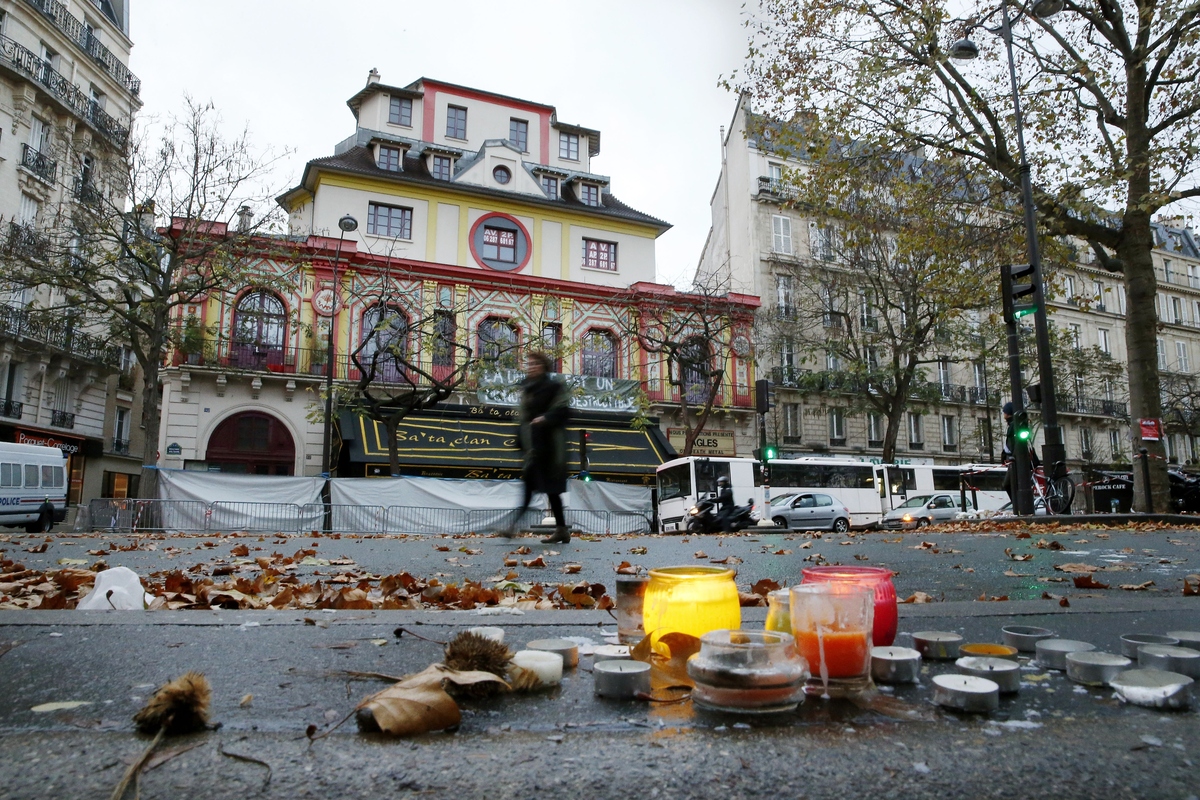 A woman walks past the Bataclan theater in Paris on Tuesday. At least 82 people were killed in the theater during coordinated attacks on Friday.

On the final day of national mourning, Paris is still trying to regain a sense of normalcy, after a series of coordinated terrorist attacks Friday left 129 people dead.

It's hard, NPR's David Greene reports. For example, he met 23-year-old Anne Sophie Pratta, who was making her way back to her apartment Monday night.

She said when she got on the train, everyone was looking at each other.

"It was very frightening to take the train today," she said. "We didn't want to move, we just wanted to stay home. It's worrying and in the cab, the guy told me I was the first client to smile today because everyone else was very sad."

With that, here's the latest on the investigatory and other fronts:

-- Authorities are still on the hunt for an eighth suspect they have named as Sala Abdeslam, and another whose name they have not released.

-- Federal Police in Belgium released a new picture of Abdeslam, canceled a football game and raised its terror alert to indicate a "possible and credible threat."

-- Secretary of State John Kerry met with French President François Hollande in Paris on Tuesday. NPR's Michelle Kelemen reports Kerry vowed to destroy the Islamic State and said he thinks that the international community is weeks away from a "big transition in Syria."

"The faster Russia and Iran and others give life to this process, the faster the violence can taper down and we can isolate [ISIS] and Al Nusra and begin to do what our strategy has always set out to do."

We'll update this post throughout the day, so make sure to refresh the page for the latest.

NPR's Dina Temple-Raston reports that police have said they are searching for a new suspect. That brings the total of those involved to nine: the seven men who died in the attack, 26-year-old Salah Abdeslam and this other new suspect. Dina adds that sources told NPR that they believe the plot is even wider and that it could involve more than a dozen people. She notes that they are still piecing this all together.

Update at 3:10 p.m. ET. France And England Friendly Kicks Off In London

The national soccer teams of France and England kicked off their friendly match in London's Wembley stadium at 3 p.m. ET. It is being televised on Fox Sports 1. Before the match, wreaths of flowers the colors of the French flag were placed on the field and the crowd joined in the singing of France's national anthem. Players from both teams also gathered in a circle at midfield for a moment of silence before the opening whistle.

"Tonight is more about solidarity than football," 31-year-old England fan Robert Williams told the Associated Press. "It is about remembering the people that have lost their lives in such tragic circumstances."

The European Union unanimously approved France's request for assistance in its fight against the Islamic State.

France invoked Article 42-7 of the European Union charter, which says if one member of the union is attack, all the others will have its back.

"It's an article that has never been used before in the history of our union," Mogherini said, referring to part of the EU treaties that provides for solidarity of member states in the event one of them is attacked.

"'Today the EU through the voices of all the member states unanimously expressed its strongest full support and readiness to give the assistance needed,' she told a press conference in Brussels with French Defence Minister Jean-Yves Le Drian.

"'France will be in contact bilaterally in coming hours and days to express the support it requires and the EU will ensure the greatest effectiveness in our common response,' former Italian foreign minister Mogherini added."

"This visit will underscore the friendship and solidarity between the United States and France, our oldest ally," Press Secretary Josh Earnest said in a statement. "President Obama and President Hollande will consult and coordinate our efforts to assist France's investigation into these attacks, discuss further cooperation as part of the 65-member counter-ISIL coalition, and reiterate our shared determination to confront the scourge of terrorism."

Citing the Russian government, Reuters reports that Hollande will meet with Russian President Vladimir Putin on Nov. 26 in Moscow.

NPR's Arnie Seipel reports that the number of governors who oppose taking refugees is up to 26 this morning.

New Mexico Gov. Susana Martinez and Gov. Terry Branstad of Iowa are the latest to say they oppose taking in Syrian refugees.

Arnie reports: "Branstad had originally said yesterday that he wasn't sure what authority he had to block refugees, and then came out later to say 'Until a thorough and thoughtful review is conducted by the intelligence community and the safety of Iowans can be assured, the federal government should not resettle any Syrian refugees in Iowa.'"