Accessibility links
Live Blog: Siege In Paris Ends With At Least 2 Dead, 8 Suspects Arrested : The Two-Way Residents of the Paris suburb of Saint-Denis began hearing gunfire and explosions starting at 4:00 a.m. The operation targeted the mastermind of the attacks that left 129 dead. 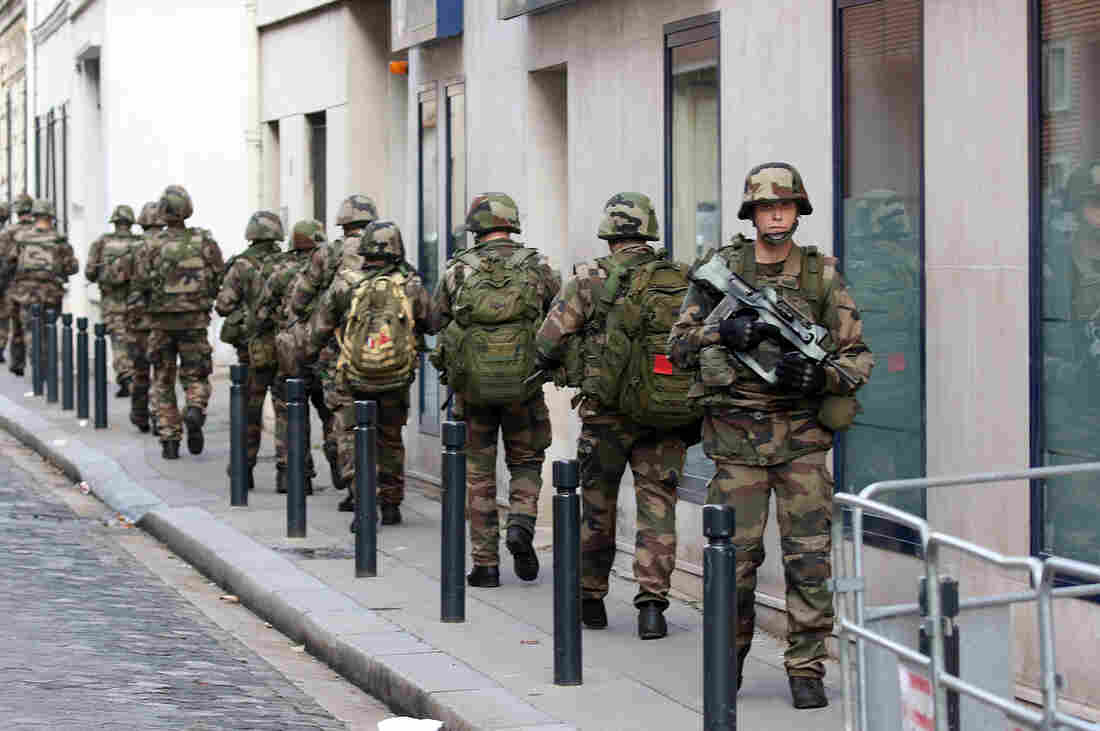 Soldiers patrol a street of Saint-Denis, a suburb of Paris, on Wednesday. Special forces raided an apartment, hunting those behind the attacks that claimed 129 lives in the French capital on Friday. Pierre Suu/Getty Images hide caption 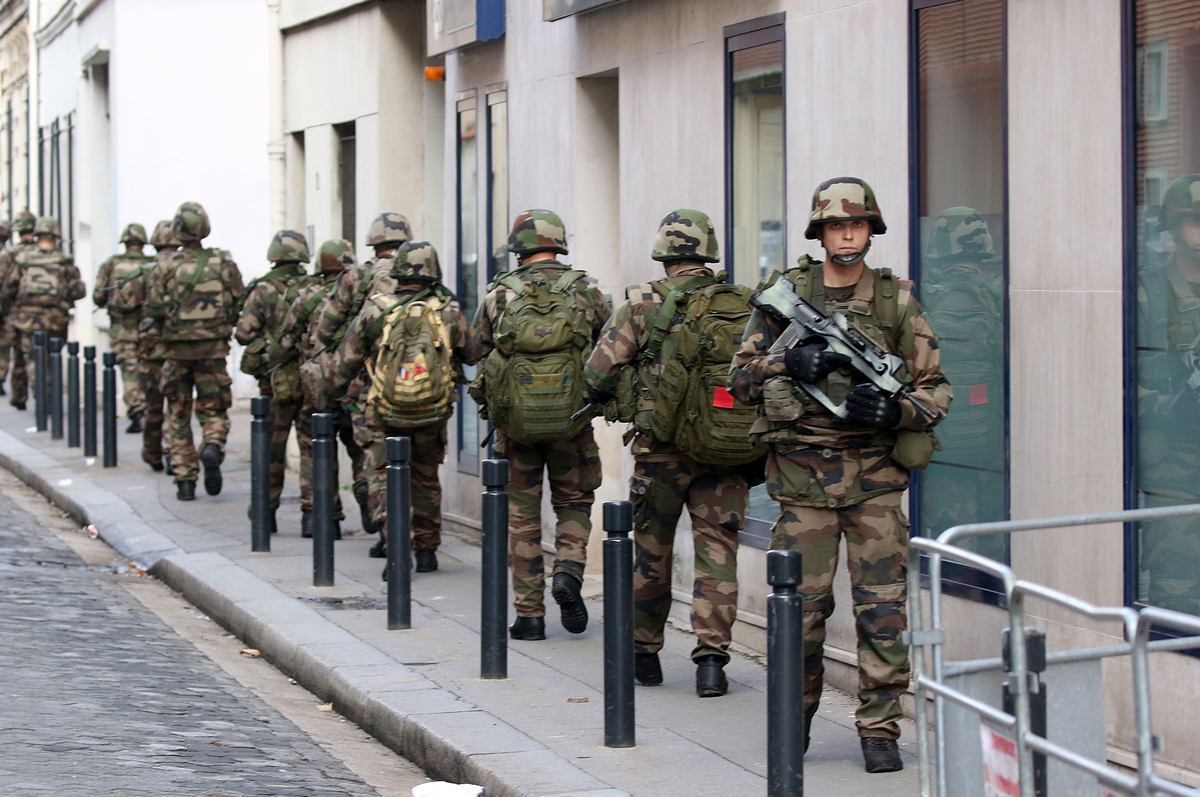 Soldiers patrol a street of Saint-Denis, a suburb of Paris, on Wednesday. Special forces raided an apartment, hunting those behind the attacks that claimed 129 lives in the French capital on Friday.

A huge and violent police operation in the Saint-Denis suburb of Paris is over. At least two people are dead and eight people were arrested, in an operation that authorities say stopped a terrorist cell that could have attacked again.

According to François Molins, chief prosecutor of France, Abdelhamid Abaaoud, who police believe orchestrated the attacks on Paris, may have been in one of the apartments targeted by the raid.

Molins said one person — presumed to be a woman — died after detonating a suicide vest and another "terrorist" was killed during the confrontation with police. Because of the explosions, police are still not sure if only two people died. Molins said they are trying to identify those remains, but he said that Abaaoud and Sala Abdeslam, another suspect police believe was directly tied to the attacks, were not among those arrested.

In a speech to French mayors earlier in the day, President François Hollande said the operation was intended to "neutralize terrorists" with connection to the attacks of last week.

"These acts show once again that we are at war," Hollande said. "At war against terrorism, terrorism, which declared war on us."

The operation started at around 4 a.m. Paris time, when explosions and gunfire could be heard near two apartments in Saint-Denis.

"They were shooting for an hour. Nonstop. There were grenades. It was going, stopping. Kalashnikovs. Starting again," Amine Guizani, who witnessed the raid, told French media.

The mayor of Saint-Denis said public transport was closed and schools in the center of town would not hold classes on Wednesday.

As we've been reporting, authorities across Europe have been on the hunt for two suspects they believe were directly involved the series of terrorist attacks that left 129 people dead.

We'll update this post as we receive information, so make sure to refresh this page for the latest.

Update at 2:23 p.m. ET. Two Main Suspects Not Among Those Arrested:

During a press conference a short while ago, François Molins, chief prosecutor of France, said that the two main suspects being sought by authorities were not among those arrested during an early morning raid on Wednesday.

The means the fate of Sala Abdeslam, whom they say rented cars and safe houses along with his brother who was killed, and Abdelhamid Abaaoud, who authorities believe has been the architect of Islamic State attacks across Europe, is still unknown.

Here are other revelations from Molins' press conference:

-- Police are still trying to identify two of the seven terrorists who were killed on Friday.

-- This was a "professional" job, Molins said, with lots of logistics, including three rented vehicles, three safe houses and "operational commanders."

-- The operation, Molins said, stopped a team of terrorists who coudl have "moved to act."

-- Police found a cellphone outside the Bataclan concert hall. The person using the phone texted "Here we go. We are starting." around the time the attacks started. Investigators are still trying to determine who received that text.

-- The operation this morning was "complex." Police fired 5,000 rounds and the shootout lasted more than an hour.

-- Eight people were arrested, seven men and one woman. Police are still determining their identities.

-- All this information, Molins warned, is "tentative."

During a speech Wednesday, French president Francois Hollande said that life should "carry on."

"What would France be without its museums, without its terraces, its concerts, its sports competitions?" he said, according to ABC News. "France should remain as it is. Our duty is to carry on our lives."

Part of that carrying on, he said, means respecting the country's commitment to take in refugees: "30,000 refugees will be welcomed over the next two years," he said.

In their most extensive statement since the attacks on Friday, the band Eagles of Death Metal say they are home safe.

"We are horrified and still trying to come to terms with what happened in France," the band said.

The band was playing a show at the Bataclan Theater when gunmen opened fire. When it was all done, 89 people were killed.

The band said that they have put all their scheduled shows on hold. They closed with: "Vive la musique, vive la liberté, vive la France, and vive [Eagles of Death Metal."

In a statement, Interior Minister Bernard Cazeneuve said that since France instituted a state of emergency, authorities had conducted 414 searches, arrested 64 people and confined 118 people to their homes.

NPR's Dina Temple-Raston reports that French authorities have been very worried about a follow-on attack.

"They had credible evidence that something was in the offing," she reports. But it is unclear if this operation eases some of those concerns.

French national police say that a seven-year-old Belgian Malinois named Diesel was killed during the raid in Saint-Denis.

They tweeted this photo:

NPR's Eleanor Beardsley reports that she just saw a series of police officers in tactical gear pull out of Saint-Denis. Ten of the vehicles were filled with masked men.

"It was a stunning show of force," Eleanor reports.

But, she said, it made clear that the operation that had started in the early morning hours had ended.

In a speech to the country's mayors, French President François Hollande described today's operation as intended to "neutralize terrorists" with connection to the attacks of last week.

"These acts show once again that we are at war — at war against terrorism, terrorism, which declared war on us," Hollande said.

The French president again blamed the Islamic State for the attacks, saying they have proven to have an army, financial support, territory as well as allies "in Europe, including in our country with young, radicalized people."

As NPR's Soraya Sarhaddi Nelson has some background on Abdelhamid Abaaoud the alleged mastermind behind the Paris attacks:

He is a Belgian national in his late 20s who is believed to be close to ISIS leader Abu Bakr al Baghdadi.

Counter-terrorism officials say he may be the link between the group's senior leaders and operatives in Europe. He is the suspect behind a terror cell police broke up in eastern Belgium in January and he's linked to the foiled attack aboard a Thalys train headed to Paris last August.