Accessibility links
Jared Fogle Sentenced To 15 Years In Prison For Sex With Minors, Child Pornography : The Two-Way A plea deal was reached in August, with the former Subway pitchman admitting to crossing state lines to pay to have sex with minors and receiving child pornography from the head of his charity.

Jared Fogle Sentenced To 15 Years In Prison For Sex With Minors, Child Pornography

Jared Fogle Sentenced To 15 Years In Prison For Sex With Minors, Child Pornography 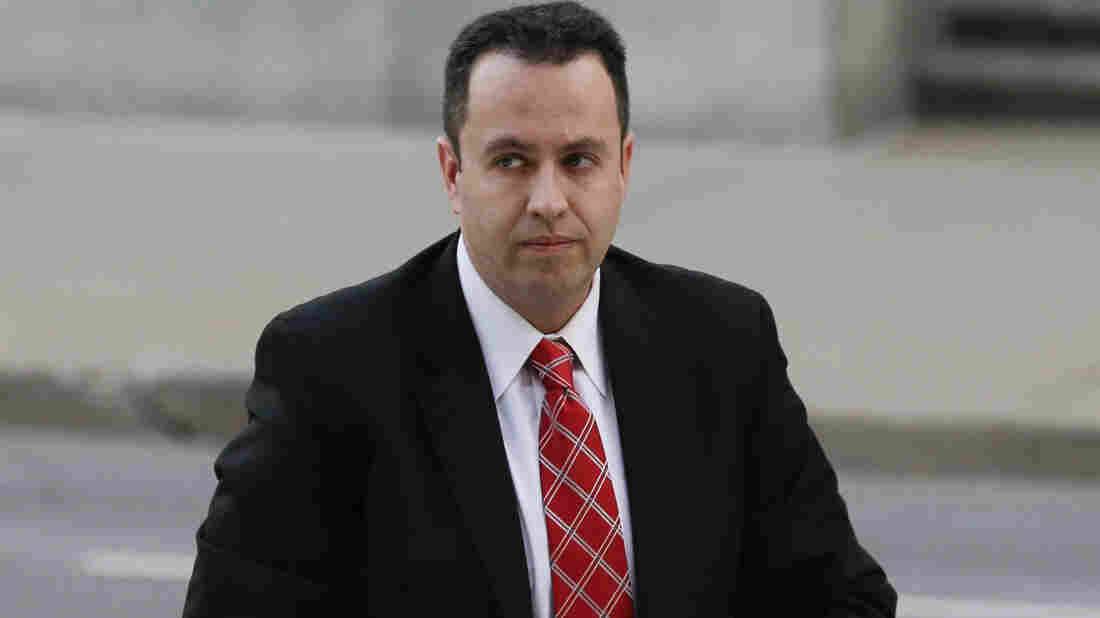 Former Subway pitchman Jared Fogle arrives at a federal courthouse in Indianapolis on Thursday to be sentenced on charges of trading child pornography and paying to have sex with minors. Michael Conroy/AP hide caption 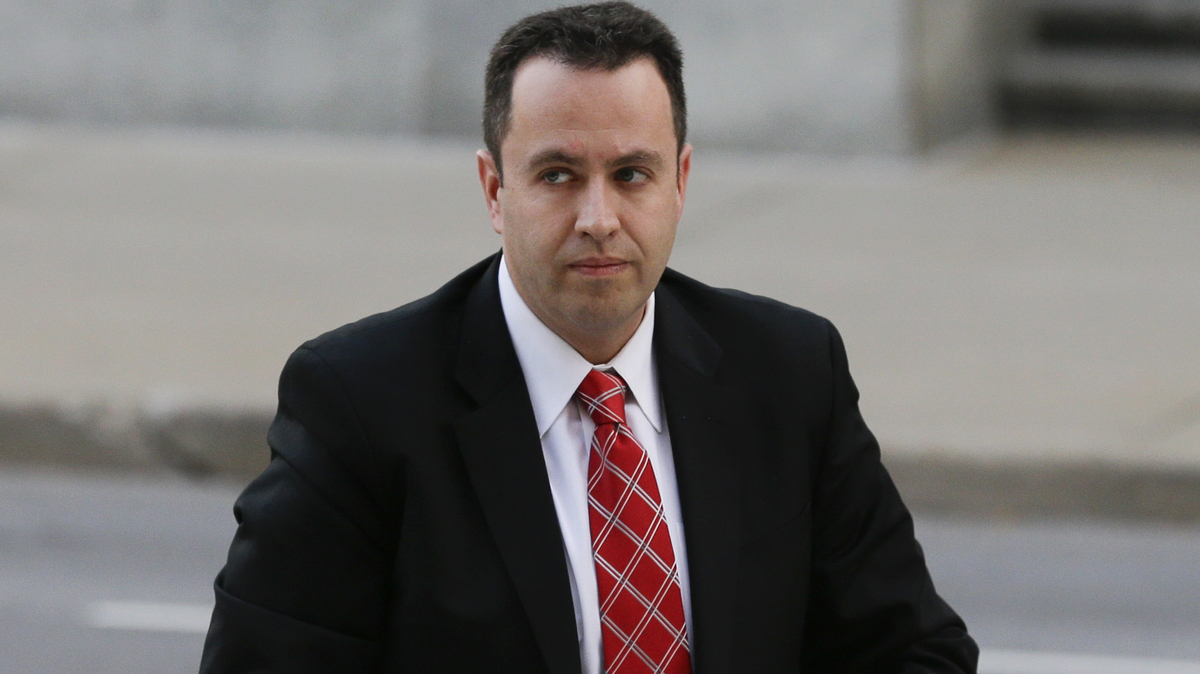 Former Subway pitchman Jared Fogle arrives at a federal courthouse in Indianapolis on Thursday to be sentenced on charges of trading child pornography and paying to have sex with minors.

The case involved interstate travel to pay minors for sex, as well as at least 400 child pornography videos — many of which Fogle received from the head of his charity, prosecutors said at today's hearing.

Fogle was sentenced to 188 months on each count, to be served concurrently. That amounts to just over 15 and a half years.

The sentencing hearing started at 9 a.m. ET and lasted more than four hours. We've updated this post with news from the courthouse, relying on local news reporters. The proceeding was not televised.

Prosecutors had been seeking a punishment of around 12 years in prison, while Fogle's lawyers asked for a sentence of around five years. Fogle is also reportedly paying about $1.4 million in total restitution to 14 victims, some of whom live in his home state of Indiana.

After going over a summary of the case, Judge Pratt issued a 188-month prison sentence for Fogle, to be served concurrently. Pratt said Fogle was "obsessed" with pornography and having sex with minors, according to WISH-TV's Tim McNicholas.

Responding to Fogle's statement that his actions have devastated his wife, Judge Pratt interrupted him to say, "You gave your wife almost $7 million though. She'll be OK."

That's according to local RTV6's reporter Jordan Fischer, who's in the courtroom.

In a brief statement to the court, Fogle says, "I owe a huge apology to the people who supported me and my positive messages the last 15 years," according to WISH-TV's Tim McNicholas.

Fogle then adds that he will learn from his recent experience and won't commit these crimes again.

Cannot even describe to you how surreal it is to hear them narrating the "LOLs" and "smile faces" in convos about sex w/ minors. #JaredFogle

McNicholas, who's at the courthouse, tweets: "Fogle breaks down in tears talking about victims. 'Not a day will go by where I don't think about them and what I did to impact their lives.' "

In a sequence that WISH-TV reporter Nick Natario describes as "disturbing and very graphic," prosecutors in their portion of today's hearing are reading aloud text conversations between Fogle and a prostitute who was also a minor.

RTV6's Jordan Fischer says that's "surreal" to sit in the courtroom and hear a prosecutor and Investigator Darin Odier of the Indianapolis Metropolitan Police Department narrate texts between Fogle and others, in which emojis and text shorthand such as "LOL" appear in discussions of having sex with minors.

Defense witness Dr. Rick May, a psychologist who works with registered sex offenders in Colorado, testifies that Fogle showed remorse and shame in discussing his relations with children, according to Natario. The psychologist also says he developed a treatment plan for Fogle after spending hours with him.

Fogle's defense team wants their client to serve his prison term in Colorado and continue to work with May, Natario reports.

Bradford also said that Fogle has a compulsive drive — and that "When he lost weight it seemed that in a short period of time he developed compulsive sexuality," as Adriana Diaz of CBS News reports.

Fogle's lawyer also sought to clarify that while his client had had sex with minors, his victims were adolescents and not children, The Indianapolis Star says. The prosecutor in the case also noted that investigators determined that Fogle had not abused his own children. Fogle has been married for five years and is the father of two children under the age of 10.

But as Jordan Fischer of local RTV6 Indianapolis reports, some of the child pornography victims in the case were as young as 6.

At today's hearing, Pratt noted that as early as 2007, Fogle repeatedly discussed his interest in having sex with minors, RTV6's Fischer reports. Citing audio recordings of Fogle, she said he also offered to pay prostitutes to find teenagers willing to have sex with him.

Fogle acknowledged that those details are accurate.

As the Star reports, Pratt "is widely considered the toughest judge in the Southern District in terms of prison sentences."

The plea deal was reached in mid-August, after Fogle, 38, was charged with traveling to other states in order to pay to have sex with underage minors. It was a startling turn of events for the man who became a national celebrity by smilingly telling his story of how eating Subway sandwiches had helped him lose weight.

The seriousness of the case became apparent almost immediately, as reports of a wide-ranging investigation into Fogle were followed by a raid of his home — and details of his activities were publicly revealed by a female confidante who had worked with the FBI to gather evidence against him.

Soon after the raid of Fogle's home, Subway announced it had severed all ties with him. That outcome, and the prison sentence pronounced today, all began with a single message to the police about Fogle.

As the U.S. attorney's office in southern Indiana noted at the time Fogle was charged:

"His child pornography crime began when he learned that alleged co-conspirator Russell Taylor was sexually exploiting a 14 year old girl in March 2011. At that time, Mr. Fogle did nothing to stop the abuse or report it to authorities, but chose instead to receive and repeatedly view the child pornography involving the girl and those other minors produced by his alleged co-conspirator in the years that followed. It total, Mr. Fogle admitted in court pleadings filed today that his actions caused the sexual victimization of a total of 12 minors in Indiana before his co-conspirator's arrest in April 2015. He preyed on minor victims who did not have the ability to protect themselves."

As the Two-Way reported in August, at the time of those events, Taylor was running Fogle's charitable foundation. He has reached his own plea deal and is expected to be sentenced in December.