Accessibility links
After Night Of Clashes, Protests Continue In Minneapolis : The Two-Way For five days, protesters have been demanding justice for a black man who was shot by police in the head on Sunday. Police tried to disperse protesters on Wednesday using chemical irritants.

After Night Of Clashes, Protests Continue In Minneapolis

After Night Of Clashes, Protests Continue In Minneapolis 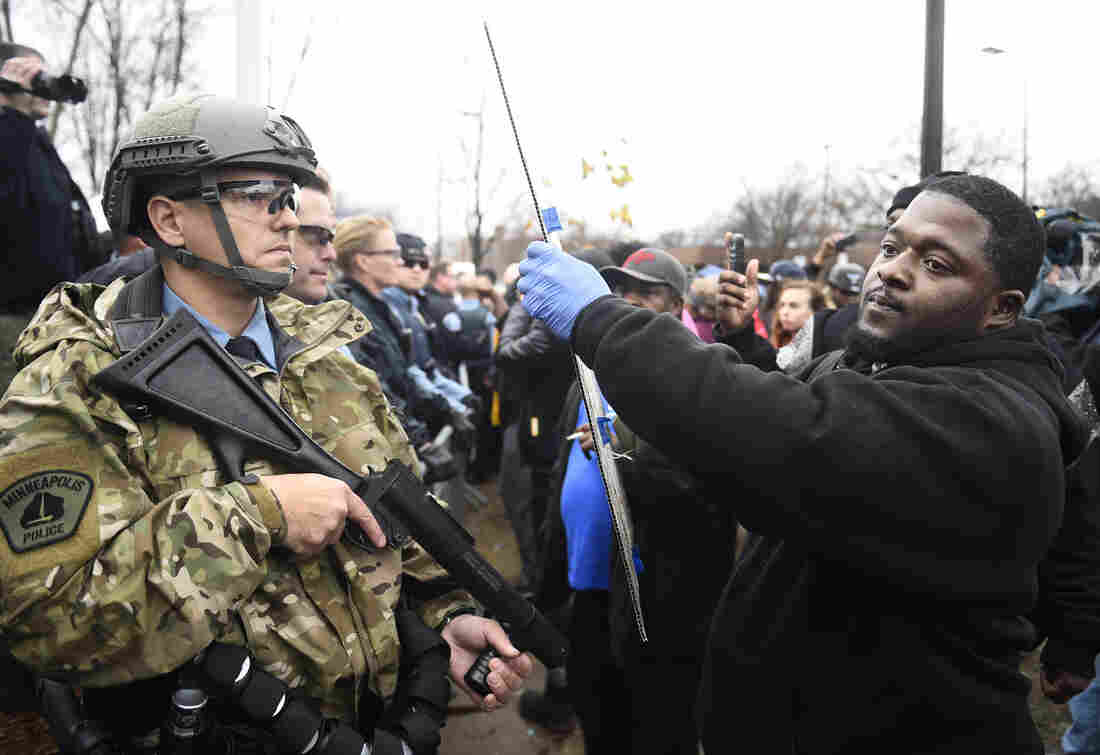 Police officers watch as a demonstrator holds a sign in front of a north Minneapolis police precinct during a protest in response to Sunday's shooting of Jamar Clark by police officers in Minneapolis. Craig Lassig /Reuters /Landov hide caption Police officers watch as a demonstrator holds a sign in front of a north Minneapolis police precinct during a protest in response to Sunday's shooting of Jamar Clark by police officers in Minneapolis.

Protesters in Minneapolis clashed with police Wednesday night, as demonstrations over the police shooting of a black man intensified.

"A gathering of hundreds of protesters at a north Minneapolis precinct grew tense Wednesday night, after police cleared the entrance of the station where some had camped since Sunday after Jamar Clark was shot by police.

"Police sprayed a chemical irritant at a crowd through a chain link fence, and Minneapolis officials say some officers were targeted as well.

"By late afternoon, around 300 Black Lives Matter protesters stood in a cold rain outside the precinct. When police removed a few of them from inside the vestibule, the protest grew outside."

According to The New York Times, Clark was shot in the head by police on Sunday and he died Monday at a hospital. The Minneapolis Star Tribune reports that police say they shot Clark after a "struggle with officers." Clark, they said, was interfering with paramedics who were treating his girlfriend.

Demonstrators have taken to the streets daily since the shooting.

Minneapolis Police said that on Wednesday night, they had fired one "marking round" to someone "throwing bricks" and that they had used a chemical irritants after their officers were attacked with rocks and bottles.

The AP talked to one protester, Wintana Melekin, who complained about the police tactics being used to disperse protesters:

"I understand that emotions are running high in the community and across the City. I share many of the emotions that people are feeling in Minneapolis today. I firmly believe in everyone's right to protest and understand that people want to have places where they can gather and do that peacefully. We also want to ensure everyone's safety."

The Black Lives Matter movement in Minneapolis are say they have plans for a "mass occupation" today at 5 p.m. ET.

"Today, we will grow in numbers and let the nation know that this type of oppression and injustice will not stand in our city," the group said in the event's Facebook page.