Accessibility links
House Votes To Increase Security Checks On Refugees From Iraq, Syria : The Two-Way The GOP-authored bill would temporarily halt all refugee applications from the two nations, and require top security officials to sign off on every individual refugee. 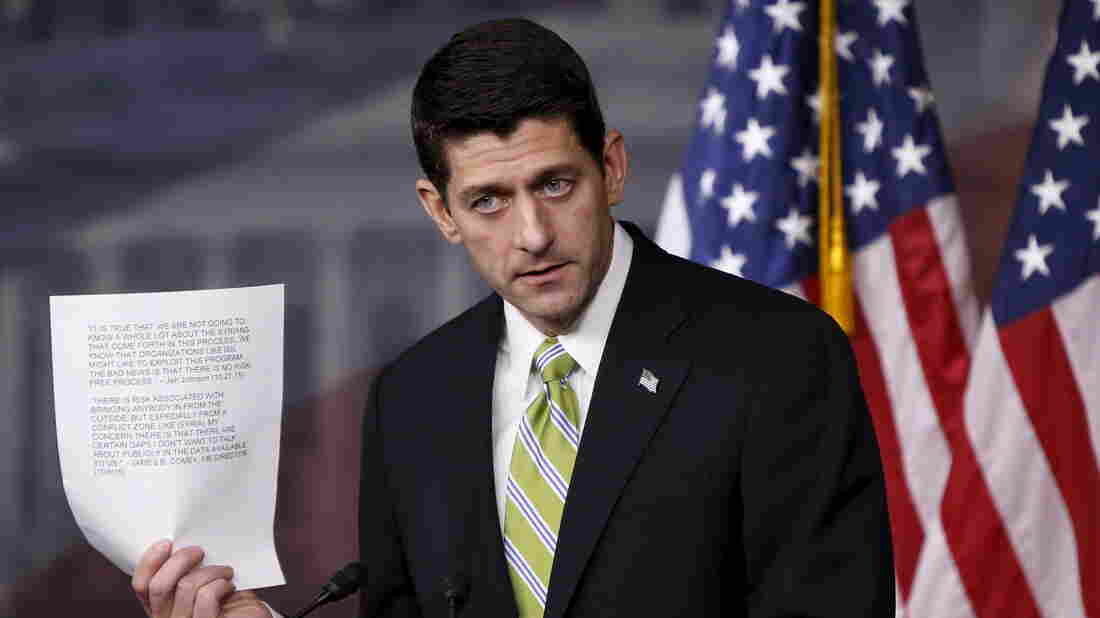 Speaker of the House Paul Ryan holds up statements from the FBI director and the secretary of Homeland Security about the risk involved in admitting refugees from Syria, during a news conference Wednesday about the House bill calling for a stricter vetting process for refugees from Syria and Iraq. Gary Cameron/Reuters/Landov hide caption 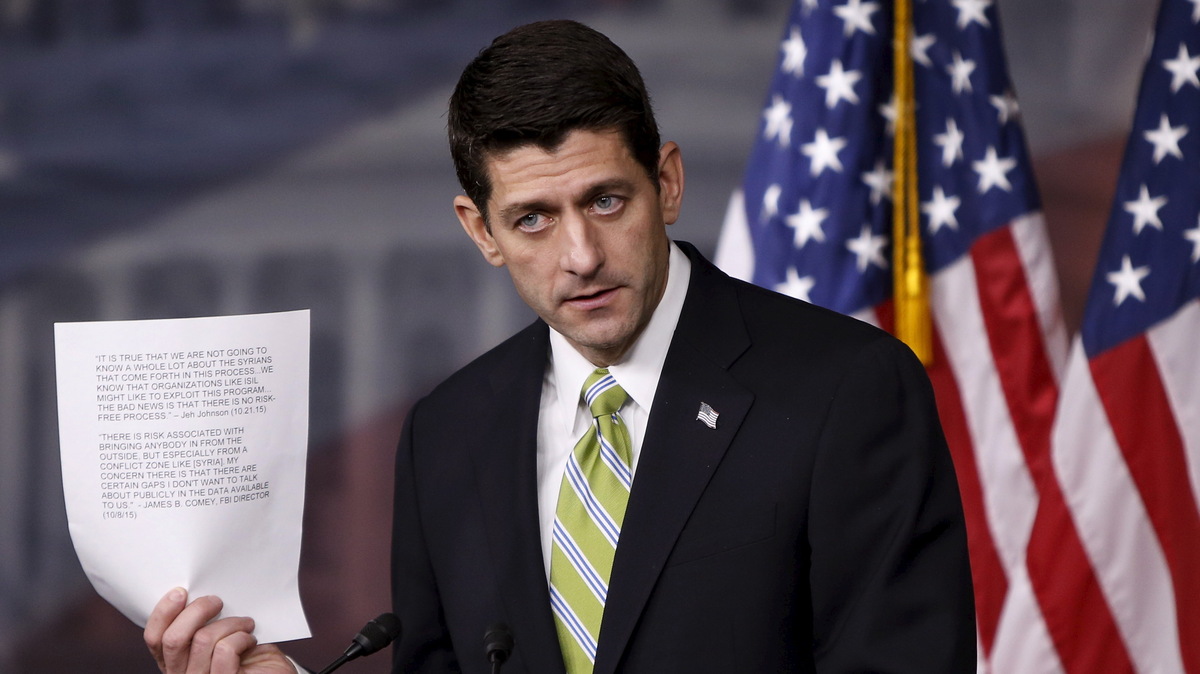 The House of Representatives has easily passed a GOP-authored bill to restrict the admission of Iraqi and Syrian refugees to America by requiring extra security procedures.

The bill — called the American Security Against Foreign Enemies Act of 2015, or the American SAFE Act of 2015 — would require the secretary of Homeland Security, the head of the FBI and the director of national intelligence to sign off on every individual refugee from Iraq and Syria, affirming he or she is not a threat.

The FBI director would also need to confirm that a background investigation, separate from the Homeland Security screening, had been conducted on each refugee.

Lawmakers say it is the first of many bills aimed at addressing security concerns in the wake of the Paris attacks, reports NPR's Muthoni Muturi.

Supporters of the bill say it would require a "pause" in admitting Syrian and Iraqi refugees, as current applications would be halted while a new vetting process was established. Some conservative critics object that it doesn't ban such refugees outright.

Meanwhile, liberal House members say requiring top officials to be involved in thousands of individual applications is unmanageable, and that the bill would result in an extended roadblock for Syrians and Iraqis fleeing a humanitarian crisis. That's a rejection of American values, some Democrats argue.

The bill passed the House of Representatives 289-137.

It's unclear whether the Senate will take up the legislation, says NPR's Arnie Seipel. If the bill does pass through Congress, President Obama has pledged to veto it. But if the House were voting on a veto override, they'd need no more than 290 votes — just one more than they had Thursday — to overrule the president.

Slamming the door in the face of refugees would betray our deepest values. That's not who we are. And it's not what we're going to do.

The administration says the bill would introduce "unnecessary and impractical requirements that would unacceptably hamper our efforts to assist some of the most vulnerable people in the world."

It would also undermine allies and partners in the Middle East and Europe, the administration says.

Obama argues that the existing vetting process — which includes fingerprinting, examination of personal history and interviews — is sufficient, and the certification requirement the Republicans are calling for would "provide no meaningful additional security."

The Obama administration has recently begun disclosing details about how Syrian refugees are currently screened. As we reported Tuesday, the process includes multiple agencies and lasts up to two years.

One challenge is that the Syrian government does not cooperate with the U.S., making it difficult to verify some Syrian documents, The Associated Press reports. But the administration says Syrian refugees provide extensive amounts of information for investigators to use.

The U.S. has taken in about 2,500 Syrian refugees since 2011, according to the AP, and the Obama administration has announced a plan to accept 10,000 more in the coming year. The White House says half of the refugees admitted to the U.S. are children, and about a quarter are older than 60.

A Bloomberg poll released this week found more than half of respondents think the U.S. should stop accepting Syrian refugees.