Accessibility links
Attack On MSF Hospital A 'Tragic But Avoidable Accident,' Pentagon Finds : The Two-Way The Oct. 3 strike on a Doctors Without Borders facility in Afghanistan — which killed 30 people — was found to be the result of human error, compounded by faulty equipment and communication failures. 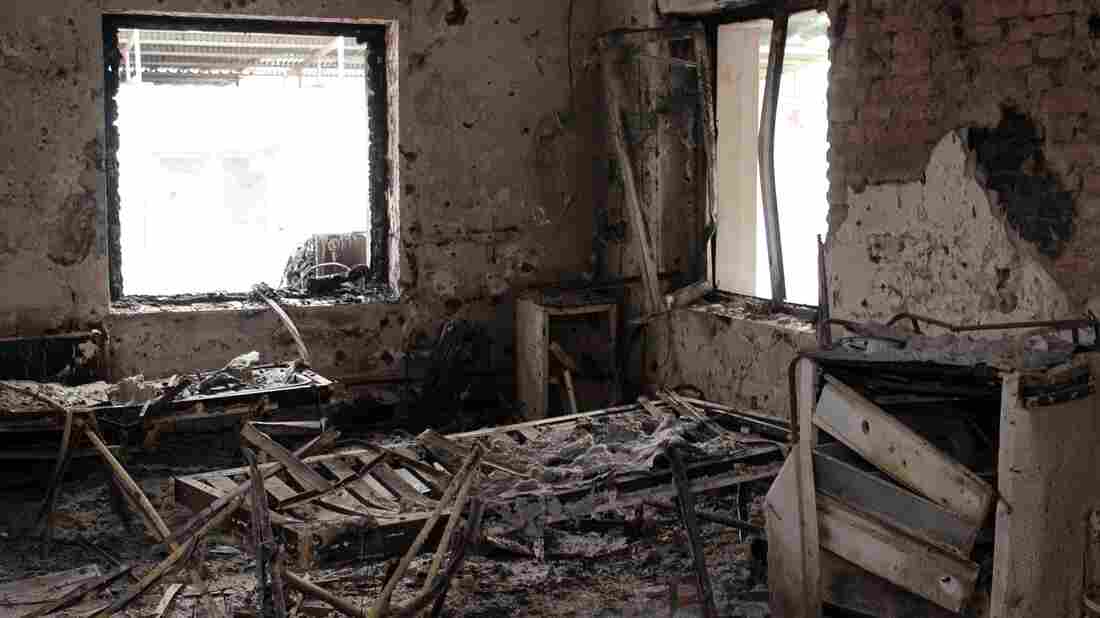 The charred remains of the Doctors Without Borders hospital is seen on Oct 16, almost two weeks after it was hit by a U.S. airstrike in Kunduz, Afghanistan. Najim Rahim/AP hide caption 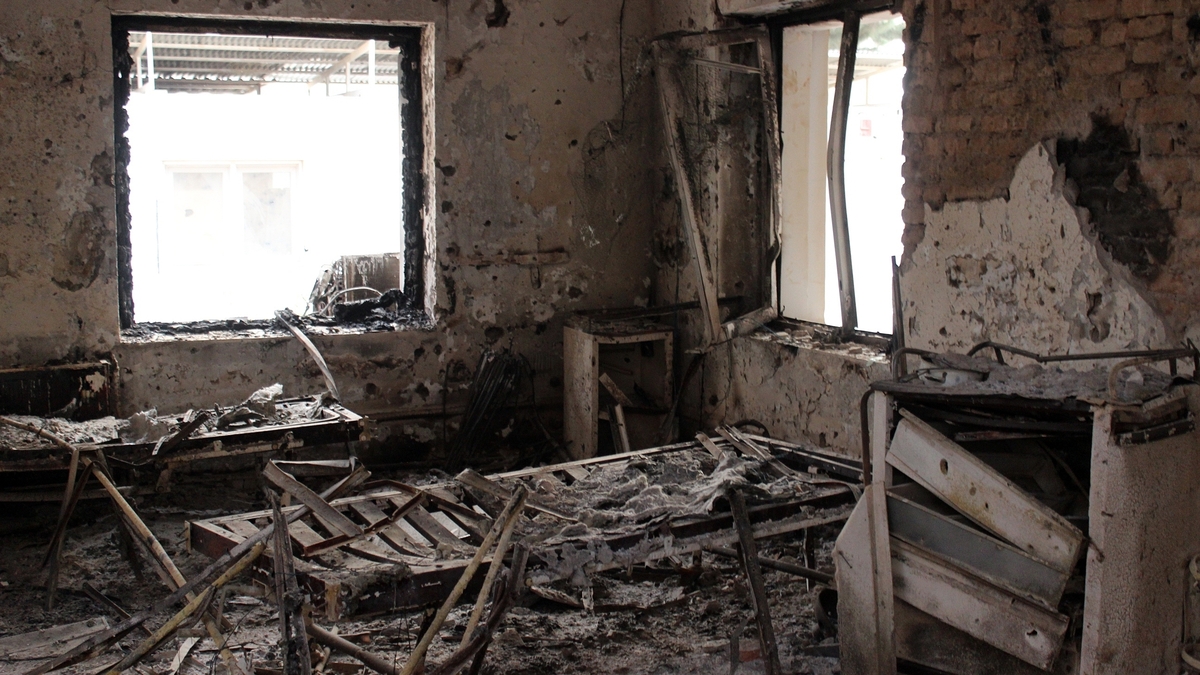 The charred remains of the Doctors Without Borders hospital is seen on Oct 16, almost two weeks after it was hit by a U.S. airstrike in Kunduz, Afghanistan.

A Pentagon investigation into a deadly U.S. airstrike on a Médecins Sans Frontières hospital in Kunduz, Afghanistan, has found the attack was the result of human error, compounded by malfunctioning computers and communication failures.

Gen. John Campbell, the commander of U.S. forces in Afghanistan, detailed the findings in a Pentagon briefing Wednesday. "This was a tragic but avoidable accident caused primarily by human error," he said.

On Oct. 3, a special operations AC-130 gunship fired on the hospital facility for 29 minutes, according to the Pentagon. However, MSF has said the assault lasted for more than an hour.

The hospital's location was known to the U.S. military, and officials from MSF (also known as Doctors Without Borders) repeatedly phoned U.S. and Afghan military officials during the attack, trying desperately to stop the heavy fire.

At least 30 people, including patients and hospital staff, were killed and 37 others were wounded.

A spokesman for Afghanistan's Interior Ministry said a day after the airstrike that the hospital was attacked because "terrorists" were hiding inside.

But beginning days after the attack, the U.S. military maintained that the facility was targeted by accident. "We would never intentionally target a protected medical facility," Campbell said Oct. 6.

At the time, U.S. officials did not explain how such a mistake was possible.

Report: A Series Of Avoidable Errors

The report released Wednesday indicates that while some U.S. officials were aware of the hospital's location, the gunship crew was not. The deadly attack "was a direct result of avoidable human error, compounded by process and equipment failures," Gen. Campbell said during the briefing.

The AC-130 gunship was supposed to be firing on a compound of the Afghan national intelligence agency that reportedly had been overrun by Taliban forces. The MSF hospital was 450 yards away from that compound.

The gunship fired on the hospital due to a series of errors, the report found, including:

The gunship took off 69 minutes early because of an emergency situation with troops on the ground, Campbell said. That meant the aircraft launched without a mission briefing.

When officials realized the gunship was not needed for that situation, it was diverted to Kunduz to target the compound — still lacking the information it otherwise would have received during a standard briefing, including the location of the nearby hospital and the fact that it was on a no-strike list.

The AC-130's onboard computer was malfunctioning, leaving the crew without the ability to transmit video, email or electronic messages.

That led to insufficient communication between the aircraft crew and troops on the ground, the report found.

The gunship, believing it was under attack from a surface-to-air missile, withdrew to an 8-mile orbit around the target in Kunduz — far enough to reduce the accuracy of its targeting methods. As a result, when the flight crew input the coordinates it had been given, the gunship's computers inaccurately displayed an open field as the target, the report found.

As a result, the crew used a physical description of "a large building near an open field" to identify what they thought was the proper target — but which was in fact the MSF hospital. Given the distance and that it was about 2 a.m., the crew was unable to see any signs indicating it was a hospital, according to the report.

The crew didn't undertake "appropriate measures" to verify that the facility was an appropriate target, the Pentagon says.

The gunship crew did not observe any hostile activity from the hospital — no gunfire that would indicate it was, as they believed, a hostile target. They continued firing anyway.

As the plane got closer to the target, the computer system began showing the correct target instead of the open field. But the crew was "fixated on the physical description," Campbell says, and did not pay attention to the corrected grid coordinates.

Delay in ground response once notified

When an officer on the ground received a call from MSF indicating that the facility was under attack, it took 17 minutes for commanders to realize it was the AC-130 firing on the wrong target, the Pentagon says.

Doctors Without Borders Director, A Day After Attacks: 'There's Really No Excuse'

About a dozen people have been suspended or are facing disciplinary actions, NPR's Tom Bowman reports. But it's unclear exactly what those consequences might be.

It's also unclear why it took a full 17 minutes for U.S. military personnel on the ground to realize the deadly error and why the Pentagon and MSF give very different durations for the attack.

As Tom notes, there has also been no explanation why the gunship crew would continue to fire — for about half an hour, according to the Pentagon — at a target that was not firing back.

The investigation says that while rules of engagement were violated, the hospital was not intentionally targeted. MSF has alleged in its account of that night that the airstrike presumably was a war crime.

MSF has demanded an independent investigation, saying that relying on an internal U.S. investigation would be "wholly insufficient."