Accessibility links
NASA Probe Prepares For Its Final Pass Around Ceres : The Two-Way The dwarf planet most recently is famous for the two mysterious, bright spots on its surface.

NASA Probe Prepares For Its Final Pass Around Ceres

NASA Probe Prepares For Its Final Pass Around Ceres 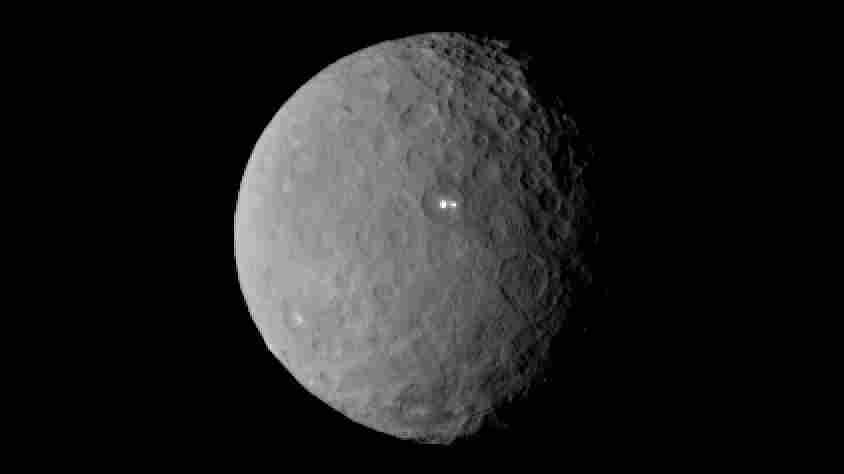 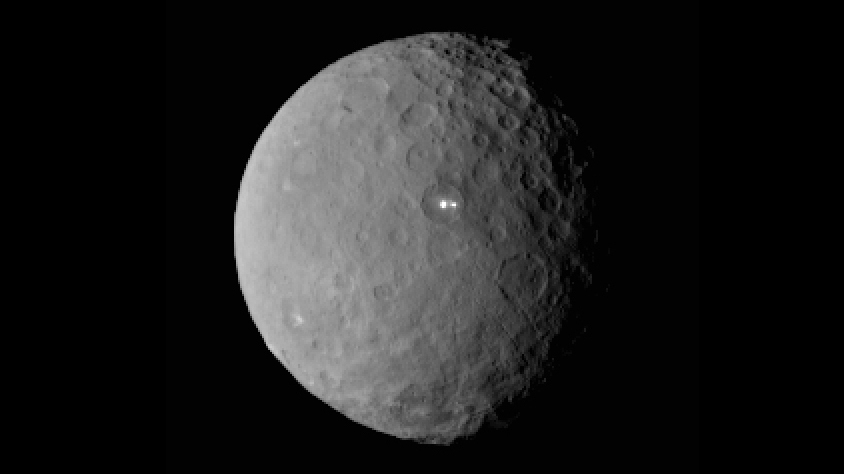 An image of Ceres taken by NASA's Dawn spacecraft shows the two mysterious, bright spots on the dwarf planet.

This is the time of year that ancient Greeks gave thanks to the goddess Ceres for bringing forth a bountiful harvest. Modern planetary scientists give thanks to a different Ceres — not a goddess, but the largest object in the belt between Mars and Jupiter.

Studying Ceres should help researchers gain a better understanding of how our solar system formed, and they'll soon have unique new data about Ceres from a NASA spacecraft called Dawn, which is spending this Thanksgiving heading for its closest, and final, orbit around the dwarf planet.

It should reach the desired orbit in a couple of weeks.

A really amateurish, not to scale, illustration of what NASA's Dawn spacecraft's doing at Ceres. They made me do it. pic.twitter.com/GDvtU3ecGR

Dawn was launched in 2007. Its mission was to explore two large objects in the belt of asteroids between Mars and Jupiter.

The first object was Vesta. It's a nearly spherical asteroid about 330 miles in diameter, but with a large chunk missing from its south pole. Astronomer Heinrich Wilhelm Olbers spotted Vesta in 1807 — the fourth asteroid ever discovered.

Dawn arrived at Vesta in July 2011, and spent 14 month taking pictures and recording data. Then it headed on toward Ceres, arriving in March of this year.

Ceres, first sighted on New Year's Day in 1801 by Giuseppe Piazzi, was the first asteroid ever discovered. (It was designated a dwarf planet in 2006.) It's also a spheroid, about twice the size of Vesta. Most recently, it's famous for the two mysterious, bright spots on its surface.

Dawn has been studying Ceres from orbits of different altitude. Higher altitudes are useful for seeing larger geologic features, closer ones are better for detailed examination. The first orbit was approximately 8,400 miles, then 2,700 miles, then 900 miles, and now it's in the process of lowering the orbital altitude to 235 miles. It has about 100 miles to go.

The mission is expected to end in June 2016, when the spacecraft no longer has enough fuel to point its cameras toward Ceres or its radio antennas toward Earth.