Accessibility links
High Chance That 2 Rooms Are Hidden Behind King Tut's Tomb, Egypt Says : The Two-Way One of the hidden chambers found in a new scanning project may be the tomb of Queen Nefertiti, who died in the 14th century B.C. 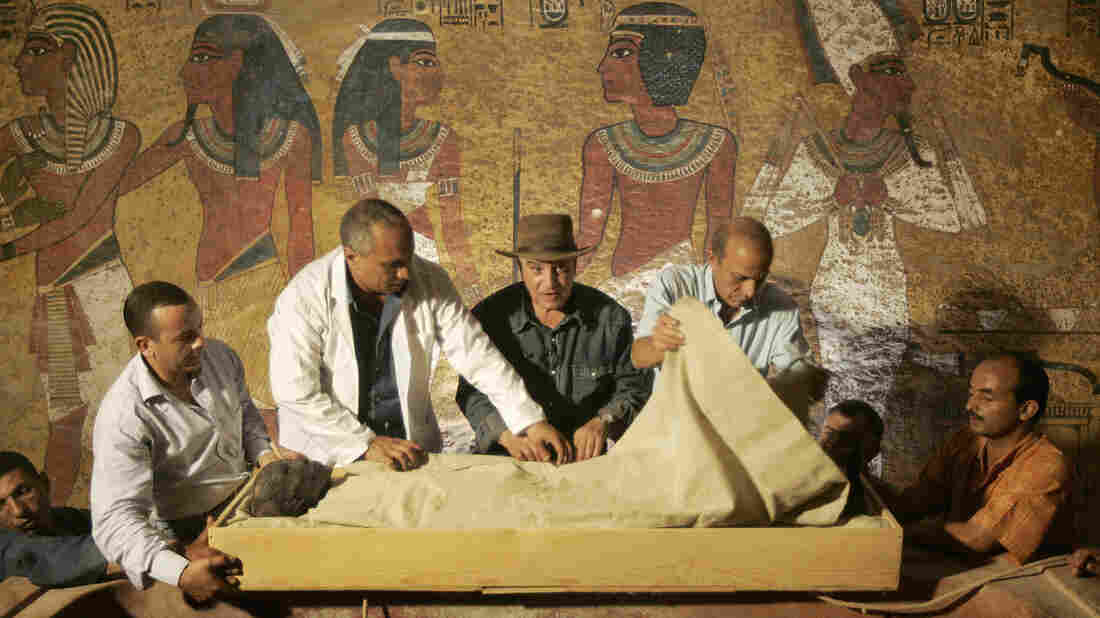 Officials remove the linen-wrapped mummy of King Tutankhamen from his stone sarcophagus in his underground tomb in the famed Valley of the Kings in Luxor in 2007. New radar scans show that other rooms may be hidden behind the tomb's walls. AFP/AFP/Getty Images hide caption 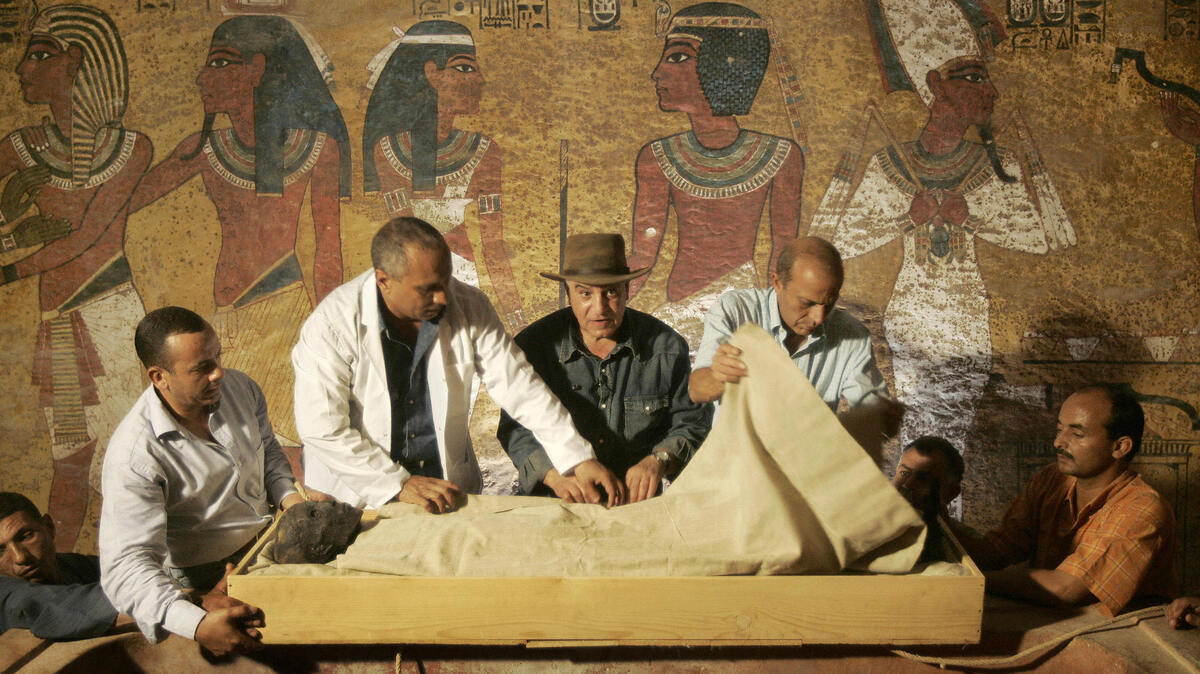 Officials remove the linen-wrapped mummy of King Tutankhamen from his stone sarcophagus in his underground tomb in the famed Valley of the Kings in Luxor in 2007. New radar scans show that other rooms may be hidden behind the tomb's walls.

They know something is there; they just don't know how big it is. That's the latest from Egyptian officials who are trying to determine whether Queen Nefertiti's tomb might be hidden behind King Tutankhamen's tomb.

The news came Saturday, as Egypt's minister of antiquities announced the latest findings of a project that's scanning ancient pyramids, in the hope of finding chambers that have remained hidden since the 14th century B.C.

At a news conference in Luxor, Egypt's Antiquities Minister Mamdouh el-Damaty says researchers have boosted their level of certainty about a hidden chamber from 60 percent to 90 percent.

"The search by the ministry began after British Egyptologist Nicholas Reeves published a paper saying that cracks in the walls of King Tut's burial chamber suggest there are two other passages. One is possibly a storeroom; the other might be the tomb of Queen Nefertiti, best known for her beauty.

"Reeves' hypothesis has been met with some skepticism. After all, there have been many false discoveries of the queen. But Damaty says that scans indicate that there almost certainly is some type of hidden chamber behind the wall of the tomb in the Valley of the Kings. They don't know what it might be. They will need to do more scans to be sure."

A radar expert who's working on the project says he's sure that a void exists behind the wall – and that more tests are needed to determine what it is.

"There is, in fact, an empty space behind the wall based on radar, which is very accurate, there is no doubt. We cannot say at this point however the size of the space behind the wall," Japanese radar specialist Hirokatsu Watanabe said, according to Agence France-Presse. "We have the data but we must analyze it to understand. But we are working in the Valley of the Kings, so we are expecting to find antiquities behind the wall."

The test results will now be sent to Japan for further analysis, the officials said Saturday.

Mapping the interiors of Egypt's pyramids is part of an ongoing project that will scan ancient sites with a range of non-invasive technologies such as infrared thermography, 3D laser scans, drones, and muon radiography (which uses cosmic particle detectors to image the interiors of dense objects).

The project analyzed King Tut's tomb after Reeves published his findings in July, drawing on laser scans inside the chamber. Soon afterward, Reeves described his findings to NPR's Renee Montagne; from that transcript:

"REEVES: There is information on two of the four walls. The first lot of information is on the west wall. I believe it's possible to see traces of a doorway there which leads into a room, very similar to the annex, which is Tutankhamen-period storeroom filled with 2000 or so objects.

"MONTAGNE: Fabulous objects, I must say.

"REEVES: (Laughter) Fabulous objects, but the really interesting stuff is going on beneath the north wall.

"MONTAGNE: A wall that he says, once you peer through it, suggests a large hidden passage. And that led Reeves to his idea that is Nefertiti's lost tomb because that passage seems to continue on from an actual staircase.

"REEVES: The tomb of Tutankhamen's was a staircase going down, then turning to the right, which identifies it, I think, as the tomb of a queen because the king's tomb normally turns to the left, and the queen's tomb turns to the right. That's the first indication that we're dealing here with the burial of a queen. The second indication is that this corridor has been enlarged. And we know why that enlargement took place in the case of Tutankhamen - because they needed to introduce through it the huge panels of the gilded shrines which surrounded his sarcophagus and coffin. So that's the second thing. It's a queen who had obvious pharaonic prerogatives, in that she seems to have been buried within a nest of gilded shrines, similar to those of Tutankhamen."

The scanning project is being led by Cairo University and the Heritage Innovation Preservation Institute; it will continue through the end of 2016.