Accessibility links
Chicago Protesters Block High-End Stores, Demanding Inquiry Into Shooting : The Two-Way City and federal investigators showed a lack of urgency in dealing with the case, critics say. Local columnist and editor Carol Marin pins part of the blame on "the feds" and President Obama. 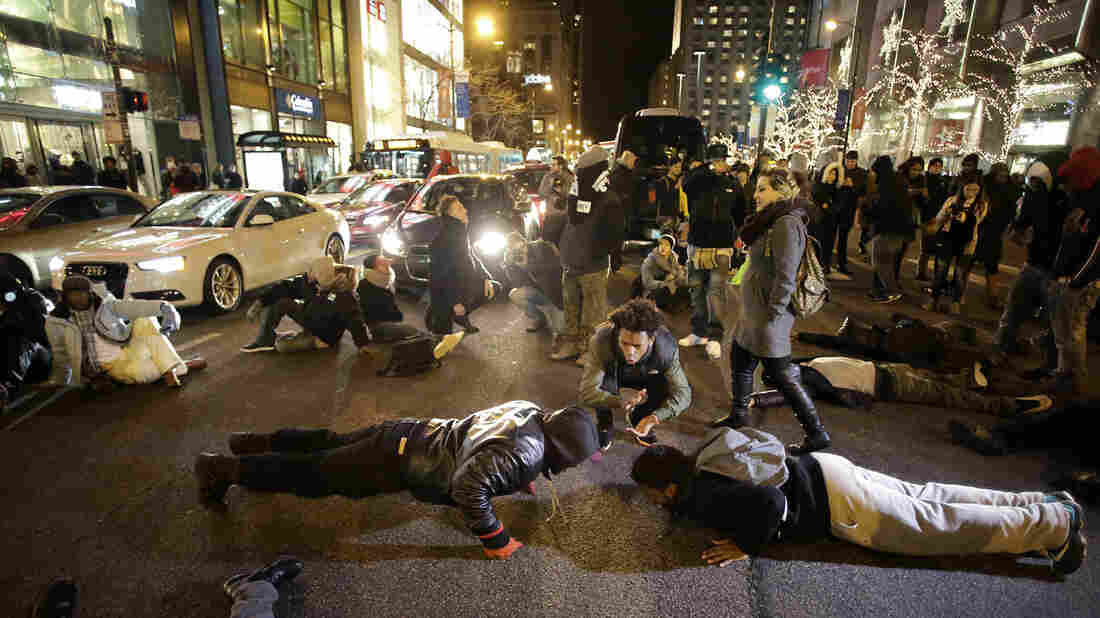 Demonstrators do push-ups Friday as others block motorists along Chicago's Michigan Avenue as they protest the shooting of Laquan McDonald who was killed by a police officer in 2014. Joshua Lott/Getty Images hide caption 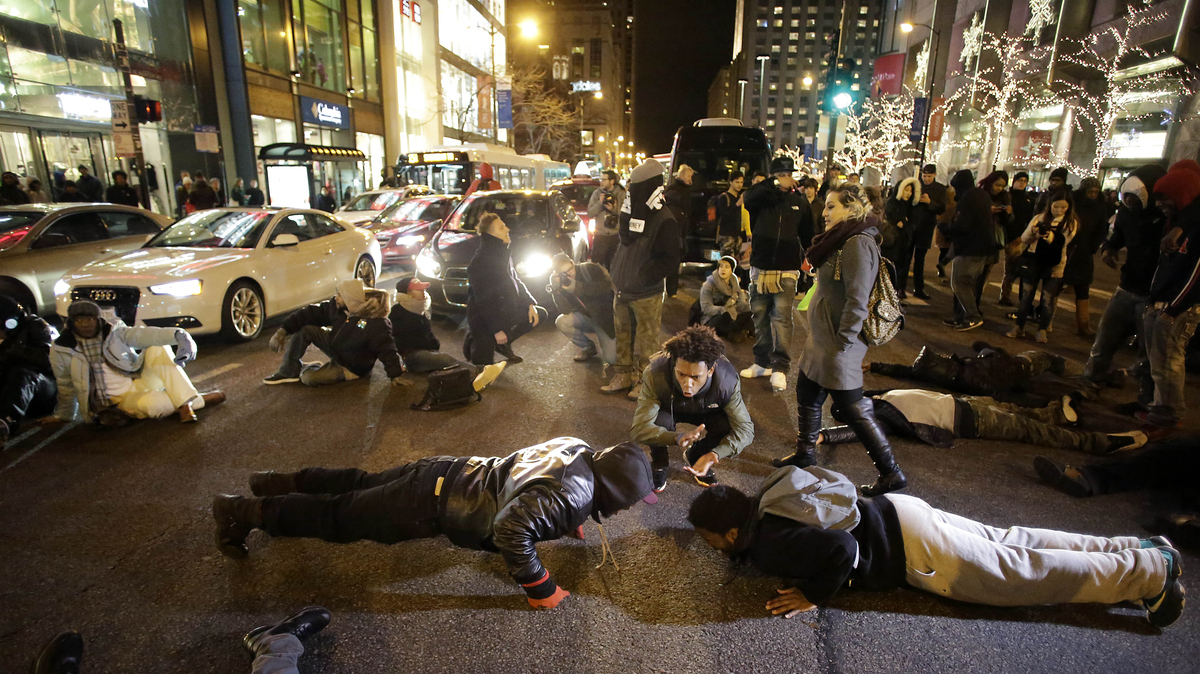 Demonstrators do push-ups Friday as others block motorists along Chicago's Michigan Avenue as they protest the shooting of Laquan McDonald who was killed by a police officer in 2014.

Days after a video was released showing a white police officer killing a 17-year-old black man, protesters in Chicago turned out to disrupt traffic and shopping along the city's famous "Magnificent Mile" retail strip on Black Friday.

The protesters chanted "16 shots, 14 months" — referring to the number of bullets that struck Laquan McDonald and the delay in both the release of the video and the pursuit of charges against Chicago officer Jason Van Dyke.

Earlier this week, Van Dyke, who had been placed on administrative duty as an investigation continued, was charged with murder in McDonald's death. That announcement came one day before a judge-ordered deadline for the city to release the video.

Critics say that city and federal investigators haven't shown urgency in dealing with the case; local columnist and editor Carol Marin pins blame on both "the feds" and President Obama, writing in the Sun-Times Friday, "The president doesn't hurry. Not even when his city is bleeding."

Noting that at the time of McDonald's death, Ferguson, Mo., and other cities were dealing with the fallout of controversial police killings — and that Obama's former chief of staff Rahm Emanuel was also facing a tough re-election bid as Chicago's mayor — Marin tells NPR's Scott Simon today:

"The city kept it quiet. But worse than that... the city and the [police] union did not tell the truth about what happened, they both said hours after the shooting that this young man lunged at police. The video contradicts that utterly. The fact is that the police department, according to the lawyers for Laquan McDonald, shooed witnesses away or berated them for saying that they saw an execution."

Activists are calling for an outside investigation into how Chicago handled the shooting; they also want McCarthy and other leaders, including Mayor Emanuel and Cook County State's Attorney Anita Alvarez, to resign.

On Friday, protesters fulfilled plans for protests that were put in place before the criminal charges and video became public.

At the normally bustling Apple store, the AP reports, "dozens of employees in red shirts stood in an otherwise empty two-story space and watched through store windows as protesters linked arms to stop anyone from entering."

In addition to protests that targeted retail operations, the Rev. Jesse Jackson led a large group in prayer and a moment of silence Friday in honor of McDonald, who was killed on Oct. 20, 2014.

This week, the long-anticipated release of the dashcam video led to protests that, according to WBEZ, sought "to honor McDonald and protest police brutality. But the march downtown didn't result in property damage or anything resembling a riot."

Discussing how Chicago avoided the violence that followed controversial cases of police killings of young black men in other cities, WBEZ's Natalie Moore spoke to Veronica Morris-Moore, a protest organizer who said, "I think people expected Chicago to burst in flames because the dominate narrative out there is that black people are reckless and we don't care about our communities or neighborhoods."

During Friday's demonstrations, three people were arrested, the AP reports:

"Several protesters were seen lying face-down on the ground in handcuffs. A police spokesman said three people were arrested, two traffic-related and a third related to a battery. He didn't give details.

"Police Superintendent Garry McCarthy said he believes the protests have gone 'exceptionally well' in large part because his officers have gone out of their way to let demonstrators express their outrage. He says despite people screaming in their faces, getting hit with spittle and thrown objects, officers are acting in a professional manner."

In at least one area, Friday's protests ended on a peaceful note, according to the Chicago Sun-Times:

"For some, the night ended just before 10 p.m., outside the Best Buy at the John Hancock Center — with an exchange of handshakes between protesters and some of the police officers they'd kept busy much of the day."

As Chicago copes with the aftermath of the McDonald shooting, the city has also been dealing with two other high-profile killings.

On Friday, authorities filed murder charges against a man in the death of a 9-year-old boy who was reportedly lured off a basketball court and shot in the head early this month, in a case that police say centers on gang rivalries.

And last week, Chicago's police chief recommended firing Det. Dante Servin, who shot and killed innocent bystander Rekia Boyd, 22, in 2012. Servin was acquitted on involuntary manslaughter charges this past April, when the judge in the case abruptly ended the trial before Servin's defense presented any witnesses.

As with the McDonald case, the outcome of the Servin trial sparked criticism of Alvarez. As WBEZ's Chip Mitchell reported in the spring, the judge in the Servin case "seemed to be saying the trial might have ended differently if prosecutors had charged the detective with murder."