Accessibility links
San Bernardino Shootings: What We Know Right Now : The Two-Way Information continues to trickle in regarding the deadly shootings Wednesday at Inland Regional Center in San Bernardino, Calif. 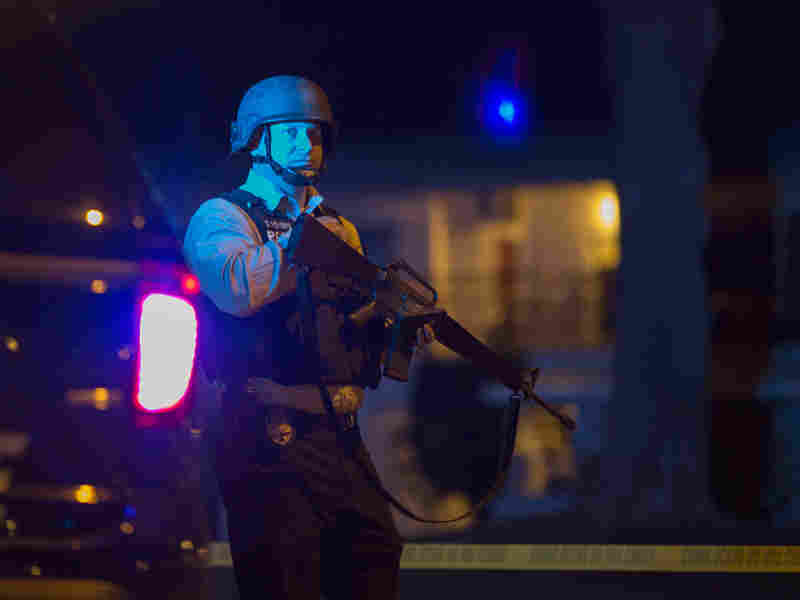 A policeman guards a police line late Wednesday as officers prepare to raid the home of one or more of the suspects in a mass shooting at the Inland Regional Center in San Bernardino, Calif. David McNew/Getty Images hide caption 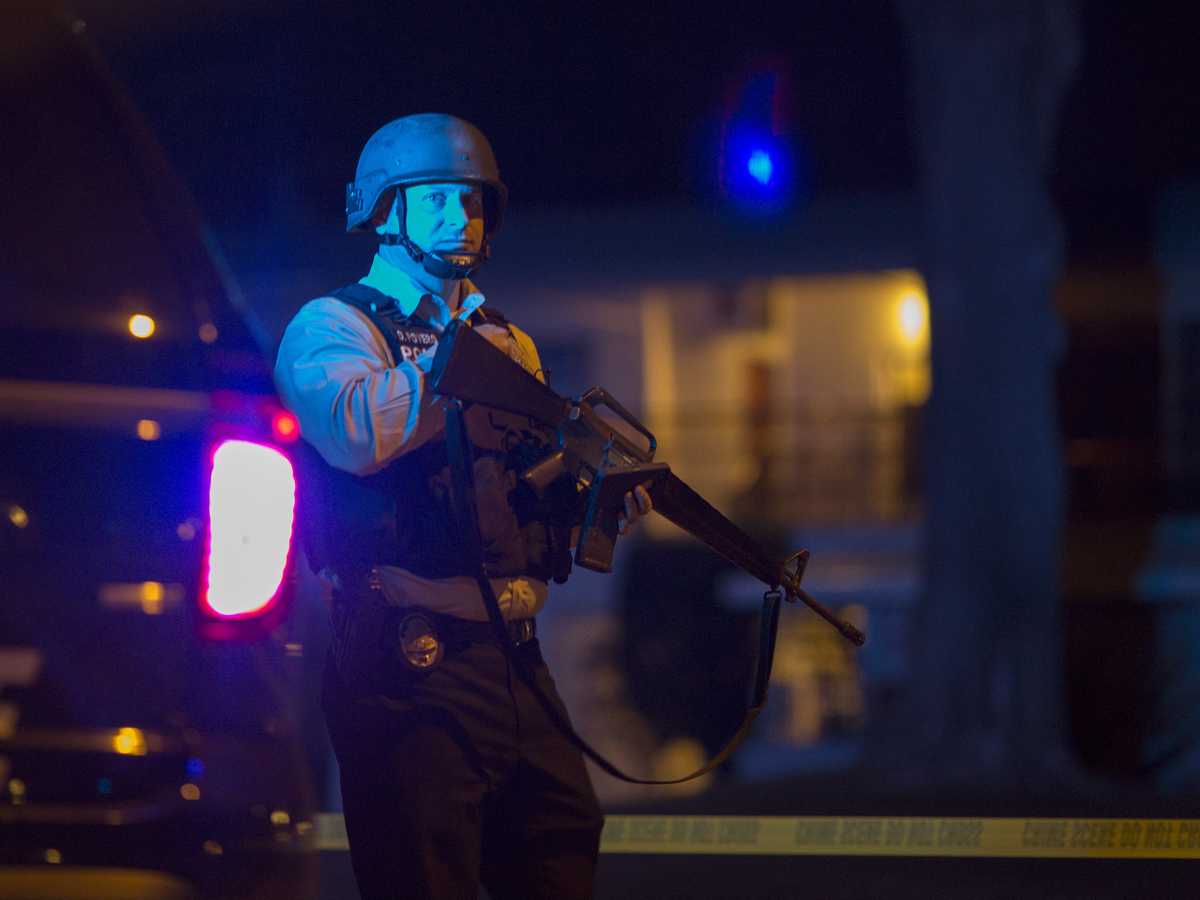 A policeman guards a police line late Wednesday as officers prepare to raid the home of one or more of the suspects in a mass shooting at the Inland Regional Center in San Bernardino, Calif.

Information continues to trickle in regarding the deadly shootings Wednesday at Inland Regional Center in San Bernardino, Calif. Here's what we've learned so far.

A holiday party for county health department employees was the target of the attack.

Two shooters were involved, authorities say. They wore masks and tactical-style clothing and carried assault-style rifles. The attackers fled in a black SUV.

Police say 14 people were killed and at least 17 more were injured, some critically. None has been identified at this point.

Police say three potentially explosive devices were found at the scene, and that by late evening authorities had finally disposed of them. Only at that point were investigators able to begin work at the crime scene.

Police were told by witnesses that Syed Farook had been at the party and had left in anger. With that information, police went to a residence in nearby Redlands, Calif. A black SUV approached the home and then sped off, spurring a chase that culminated in a gunfight in San Bernardino with at least 20 police officers.

Two suspects — Farook, 28, an American citizen, and Tashfeen Malik, 27 — were found dead in the vehicle. They were found with two assault rifles and two semi-automatic handguns. Police said the two were in a "relationship," whether married or engaged as yet unknown. Neither had had previous encounters with law enforcement, as far as the San Bernardino police chief knew.

One police officer was injured in the shootout, but his wounds are not life-threatening.

A third suspect observed running from the scene was arrested, but may not have been involved.

A source tells NPR's Dina Temple-Raston that, despite the masks that the attackers were wearing, witnesses were able to identify one suspect by his voice and build: Farook, an environmental health specialist with the San Bernardino County Department of Public Health.

Farook, a department employee for five years, had been attending the holiday party when he became involved in a dispute, leaving angry. The shooting began within a half-hour.

Dina reports that Farook's brother is also a subject of the investigation.

A house connected to Farook is the focus of a slow, cautious search by authorities that is being conducted using robots, in case of booby traps.

A man who identified himself as Syed Farook's brother-in-law, Farhan Khan, appeared at a press conference Wednesday evening held by the local chapter of the Council on American-Islamic Relations. Khan said he had last spoken to Farook a week ago, and that he had "no idea why would he do that, why he would do something like this." Khan said that he appeared at the press conference to express his family's sorrow for what had happened.

San Bernardino, Calif., is on the eastern fringes of Los Angeles, about 60 miles from the city center.

The office park, and the neighborhoods of interest in Redlands, Calif., were locked down for several hours.