Accessibility links
South African Sprinter Oscar Pistorius Convicted Of Murder : The Two-Way A South African judge has ruled that the trial judge erred when she found the double-amputee sprinter known as the "Blade Runner" guilty on the lesser charge of "culpable homicide" last year. 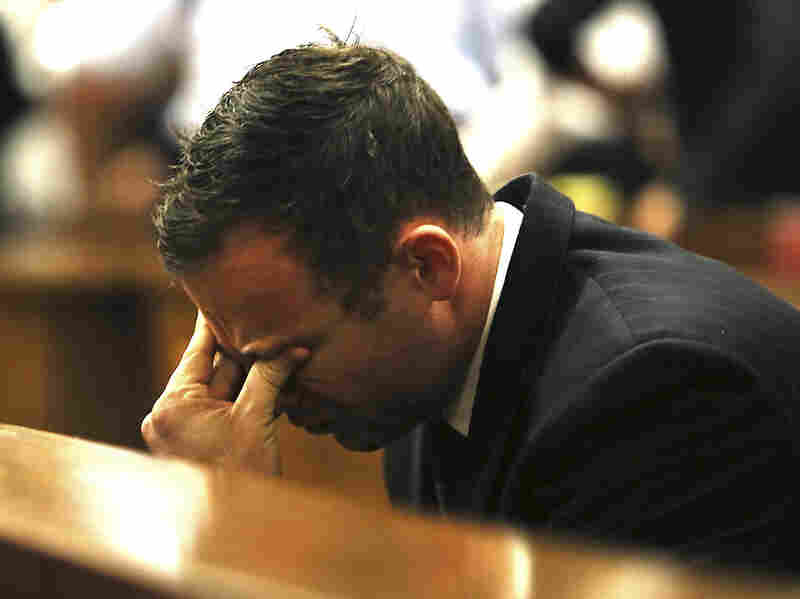 Pistorius, shown here during his trial, was released from prison in October, and has been living with an uncle under house arrest. Alon Skuy/AP hide caption 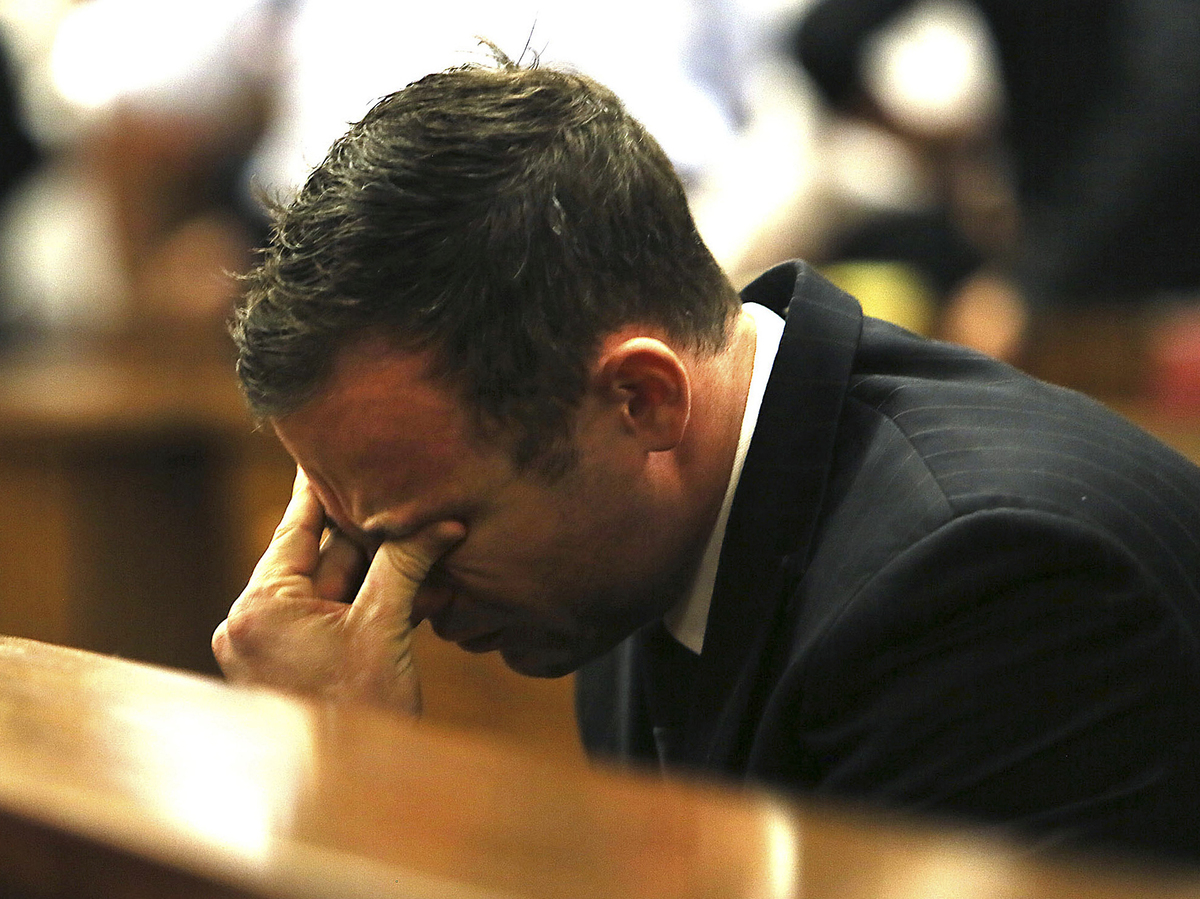 Pistorius, shown here during his trial, was released from prison in October, and has been living with an uncle under house arrest.

An appeals court in South Africa has convicted double-amputee sprinter Oscar Pistorius of murdering his live-in girlfriend, a ruling that could send him back to prison for a minimum of 15 years.

The court ruled that the trial judge erred last year when she convicted Pistorius of "culpable homicide," the equivalent of manslaughter, for killing Reeva Steenkamp by shooting her through a bathroom door in 2013.

In overturning the September 2014 verdict, Justice Lorimer Eric Leach of the Supreme Court of Appeal called the case "a human tragedy of Shakespearean proportions," The Associated Press reports. The news service quotes the judge as saying:

"A young man overcomes huge physical disabilities to reach Olympian heights as an athlete. In doing so he becomes an international celebrity, he meets a young woman of great natural beauty and a successful model, romance blossoms, and then, ironically on Valentine's Day, all is destroyed when he takes her life."

As the Two-Way has reported:

"Pistorius is a world-famous Olympian and Paralympian, known as the "Blade Runner" for his use of carbon-fiber blades during competition. His lower legs were amputated when he was a baby as a result of a genetic condition."

Pistorius maintained that he shot Steenkamp, a former model, accidentally, because he believed an intruder had broken into their Pretoria home. Prosecutors argued that he shot her following an argument.

Judge Thokozile Masipa, who heard the trial, ruled that Pistorius could not have known that Steenkamp was behind the door when he fired and acquitted him of the murder charge. But as The Telegraph reports, the appeals court found that to be an error:

"Justice Leach argued the fact that Pistorius didn't know Steenkamp was behind the door did not mean he is not guilty of murder.

"Justice Leach said: 'The argument appears to have been that in the circumstances that prevailed, the accused may well have fired without thinking of the consequences of his actions.

'In my view this cannot be accepted.'

"The Supreme Court judges argued that whether Pistorius believed it was an intruder or Ms Steenkamp behind the door did not go to the heart of the issue; he could reasonably be expected to have forseen that shooting in such a small space could lead to death."

The Telegraph said Leach also ruled that "the Supreme Court found that the original trial did not take into account all the circumstantial evidence involved in the case, including key police evidence, which was an error. The judges considered the ballistics evidence in particular to be crucial."

The verdict comes less than two months after Pistorius was released from prison on the lesser charge and placed under house arrest. He has been living with an uncle.

Under South African law, Pistorius will be sent back to prison, the BBC reports. Here's more from the BBC:

"We don't have a date yet, but it will be next year. The minimum sentence for murder is 15 years, but the judge does have the discretion to lower it."

The BBC adds that Pistorius "can challenge the ruling in the constitutional court but only if his lawyers can argue that his constitutional rights have been violated." There do not appear to be grounds for such an appeal, it quoted legal expert Mannie Witz as saying.

Steenkamp's father, Barry, told South African media that he was relieved by the judgment and described it as fair, the AP said:

" 'Let us now all get on with our lives,' Barry Steenkamp said. His voice breaking with emotion, he said of his daughter: 'I'm sure she'll be able to rest as well now.' "