Accessibility links
From Our Archives: When Is An Act Of Violence An Act Of Terrorism? : The Two-Way The shootings in San Bernardino have raised a familiar question, one that a linguist and a political scientist say keeps coming up because the line can be tough to draw.

From Our Archives: When Is An Act Of Violence An Act Of Terrorism?

From Our Archives: When Is An Act Of Violence An Act Of Terrorism? 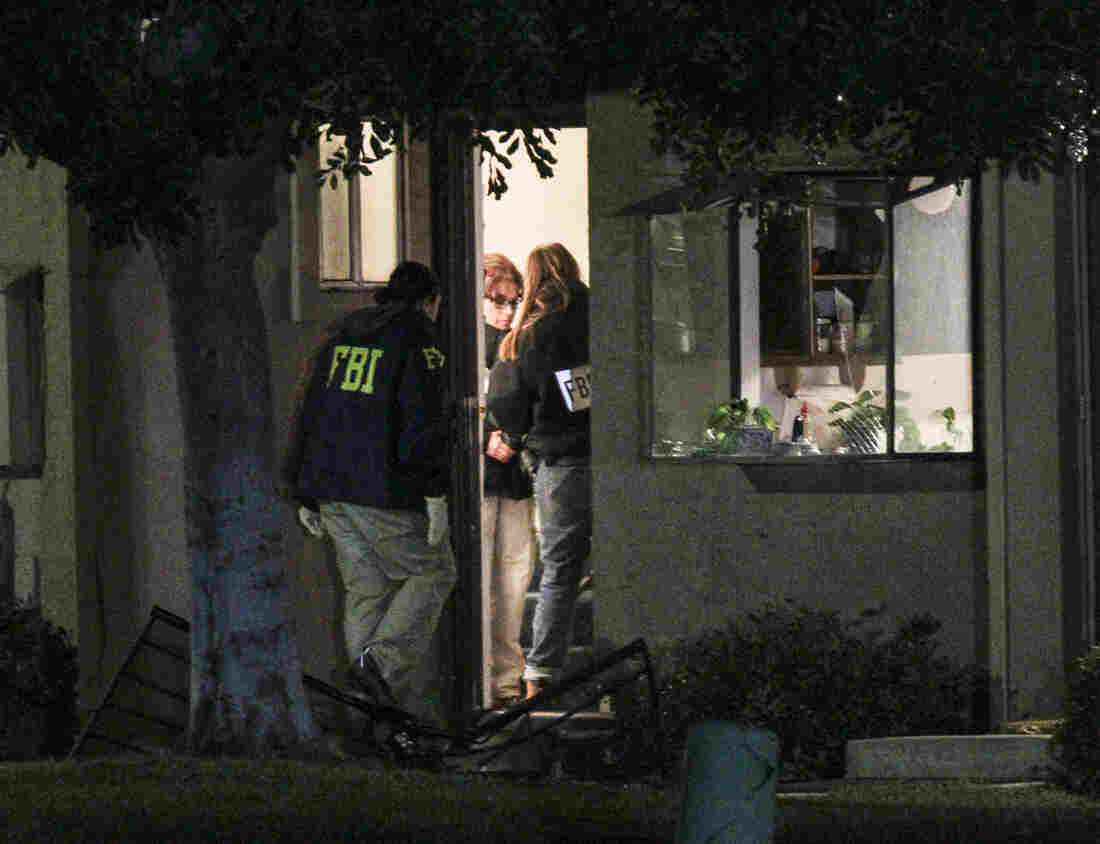 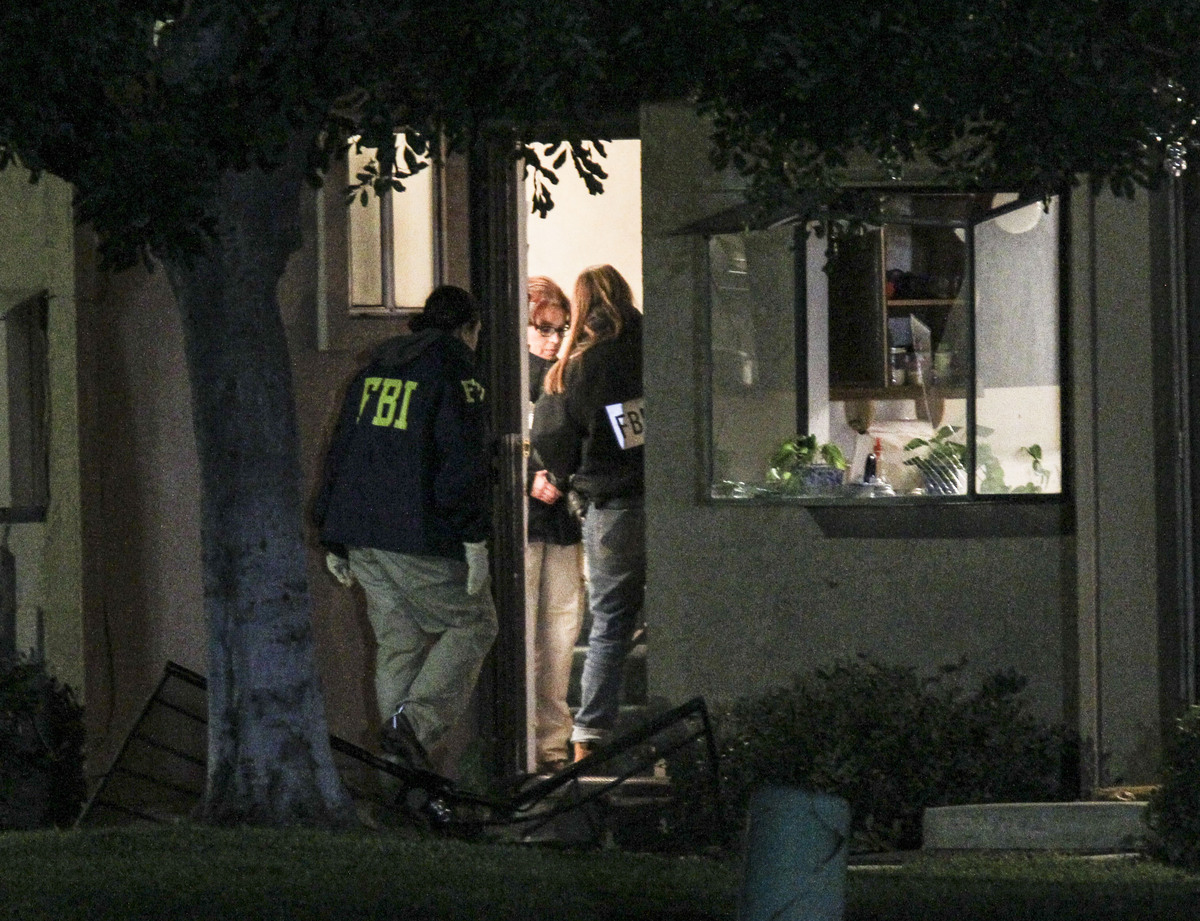 FBI agents search outside a home in connection with the shootings Wednesday in San Bernardino, Calif.

In the wake of a mass shooting that left 14 people dead in San Bernardino, Calif., a familiar question has cropped up: "Is this an act of terrorism?" NPR's Carrie Johnson reports that law enforcement authorities are still trying to decipher a motive in the case, which ultimately could determine what label is placed on the shooting.

We tried to unpack that complicated equation back in July, when Mohammod Youssuf Abdulazeez opened fire on two military facilities in Chattanooga, Tenn. The cases are similar in some ways: Both involved mass shootings by suspects of the Muslim faith. Both targeted buildings affiliated with the government, and in both cases, authorities have struggled with a label.

That's why we decided to resurface this piece from our archives. Just remember that while much of the analysis can apply to the San Bernardino case, there's still a lot about the shooting that isn't known. With that caveat, here's our original piece from July:

Minutes later, authorities softened those words, saying all angles were being pursued — that they had not yet established a motive in the case.

That got us wondering: When does an act of violence become an act of terrorism? It's a conversation that emerged after the mass shooting last month in Charlestonand it was debated for months after Army Maj. Nidal Hassan killed 13 people and wounded 32 others when he opened fire at Fort Hood in 2009.

The word terrorism is a tricky one, says Robin Lakoff, a linguist at the University of California, Berkeley, who has studied the language of war. That's because, she says, "terrorism itself, whatever that is" lives in a place between crime and war.

Navin Bapat, a professor of political science at the University of North Carolina at Chapel Hill, who studies terrorist campaigns, says that at least among political scientists there is a well-worn definition for terrorism: an attack against a "non-combatant target" for political purposes that is intended to affect an audience larger than the immediate victims.

Bapat says to look at two words in particular: "non-combatant" and "political purposes." Those two things make this definition squishy.

So, does the shooting in Chattanooga constitute terrorism?

It's complicated, Bapat says. At first blush, he says he would say no because the attack was against members of the military.

"It seems pretty clear that is less of a terrorist attack and more of a guerrilla attack. But what if it's an off-duty military personnel, then how do you classify that? Or how do you classify the attack on the Pentagon on 9/11 which was a military target but it was [perpetrated] with a civilian airliner — so is that terrorism because you used a civilian apparatus to attack the military? There is some squishiness there."

He says that if Abdulazeez had been indiscriminately trying to kill as many people as he could at the Chattanooga military centers, then it could fit the definition of terrorism.

Ultimately, Bapat said, justice officials have to make their own determination, which affects how a case is investigated and prosecuted.

What's clear is that even law enforcement can struggle with that categorization.

Law enforcement officials say they are working to determine a possible motive — which speaks to the second part of Bapat's definition of terrorism.

Killian, the U.S. attorney, said in a news conference today that they are investigating the shootings "as an act of terrorism until the proof shows us otherwise."

They are poring over Abdulazeez's Internet activity and examining his overseas travel, and so far they have found no connection to terrorist groups.

"At this time, we have no indication he was inspired by or directed by anyone but himself," FBI Special Agent in Charge Ed Reinhold said at the news conference.

NPR's Dina Temple-Raston says law enforcement officials are considering whether "something closer to home, like a breakup or something more personal, may have motivated the attack."

Abdulazeez reportedly was arrested in April on suspicion of driving under the influence and was due in court in two weeks.

"They are trying to rule out whether this was, in essence, a 'death by cop' case — i.e., that Abdulazeez wanted to die in this attack not as a martyr, but for some other reason," Dina says.

This case ticks off boxes that Americans associate with terrorism — the main and controversial one is that it was perpetrated by a Muslim. But the fact that Abdulazeez lived what seemed to be, at least outwardly, a fairly ordinary suburban life and even the fact that he used a gun — which Lakoff says are as "American as apple pie" — rather than, say, a bomb, don't quite fit with what Americans equate with terrorism.

"What really makes people nervous, more than terrorism, is when you can't pin a word down," Lakoff says. "I think we often have it in our minds that the great majority of words have specific meanings, and if you see something, you say, 'Oh that is a case of X,' X being a particular word with a particular meaning and that this is almost always the case. And in fact, particularly for things that are very important to us and have a lot of emotional baggage behind them, very often categories merge."

So, the shootings in Chattanooga? Almost everyone will define it as a crime. But is it a terrorist act? Even Bapat and Lakoff couldn't decide.

"Having a precise definition of a word gives you a kind of power over not only the word, but over the thing itself," Lakoff says. "[People think] if we could only pin down precisely whether something is an act of terrorism or a hate crime, or just a simple crime or a war, in other cases, we would have a handle on it, we would know what to do. We would be able to feel more comfortable about what we should do and less nervous, less frightened in general."

"But practically," he says, "it really doesn't matter in a sense. Because the crime is the crime. People were killed, and each one of those is tragic whether or not we classify it as terrorism or not."