Accessibility links
FBI: San Bernardino Shooting Is Being Investigated As A Terrorist Act : The Two-Way David Bowdich of the FBI's Los Angeles office said at a news conference that "there's a number of pieces of evidence that has pushed us off the cliff."

FBI: San Bernardino Shooting Is Being Investigated As A Terrorist Act

FBI: San Bernardino Shooting Is Being Investigated As A Terrorist Act 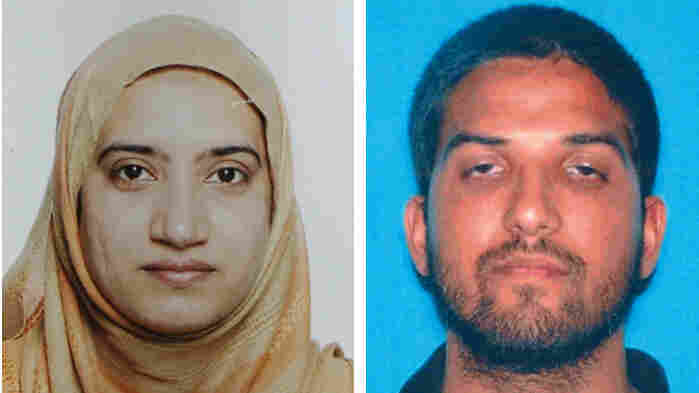 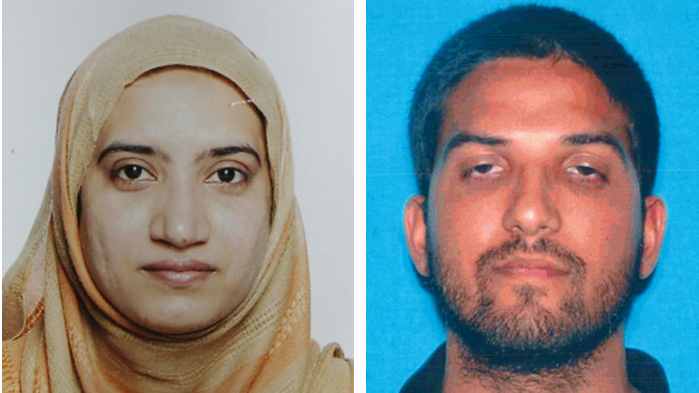 A photo provided by the FBI shows Tashfeen Malik (left) and a photo provided by California Department of Motor Vehicles shows Syed Farook, who attacked a holiday gathering of county workers in San Bernardino, Calif., this week.

FBI, left, and California Department of Motor Vehicles via AP

The FBI said it is officially investigating Wednesday's mass shooting that killed at least 14 people in San Bernardino, Calif., as a terrorist act.

"We are now investigating these horrific acts as an act of terrorism," David Bowdich, assistant director of the FBI's Los Angeles office, announced during a news conference Friday. He said the shooters had attempted to erase their digital footprints and that agents had recovered two deliberately destroyed cellphones. 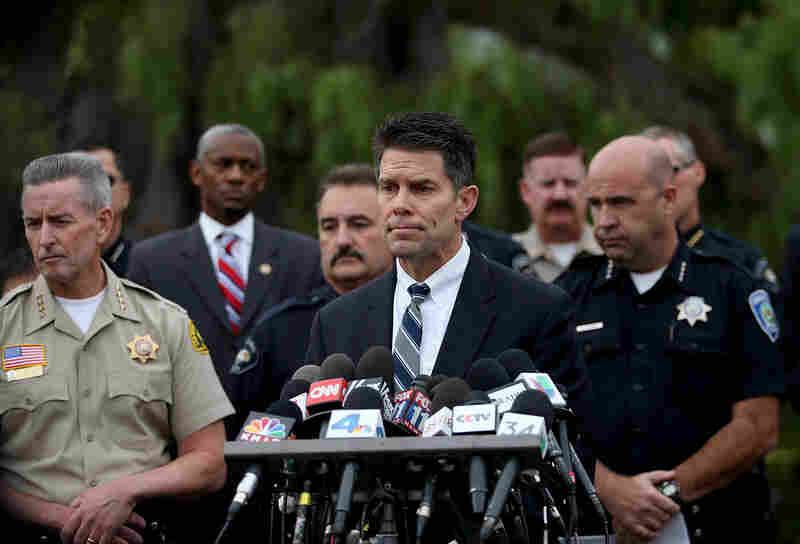 Federal Bureau of Investigation assistant director David Bowdich speaks during a news conference on Friday in San Bernardino, Calif. The FBI is officially investigating the attack carried out by Syed Farook and his wife Tashfeen Malik as an act of terrorism. Justin Sullivan/Getty Images hide caption 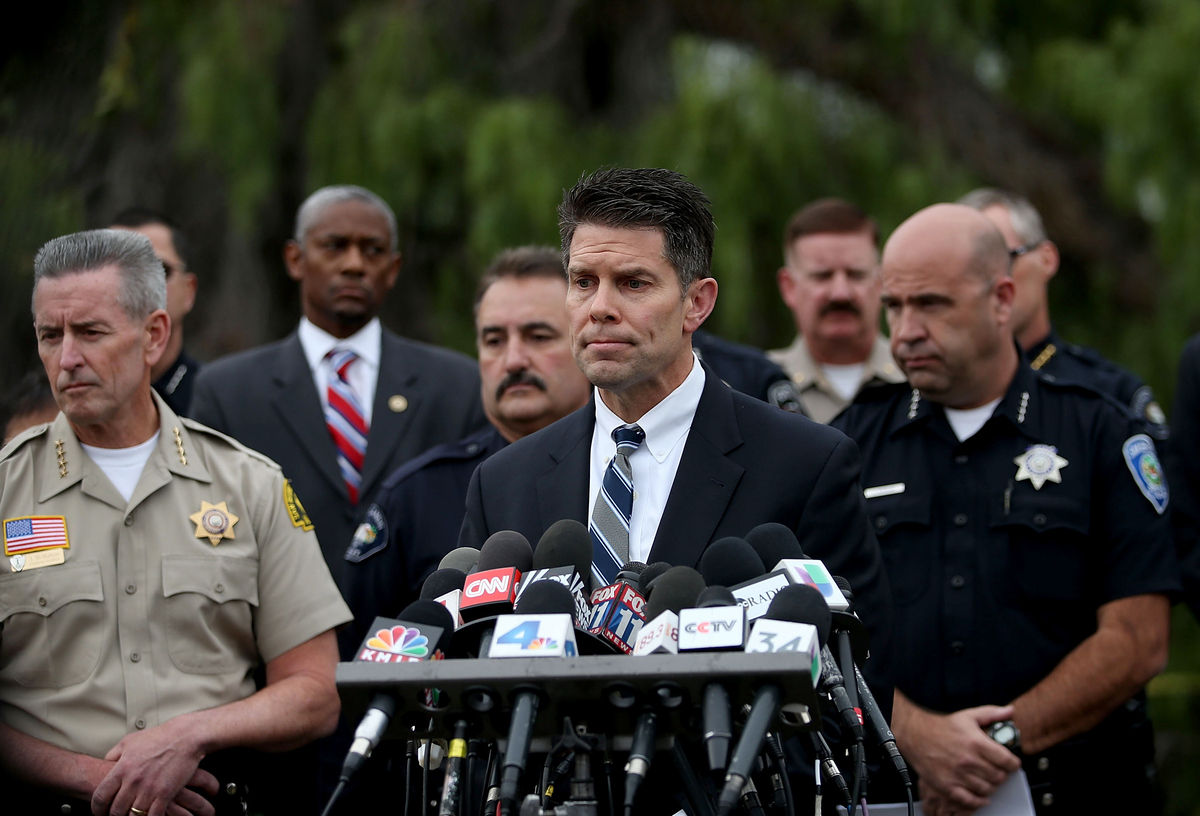 Federal Bureau of Investigation assistant director David Bowdich speaks during a news conference on Friday in San Bernardino, Calif. The FBI is officially investigating the attack carried out by Syed Farook and his wife Tashfeen Malik as an act of terrorism.

In a later press conference, FBI director James Comey said there was no indication that the attackers are part of a larger group or network, though he said there were some "indications of radicalization" by the attackers and "potential inspiration by foreign terrorist organizations." Comey also said the FBI had "nothing in [its] holdings" about the two killers.

"There were no contacts between either of the killers and subjects of our investigations that were of such a significance that it raised these killers up onto our radar screen," he said. Comey stressed that the investigation was only two days old, saying: "There is much about this that doesn't make sense ... for even those of us who do this for a living."

Earlier, a source with knowledge of the investigation told NPR that Tashfeen Malik, one of the shooters, had pledged allegiance to the leader of ISIS on a Facebook page around the time of the attack. Malik, along with her husband, Syed Rizwan Farook, carried out the bloody attack at the Inland Regional Center in San Bernardino.

The federal source who confirmed the development to NPR's Carrie Johnson also warns that the statement on social media should not be seen as evidence that the attack was coordinated or ordered by the extremist group.

The source told Carrie that Malik, 27, had pledged her support to ISIS leader Abu Bakr al-Baghdadi by using a Facebook account that was created under an alias.

Citing details such as the crude explosive devices that investigators say were built by Malik and Farook, Carrie's federal source said that as of now, investigators are exploring the possibility that Malik and Farook may have essentially "self-radicalized" after being inspired to action by ISIS.

Malik and Farook died in a gun battle with police hours after the attack on the social services center in San Bernardino.

Last night, the authorities released the names of the 14 people who died in the attack; their ages range from 26 to 60.

A massive effort is now underway to learn more about both Farook, who was born in the U.S. and was an employee at the center, and Malik, who came to the U.S. in July of 2014 as Farook's fiancee, with a Pakistani passport. The couple had a 6-month-old child.

Two attorneys who say they are represent the Farook family, Mohammad Abuershaid and David Chesley, said Friday the killers' family was shocked by the series of events. The lawyers warned against jumping to conclusions about the attackers, repeatedly emphasizing that the FBI had found no evidence to indicate the shooters were connected with a terrorist group.

While details about the shooters emerged Friday morning, an unusual occurrence took place at the couple's former residence. The landlord at the building where Malik and Farook lived in Redlands, Calif., briefly opened their home to the media Friday, resulting in a stream of live images coming from an apartment that had only moments beforehand been boarded up.

The resulting scenes prompted questions of both journalistic ethics and legality, as reporters, photographers and even passersby had a chance to go through a residence that has been a key focus of federal and local investigators' attempts to learn more about the suspects in a mass shooting, just two days after the crime. 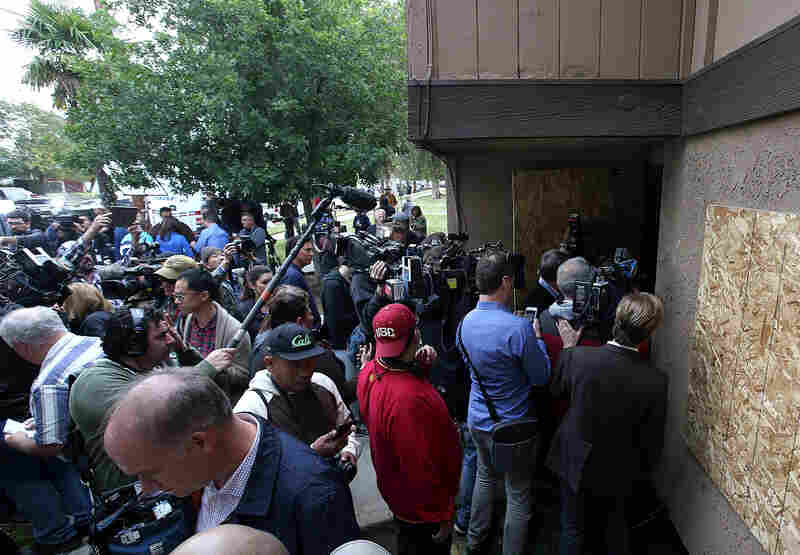 Dozens of members of the media stand in front of the home of shooting suspects Syed Farook and Tashfeen Malik on Friday. Justin Sullivan/Getty Images hide caption

An MSNBC reporter broadcast live from inside the apartment, holding up snapshots of children and other people that had been on a counter.

Reports from MSNBC and CNN cited the presence of official documents such as driver's licenses and passports in the apartment. Images from the scene showed reporters poring over records, going through papers and noting the presence of religious items.

Of the media's entry, NPR's Nathan Rott reports that the landlord "says he opened it to clean earlier today. Gave media permission to enter. Didn't expect this."

The landlord tells the Los Angeles Times that the FBI had told him they were finished with the property.

Building owner, Doyle Miller, said FBI told him about 8:30 p.m. he could come. "They turned everything over in there. There's nothing left."

When asked about the media tour of the attackers' house at the press conference, Bowdich said: "We executed a search warrant on that apartment and last night we turned that over back to the residents. Once the residents have the apartment and were not in it anymore we don't control it."