Accessibility links
From Oval Office, President Obama Vows U.S. Will Defeat ISIS : The Two-Way "The threat from terrorism is real, but we will overcome it," Obama said, aiming to calm American anxiety over the danger posed by the Islamic State. He warned Americans not to give in to fear. 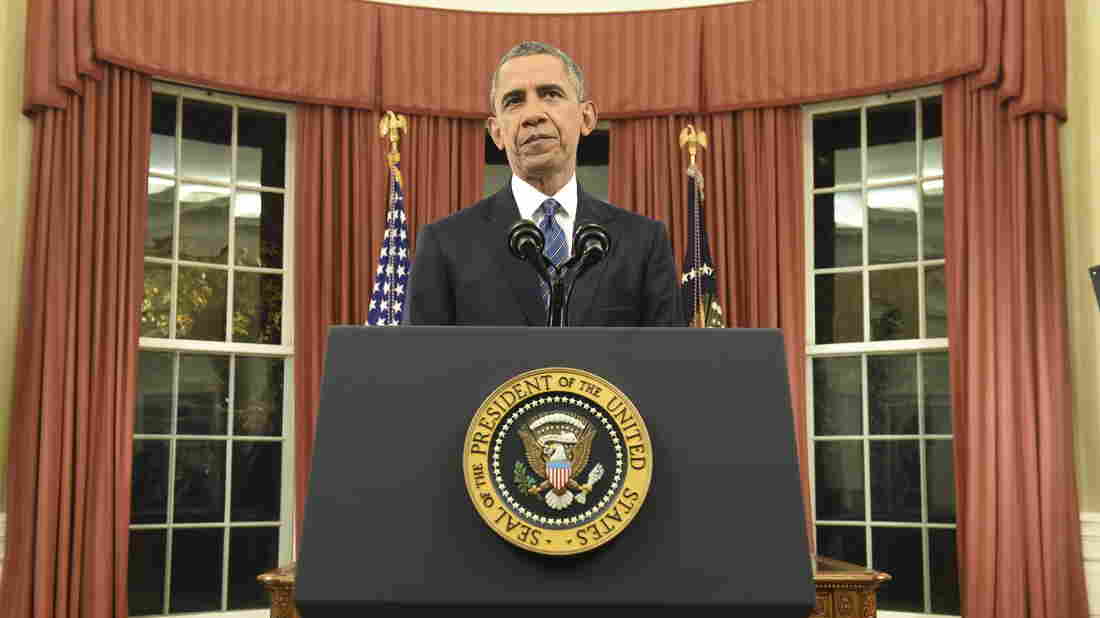 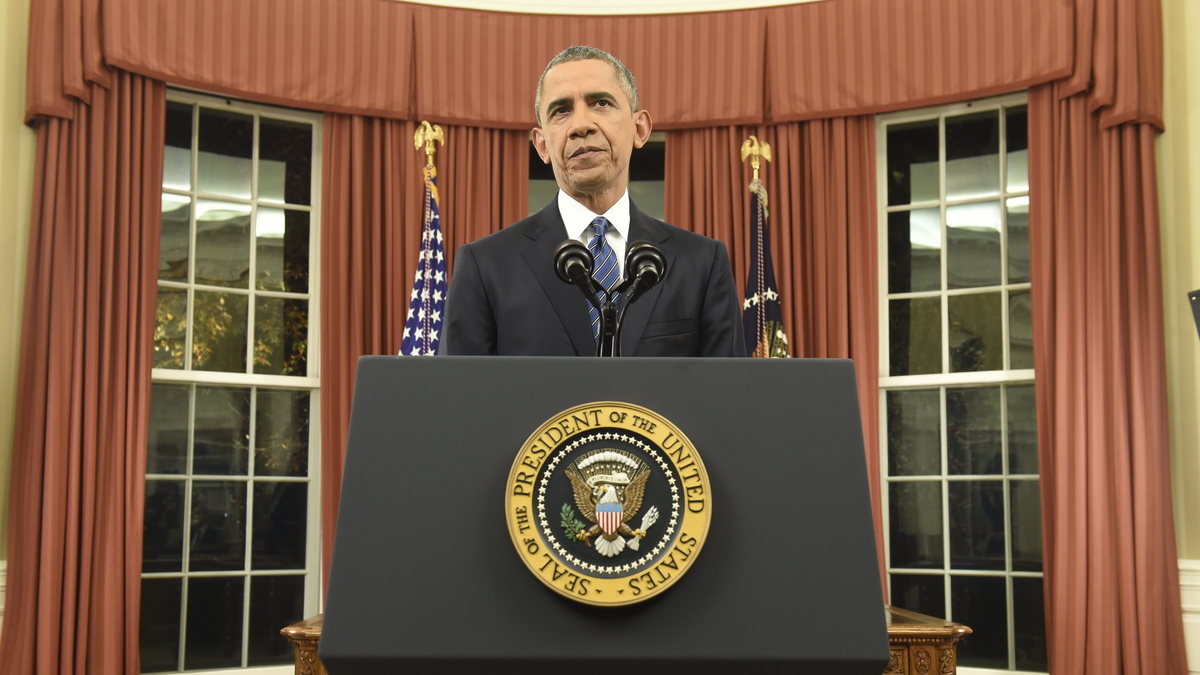 President Barack Obama addresses the country from the Oval Office on December 6, 2015, in Washington, D.C.

In a prime-time speech from the Oval Office Sunday night, Obama said that the United States would defeat the threat of terrorism — without compromising American values.

Obama began his third Oval Office address by remembering the 14 Americans who died in Wednesday's attack in San Bernardino, California.

He noted that the FBI has no evidence that the attack was directed by a terrorist organization, but said it was clear the shooters had gone down the "dark path of radicalization."

"This was an act of terrorism," Obama said, "designed to kill innocent people."

He praised the work of counterterrorism officials who have "disrupted countless plots," and noted that terrorist attacks have shifted since Sept. 11 — changing from elaborate plots to less complicated attacks, like shootings at Fort Hood, Texas in 2009 and Chattanooga, Tenn., earlier this year, as well as the attack in San Bernardino.

"The threat from terrorism is real, but we will overcome it," Obama said. "Our success won't depend on tough talk or abandoning our values or giving in to fear."

He said victory against the Islamic State would involve hunting down "terrorist plotters" around the world, providing training and equipment to Iraqi and Syrian forces fighting the Islamic State, disrupting the organization's funding and recruitment, and pursuing a cease-fire and political resolution in the Syrian war.

But the president later added that it's important that the U.S. not get involved in an extended ground war in Iraq or Syria.

At home, Obama said, he has ordered a review of the visa program the female shooter in San Bernardino used to enter the country, and urged technology and law enforcement leaders to "make it harder for terrorists to use technology to escape from justice."

He called for Congress to tighten restrictions on guns — prohibiting those on the no-fly list from purchasing weapons, and making it harder for anybody to purchase assault weapons — and put stronger screening in place for those who come to America without a visa.

He also called for Congress to authorize the use of military force against ISIS, while noting that he has been ordering the military to strike Islamic State targets for over a year.

The president exhorted the American people not to "turn against one another" — in particular, not to treat the fight against terrorism as a war between America and Islam.

"ISIL does not speak for Islam," Obama said, using another acronym for the Islamic State. "They are thugs and killers, part of a cult of death." He also noted that most victims of terrorism are also Muslims.

He called for Muslims to confront radical ideology. But he also said it was crucial for all Americans to reject discrimination, religious tests and "proposals that Muslim-Americans should somehow be treated differently, because when we travel down that road, we lose."

The speech comes during a period of national anxiety, following a massive terrorist attack in Paris and the shooting in San Bernardino.

The setting and timing of the address signal its significance, as NPR's Domenico Montanaro reported earlier Sunday:

Underscoring its importance, this will be just Obama's third Oval Office address. The other two were about the Deepwater Horizon oil spill in the Gulf of Mexico and the end of combat operations in Iraq, both in 2010. Obama has addressed the nation several times since then, but has preferred other backdrops like the White House East Room where he announced the death of Osama Bin Laden in 2011.

Sundays in America mean church and professional football. Obama will squeeze in his address — expected to last between just 10 and 15 minutes, according to White House staff — between games. The president's speech is scheduled to begin soon after 8 p.m. EST, which is sandwiched right between the late afternoon slate of football games, which end around 7:30 p.m. EST, and Sunday Night Football.

In a departure from previous Oval Office addresses, Obama delivered his speech from a podium, instead of from behind his desk.

He concluded his speech by reiterating that the U.S. will defeat the threat of terrorism.

"We are on the right side of history," the president said. "We were founded upon a belief in human dignity: That no matter who you are, or where you come from, or what you look like or what religion you practice, you are equal in the eyes of God and equal in the eyes of the law ... Let's make sure we never forget what makes us exceptional. Let's not forget that freedom is more powerful than fear. ...

"So long as we stay true to that tradition, I have no doubt that America will prevail."

Video of the speech is archived below, via the White House.