Accessibility links
Abby Wambach's Soccer Career In 8 Iconic Moments : The Two-Way When the world's top-scoring international soccer player takes to the field Wednesday, it will be for the last time. To mark her retirement, here are some highlights from her career. 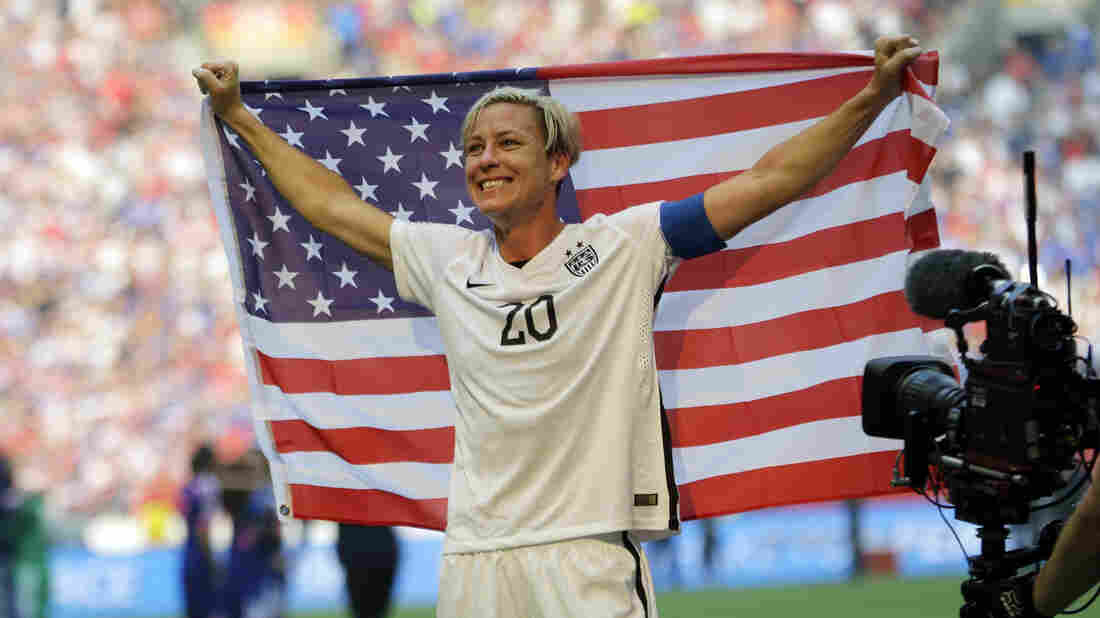 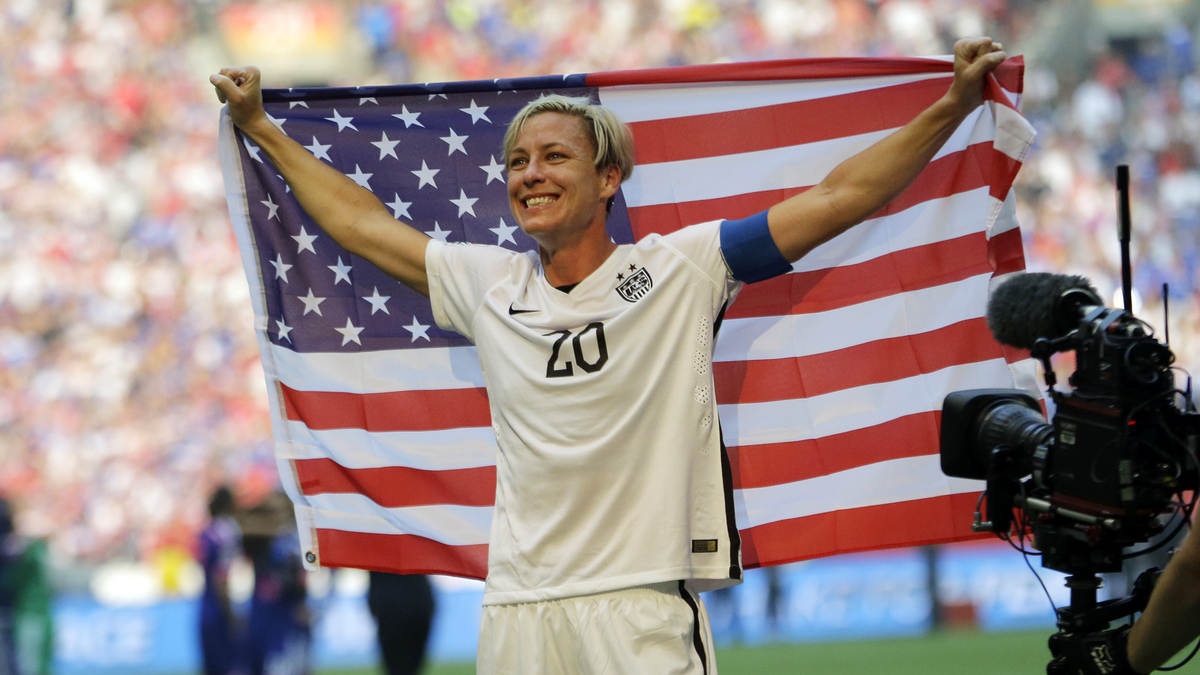 The name Abby Wambach is so closely intertwined with U.S. women's soccer that it's hard to mention one without the other.

Wambach, who first donned the red, white and blue in 2001 — before her record-shattering college career at the University of Florida was even over — helped the U.S. women's national team to two Olympic gold medals and a World Cup title. She also racked up individual accolades: She won the U.S. Soccer Federation's Soccer Athlete of the Year award six times, was named FIFA's Player of the Year in 2012, and became the world's top scoring international soccer player — for men and women.

Off the field, too, Wambach made her presence known as an outspoken trailblazer for female athletes and as an LGBT icon for simply being herself. As she prepares to play her last game for the U.S. national team Wednesday night in New Orleans, here's a look back at eight major moments in her career.

In a friendly game against Germany in Chicago, Wambach was subbed in at the 76th minute. Mia Hamm had just notched her second goal of the game to put the U.S. up 4-1, and the University of Florida senior ran onto the field to replace Tiffeny Milbrett. Skip to around the 4:40 mark in this video to see that moment.

In the 2004 Athens Olympics, the U.S. was deep into extra time against powerhouse Brazil with the game heading toward penalty kicks. In the 112th minute, Wambach managed to knock home a goal off a corner kick from Christine Lilly to win the game — and her first gold.

The Washington Post characterized the game as the end of an era for the first generation of U.S. female soccer stars, but the beginning of an exciting new one. Here's sportswriter Barry Svrluga with the play-by-play on Wambach's goal:

"Lilly, 33, took a corner kick from the left side, and launched the ball across the penalty area, where Wambach lunged to put her head to it. It ricocheted off a Brazilian defender at the goal line, and bounced into the net. Wambach, a former Washington Freedom star who is considered one of the cornerstones of the next generation of women's players, immediately sprinted toward midfield, where a band of American fans furiously waved flags and celebrated with her."

Down 2-1 in the quarterfinal game against Brazil in extra time, the U.S. women's national team was seconds away from being eliminated from the World Cup. Commentator Ian Darke had even called it over, saying: "It will go down as the USA's worst performance ever in the women's World Cup." Moments after Darke spoke those words, the U.S. team launched one last equalizing attempt. Near midfield, Carli Lloyd sent the ball to Megan Rapinoe, who lobbed it into the box where Wambach was waiting by the far post. She headed it to the back of the net in the 122nd minute to send the game to penalty kicks, and the U.S. went on to win. Although the stars and stripes would eventually lose to Japan in the final, Wambach's header was voted the greatest goal in FIFA women's World Cup history, and it earned the moniker: "The Header Heard Round The World."

Wambach won the most prestigious award in soccer when she was named FIFA Women's World Player Of The Year for 2012. She beat out her teammate Alex Morgan and Brazilian star Marta for the trophy. Barcelona and Argentina's Lionel Messi won the award for the men.

"It's fantastic," Wambach told FIFA shortly after accepting the award. "There haven't been many times in my life where I've been completely speechless, but I'm really having trouble finding the right words. Honestly, when Hope [Solo] said my name, I thought she'd made a mistake. I was sure that Alex [Morgan] would win."

When it came to winning golden baubles, 2012 was a big year for Wambach. Just a few months before winning Player of the Year, Wambach tweeted that she had received a gold card from Chipotle guaranteeing her free burritos for life.

When the U.S. team squared off against South Korea in a friendly in New York, everyone knew there was a record on the line. Wambach came in with 156 international goals, just two short of Hamm's world record of 158. It took less than half an hour for Wambach to score four goals. She broke the record in spectacular fashion and become the top international scorer in the world for both men and women.

"I'm just so proud of her," Hamm said, according to Sports Illustrated. "Just watching those four goals, that's what she is all about. She fights for the ball, she's courageous and she never gives up. Her strength and perseverance is what makes her so great and it's what defenders and opposing teams fear."

Some 40 elite international women's soccer players filed a lawsuit against FIFA and the Canadian Soccer Association over the decision to play the 2015 women's World Cup on artificial turf instead of grass. The players alleged that forcing women to play on artificial turf while the men's World Cup was played on grass — widely considered a superior playing surface — amounted to gender discrimination.

Although the players eventually dropped the lawsuit — and the U.S. went on to win the World Cup — Wambach has continued to be outspoken about the risks and disadvantages of playing on artificial turf.

Wambach, who married her wife, former pro soccer player Sarah Huffman, in a private ceremony in Hawaii in 2013, was asked about the moment after winning the World Cup.

Oct. 27, 2015: Celebrates at the White House and announces retirement

Wambach and her teammates were honored at the White House after winning the World Cup. President Obama acknowledged Wambach individually:

"I'm not sure [Abby] could have written a better ending: a world champion at last, draped in the Stars and Stripes, showing us all how far we've come -– on and off the field –- by sharing a celebratory kiss with her wife." 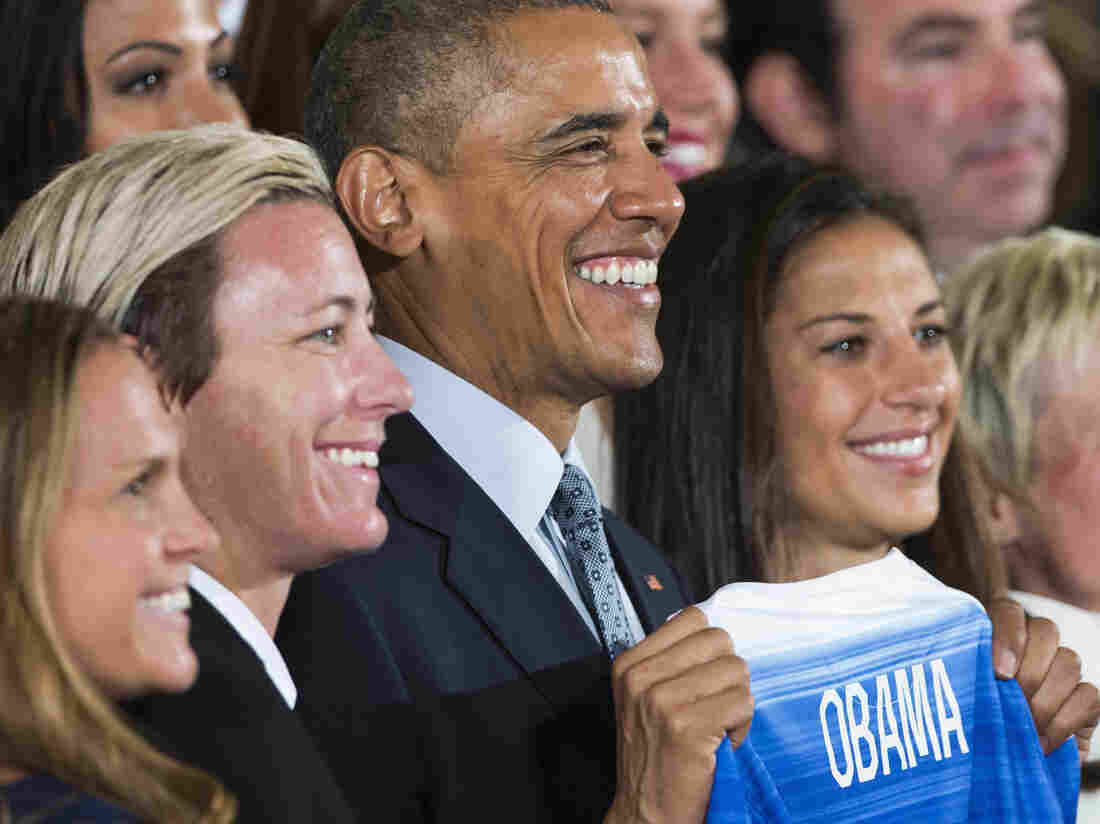 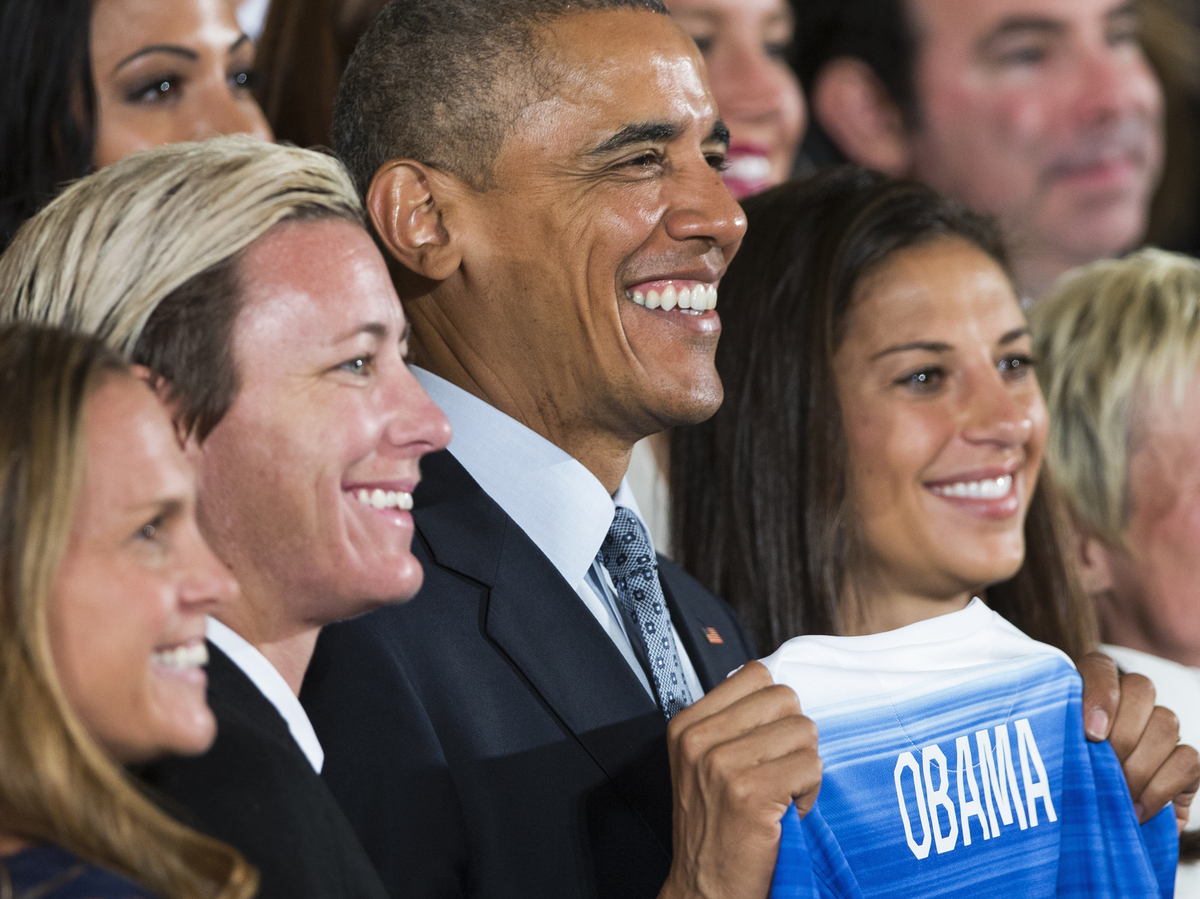