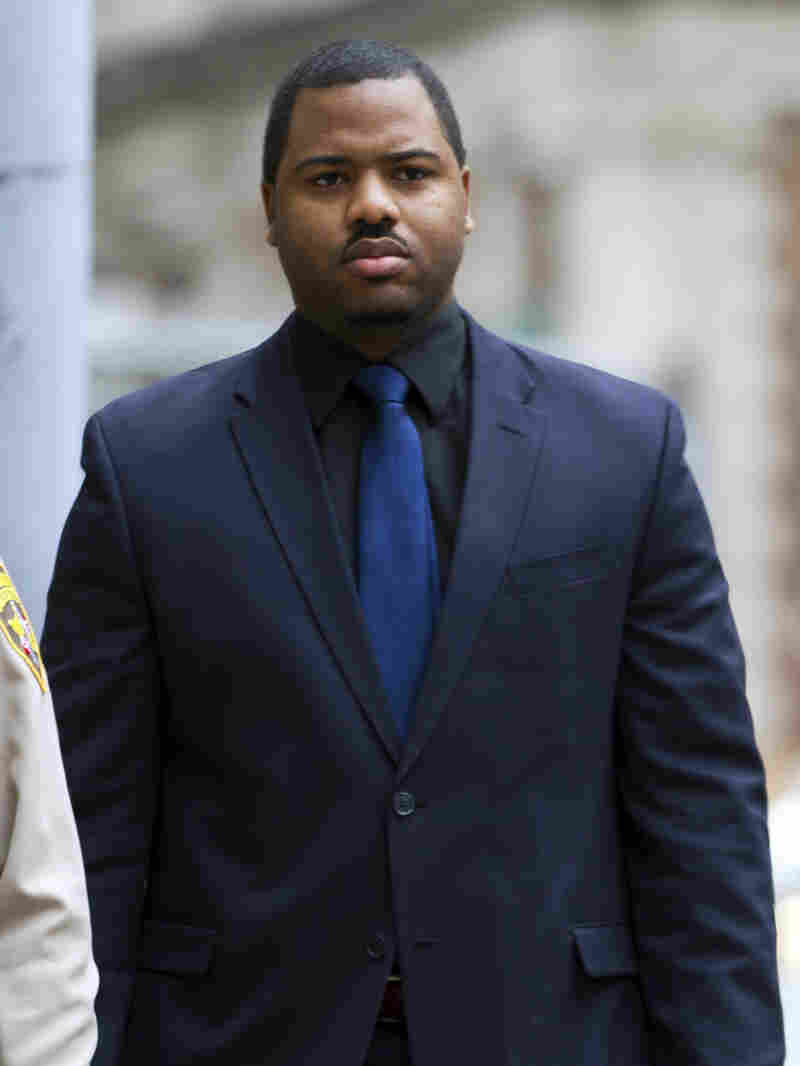 Officer William Porter's trial has ended in a mistrial. He is one of six Baltimore city police officers charged in connection with the death of Freddie Gray. His case is the first to come to court. Jose Luis Magana/AP hide caption 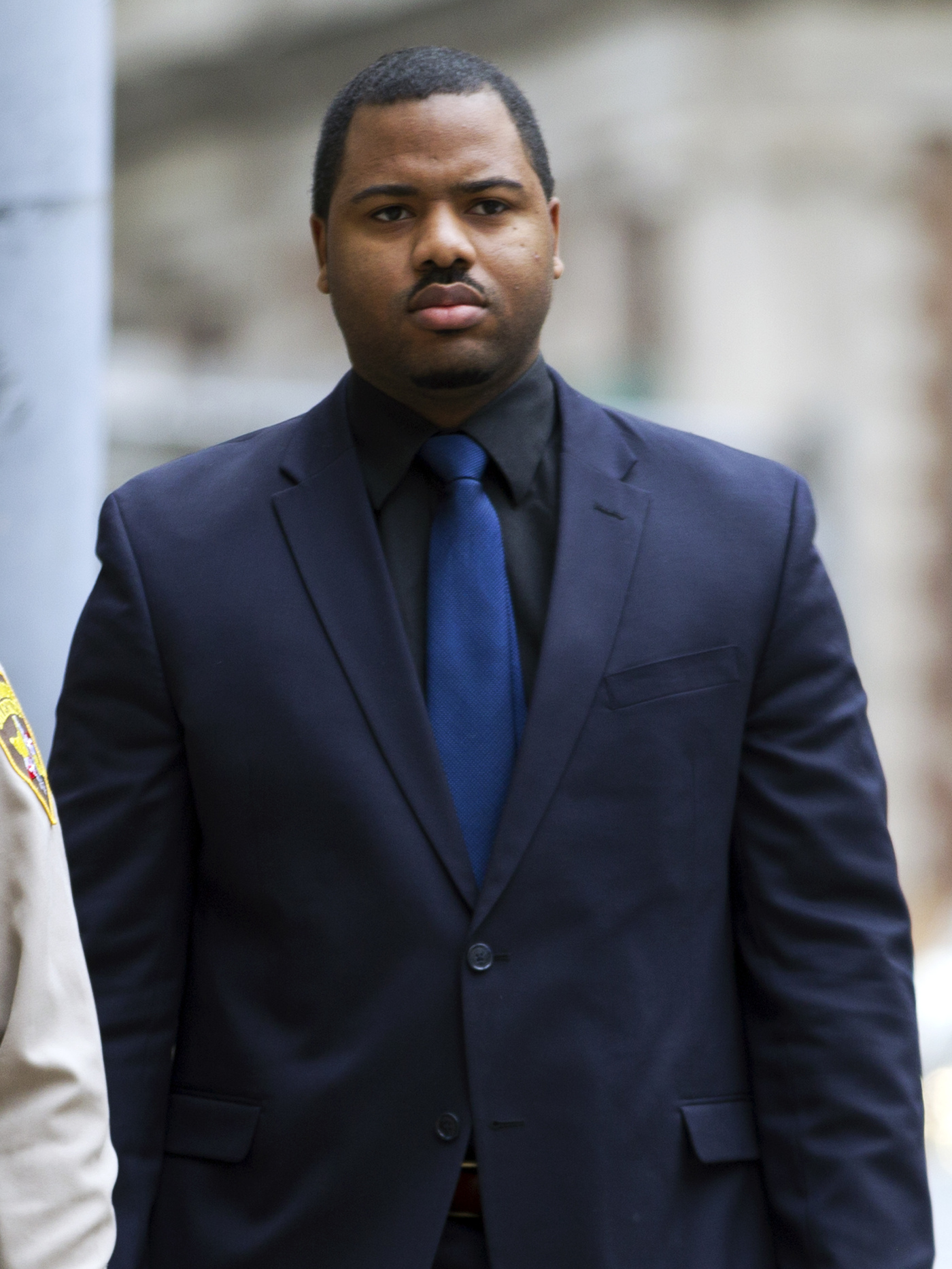 Officer William Porter's trial has ended in a mistrial. He is one of six Baltimore city police officers charged in connection with the death of Freddie Gray. His case is the first to come to court.

One day after jurors in the trial of Baltimore Police Officer William Porter announced they were deadlocked, the judge in the case has declared a mistrial. The jury couldn't reach a verdict on involuntary manslaughter and three other charges Porter faced over the death of Freddie Gray last April.

On Tuesday, Judge Barry G. Williams had urged jurors to reach a compromise without abandoning their own judgment, after they sent a note saying they couldn't reach a verdict.

On Wednesday, Williams "thanked them for their time and dismissed them," NPR's Jennifer Ludden reports, hours after the judge denied the jurors' request to see a witness transcript.

The decision leaves prosecutor Marilyn Mosby to decide whether to pursue further criminal charges against Porter. Her office released a statement refusing to comment, citing a gag order on all cases related to Gray, The Baltimore Sun reports.

Five other officers are slated to go on trial in the Gray case next month, on a range of charges that include murder.

The lawyer representing the family of Freddie Gray says the fact that the judge declared a mistrial says nothing about whether a verdict will be reached in a second trial. Billy Murphy said the hung jury "should not be viewed as an indication that it may be hard to reach a verdict. [...] Most hung juries get retried and those that get retried are usually 70 percent or so in favor of conviction, about 20 some percent in favor of not guilty and a very small percent result in hung juries a second time."

Speaking to reporters Friday evening, Murphy also said the family was disappointed that there was no verdict, but are not angry.

"If the family's not angry, no one else should be angry," he said. "The family wants everyone to remain calm, they want everyone to understand what just happened and to make sure that their tempers don't get the best of them and that their emotions remain in check. This is a very important stage in the case."

The NAACP issued a statement on the judge's declaration of a mistrial. Here it is, in part:

"While we respect the legal process and still await justice, the death of Freddie Gray and other tragedies continue to point to the need for systemic reform both within the municipal police departments and statewide. We call on the community to continue the protests while using all of the available nonviolent means to seek justice for a violent death. We still believe that Officer Porter and his fellow officers failed in their fundamental responsibility and we continue to wait for justice."

Mayor Stephanie Rawlings-Blake has issued a statement on the judge's declaration. It reads, in part:

"This is our American system of justice. Twelve Baltimore residents listened to the evidence presented and were unable to render a unanimous decision. As a unified city, we must respect the outcome of the judicial process. In the coming days, if some choose to demonstrate peacefully to express their opinion, that is their constitutional right. I urge everyone to remember that collectively, our reaction needs to be one of respect for our neighborhoods, and for the residents and businesses of our city. In the case of any disturbance in the city, we are prepared to respond. We will protect our neighborhoods, our businesses and the people of our city."

As we reported Tuesday, "Officer Porter, 26, is a two-year veteran of the Baltimore police force. Prosecutors say he neglected to put a seatbelt on Gray when he was arrested and didn't call for medical help for Gray — who broke his neck while in police custody and later died."

Memories of the fires and looting that accompanied street protests over the case last spring have forced Baltimore's community leaders to brace for potential reactions to a verdict in the case.

Rep. Elijah Cummings called for calm, with member station WYPR quoting Cummings telling the people of Baltimore "our future as a more just community will depend more on our actions than it will upon the decision of Officer Porter's jury."