Accessibility links
Worries Mount In Poland As Parliament Moves To Upend Checks And Balances : The Two-Way The right-wing Law and Justice party controls Parliament and the presidency. Now it's working to restrict the power of the nation's highest court, alarming women's rights and human rights advocates. 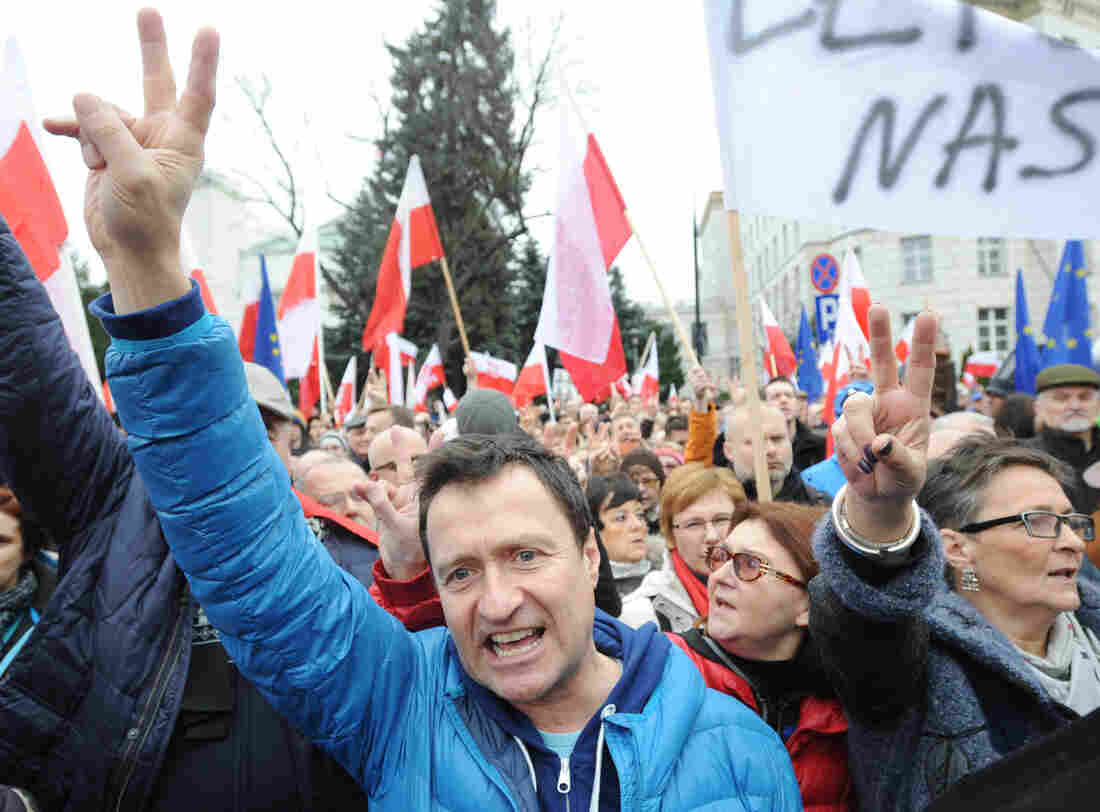 Protesters shout slogans during an anti-government demonstration in Warsaw, Poland, on Dec. 19. Thousands of Poles have protested the government's plans to curb the power of the Constitutional Tribunal, a check on the ruling party's authority. The bill in question passed the lower house of Parliament on Tuesday. Alik Keplicz/AP hide caption 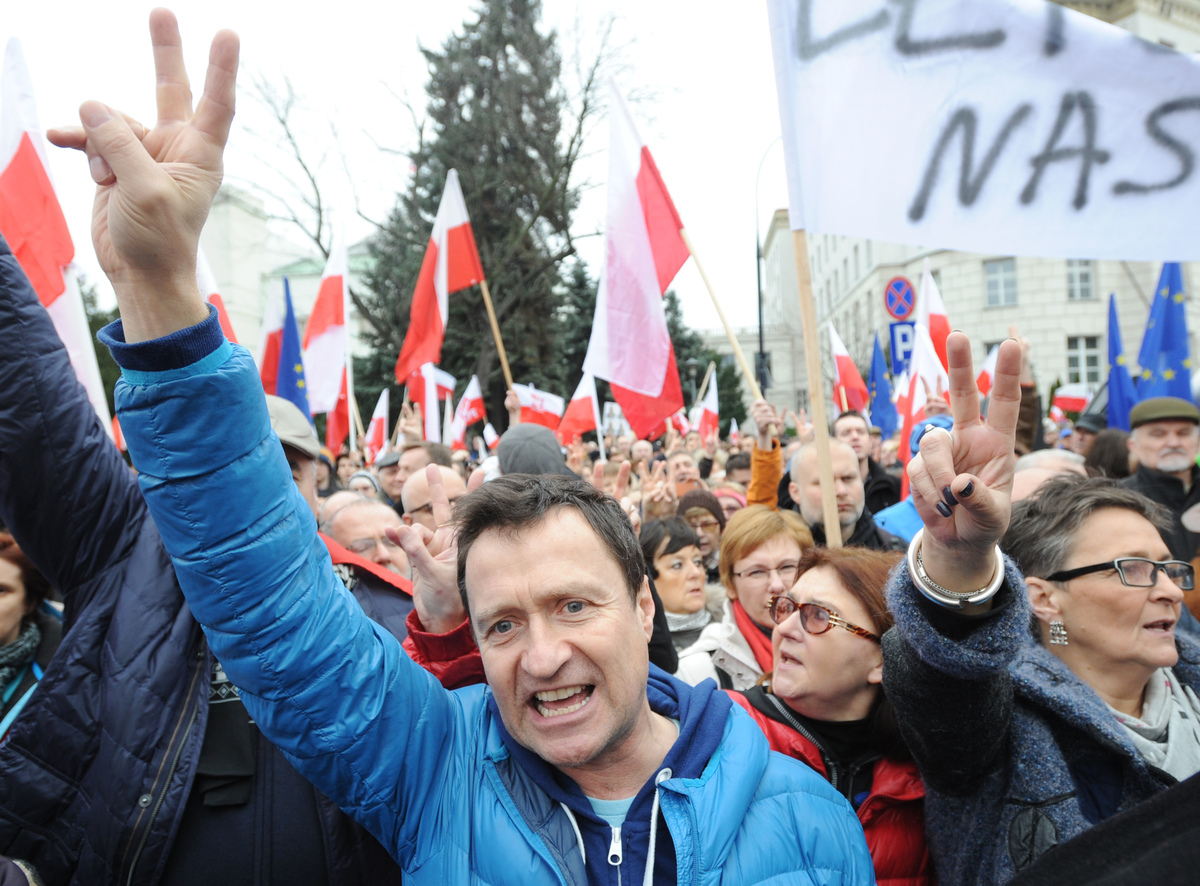 Protesters shout slogans during an anti-government demonstration in Warsaw, Poland, on Dec. 19. Thousands of Poles have protested the government's plans to curb the power of the Constitutional Tribunal, a check on the ruling party's authority. The bill in question passed the lower house of Parliament on Tuesday.

Human rights and women's rights advocates are criticizing the Polish government — and raising concerns about the country's future — after the new ruling party moved to change the nation's system of checks and balances.

The conservative Law and Justice party, which came into power in November, controls both houses of Parliament and also holds the presidency. The party is known as nationalist, pro-Catholic, anti-immigrant and skeptical of European unity. It promotes greater economic support for the poor.

The bill that's raising eyebrows — and concerns — affects Poland's Constitutional Tribunal, which steps in to determine whether contested laws violate the Polish Constitution.

Members of the tribunal are appointed by the Parliament, the Associated Press explains, and many current members were selected by a centrist party.

"The last time Law and Justice held power, from 2005 to 2007, it saw its ambitions for deep change stifled by that legislative court," the wire service writes.

This time, Law and Justice argues that its overwhelming victory at the polls gives it a mandate from the people to overhaul Poland's policies — and that to do so, lawmakers must prevent opposition from the tribunal.

So the new legislation would make it harder for the tribunal to reject a law. It requires 13 of the 15 judges to be present — far more than currently required — and at least a two-thirds majority, instead of a simple majority. It would also institute a waiting period of several months before the court could make a decision, Reuters reports.

The legislation passed the lower house of Parliament on Tuesday night and is expected to win approval in the Senate and from the president.

After that, the tribunal could hypothetically declare the law unconstitutional. However, the law is written to go into effect immediately, Reuters reports, so the tribunal would have to meet the arduous new requirements to reject it.

Thousands of demonstrators have taken to the streets over the past two weeks to protest — and sometimes to support — the planned changes.

The deep disagreement made for a dramatic debate in Poland's lower house of Parliament on Tuesday, the AP reports:

"One after one, opposition lawmakers stood before the hundreds of lawmakers gathered together to denounce the legislation as the death knell for Poland's constitutional and democratic order.

"Then a Law and Justice lawmaker, Stanislaw Piotrowicz, stood up and denounced those who claim to be fighting for democracy.

" 'The defense of democracy is just a smokescreen. You are defending dark interests,' he told opposition lawmakers, sparking an uproar in the chamber and chants of 'down with communism!' "

Women's rights groups worry that, with no checks on its power, Law and Justice will criminalize abortion, restrict sex education and withdraw from a European convention on preventing violence against women, the Guardian reports.

Law and Justice also aims to consolidate its hold over Poland's state media, the AP writes, "which is expected to bring purges of journalists who are critical of the new government."

Poland is a young democracy: The country overthrew communism and established its Constitution in 1989.

One of the heroes of that era, Nobel Peace Prize winner and former Polish President Lech Walesa, is among the fervent critics of Law and Justice's planned change to the tribunal, reports the AP.

"This government acts against Poland, against our achievements, against freedom, against democracy," Walesa said Wednesday.