Accessibility links
Major Rivers In Missouri Cresting Amid Historic Flooding : The Two-Way The worst may soon be over for Missouri residents as water levels start to drop. Now, they are beginning to take stock of the damage. 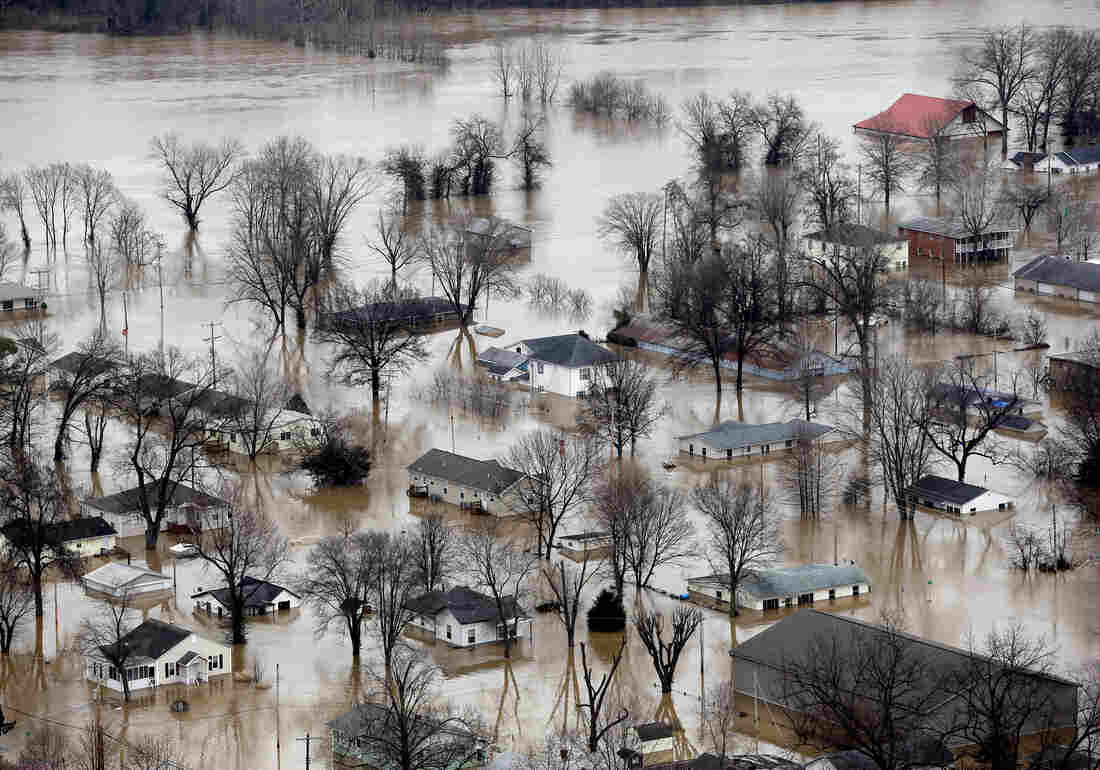 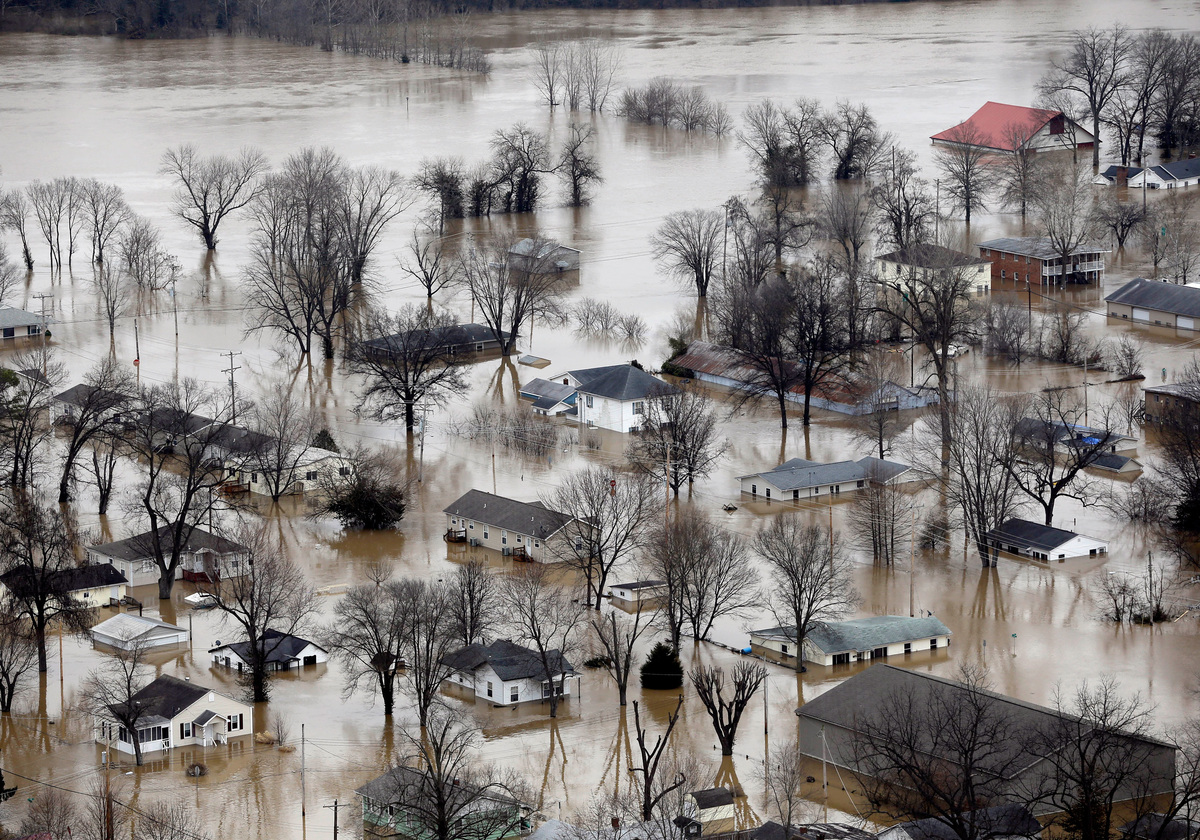 Flooding in Missouri and Illinois has killed at least 20 people and driven hundreds from their homes.

But with dry weather forecast for the next few days and after the Meramec River crested Thursday morning, the worst may be over, as St. Louis Public Radio's Maria Altman told our Newscast unit.

"The flooding along the Meramec shattered records, coming in more than 4 feet above previous records set in 1982," Maria says. "In the town of Valley Park, officials worried a new levee might be overtopped, and the mayor ordered the evacuation of residents from low areas."

The Army Corps of Engineers told Maria that water levels "came close but did not spill over."

This graphic from the National Weather service shows how Meramec River levels smashed a previous record earlier Thursday — and how water levels are already dropping. 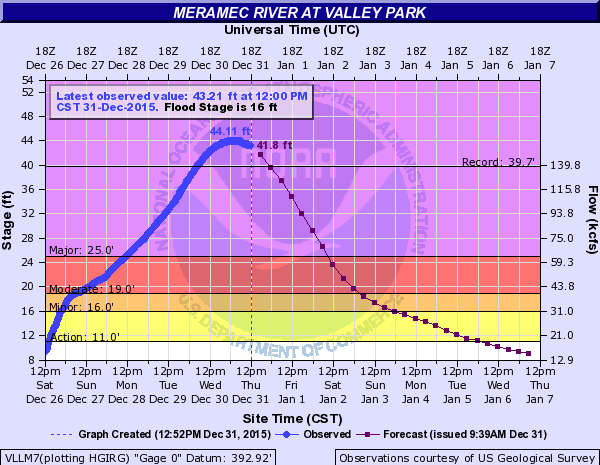 Franklin County Presiding Commissioner John Griesheimer said the recent flooding "is really the worst in the history of Franklin County" because "the Missouri, Meramec and Bourbeuse [rivers] have swelled to such high levels."

And even though the river is dropping, "it will leave behind a mess," the St. Louis Post-Dispatch reported.

"More than 300 homes were flooded in Pacific, where the river reached the railroad tracks in the heart of old downtown. In Eureka, firefighters rescued more than 50 people and their pets, said Eureka Fire Protection District spokesman Scott Barthelmass."

The nearby Mississippi and Missouri rivers will likely not break historic records, the Post-Dispatch reported.

"The Mississippi and Missouri rivers reached major flood levels in the greater metro area, forcing evacuations in the fertile bottomland of St. Charles County, but stayed well below historic highs. The Mississippi at St. Louis was forecast to crest Thursday at 42.5 feet, 12.5 feet over flood stage at the Arch and just shy of the 1973 flood, which would remain the city's second-worst.

"At St. Charles, the Missouri was expected to crest Thursday at 35.2 feet, 10 feet over flood stage. That would tie for 12th highest on record there."

The Mississippi River is projected to drop through the weekend and continue falling through mid-January. 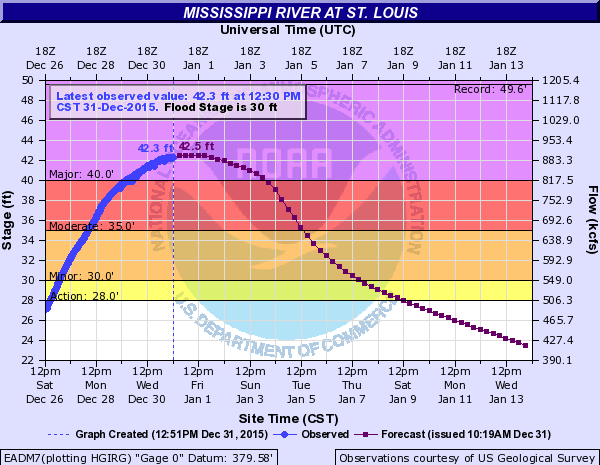 Now, area residents like Carolyn Davis are taking stock of the damage. St. Louis Public Radio says Davis went to a bluff overlooking her town, Pacific. "'You know you're looking at landmarks that have never been under — the opera house or the florist shop that's been there forever. You know, restaurants — families and people. It's just crazy."