Accessibility links
Of Ranchers And Rancor: The Roots Of The Armed Occupation In Oregon : The Two-Way An armed group has taken over a federal building in Oregon. Here's a primer on the "paradox" behind the situation, the court case that gave it a spark — and how the Oklahoma City bombing is involved.

3:45
Of Ranchers And Rancor: The Roots Of The Armed Occupation In Oregon 3:45 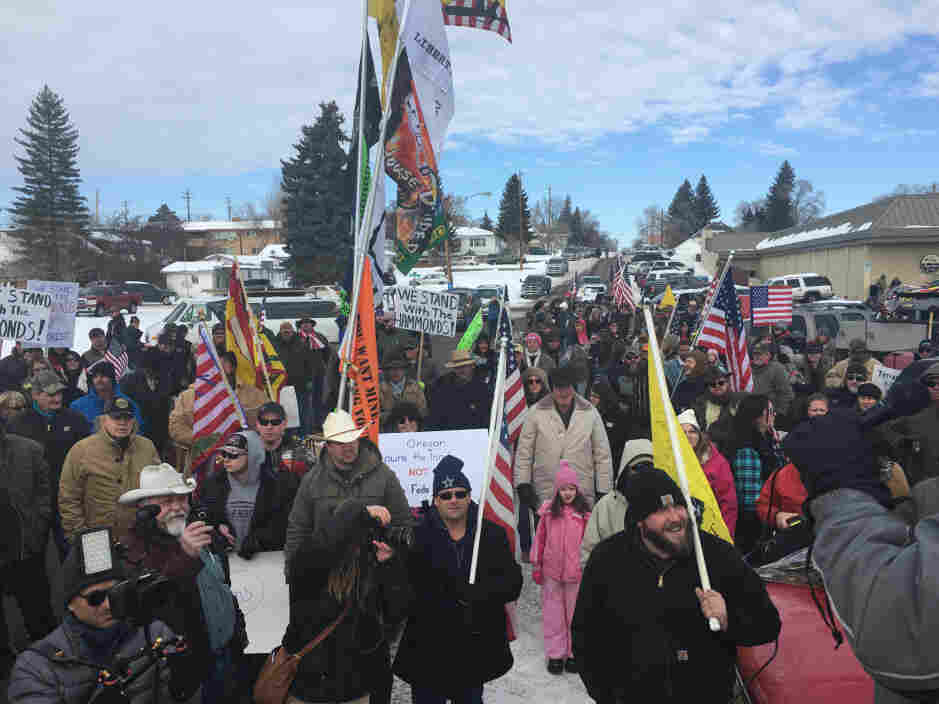 Protesters in Burns, Ore., march toward the home of Dwight Hammond Jr., a local rancher convicted of arson on federal land. The Jan. 2 protest was peaceful, but ended with a group of militiamen occupying the Malheur National Wildlife Refuge. Amelia Templeton/OPB hide caption 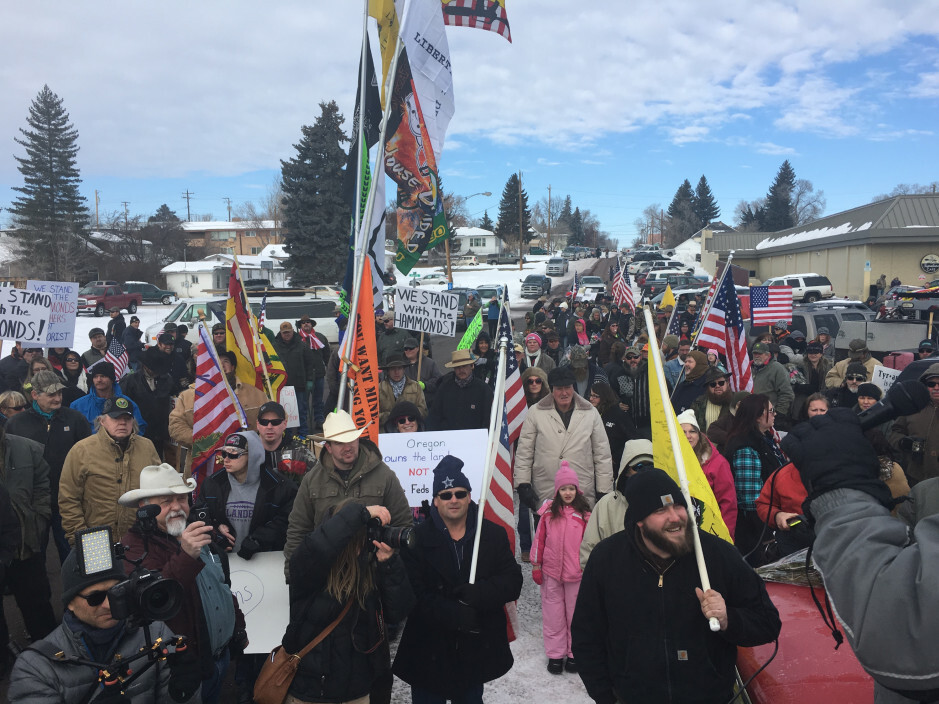 Protesters in Burns, Ore., march toward the home of Dwight Hammond Jr., a local rancher convicted of arson on federal land. The Jan. 2 protest was peaceful, but ended with a group of militiamen occupying the Malheur National Wildlife Refuge.

A self-styled militia in eastern Oregon grabbed national headlines Saturday when members broke into the headquarters of the Malheur National Wildlife Refuge. There the armed group remains Sunday, occupying the federal building in protest of what it sees as government overreach on rangelands throughout the western United States.

"We stand in defense," Ammon Bundy, the group's apparent leader and spokesperson, told Oregon Public Broadcasting. "And when the time is right we will begin to defend the people of Harney County, [Ore.,] in using the land and the resources."

Ammon's brother, Ryan, has reportedly used harsher rhetoric, saying members of the militia are willing to kill or be killed.

I talked to Ryan Bundy on the phone again. He said they're willing to kill and be killed if necessary. #OregonUnderAttack

Their last name may ring a bell. Ammon and Ryan Bundy are sons of rancher Cliven Bundy, who notably took part in an armed standoff with the federal Bureau of Land Management, or BLM, in Nevada in 2014.

Ammon Bundy now is part of a group of 15 to 150 people — depending on which source you believe — who are protesting the arson convictions of two Oregon ranchers, Dwight Hammond Jr. and his son, Steven.

But why exactly are a Nevada rancher's son and his supporters taking up the cause of two guys from Oregon? What is the source of the continued friction between many ranchers and the federal government? What does a 20-year-old terrorist attack in Oklahoma City have to do with all of it?

The situation began, in some ways, in the decades following the Civil War. The 1862 Homestead Act granted 160 acres of land to the people willing to settle it. Ranchers in some regions needed far more land than that to be profitable. They eventually began to pay grazing fees for the right to lease federal land — if they agreed to federal oversight.

"When you are using somebody else's land for your livelihood, that puts you in a very dependent relationship," Paul Starrs, a geography professor at the University of Nevada, Reno, told NPR's Ted Robbins in 2014. "And livestock ranchers are, in my experience, pretty savvy people. And they don't like that uncertainty. Nobody really likes uncertainty."

Some ranchers have strongly objected to the government's management of federal lands, especially over issues of water or environmental conservation, and to the terms of their leases. Cliven Bundy, for his part, grazed his cattle on federal lands and refused to pay grazing fees. The government still hasn't collected the more than $1 million he owes.

The tension is heightened by how much land the federal government continues to own in the Western states.

According to the Congressional Research Service, in Nevada the U.S. owned more than 81 percent of the land in the state in 2010. In Oregon, that number hovered right around half — 53 percent of the land, more than 30 million acres of which were administered by either the BLM or the U.S. Forest Service.

"The fact is, it's a paradox being a rugged individualist dependent on the government — unless you're John Wayne," Robbins says.

It's a paradox that Dwight and Steven Hammond chafed at for decades — and one that drew them off the ranch and into the courtroom.

The animus harbored by the two Hammond men for federal land agencies dates back decades. Both reportedly were arrested for obstructing federal officials in 1994 — in protest of which "nearly 500 incensed ranchers showed up at a rally in Burns," according to High Country News. But even before that, the Hammonds bristled at the authority of managers of the Malheur National Wildlife Refuge.

"[Dwight] Hammond allegedly made death threats against previous managers in 1986 and 1988 and against [Forrest] Cameron, the current manager, in 1991 and again this year," High Country News reported in 1994.

The seeds of the current situation were sown in 2001 and 2006. In both those years, the U.S. government said the Hammonds set fires that spread onto land managed by the BLM. The 2001 blaze burned 139 acres of public land, according to court documents; the 2006 fire — for which only Steven was convicted — burned an additional acre of public land.

Arson convictions for both father and son were handed down in 2012. Much of the dispute in the years afterward — including, eventually, this weekend's armed occupation — revolves around the sentencing.

Under the Antiterrorism and Effective Death Penalty Act of 1996, which increased the penalties for arson committed against federal property, the mandatory minimum punishment for such crimes was upped to five years in federal prison. The law, which was passed in the wake of the Oklahoma City bombing, struck the judge presiding over the sentencing as too harsh — and off-base in this instance.

"It just would not be — would not meet any idea I have of justice, proportionality," U.S. District Judge Michael R. Hogan said at the sentencing. "I am not supposed to use the word 'fairness' in criminal law. I know that I had a criminal law professor a long time ago yell at me for doing that. And I don't do that.

"But this — it would be a sentence which would shock the conscience to me."

At the time, Hogan sentenced Dwight Hammond Jr. to three months of prison, and Steven Hammond to a year and one day. The federal government wanted the full five years, appealing the shorter sentences and eventually winning that appeal in 2014.

"Even a fire in a remote area has the potential to spread to more populated areas, threaten local property and residents, or endanger the firefighters called to battle the blaze," District Judge Stephen J. Murphy wrote in the appellate court's opinion. "Given the seriousness of arson, a five-year sentence is not grossly disproportionate to the offense."

The original sentences were remanded, and the Hammonds were sentenced to five years in prison. The Hammonds are expected to report to prison Monday.

Whatever their continued friction with federal officials, the Hammonds have not publicly condoned the self-styled militia members who claim to be interceding on their behalf.

Militiamen Plan For What's Next As The Hammonds Head To Prison
Who Wants A Burns Standoff? Not The Sheriff, The Ranchers, Or Even Cliven Bundy
Militia Occupying Federal Land: 'We Are Not Hurting Anybody'

"The Hammonds' attorney has previously stated the militiamen showing up in Burns do not represent the ranchers," Oregon Public Broadcasting reports, noting that many locals in Burns have also received the out-of-towners warily — with several "Militia Go Home" fliers posted throughout the town.

Even Cliven Bundy, Ammon's father, expressed his hesitation over the protests. "I don't quite understand how much they're going to accomplish," Bundy told OPB. "I think of it this way: What business does the Bundy family have in Harney County, Oregon?"

Still, that has not dissuaded Ammon Bundy or the group with which he's holed up in the Malheur refuge headquarters. At a press conference there, Bundy said his plan may take "several months at the shortest to accomplish."

As of Sunday, law enforcement had not attempted to remove the armed group from the federal building, OPB reports.