Accessibility links
Militants In Oregon Say They'll Leave If Local Community Asks : The Two-Way The anti-federalist occupiers have held part of a federal wildlife refuge since Saturday. They say they speak for two men convicted of arson on federal lands who returned to jail Monday. 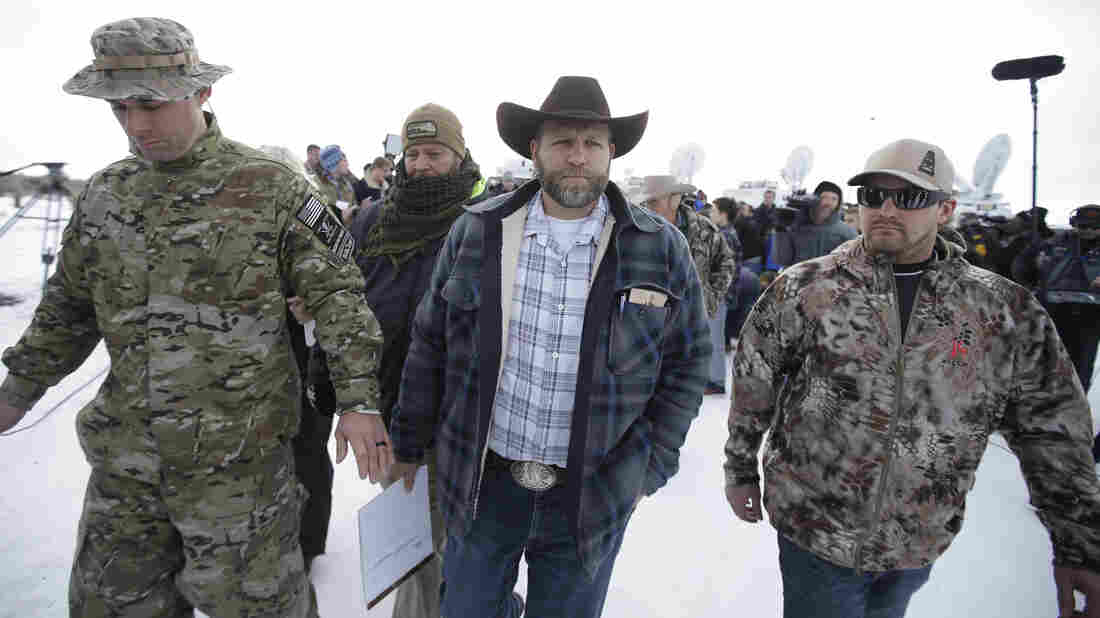 Ammon Bundy [center] is one of the occupiers at the Malheur National Wildlife Refuge headquarters near Burns, Ore. Rick Bowmer/AP hide caption 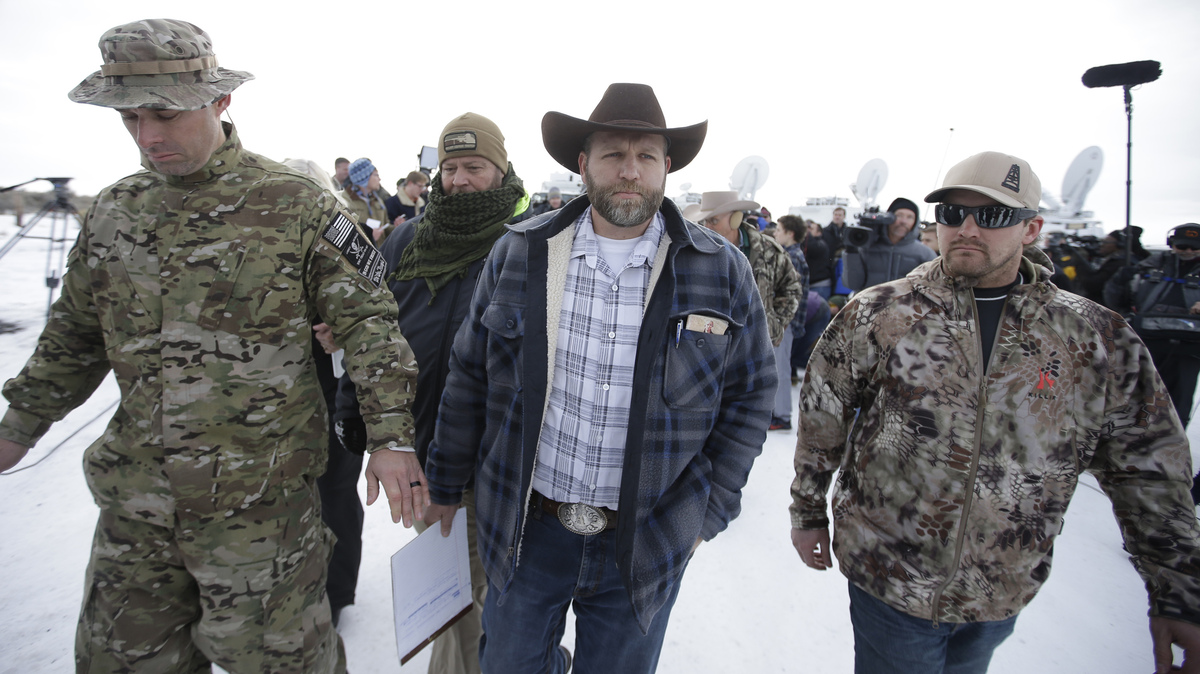 Ammon Bundy [center] is one of the occupiers at the Malheur National Wildlife Refuge headquarters near Burns, Ore.

Anti-federalist militants continue to hold the Malheur National Wildlife Refuge near Burns, Ore., as law enforcement officials keep their distance. But they say they're willing to leave if local residents ask them to, Oregon Public Broadcasting reports.

For three days, this heavily armed group has occupied the federal building to support Dwight and Steven Hammond, who had been convicted of arson on federal lands and served short terms. Those sentences were extended by a judge who said they were too brief.

The county sheriff says the Hammonds have turned themselves in to serve the extended sentences.

A lawyer for the Hammonds was quoted on Monday as saying the ranchers will ask President Obama for clemency.

Late Monday, the apparent leader of the armed occupiers, Ryan Bundy, told OPB reporters that the group — which has branded itself Citizens for Constitutional Freedom — would respect the wishes of the local community.

"This is their county – we can't be here and force this on them," Bundy told OPB Monday. "If they don't want to retrieve their rights, and if the county people tell us to leave, we'll leave."

Bundy tells OPB that he hopes to have a community meeting organized within the next day.

Ryan's brother, Ammon Bundy, accused multiple federal agencies of pursuing the Hammond family because they have refused to sell their ranch. The Hammonds "have multiple times refused the purchase of it, and because of that, have been prosecuted for actions that ranchers have done for over 100 years in this country, and this valley." NPR has not independently verified Bundy's version of the events.

This is their only demand, he says: "All we have been asking from the very beginning is that they put together an evidential hearing board to look at the evidences, look at the accusations that are set forth, and to look at the abuses the Hammonds have been experiencing."

Harney County Sheriff David Ward accuses the armed men of having larger goals. "These men came to Harney County claiming to be part of militia groups supporting local ranchers, when in reality these men had alternative motives to attempt to overthrow the county and federal government in hopes to spark a movement across the United States," OPB reported.

The Two-Way has gone into depth about the history of tension between the federal government and ranchers in the West.

It's important to note that the Hammond family has not said it is linked to the armed occupation claiming to support it. Susan Hammond, who is married to Dwight, told OPB that "I don't really know the purpose of the guys who are out there. ... I kind of understand where they come from, as far as their priorities in life."

NPR's Martin Kaste, who is at the scene, told our Newscast unit that it's not clear how many people are occupying these buildings. Here's more from Martin:

"People are calling this a standoff, but it isn't, at least not at the moment. Really what we're talking about here is maybe a handful, maybe more — men mainly, as far as I can tell — who have taken up residence at this National Wildlife Refuge, in some of the buildings here. There's no law enforcement visible. In town, about 30 minutes away, there is an increased law enforcement presence.

"They say just to kind of show the fact that they're around. But there certainly [aren't] blockades, there isn't any kind of a confrontation, at least nothing like that yet."