Accessibility links
Decades Later, Victims Of Chicago Police Torture Paid Reparations : The Two-Way Fifty-seven people received payments totaling $5.5 million. "Reparations is not a necessity. But it is a moral compunction and a moral reckoning to right a wrong," said Mayor Rahm Emanuel. 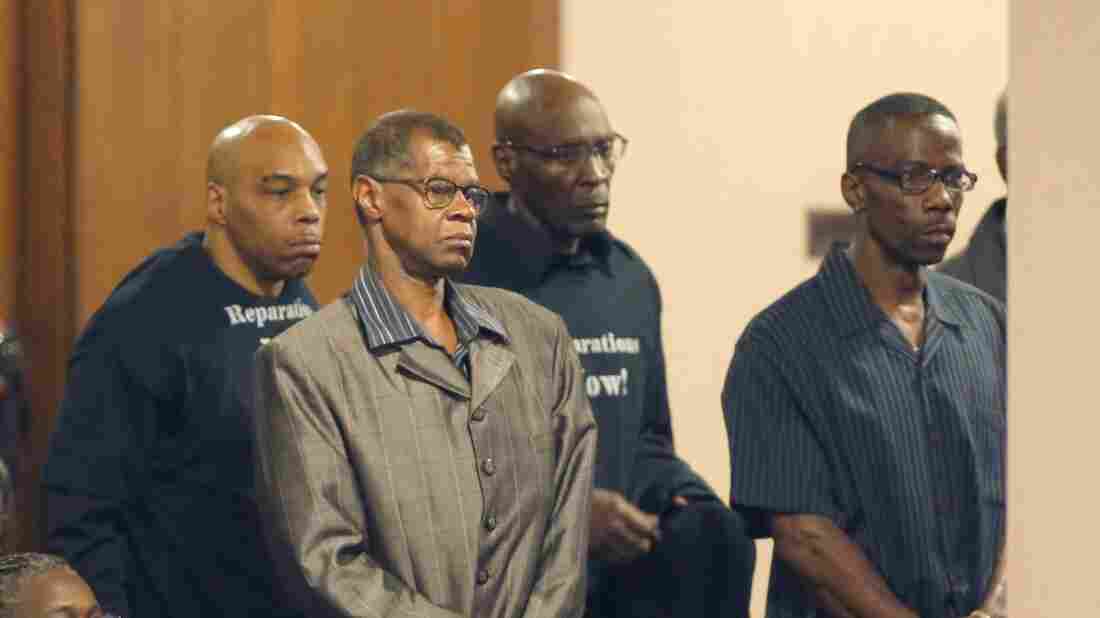 Men identified as victims of police torture under the command of retired Chicago Police Commander Jon Burge stand to be recognized by the Chicago City Council in May. Charles Rex Arbogast/AP hide caption 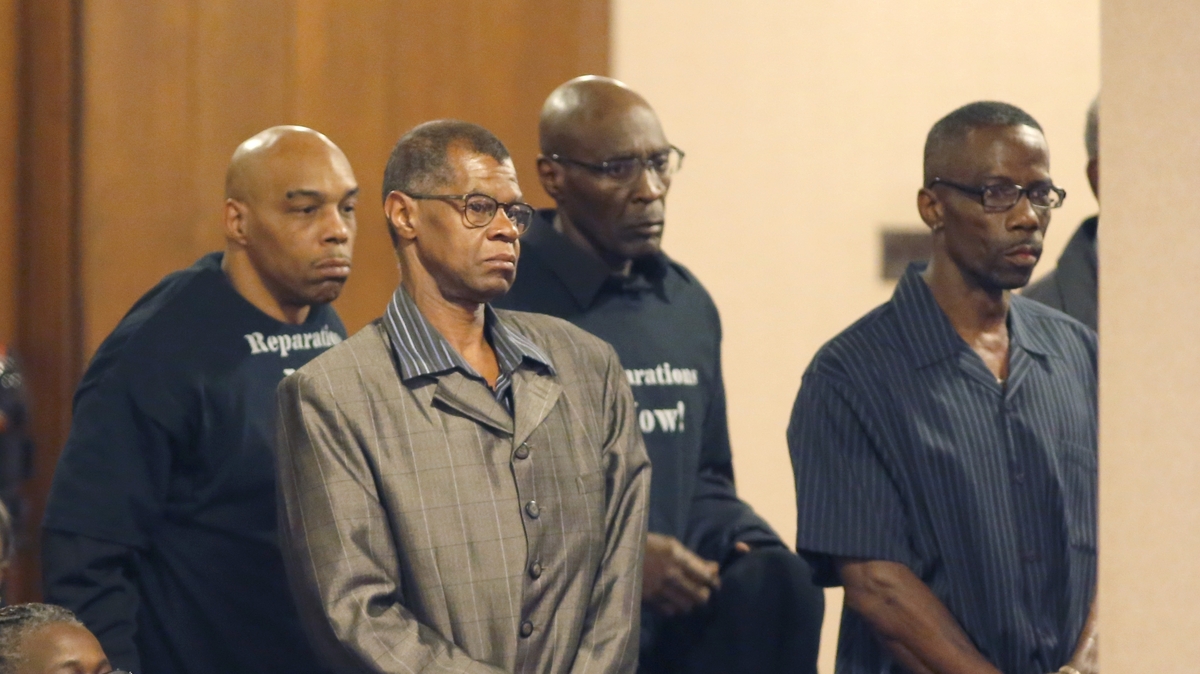 Men identified as victims of police torture under the command of retired Chicago Police Commander Jon Burge stand to be recognized by the Chicago City Council in May.

Decades after they were tortured by Chicago police, 57 people have now received reparations totaling $5.5 million from the city of Chicago.

Sean Kennedy of member station WBEZ tells our Newscast unit that the city hopes the settlements can help mend relations between police and the community, especially in light of several recent high-profile shootings of young black men. Sean reports that:

"The money was paid Monday to 57 victims of a police unit commanded by former officer Jon Burge. He led the Area 2 detectives from the 1970s through the early '90s.

"Over decades, allegations surfaced that Burge and officers under his command had shocked, suffocated and beaten suspects into giving false confessions."

Chicago's embattled mayor, Rahm Emanuel, supported the reparations package in April. Shortly after, it was approved by the City Council.

"Reparations is not a necessity. But it is a moral compunction and a moral reckoning to right a wrong. There is no statute of limitations on that," Emanuel told the Chicago Sun-Times after the city paid the reparations.

"In three years, we settled up legally, reparations and a verbal apology what hasn't been done in three decades," Emanuel told the newspaper. "It does indicate that I [am] willing to be accountable and willing to be held responsible for the city and have the determination, the desire and the diligence to get it done."

Emanuel has come under pressure since the November release of police dashcam video showing an officer shooting a black teenager, Laquan McDonald, 16 times. Protesters have since demanded the mayor's resignation. Thousands of emails released last week showed close communication between Emanuel's office, the police and the organization that investigates the police in the aftermath of deadly force incidents. And Chicago's police force is currently facing a Justice Department civil rights investigation.

As Sean notes, it will be "difficult for the decades-old reparations to outweigh" McDonald's death and other recent high-profile police killings.

The claims process for Burge's victims took months, The Associated Press says, adding that "the $5.5 million adds to more than $100 million that has been paid in court-ordered judgments, settlements of lawsuits and legal fees — most of it spent by the financially strapped city of Chicago and some by Cook County — over the years related to the torture scandal."

One plaintiff's attorney, Flint Taylor, tells the Sun-Times that larger changes are needed:

"Reparations, although an historic accomplishment that recognizes that racist violence by the police is not a recent phenomenon, but rather spans many decades, cannot heal the city without fundamental, systemic changes within the Chicago Police Department, the Cook County state's attorney's office and the Cook County criminal justice system."