Accessibility links
'El Chapo' Back In Prison He Escaped From — Thanks, In Part, To Lure Of Hollywood : The Two-Way Mexican authorities say the drug kingpin wanted to film a biopic about his life and reached out to producers — which helped officials track him down. He's been returned to the site of his July escape. 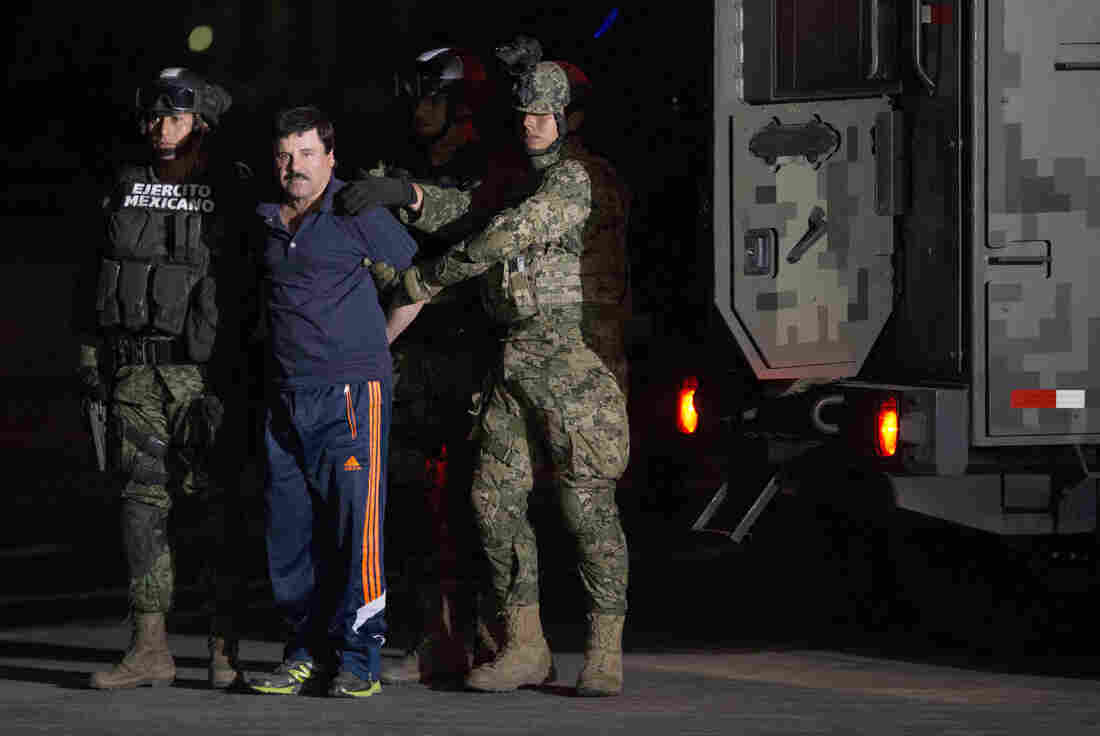 Mexican drug lord Joaquin "El Chapo" Guzman is escorted by army soldiers to a waiting helicopter, at a federal hangar in Mexico City Friday. The world's most wanted drug lord was recaptured six months after he fled through a tunnel from a maximum security prison in a made-for-Hollywood escape that deeply embarrassed the government and strained ties with the United States. Rebecca Blackwell/AP hide caption 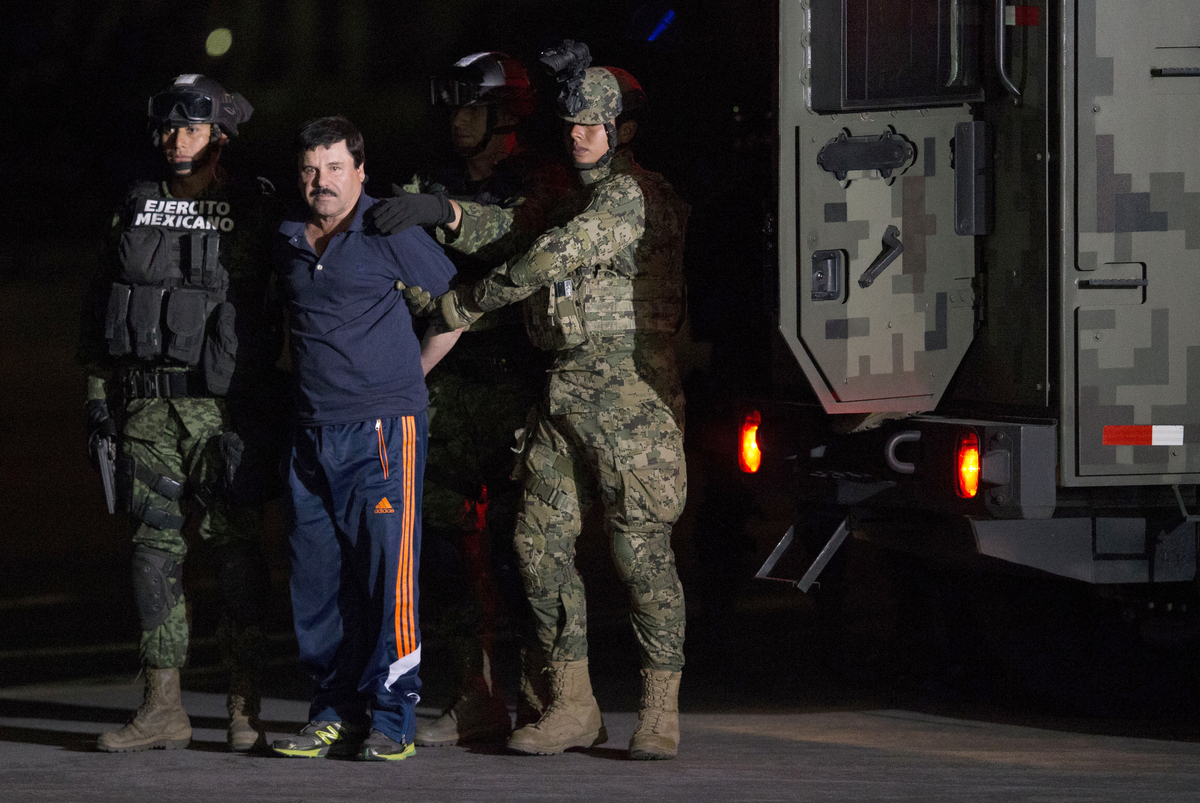 Mexican drug lord Joaquin "El Chapo" Guzman is escorted by army soldiers to a waiting helicopter, at a federal hangar in Mexico City Friday. The world's most wanted drug lord was recaptured six months after he fled through a tunnel from a maximum security prison in a made-for-Hollywood escape that deeply embarrassed the government and strained ties with the United States.

Joaquin "El Chapo" Guzmán had seen his name in headlines. He knew it graced the world's Most Wanted lists.

But it appears that the notorious drug kingpin wanted something more: He wanted his name in lights.

Guzmán was recaptured by the Mexican government on Friday, and has been returned to the same prison he broke out of in July. Mexican authorities tracked him down in the seaside city of Los Mochis thanks in part to Guzmán's desire to make a biopic about his life, Mexico's attorney general says.

The druglord had contacted actors and producers, Arely Gomez says, opening a line of investigation that helped Mexican marines ultimately capture the fugitive.

Guzman's life is certainly dramatic enough for the big screen. In fact, a film based on his story -- Chapo: El Escape del Siglo, or Chapo: The Escape of the Century — is set to open in Mexico next week.

And a less glamorous video of his July escape has already seized the attention of the world, as Bill and Laura reported yesterday:

"Surveillance video shot by a security camera in Guzmán's cell showed one of the world's most notorious criminals pacing around before dropping behind a partition in the shower area of his cell.

"That cell was in the Altiplano prison, a maximum security facility about 55 miles from Mexico City. Guzmán spent less than 18 months there before his accomplices used a nearly 1-mile tunnel to ferry him to freedom.

"Before he was captured in February of 2014, Guzmán had been on the lam since 2001 — when he escaped from another maximum security prison that was reportedly nearly identical to the one he broke out of last year."

After his 2001 escape, the head of the Sinaloa Cartel "managed to outmaneuver, outfight or out-bribe his rivals to stay at the top of the business for over a decade," as Reuters put it.

This time around, he had months, not years, of freedom. Mexican forces first located Guzmán in October, but he escaped in part because Mexican marines held their fire at the sight of two women and a child with him, Mexican attorney general Arely Gomez said Friday.

Officials then tracked Guzmán to Los Mochis, with help from his silver-screen dreams and information from one of his tunnel builders, the Associated Press reports. They narrowed his location down to one house in an upscale neighborhood, and moved in early Friday, the wire service says:

"Five suspects were killed and six others arrested. One marine was injured.

" 'You could hear intense gunfire and a helicopter; it was fierce,' said a neighbor, adding that the battle raged for three hours, starting at 4 a.m. She refused to be quoted by name in fear for her own safety.

"Gomez said Guzman and his security chief, 'El Cholo' Ivan Gastelum, were able to flee via storm drains and escape through a manhole cover to the street, where they commandeered getaway cars. Marines climbed into the drains in pursuit. They closed in on the two men based on reports of stolen vehicles and they were arrested on the highway."

Now Guzmán is back at the Altiplano maximum-security prison — the site of his July escape.

The U.S. has a standing request for Guzmán to be transferred to the States, where he faces drug trafficking charges. Many are calling for that extradition to happen, and quickly.

On Friday, Mexican authorities said nothing about extraditing the escape artist to America.