Accessibility links
Aid Set To Arrive In Besieged Syrian Towns Soon; Airstrike Hits Rebel-Held Town : The Two-Way Aid convoys are expected to arrive Monday. Meanwhile, an airstrike in Idlib has killed dozens, and Syria has announced it's willing to join peace talks with the opposition — with conditions. 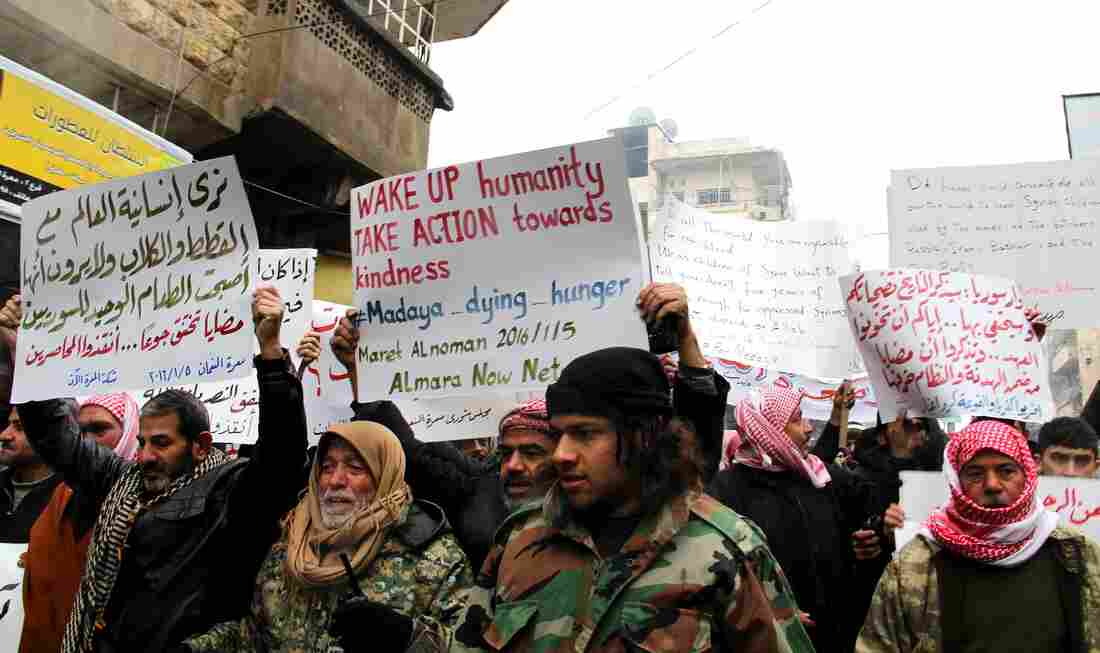 On Jan. 5, demonstrators in Maaret al-Numan, in the Idlib province of Syria, hold banners during a protest for civilians who starved to death in Madaya. Aid is expected to reach Madaya Monday. On Saturday, Maaret al-Numan, the city shown here, was hit by an airstrike that killed up to 60 people, according to the Syrian Observatory for Human Rights. Anadolu Agency/Getty Images hide caption 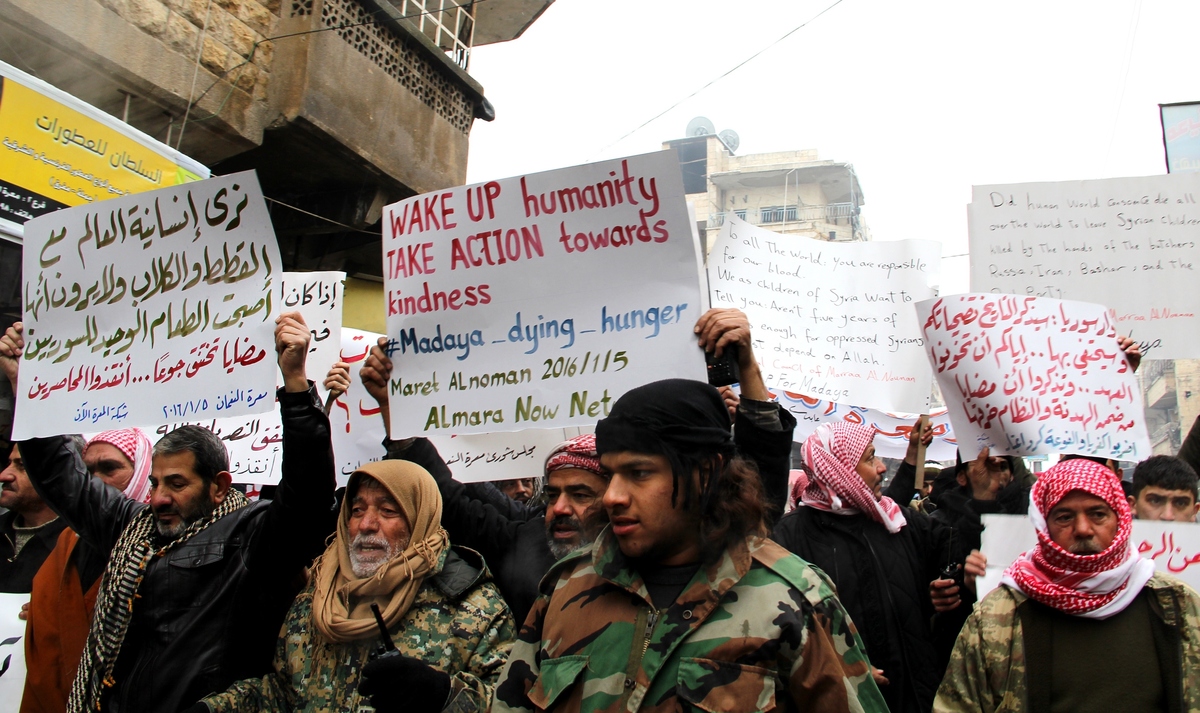 On Jan. 5, demonstrators in Maaret al-Numan, in the Idlib province of Syria, hold banners during a protest for civilians who starved to death in Madaya. Aid is expected to reach Madaya Monday. On Saturday, Maaret al-Numan, the city shown here, was hit by an airstrike that killed up to 60 people, according to the Syrian Observatory for Human Rights.

Aid is due to arrive in the besieged towns of Madaya, Foa and Kefraya soon — possibly on Monday.

Meanwhile, an airstrike in the Idlib province has killed scores of people, and Syria's government says it will be willing to join peace talks in Geneva with some opposition groups.

The food aid branch of the UN has confirmed to NPR's Alice Fordham that aid is expected to reach the besieged towns in the next few days. The BBC reports that the convoy to Madaya had been delayed — the reason wasn't specified, but the news agency notes the difficulty of negotiating access across battlefronts.

"Madaya is a mostly opposition area surrounded by the allies of president Bashar al Assad. Foa and Kefraya are pro-Assad enclaves in a rebel area," Alice explains. "Both sides are using siege tactics, but harrowing reports from Madaya, described as credible by the UN, suggest the hunger is more severe there."

No food aid had reached Madaya, near the border with Lebanon, since October. Accounts from inside the town described people eating grass, leaves and pets to survive. Doctors Without Borders reports nearly two dozen people have died since early December at a clinic supported by the nonprofit.

The Syrian regime announced Thursday it would allow humanitarian assistance to the three towns; convoys are set to arrive in all three locations Monday, the BBC says.

Meanwhile, an airstrike on a rebel-held town in in northern Syria killed as many as 60 people, including both rebels and civilians, according to the Syrian Observatory for Human Rights.

The rebels were from the Nusra Front, an al-Qaeda-affiliated group that is fighting against the regime, the Islamic State and some U.S.-backed rebel groups, The Associated Press reports. The airstrike targeted a court and a jail.

"It's not clear whether Syrian war planes or those of their Russian allies carried out the attack," Alice says.

Amid the violence, the Syrian government announced it would be willing to join peace talks with opposition groups later this month, in Geneva.

But Syria's foreign minister, Walid al-Moallem, said the government wants to review lists of the opposition groups at the table, to "ensure that 'terrorist' groups will not be represented," the AP reports.

The wire service offers some background:

"The U.N. is urging the two sides to meet Jan. 25 in an effort to end the conflict, which has killed more than 250,000 people and caused a massive refugee crisis.

"Conferences in Geneva in 2014 failed to bring about a settlement, though this round is seen as particularly urgent after the U.N. Security Council passed a resolution last month endorsing a transitional plan for Syria.

"The Syrian opposition is demanding some gestures by the government ahead of the talks including lifting sieges imposed on rebel-held areas, releasing some detainees and ending airstrikes."