Accessibility links
'We Didn't Lie,' Volkswagen CEO Says Of Emissions Scandal : The Two-Way Speaking with NPR, Matthias Mueller blamed the problem on a misunderstanding of U.S. law and said the company doesn't have an ethics problem. Less than a day later, he asked to clarify those remarks. 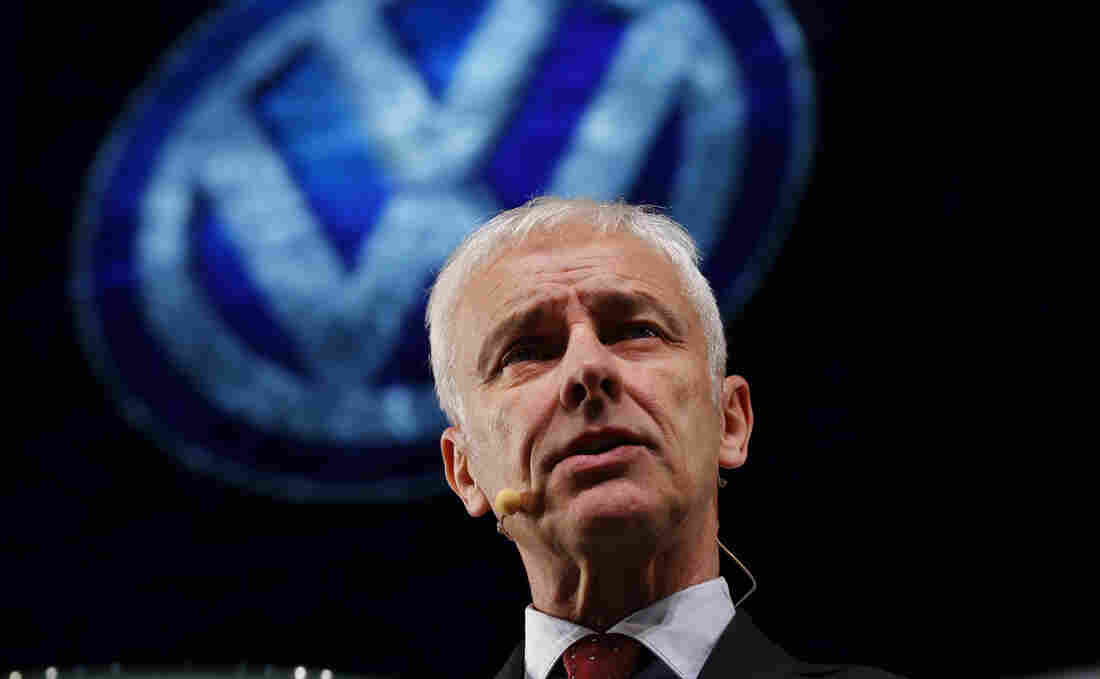 Volkswagen CEO Matthias Mueller speaks to the media Sunday in Detroit, apologizing for the scandal that has plunged the German auto giant into crisis. Paul Sancya/AP hide caption 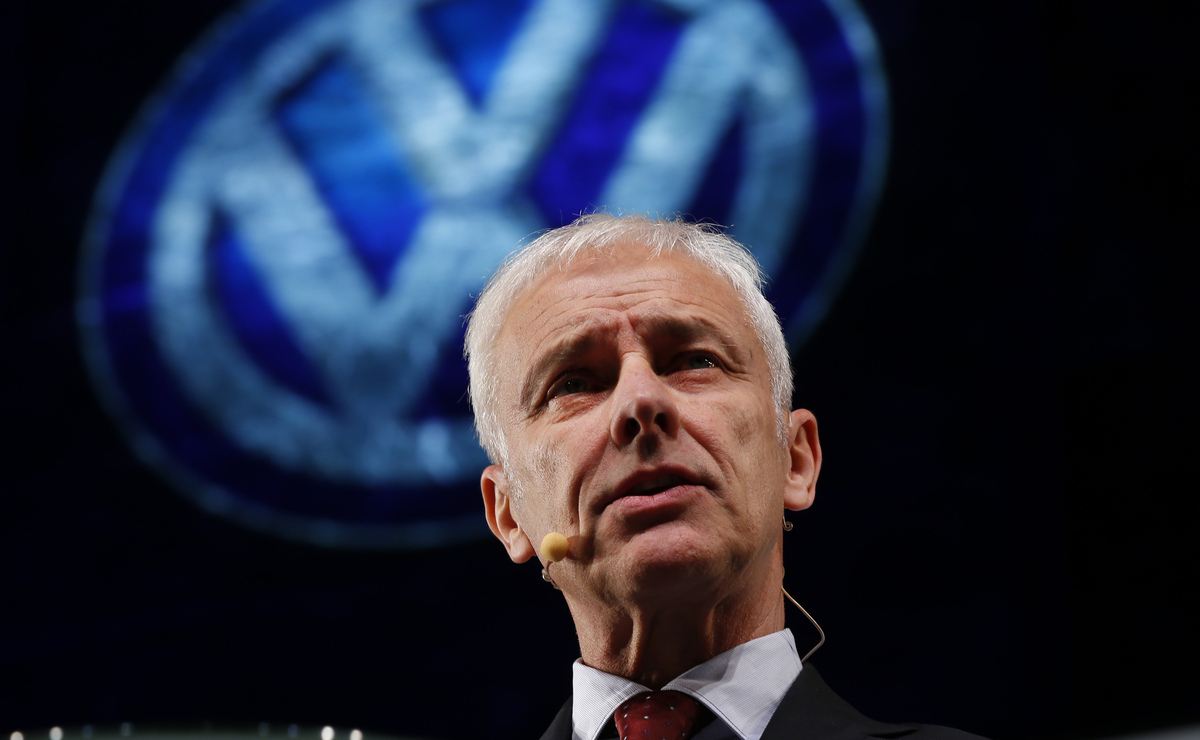 Volkswagen CEO Matthias Mueller speaks to the media Sunday in Detroit, apologizing for the scandal that has plunged the German auto giant into crisis.

The North American International Auto Show is a place where car industry gathers to celebrate — and in recent years to apologize. At this year's show in Detroit, it was Volkswagen CEO Matthias Mueller's turn to face the media.

In a prepared statement, Mueller said of the emissions-cheat scandal, "We all know that we have let down customers, authorities, regulators and the general public here in America, too." He added, "We are — I am — truly sorry for that. And I would like to apologize once again for what went wrong with Volkswagen."

Following his remarks, Mueller spoke briefly with NPR. He said Volkswagen did not lie to U.S. regulators about emissions problems with its diesel engines but chalked it up to a misunderstanding of U.S. law.

Matthias Mueller: Frankly spoken, it was a technical problem. We made a default, we had a ... not the right interpretation of the American law. And we had some targets for our technical engineers, and they solved this problem and reached targets with some software solutions which haven't been compatible to the American law. That is the thing. And the other question you mentioned — it was an ethical problem? I cannot understand why you say that.

NPR: Because Volkswagen, in the U.S., intentionally lied to EPA regulators when they asked them about the problem before it came to light.

Mueller: We didn't lie. We didn't understand the question first. And then we worked since 2014 to solve the problem. And we did it together and it was a default of VW that it needed such a long time.

NPR: And how do you fix the perception that's here in the U.S. — how do you change American thinking about Volkswagen ...

Mueller: We don't want to change the American thinking. We have to make up our mind and we have to change our thinking. And we just do that.

Mueller: I'm CEO in three months, and I'm working day and night to make a change process within Volkswagen. We started this, and it needs some time. It needs, let me say, one year ... one to three years.

For example, we have installed new board member for integrity and — Ms. [Christine] Hohmann-Dennhardt, she came from Daimler with a lot of another solutions within our company.

NPR: There were a lot of people in Congress and the [Obama] administration who are very angry with Volkswagen. What do you say to those people who are investigating and who feel like personally that the company lied to them?

Mueller: First of all, I have to apologize on behalf of Volkswagen. Second, I have to promise — and we will do the pledge — that we deliver appropriate solutions for our customers. As soon as possible.

NPR: How soon is soon?

Mueller: We have to discuss it with the EPA on Wednesday, and then we will see whether the time schedule is OK or not.

On Wednesday, Mueller is expected to present the Environmental Protection Agency with Volkswagen's plan to fix the emissions problem.

After a portion of this interview with Mueller aired Monday on Morning Edition, Volkswagen approached NPR, asking for a do-over of sorts, another conversation with the CEO.

So we spoke with Mueller again. Here's a portion of the follow-up conversation.

Mueller: I have to apologize for yesterday evening because the situation was a little bit difficult for me to handle in front of all these colleagues of yours and everybody shouting. OK. Thank you very much for coming again and giving me the opportunity to say some words.

Mueller: Yeah, the situation is, first of all we fully accept the violation. There is no doubt about it. Second, we have to apologize on behalf of Volkswagen for that situation we have created in front of customers, in front of dealers and, of course, to the authorities. ...

NPR: People feel lied to, they feel like they've been had and all those things. There seems to be a difficulty in fixing that problem. How do you fix that problem? ...

Mueller: We have to accept that the problem was not created three months ago. It was created, let me say, 10 years ago. ... We had the wrong reaction when we got information year by year from the EPA and from the [California Air Resources Board]. ... We have to apologize for that, and we'll do our utmost to do things right for the future. ...

Mueller: We're doing our utmost. We have worked night and day to find solutions. Not only technical solutions. It's a lot of work for the lawyers and also for the press department.