Accessibility links
Last Known Survivor Of 1906 San Francisco Earthquake Has Died : The Two-Way William Del Monte was 3 months old when the deadly earthquake struck. At 109, he was "a piece of living San Francisco history." 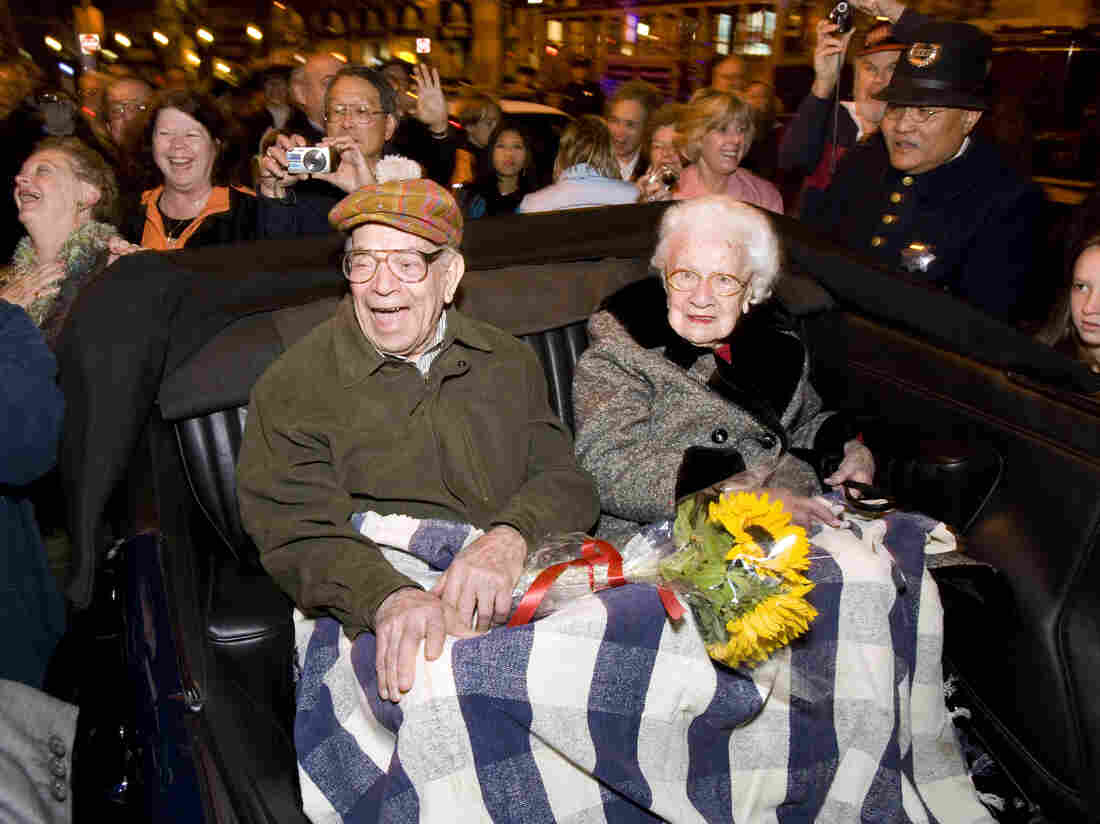 In this 2009 photo, survivors William Del Monte and Rose Cliver are honored at a ceremony for the earthquake's anniversary. Laura Morton/AP hide caption 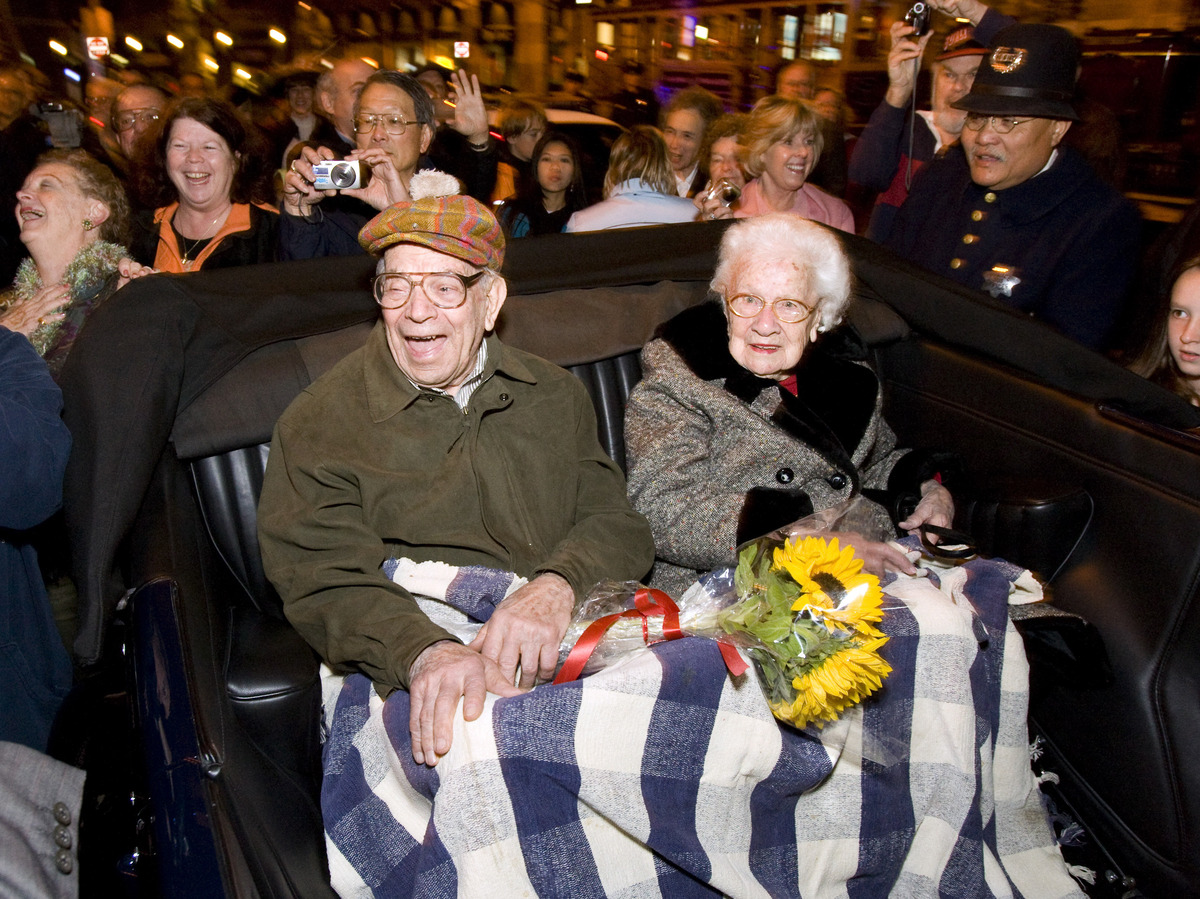 In this 2009 photo, survivors William Del Monte and Rose Cliver are honored at a ceremony for the earthquake's anniversary.

When the Great Earthquake hit San Francisco in 1906, 3-month-old William Del Monte's family fled the city on a horse-drawn cart.

Del Monte was the last known survivor of the 7.8-magnitude quake and fires that killed some 3,000 people and leveled much of the city. He died of natural causes Monday at a retirement home north of San Francisco. He was 109.

Del Monte didn't remember much about his family's dramatic escape, but "was told that his mother bundled him up after the shaking stopped and ran out to the street where his father commandeered the rig, which they rode down to the waterfront as flames licked at them from all sides," The San Francisco Chronicle reports.

"We have not only lost a friend, but also a piece of living San Francisco history in his death, just 11 days before his 110th birthday," San Francisco Mayor Edwin W. Lee said in a statement. 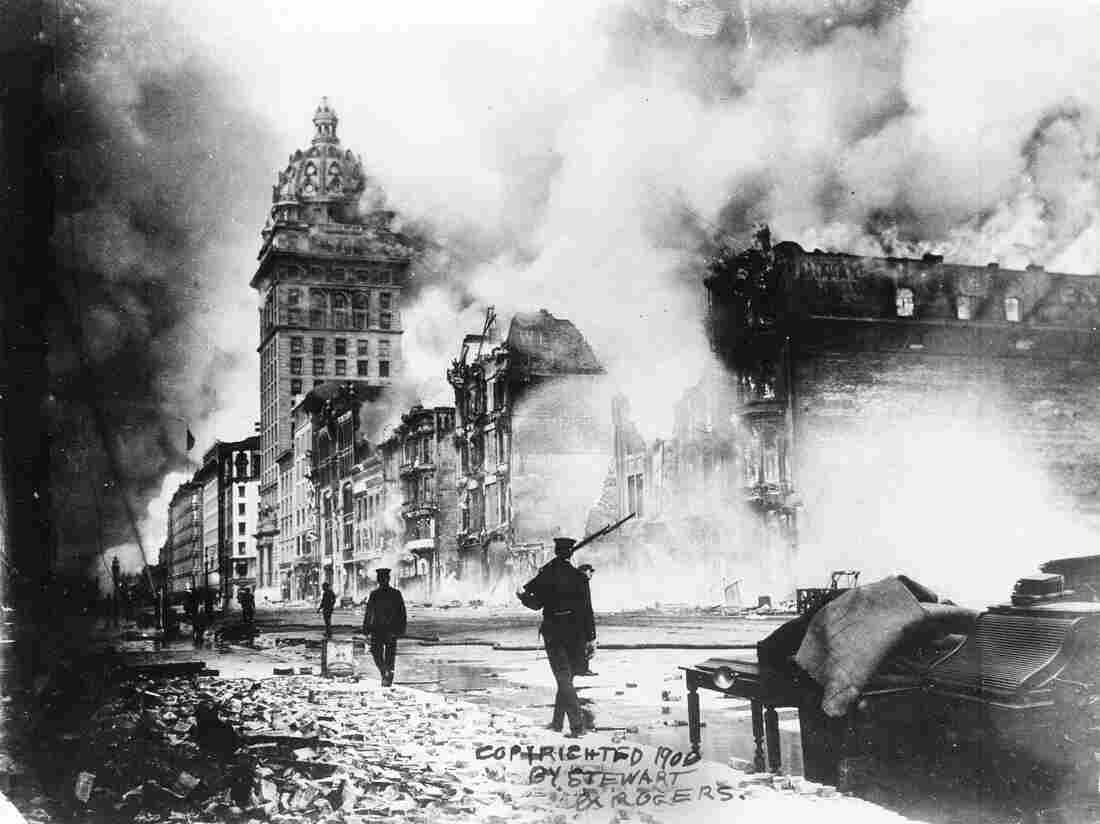 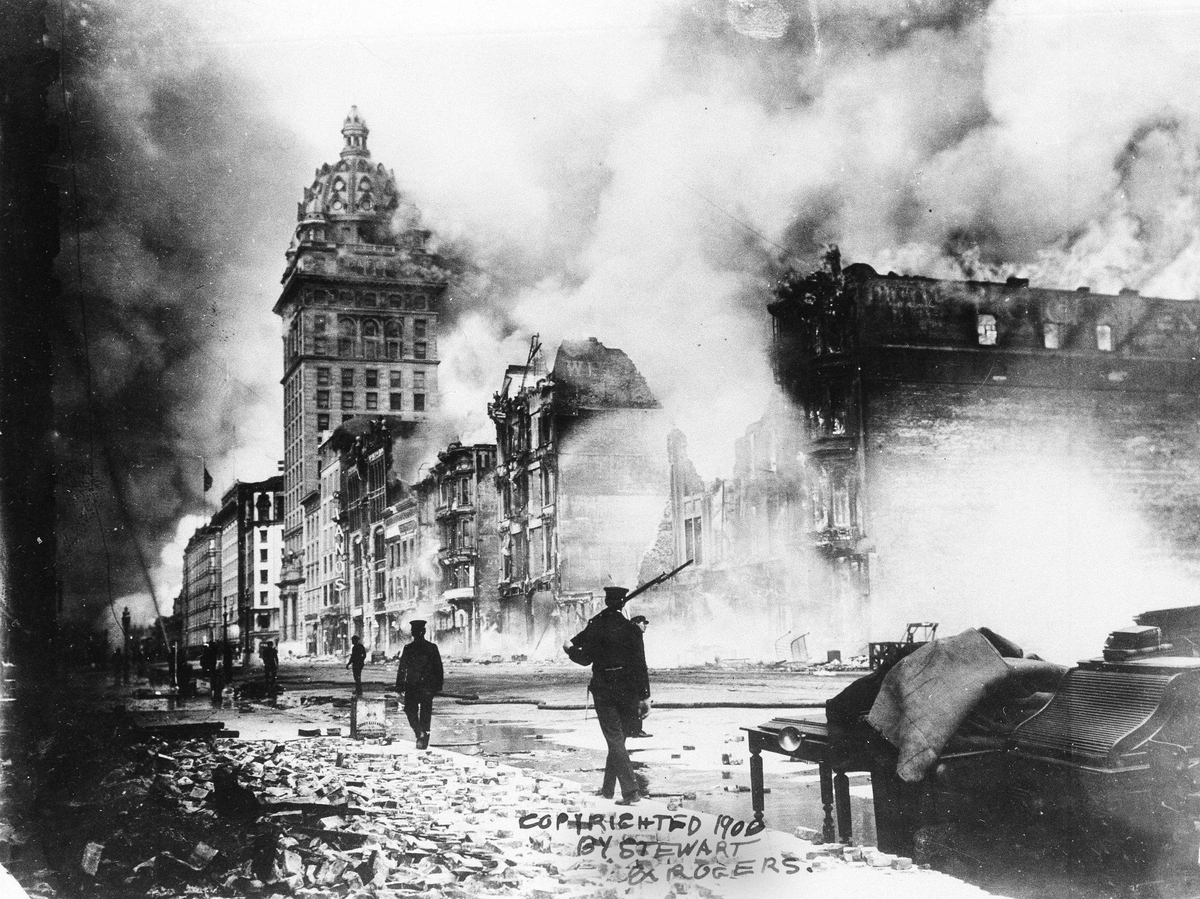 Fires rage out of control in San Francisco following the massive earthquake on April 18, 1906.

"After being forced out of his home in North Beach after the 1906 Great Earthquake and Fire as an infant, he ultimately witnessed our City's rise from the ashes more than a century ago seeing it rebuilt better than ever," Lee says.

Del Monte's nephew Ray Barroca told the Chronicle that his uncle had a great sense of humor and "just embraced the changes in technology that he saw in his life from gas lamps and horses and buggies all the way through the development of electricity and jet travel to computers."

The newspaper adds that Del Monte worked as a stock market trader "almost until the day he died."

After the earthquake struck on April 18, 1906, fires erupted and "raged for almost four days, burning more than 28,000 structures and leveling more than three-quarters of the city," NPR reported for the quake centennial. 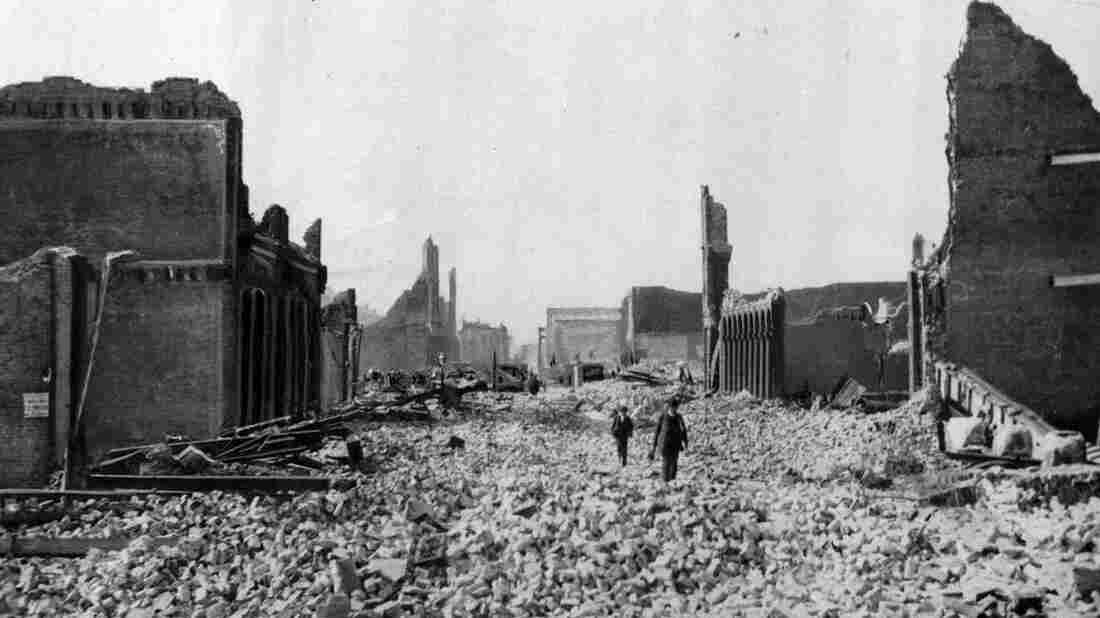 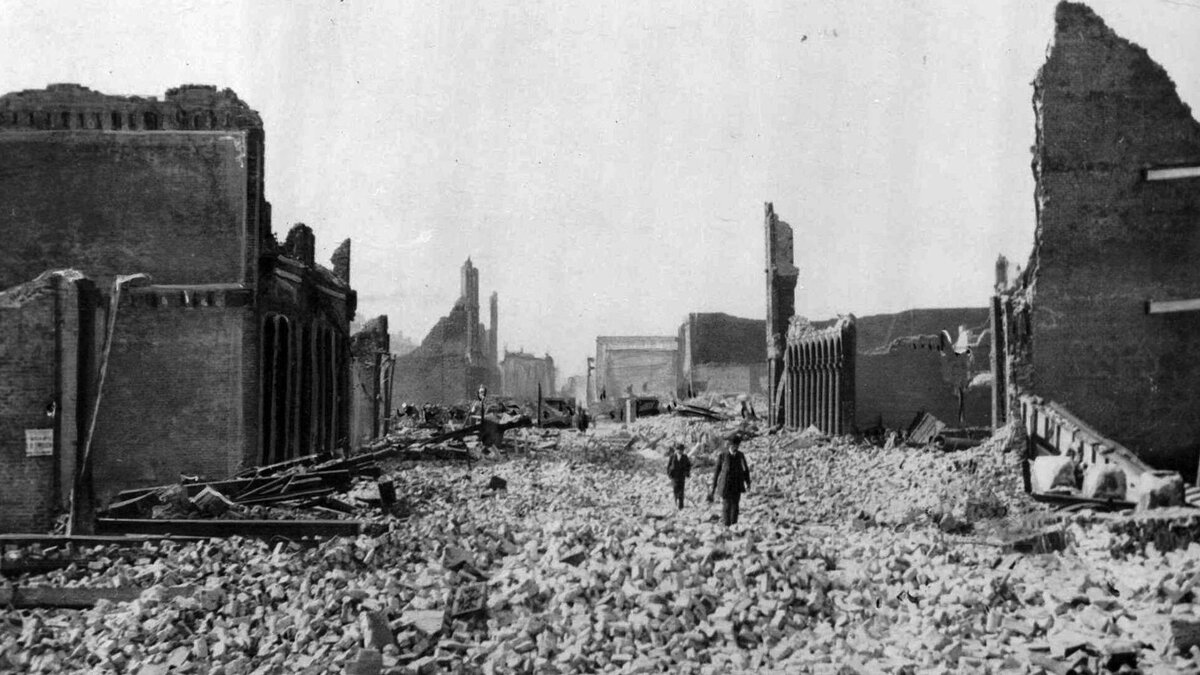 People walk through the rubble following the earthquake in San Francisco.

"Big buildings were crumbling as one might crush a biscuit in one's hand" is how an eyewitness named P. Barrett described the quake.

Survivor Rose Barreda described the scene in a letter to a friend at the time, as featured on Morning Edition in 2006:

"Many burned-out people passed our house with bundles and ropes around their necks, dragging heavy trunks. From the moment they heard that fatal, heart-rending sound of the trumpet announcing their house would be burned or dynamited, they had to move on or be shot. As the sun set, the black cloud we watched all day became glaringly red, and indeed it was not the reflection of our far-famed Golden Gate sunset."

Del Monte was actively involved in annual earthquake commemoration events. This year, San Francisco's mayor says the city will dedicate the event to him.

"It is important, even when your last survivor goes, because, in the end, it is San Francisco that's surviving," organizer Lee Houskeeper told the Chronicle.