Accessibility links
Record-Busting Star Explosion Baffles Sky Watchers : The Two-Way It's 200 times more powerful than a typical supernova and 570 billion times brighter than our sun. First spotted in June, this stellar monster is wowing astronomers, who wonder what's at its heart. 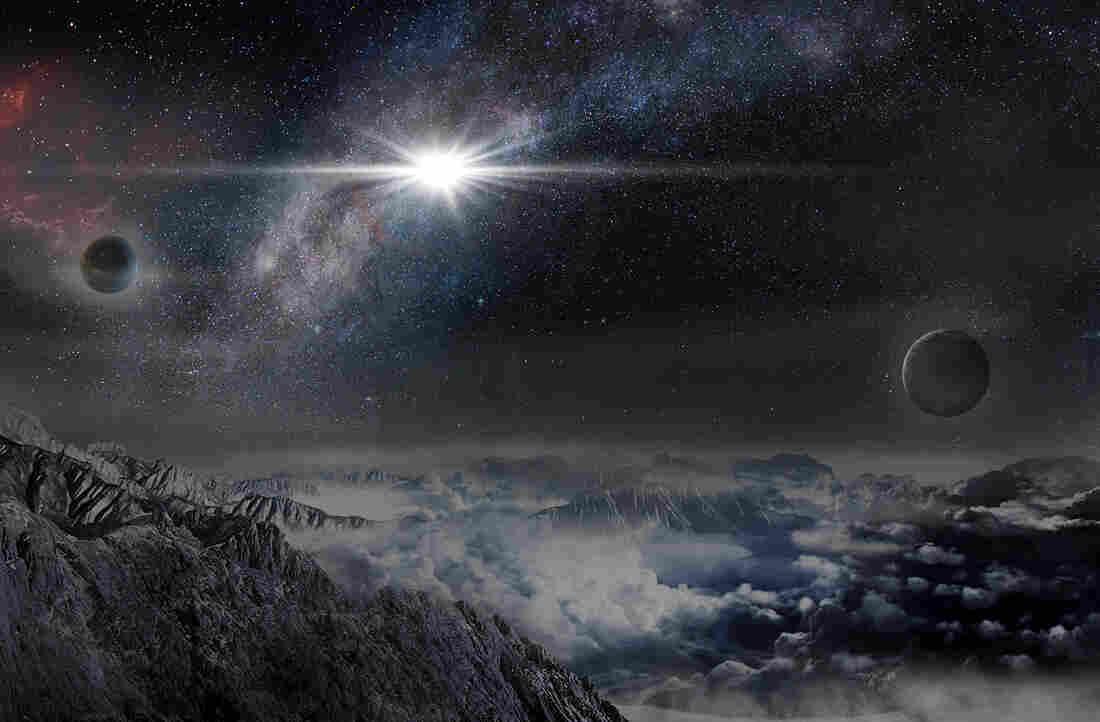 An artist's impression of the superluminous supernova as it would appear from a planet in the same galaxy, about 10,000 light-years away. The exploding star is 570 billion times brighter than our sun. Jin Ma/Beijing Planetarium/Science hide caption 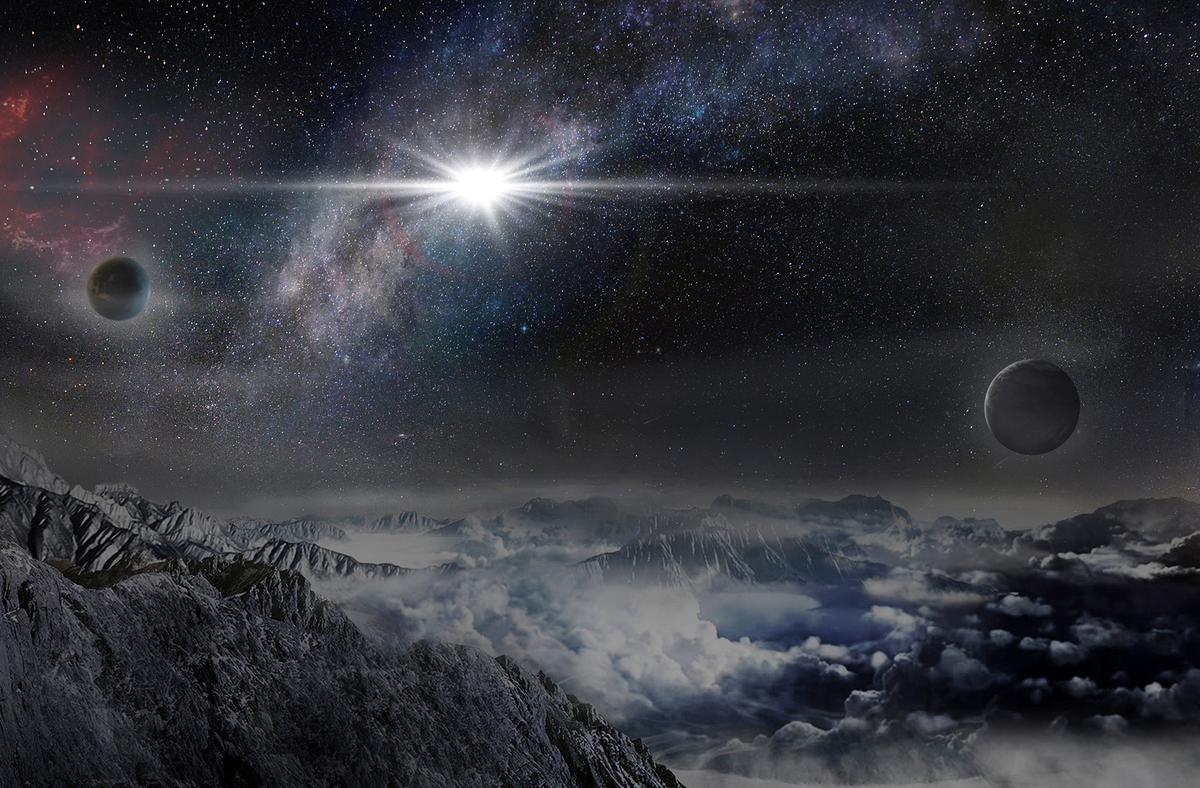 An artist's impression of the superluminous supernova as it would appear from a planet in the same galaxy, about 10,000 light-years away. The exploding star is 570 billion times brighter than our sun.

A mind-boggling stellar explosion is baffling astronomers, who say this cosmic beast is so immensely powerful that no one's sure exactly what made it go boom.

The recently discovered inferno is about 200 times more powerful than a typical exploding star, or supernova, and 570 billion times brighter than our sun. It was first spotted in June by the All-Sky Automated Survey for Supernovae, nicknamed the "Assassin" project, so it's called ASASSN-15lh.

Astronomers describe their finding in a study published Thursday in the journal Science.

Even though it's the brightest supernova on record — if indeed it is a supernova — it can't be seen with the naked eye from Earth, since it is 3.8 billion light-years away.

Even telescopes don't help much. "It looks like a little smudge," says Subo Dong, an astronomer at the Kavli Institute for Astronomy and Astrophysics at Peking University. "This is because it's so far away. It doesn't look so spectacular." 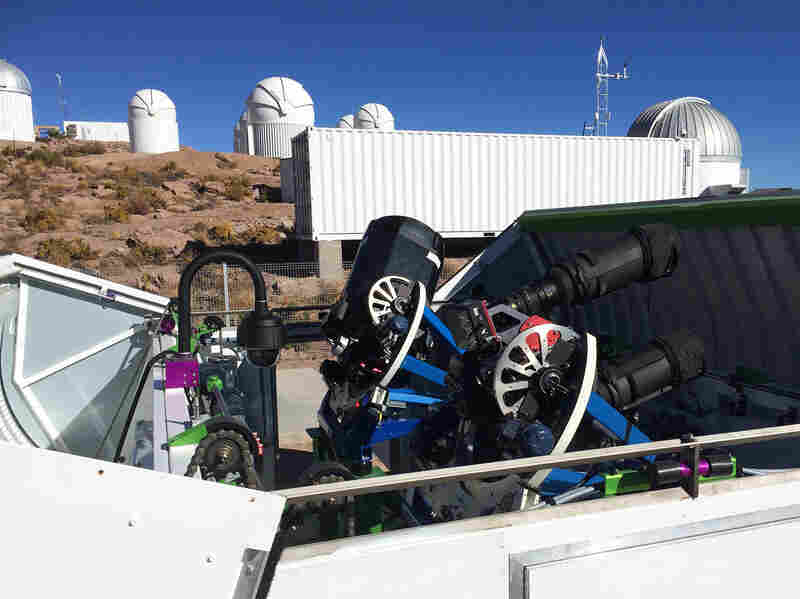 Two of the telescopes in use for the All-Sky Automated Survey for Supernovae in Cerro Tololo, Chile, that discovered the supernova. Since this photo was taken, two more telescopes have been added at the station. Wayne Rosing/Science hide caption 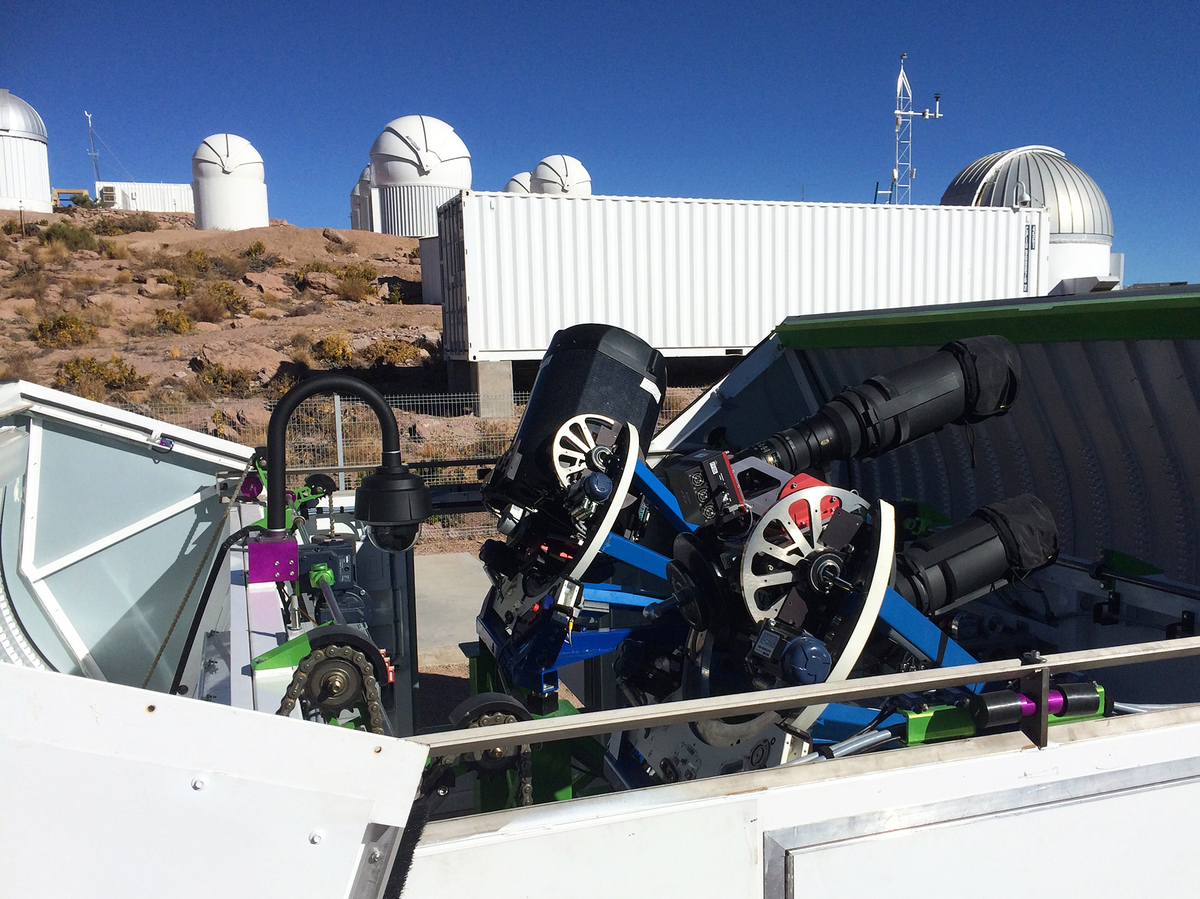 Two of the telescopes in use for the All-Sky Automated Survey for Supernovae in Cerro Tololo, Chile, that discovered the supernova. Since this photo was taken, two more telescopes have been added at the station.

And if you could get into a spaceship and fly closer, you wouldn't want to, says astronomer Ben Shappee, at the Carnegie Observatories. That's because this monster puts out a lot of ultraviolet radiation, so if you actually got close enough to get a good look, "you would be dead right away," he points out.

Initially, the scientists didn't realize just how bright this beast was.

"We knew it was probably a supernova, but we didn't know at that time how interesting or how important it is," Dong recalls.

But soon, more observations from a different telescope made him realize "it was the most luminous supernova yet discovered." Dong says he was so excited when he got the news by email one night at 2 a.m., he couldn't go back to sleep at all.

Supernovas have captured the imaginations of sky watchers since ancient times. The first one was observed nearly 2,000 years ago. What's more, you wouldn't be here without them, because almost everything in your life is made up of the remnants of these violent stellar deaths.

"If you look around here on Earth, anything that's not hydrogen or helium was actually made inside of a star," explains Shappee. "It actually has to go through a supernova explosion to be distributed across the galaxy."

This new one is more than twice as bright as the previous record holder. What's powering it?

Astronomers will continue to watch it in the coming months with all kinds of telescopes, including the Hubble Space Telescope. Shappee says he is not sad that this explosion has already peaked and will slowly fade.

"We get more and more information — you see basically deeper and deeper into the supernova the longer you observe it," he says. "How it changes with time can give us additional information."

Edo Berger, an astronomer at Harvard University, says this find is exciting because "it's often, I think, the most extreme events that teach us the most about the range of possibilities that the universe comes up with, especially when it comes to exploding objects."

Most supernovas are the result of some sort of exploding star, says Berger. Superluminous supernovas are at least 10 times brighter than more garden-variety ones, and they're rare. Scientists know only of about 30 of these more powerful explosions, and while they have theories about what drives them, ASASSN-15lh is so extreme that current models can't explain it.

"The event itself seems to be coming from the center of the galaxy," says Berger. "And so I think that raises the possibility that it could be related to the supermassive black hole that resides in the center of a galaxy like that. And perhaps it is due to a very different mechanism than the explosion of a star." Perhaps a star got too close to the black hole, which is now ripping it to shreds.

"It's a story that continues to evolve. It will be interesting to see where we are a year from now," says Berger. "We might have a completely different version or story of what we think this object is."

Still, while this explosion is awesome, Berger says it's not the biggest bang astronomers have seen. Gamma ray bursts, for example, are much more energetic and luminous.

"In the world of supernova explosions, if this is what this object really is, then it is currently the record holder," says Berger. "But relative to a gamma ray burst, in fact, this explosion is actually kind of puny."