Accessibility links
Implementation Day Arrives: Sanctions On Iran Are Lifted : The Two-Way The International Atomic Energy Agency has announced that Iran has shrunk its nuclear program enough to have sanctions lifted. From banking to pistachios, here's a look at what will happen next. 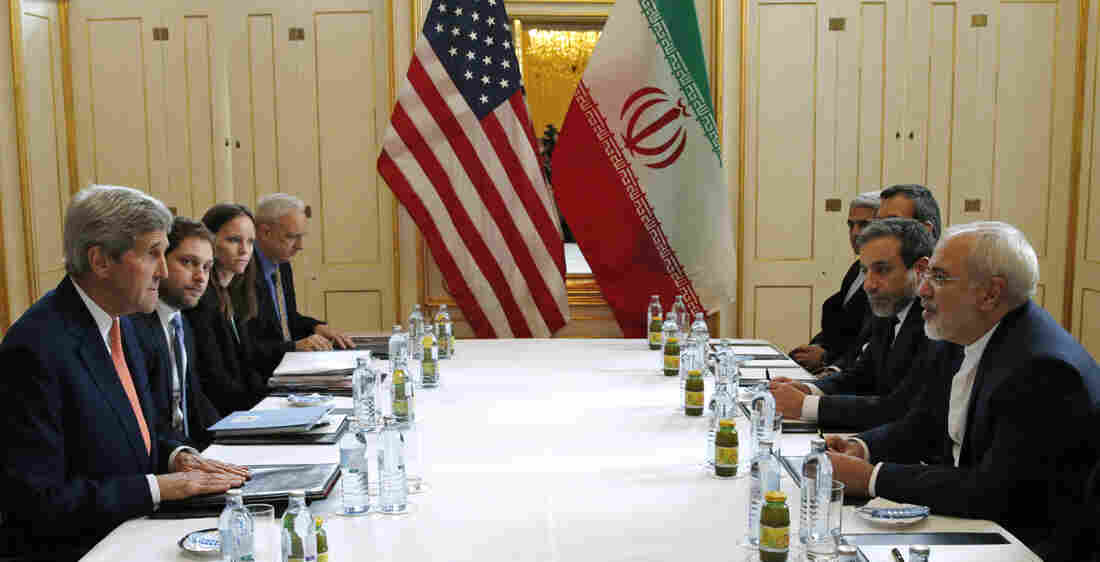 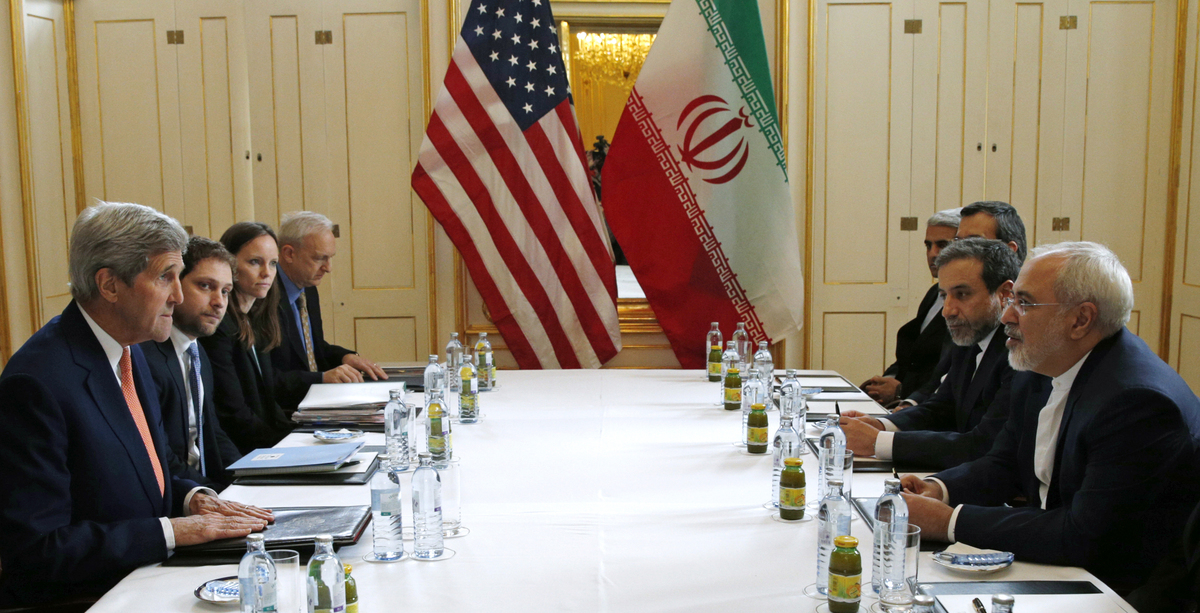 U.S. Secretary of State John Kerry (left) meets with Iranian Foreign Minister Mohammad Javad Zarif (right) in Vienna on Saturday. The International Atomic Energy Agency, or IAEA, has verified that Iran has met all conditions under the nuclear deal.

Today marks a major milestone in the Iran nuclear deal.

It's known as Implementation Day, the day when the International Atomic Energy Agency, or IAEA, says that Iran has curbed its nuclear program enough to begin receiving relief on sanctions. The terms were laid out last July by Iran, the U.S. and five other world powers.

"Today marks the moment that the Iran nuclear agreement transitions from an ambitious set of promises on paper to measurable action in progress," U.S Secretary of State John Kerry announced Saturday in Vienna.

His statement comes directly on the heels of confirmation from IAEA Director-General Yukiya Amano, who said that Iran has completed the necessary steps to begin implementation of the agreement.

"This paves the way for the IAEA to begin verifying and monitoring Iran's nuclear-related commitments under the agreement, as requested by the U.N. Security Council and authorised by the IAEA Board," Amano said in the statement.

In order to get to this stage, Iran first had to fulfill a number of steps to shrink its nuclear program and render it more transparent to outsiders. Under the agreement, Iran was required to reduce its stockpile of enriched uranium by about 98 percent, remove two-thirds of its centrifuges — leaving a total of 5,060 centrifuges — and remove the core of its heavy water reactor at Arak.

Now, Iran is set to receive billions of dollars when its assets are unfrozen. Estimates range from $55 billion to over $100 billion.

Perhaps more significantly, the country "will effectively rejoin the international banking system. In short, Iran will be more of a player in the region and beyond in 2016," NPR's Peter Kenyon reports.

The lifting of sanctions will also impact the world oil market and Iran's trading partners, according to the World Bank. "Iran's full return to the global market will eventually add about a million barrels of oil a day, lowering oil prices by US$10 per barrel next year," the World Bank says, "which also expects economic growth to surge to about 5% in 2016 from 3% this year."

It's important to know that the U.S. is only lifting a portion of its sanctions on Iran. "U.S. statutory sanctions focused on Iran's support for terrorism, human rights abuses, and missile activities will remain in effect and continue to be enforced," The White House says.

And the U.S. will open up far less than the European Union in terms of trade and business with Iran.

There's a lot of uncertainty within the business community about what exactly will be allowed. NPR's Michele Kelemen reported last month that "the U.S. Treasury Department is issuing detailed guidance to explain to Americans what is possible and what remains off-limits."

Broadly, the Treasury Department says the U.S. will allow "the sale of U.S. origin aircraft, parts and services exclusively for commercial passenger aviation to Iran; the import of Iranian-origin carpets and foodstuff; and certain activities conducted by foreign subsidiaries of U.S. companies."

These are the exceptions. The U.S. Treasury says that "the U.S. embargo will generally remain in place, even after Implementation Day, because of concerns outside of Iran's nuclear program."

Another thorny issue: how this will work for multinational corporations. CNN Money takes Apple as an example:

"It can apply to Treasury for a waiver to ship iPads to Iran from the U.S., but its U.S. business can't service the device or open a store in Iran. Apple could also face penalties if the iPad landed in the wrong hands.

"However, a European subsidiary of Apple could operate in Iran after Implementation Day. It just couldn't talk to Apple HQ in California about the Iranian operations."

As CNN Money reports, "It will still be almost impossible for most U.S. businesses to set up a physical presence in Iran or partner with Iranian companies."

While there are still many outstanding questions about how sanctions relief will play out, here's a look at what happens in a number of sectors under the terms of the nuclear deal:

The U.S. says that it will no longer sanction non-U.S. individuals who engage in financial transactions with the Iranian government, its central bank or financial institutions. That will make it much easier for Iran to reconnect with international banking systems.

Money will be able to move between the European Union and Iran without special authorization or notification. The E.U. will allow Iranian banks to open offices in E.U. member states.

The E.U. will allow member states to import and sell Iranian crude oil and gas.

By contrast, the U.S. will cease efforts to reduce Iran's crude oil sales and will no longer sanction non-U.S. citizens who are part of or engage in transactions with Iran's energy sector.

"Most companies I speak with in the United States are shocked to learn that they will continue to be prohibited from doing business with Iran while their counterparts in Europe and Asia are currently sending business envoys to Tehran," sanctions lawyer Kaveh Miremadi tells Platts, an energy information service.

Another sanctions lawyer, Anthony Patten, told Platts, "Even if you're a non-US company that in principle can do business in Iran, structuring your deal in a way that complies with US export restrictions is still challenging."

Should you be a fan of Iranian pistachios, caviar, or carpets, you're in luck — the deal lifts import bans on these signature Iranian products to the U.S.

However, U.S. pistachio growers will be less lucky. As one nut expert told Slate, "If they allow Iranian pistachios into the country it may take a real bite out of the domestic market as they are far superior."

The E.U. will allow for trade to Iran of naval equipment and technology for ship building. It'll also allow cargo flights from Iran to access member state airports.

The U.S. won't sanction non-U.S. citizens who are part of the shipping sector in Iran or have financial dealings with it.

This is the only sector in which the U.S. is truly able to do business in the Iranian market. U.S. companies will now be allowed to sell commercial aircraft and parts to Iran.

As The Economist reported, "Iranian airlines were forced into the black market when sourcing, and repairing, their planes" for decades. After the deal, "as well as improving the lot of Iranian passengers, this could earn tens of billions of dollars for Western aircraft manufacturers, including American firms such as Boeing."

The U.S. will unblock the assets of dozens of Iranian individuals and entities who are currently flagged by the Treasury.

The E.U. is going to release all funds that have been frozen for numerous individuals and companies, including to the Central Bank of Iran, and is cancelling their visa bans.

And what happens if Iran violates the terms of the nuclear agreement? NPR's Michele Kelemen explains that:

"If U.S. officials believe Iran is violating the deal, they would bring the allegation to the Security Council. At that point, sanctions would be imposed automatically — the first unusual twist in the deal. If members of the Security Council — Russia, China or others — rise to Iran's defense, they can block the new sanctions only by passing a new resolution.

"That could be stopped by a U.S. veto. The U.S. is one of five permanent council members — including Great Britain, France, Russia and China — with veto power."