Accessibility links
Who Are The Prisoners The U.S. And Iran Are Exchanging? : The Two-Way Four men in Iranian custody and seven working their way through the U.S. legal system will be released or pardoned today as part of a prisoner swap. Here's what we know about them.

Who Are The Prisoners The U.S. And Iran Are Exchanging?

Who Are The Prisoners The U.S. And Iran Are Exchanging? 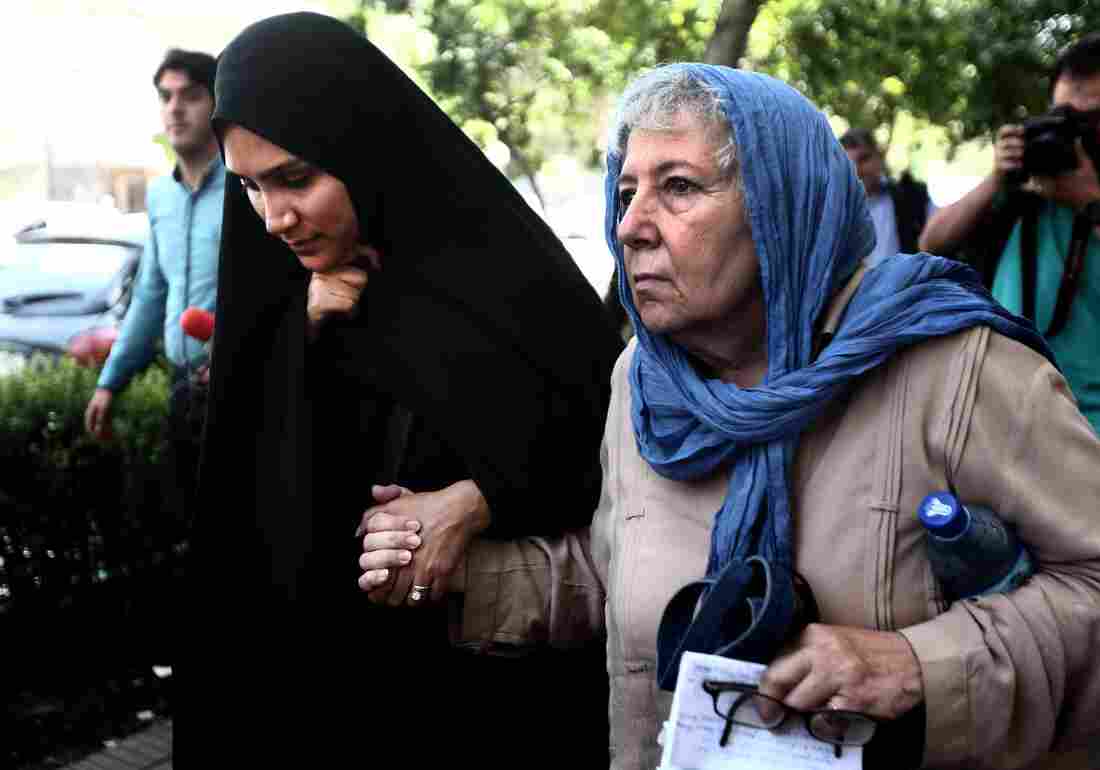 Mary Rezaian (right), the mother of detained Washington Post correspondent Jason Rezaian and his wife, Yeganeh Salehi (left), leave the Revolutionary Court after a hearing on Aug. 10, 2015, in Tehran. Rezaian is set to be released Saturday, as part of a prisoner exchange between Iran and the U.S. Behrouz Mehri/AFP/Getty Images hide caption 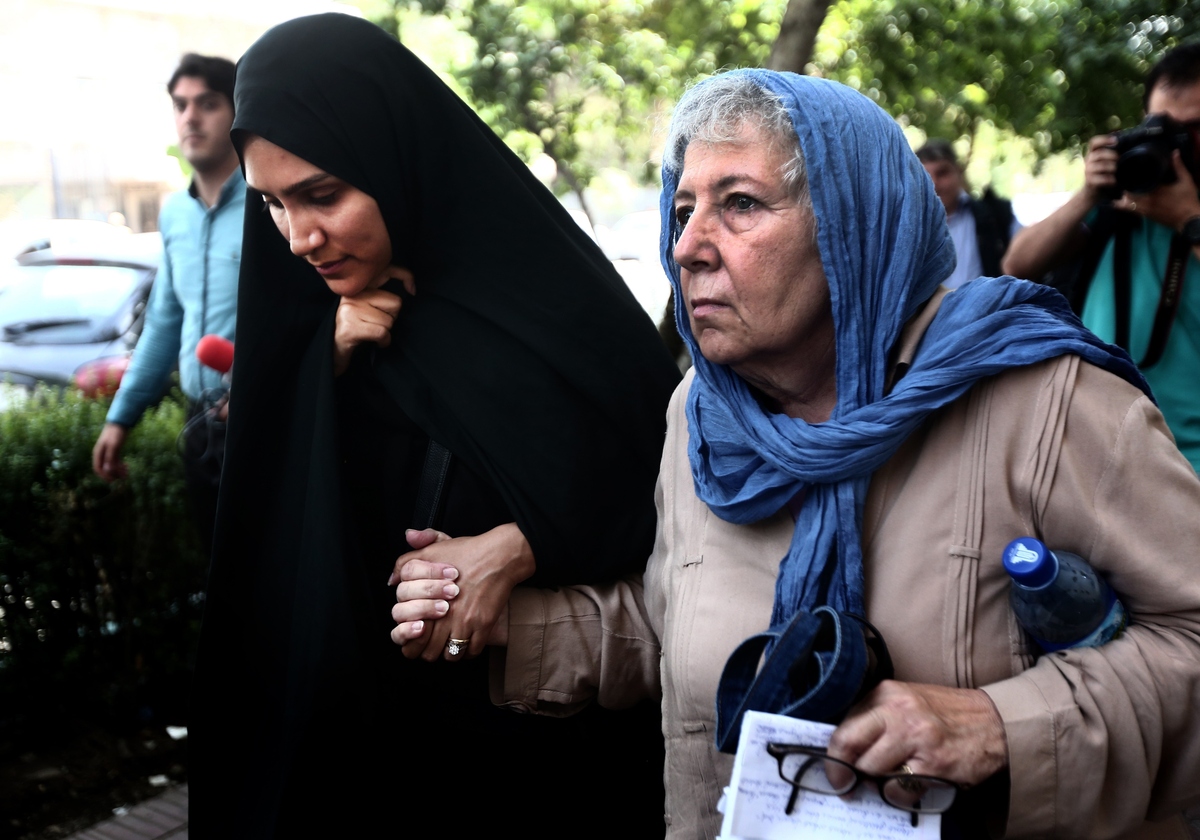 Mary Rezaian (right), the mother of detained Washington Post correspondent Jason Rezaian and his wife, Yeganeh Salehi (left), leave the Revolutionary Court after a hearing on Aug. 10, 2015, in Tehran. Rezaian is set to be released Saturday, as part of a prisoner exchange between Iran and the U.S.

The news comes as Iran is poised to celebrate "Implementation Day," marking the fulfillment of its obligations under the international nuclear pact, and the lifting of sanctions against the country.

The prisoner list includes some long-demanded releases — and a few surprises.

Washington Post journalist Jason Rezaian is a native of California. In Iran, he was the Post's Tehran bureau chief. (If you aren't familiar with his work as a journalist, you might recognize him from his appearance on the Iranian episode of Anthony Bourdain's Parts Unknown.) 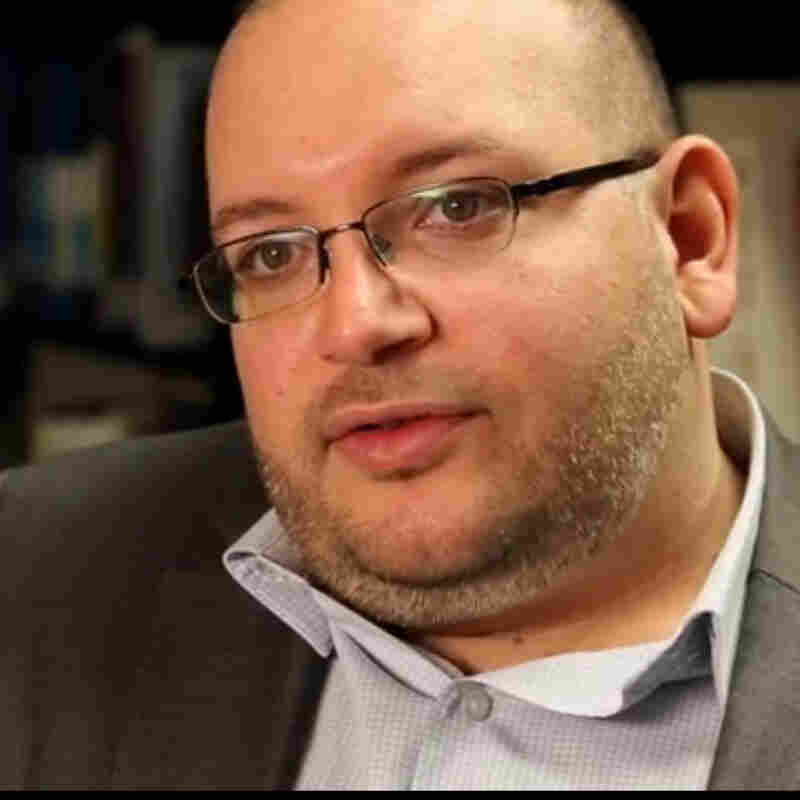 Jason Rezaian, shown on Nov. 6, 2013, is being released from Iranian custody after nearly a year and a half in prison. The Washington Post/Getty Images hide caption

Along with his wife, Iranian journalist Yeganeh Salehi, Rezaian was detained by Iran in July 2014. She was later released, but Rezaian was kept in custody, and faced serious charges — from spying to supporting hostile governments.

They're allegations that his employer and his family have roundly rejected.

"He never had access to any kinds of private information or secret information," Rezaian's brother, Ali Rezaian, told Melissa Block in April 2015. The idea that he was doing anything other than being a journalist and living a normal life in Iran is just absurd."

Amir Hekmati was born in Arizona and went to high school in Michigan. He served in the Marines as an Arabic translator.

He was detained by Iran in 2011 — which means he spent more time in Iranian custody than any of the other prisoners released by Iran today. 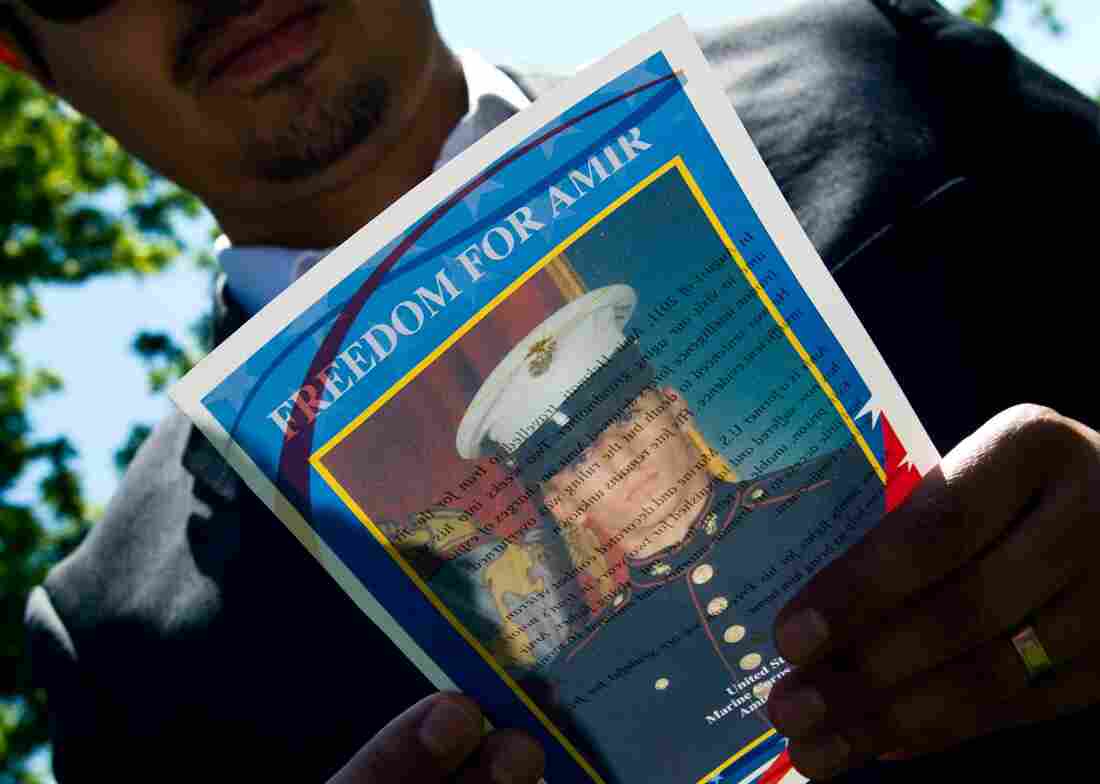 A man reads a flier with a photo of U.S. Marine veteran Amir Hekmati on May 19, 2014, during a vigil held in Lafayette Park across from the White House in Washington, D.C. The vigil was held on the 1,000th day of Amir's imprisonment in Iran. Hekmati was set to be released Saturday as part of a prisoner exchange. Karen Bleier/AFP/Getty Images hide caption 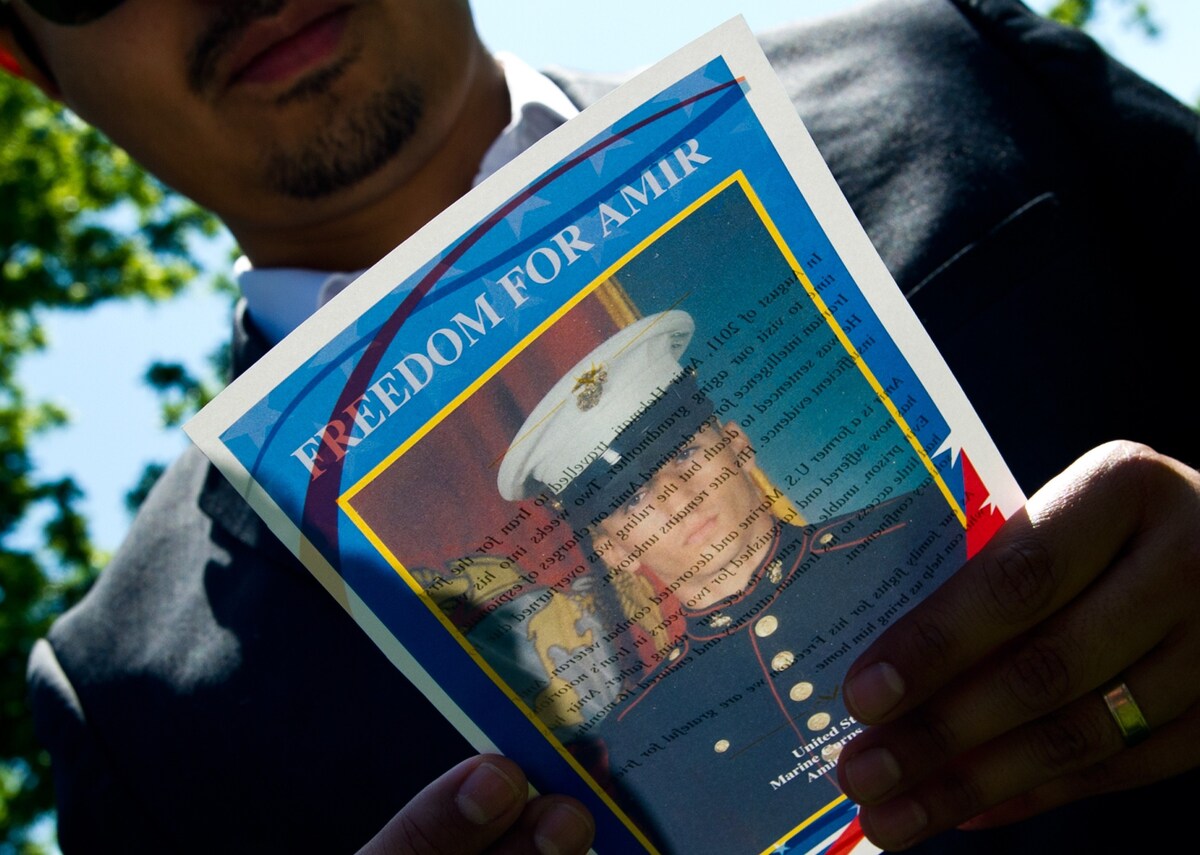 A man reads a flier with a photo of U.S. Marine veteran Amir Hekmati on May 19, 2014, during a vigil held in Lafayette Park across from the White House in Washington, D.C. The vigil was held on the 1,000th day of Amir's imprisonment in Iran. Hekmati was set to be released Saturday as part of a prisoner exchange.

His family says he was in Iran to visit his grandmothers when officials picked him up and accused him of spying for the CIA.

"The Iranian authorities are denying that Amir is a United States citizen, despite the fact he was born in Flagstaff, Arizona," Hekmati's mother, Behnaz, wrote in 2012. " Amir did not engage in any acts of spying, or 'fighting against God,' as the convicting Judge has claimed in his sentence. Amir is not a criminal. His very life is being exploited for political gain.

"A grave error has been committed."

Hekmati's sister was in the audience for President Obama's State of the Union address this past week. She told NPR's Michele Kelemen it's been emotional torture for her brother and her family to talk about his case.

Saeed Abedini, a pastor, converted from Islam to Christianity more than 15 years ago.

He was visiting Iran in 2012 to build an orphanage, his wife says — "and very unexpectedly, they put him under house arrest."

He was sentenced to eight years in prison on charges of disturbing national security.

Last year his wife, Naghmeh Abedini, testified to Congress that her husband had been told he wouldn't be released from prison unless he converted back to Islam.

"Saeed has endured periods of solitary confinement, beatings, internal bleeding, death threats, and continued psychological torture, all because he would not deny his Christian faith," she said in her testimony.

In 2013, Naghmeh Abedini told NPR's Rachel Martin about her family's experience — and why her husband continued to proselytize to his fellow inmates.

Little is known about the fourth prisoner being released as part of the exchange.

A fifth prisoner is being released by Iran, separate from the prisoner exchange:

Trevithick's imprisonment in Iran for 40 days was not widely reported. His release was simultaneous to, but not part of, the prisoner exchange.

The U.S. Institute for Peace said in a statement that Matt Trevithick worked at the American University of Afghanistan and the American University of Iraq, and co-hosted a biweekly podcast called Sources and Methods. He was a research assistant at the Woodrow Wilson Center, a writer whose work was featured in The Atlantic and The Wall Street Journal, among other outlets, and a rower. He coached the Iraqi and Afghan national rowing teams, the USIP says.

"We are profoundly grateful to all those who worked for his release and are happy for all the families whose loved ones are also heading home," Trevithick's family said in a statement.

Imprisoned or missing Americans not being released:

Some early media reports indicated that Siamak Namazi, a businessman reportedly detained by Iran in October 2015, was included in the media release.

Iranian media and U.S. officials have indicated that his release has not been negotiated.

The whereabouts of retired FBI agent Robert Levinson are unknown. He disappeared under mysterious circumstances in 2007, after traveling to the Iranian island of Kish. The AP has reported he was working on an unauthorized CIA mission, a charge the White House has denied. His family received "proof of life" videos and photos of him in 2010 and 2011.

A U.S. official tells NPR's Michele Kelemen that Iran has committed to cooperating with America to locate Levinson's whereabouts.

The seven Iranians and Iranian-Americans who will be receiving clemency were at different stages in the U.S. justice system — some were convicted, some facing trial. Their offenses mostly involved sanctions violations.

Mondanlo was found guilty of violating the trade embargo to help launch the first Iranian satellite ever put into orbit. He was a mechanical engineer with degrees from George Washington University, who said in court he managed space and science programs for the Department of Defense and NASA, as well as corporations.

For seven years, court documents allege, Mondanlo worked to circumvent the sanctions against Iran and assist Iran in striking a satellite agreement with Russia. He made $10 million for his efforts, the Justice Department says.

Bahram Mechanic is awaiting trial in Texas, charged with exporting millions of dollars worth of electronics to Iran.

"Mechanic, a dual citizen who has lived in America for more than 30 years, denies the charges," Reuters writes. "Attorneys for Mechanic said these components were widely available at U.S. retail stores. Prosecutors said some of the parts could have been used in missile targeting. But they said their sale even for civilian use broke the law under the sweeping trade embargo with Iran."

Afghahi, a man in his early 70s, co-owned Mechanic's business and is accused of assisting in his sanction violations, according to an indictment.

Faridi, 46, was an employee of Mechanic's company and is accused of helping in the same sanction violations.

Ghahreman, a nationalized U.S. citizen, was convicted of money laundering and trade embargo violations for attempting to export various navigation equipment and electronics to Iran.

He earned a degree in maritime engineering in Iran, and worked at shipyards in the U.S. He was charged with acting as the "face" of a front company, based in Dubai, that existed to shuttle goods from the U.S. to Iran. Prosecutors noted that some of the goods involved had potential military applications.

Ghareman has said he did not know the goods were destined for Iran, Reuters reports

Golestaneh pleaded guilty last month to participating in a cyber-hacking attack in 2012. The target, a Vermont-based software company, was a U.S. defense contractor, Reuters reports.

Ali Saboonchi, 34, was convicted of violating the trade embargo in 2014. A jury found him guilty of conspiracy and of exporting industrial products and services to Iran.

The U.S. has also removed Interpol red notices and dismissed charges against 14 Iranians, none of whom are in U.S. custody, for whom the U.S. determined extradition requests were unlikely to succeed.