Accessibility links
In Final Report, Experts Identify Remains At Notorious Reform School : The Two-Way Florida's Dozier School for Boys is a horror tale come to life. Nearly 100 boys died at the school, many unidentified, in unmarked graves. Scientists are trying to discover who they were. 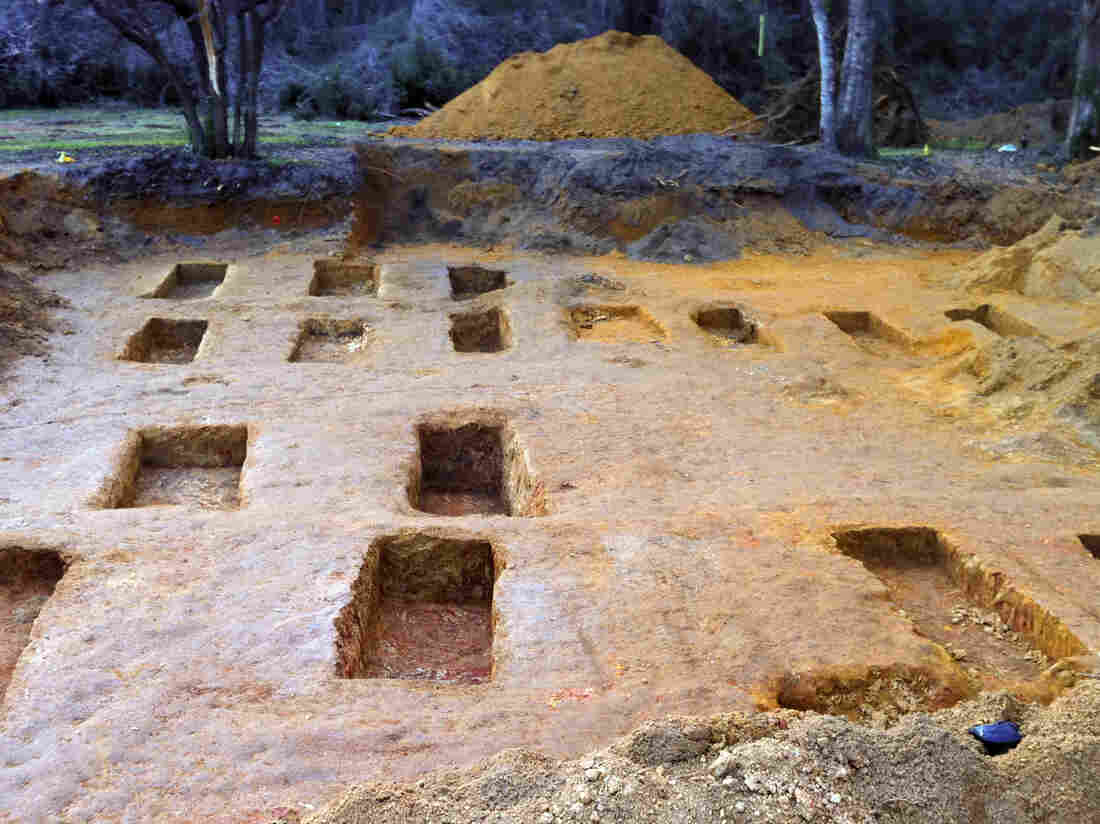 Researchers from the University of South Florida found some of the remains of 55 people in a graveyard at the Dozier School for Boys in Marianna, Fla. USF Anthropology Team/AP hide caption 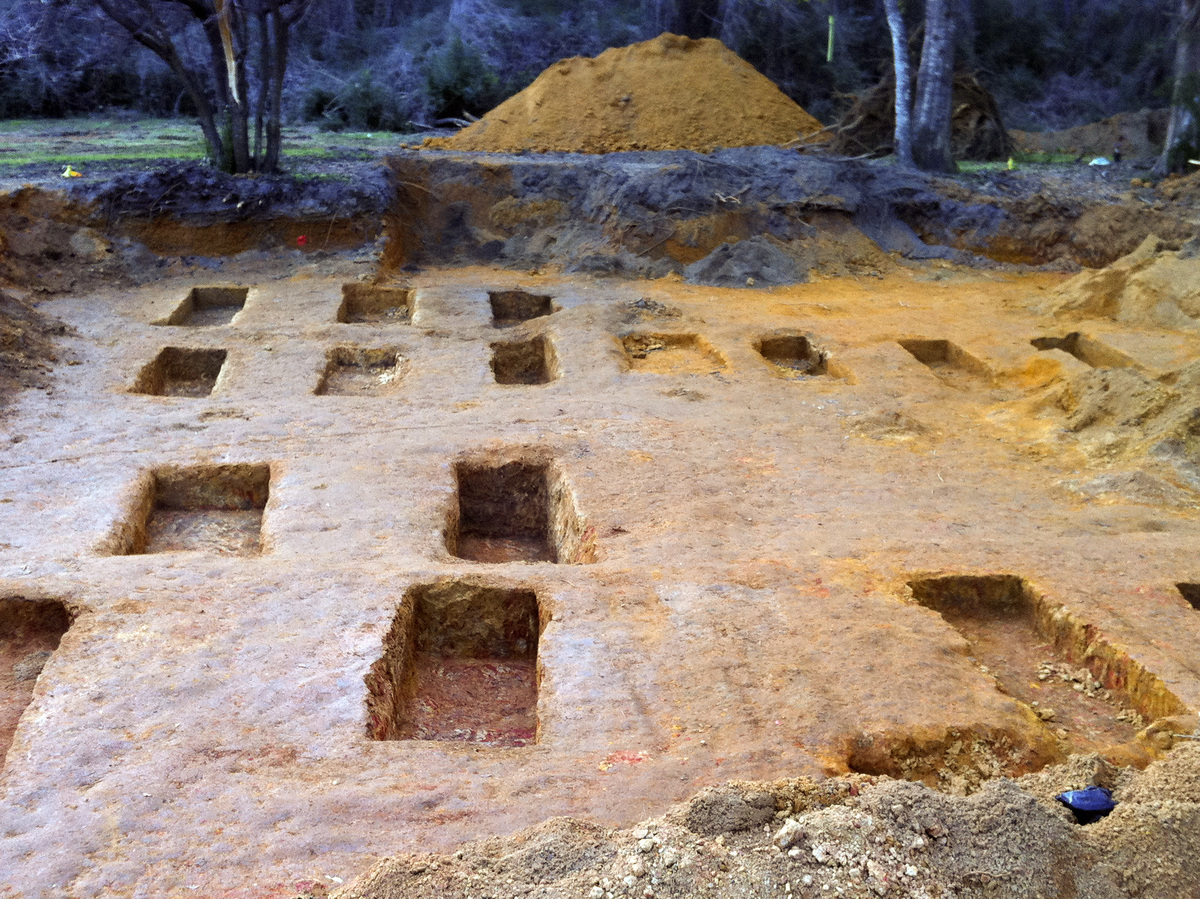 Researchers from the University of South Florida found some of the remains of 55 people in a graveyard at the Dozier School for Boys in Marianna, Fla.

"There's just too many stories," Roger Kiser, who was at the school in the 1950s, told NPR in 2012. "I know of one [boy] that I personally saw die in the bathtub that had been beaten half to death. I thought he'd been mauled by the dogs because I thought he had ran. I never did find out the true story on that. There was the boy I saw who was dead who came out of the dryer. They put him in one of those large dryers."

Closed since 2011, the reform school was located in the small panhandle town of Marianna, Fla., and served as a bleak destination for troublemakers, rule breakers and delinquents. In the 1900s, hundreds of boys were sent to the school — some never left.

Historical records show that nearly 100 boys ages 6 to 18 died at the school between 1900 and 1973. Many are not identified and were buried in unmarked locations. Researchers from University of South Florida, led by forensic anthropologist Erin Kimmerle, have spent the past three years exhuming human remains from the school's land, ultimately discovering 51 sets of remains. The final report released Thursday says "in total, 55 burials were located ... at the former reform school."

It says that 13 of the graves were located in the school's cemetery and "the rest of the graves were outside this area in the woods, including under a roadway, brush, and a large mulberry tree." The researchers also announced that "seven positive DNA matches and 14 presumptive identifications have been made," noting that two of the DNA matches had not been released previously.

The new report is the latest development in a years-long process to identify the remains and reunite them with surviving family members. Many of the remains, however, are still unidentified.

"Kimmerle says her team is committed to working with the families to identify the rest of the remains if possible and the work will continue," NPR's Greg Allen tells All Things Considered. Greg, who has reported extensively on the murky history of the reform school, said some of the details surrounding the boys' deaths are "sketchy."

"A lot of orphans were there that did not have places at times and they were sent to Marianna. They weren't there for any crime whatsoever," said Jerry Cooper, who was sent to the school in 1961 when he was 16. "But we had many, many boys who [were] there for smoking in school, that were incorrigible. We weren't bad kids. We might have needed help in some respect. But that wasn't the place to find it, I'll tell you that right now."

Nicknamed the "White House Boys" after a small but infamous building on school property, called the White House, where violent punishments were meted out, the men described vicious beatings and mistreatment at the hands of school administrators.

In 2008, Florida's former Gov. Charlie Crist ordered state investigators to look into the allegations of abuse, torture and deaths at the school. The Florida Department of Law Enforcement interviewed the White House Boys and former school staff but said it couldn't find enough evidence to support the accusations.

The release of the new report isn't likely to change that. The report does not weigh in on whether anything criminal occurred, saying its stated mission was to identify remains. But some of the details have raised new concerns.

The report says a small lead ball "consistent with [a] Buck size shot pellet" was found in one grave, indicating a possible bullet wound. It also highlights disparities in treatment between black boys and white boys. The school's demographic was predominantly African-American, and more African-American boys died. But as the report lays out, African-American boys were three times as likely to be unnamed in historical records and buried in unmarked locations.

As for the yet-unidentified remains, their reinterment is something of a sticking point.

"The White House Boys are adamant that the remains should be reinterred far from the old Dozier school and not in the the nearby town of Marianna or even in that county there," Greg said. "Many feel the town was complicit in the mistreatment of boys who were held at the school."

He added, "Some officials and business leaders from Marianna ... were on hand today here today in Tallahassee to express interest in the future of the 1,400-acre property. One that I talked to said the town was willing to acknowledge its past, to apologize and to move on. Some of the White House Boys told me that they're now ready to do the same."