Accessibility links
Massive Blizzard Works Its Way Up The East Coast : The Two-Way A storm heading up the East Coast is coating roads in ice and blanketing regions in snow, and has shut down Washington, D.C., and several other major cities. 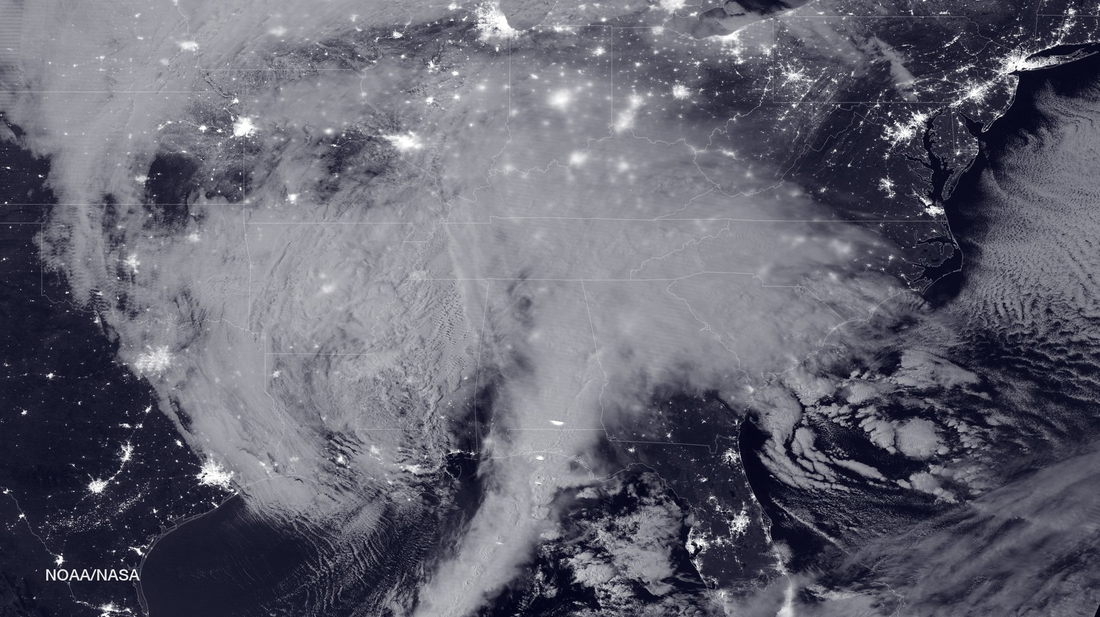 An image taken by satellite in the wee hours of Friday morning shows the storm bearing down on the East Coast. NOAA hide caption 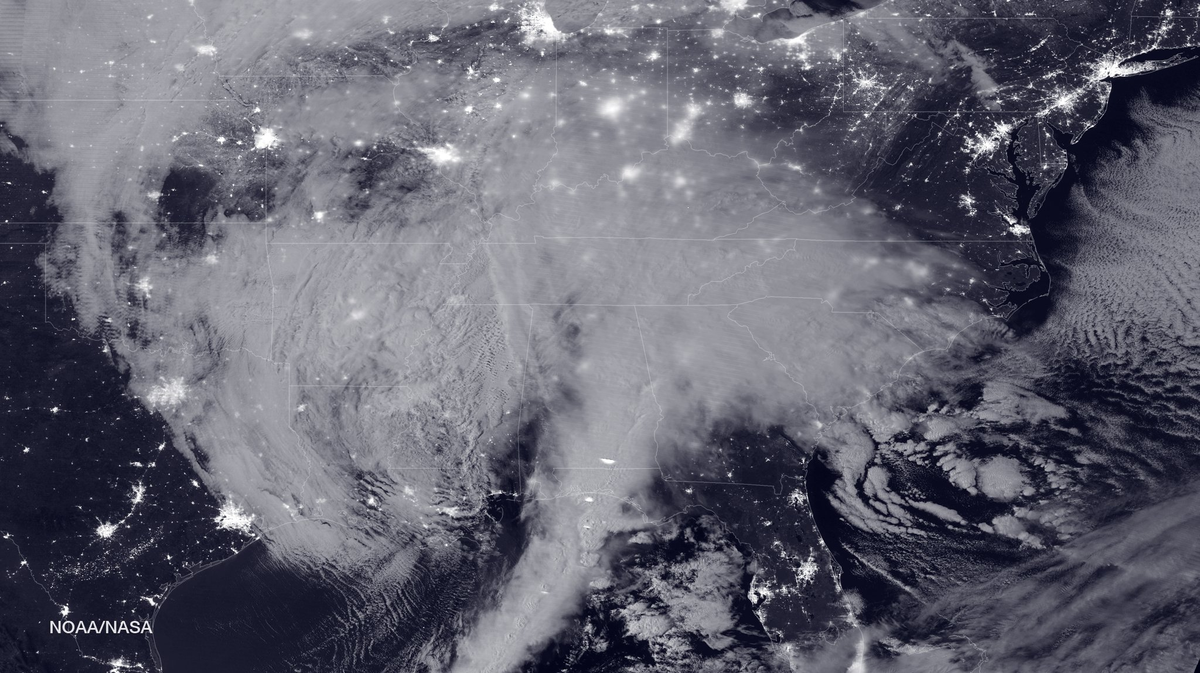 An image taken by satellite in the wee hours of Friday morning shows the storm bearing down on the East Coast.

These probabilities go through Sunday AM. Note DC is in 90% for 12+ inches of snow! Be safe everyone! #winterstorm pic.twitter.com/mqki85h1QU

By 8 a.m. ET, the roads in Roanoke, Va., were coated. And in the early afternoon, a wet, driving snow was falling rapidly in D.C. and West Virginia.

It was the start of an anticipated 36 hours of snow that will blanket the East Coast, burying the nation's capital and potentially hobbling travel throughout the region.

The storm was predicted to be potent and shows no sign of falling short of expectations. The Associated Press summed the situation up: "One in seven Americans will get at least half a foot of snow outside their homes when this weekend's big storm has finished delivering blizzards, gale-force winds, white-out conditions and flooding to much of the Eastern United States."

The National Weather Service is anticipating snowfall between 1 and 2 feet from eastern Kentucky to New Jersey and more than 2 feet across portions of the Mid-Atlantic, including Washington, D.C., and Baltimore. Forecasts call for 12 to 18 inches in Philadelphia and up to a foot in New York City. The National Weather Service reported late Friday that snow drifts had reached more than 5 feet in parts of West Virginia. 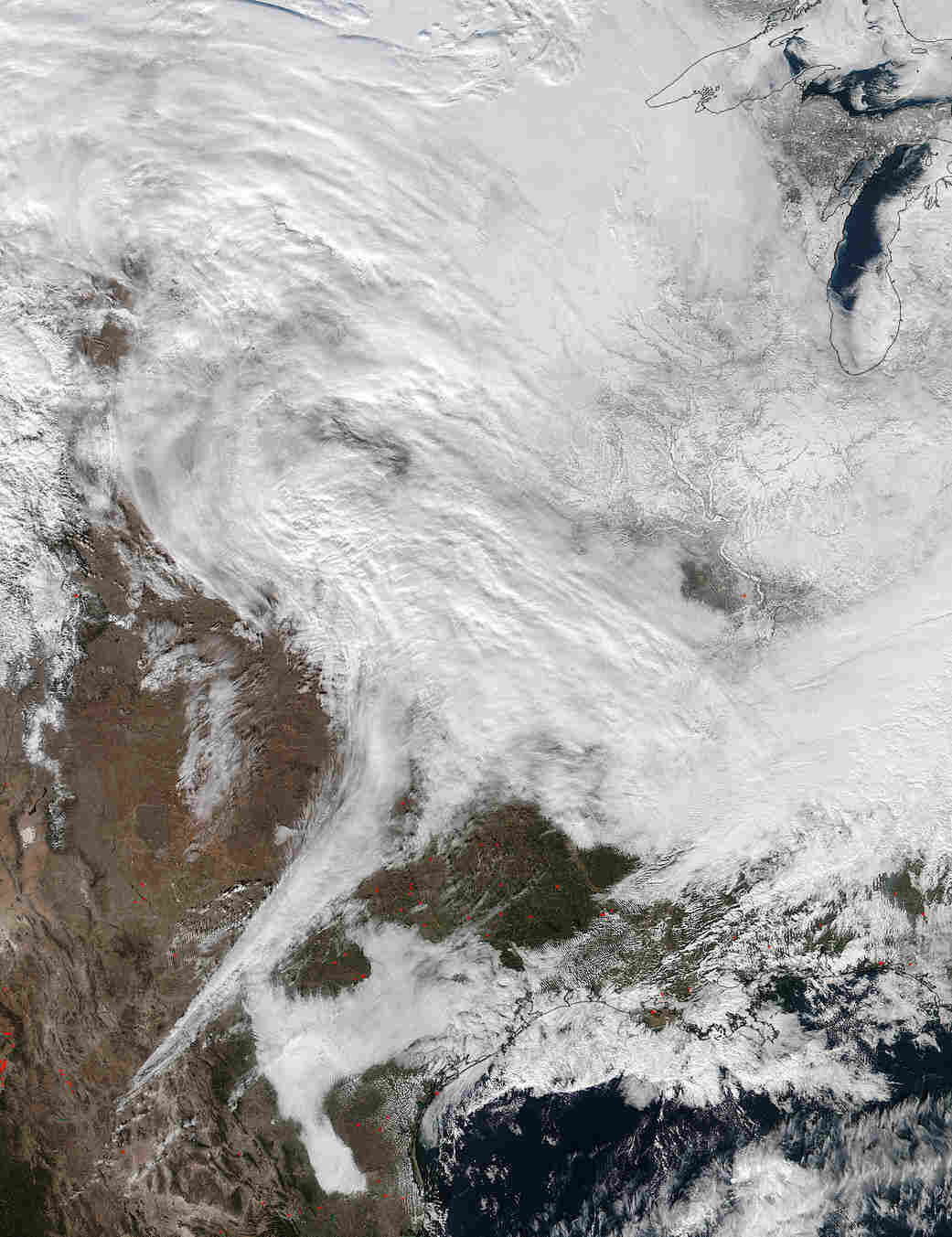 NASA's image of the day Thursday showed the storm on Wednesday, when it was still building over the central U.S. The storm system started in the Pacific ocean, tracked across the U.S. to the Gulf Coast and then moved toward the Mid-Atlantic region. NASA Goddard Rapid Response hide caption

Approximately 50 million people are in the path of the storm, the AP reports. Several states and cities have battened down ahead of the storm. State offices are closed across Tennessee, the AP reports, and that state, Delaware Georgia, Maryland, North Carolina, New Jersey, Pennsylvania, Virginia and West Virginia have all declared a state of emergency.

Federal offices in D.C. sent employees home early on Friday — leading the State Department to ask for more time to release former Secretary Hillary Clinton's emails — and the city's buses and subway system are shutting down tonight, and expect to stay offline the entire weekend. Baltimore's MTA has also shut down.

And somehow it gets wilder. Our winter wx expert: "I've never seen a run like this ever" https://t.co/9X7PqNdSEQ pic.twitter.com/zTVQyIzNvt

Those traveling by plane might be in for a struggle, too: Some flights through Nashville, Philadelphia and Newark, N.J., have been canceled, and by late Friday FlightAware.com's "Misery Map" showed an total shutdown in Charlotte and Washington.

In the world of sports, two NBA games, an NHL game, numerous college basketball games and the NASCAR Hall of Fame induction ceremony were all postponed, the AP reports.

The storm is predicted to be a blizzard, with high winds and white-out conditions, in addition to bucketloads of snow. There's even the possibility of thundersnow. But that's not all: The storm is also expected to cause a storm surge that could lead to major coastal flooding. The storm surge could be as high as 5 feet, according to The Washington Post's Capital Weather Gang.

Multiple people already have died in car accidents on icy roads, and North Carolina's state troopers told ABC that they'd responded to more than 1,200 wrecks by the early evening. But Weather Prediction Center meteorologist Paul Kocin tells the AP that he hopes the timing of the storm — hitting over the weekend — as well as the advance warning will help minimize the number of deaths.

Meteorologists and government officials across the East Coast are warning residents to stay home, stay warm and stay off the roads. But D.C. residents who dare step out into the post-blizzard world can enjoy one activity — legally — for the first time in decades.

Sledding down Capitol Hill had been banned for years. But in the omnibus budget deal that Congress passed last year, the legislators indicated that from now on, they're going to let it slide.

We'll keep this post updated with photos and details as the storm rolls in.

You can watch it progress on radar, thanks to our friends at WNYC: