Accessibility links
California Regulators Order Company To Permanently Close Leaking Gas Well : The Two-Way A well on the outskirts of LA has been spewing natural gas into the air for months. Once it's sealed off, regulators say, it can never be tapped again. Other new restrictions are also being imposed.

LISTEN: Ingrid Lobet On The Technology Of The Leaking Well 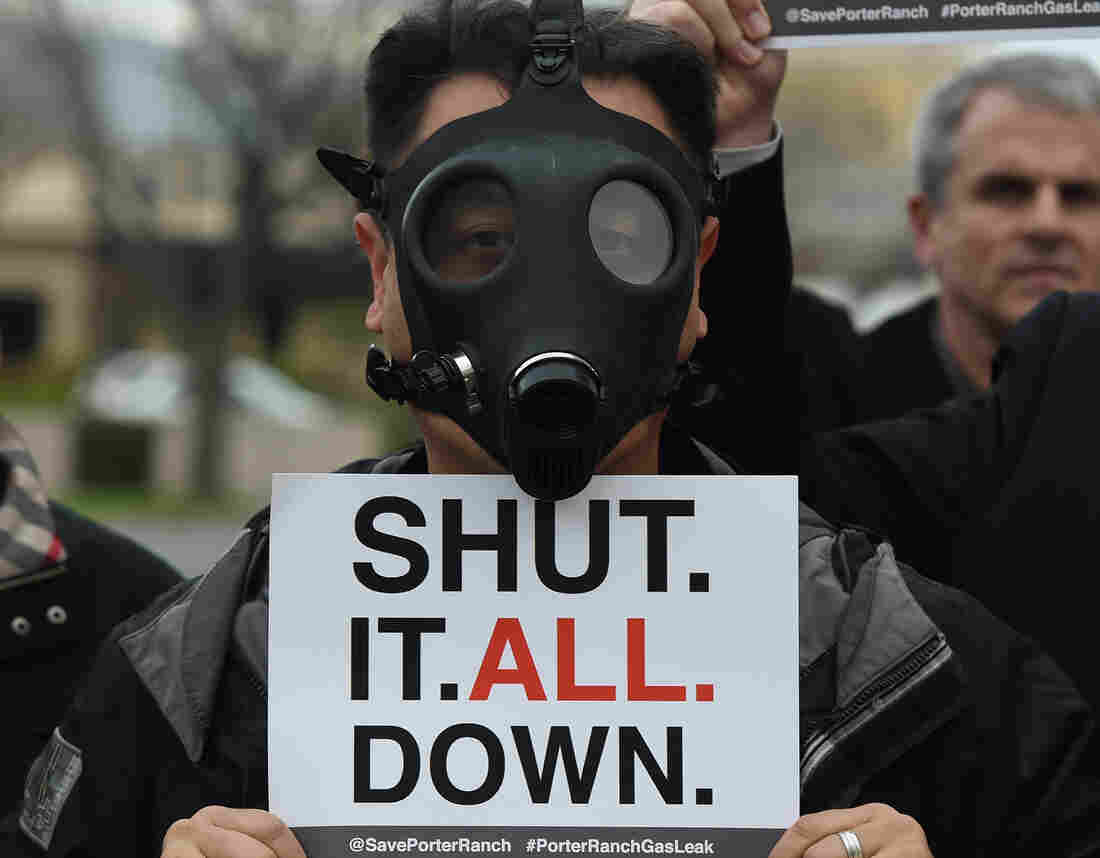 A Porter Ranch resident wears a gas mask during a protest Saturday outside a meeting of the Air Quality Management Board over the Aliso Canyon gas leak. The leak started in October and has forced thousands of residents to flee from the Los Angeles suburb of Porter Ranch. Regulators have ordered the gas company to shut down the leaking well; some residents want the entire facility shuttered. Mark Ralston/AFP/Getty Images hide caption 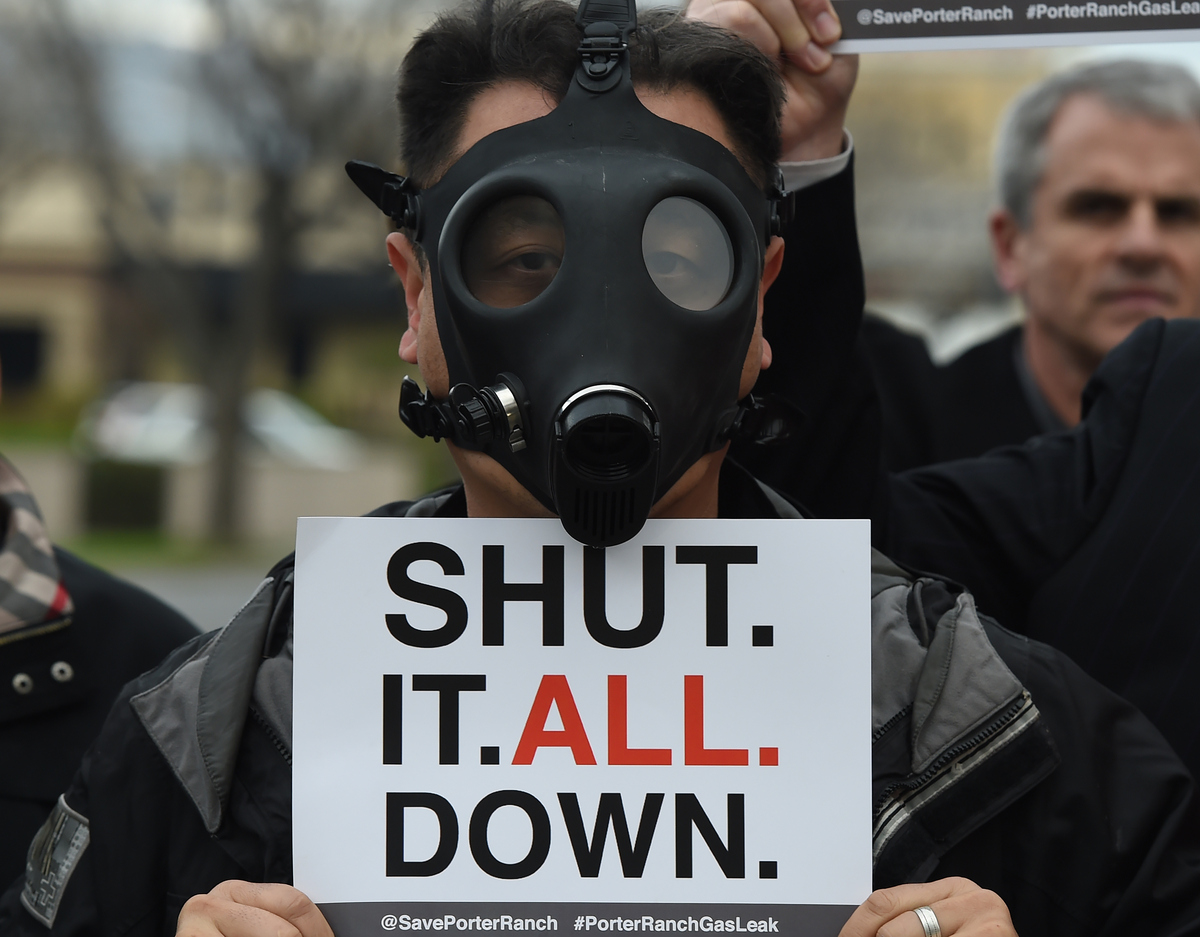 A Porter Ranch resident wears a gas mask during a protest Saturday outside a meeting of the Air Quality Management Board over the Aliso Canyon gas leak. The leak started in October and has forced thousands of residents to flee from the Los Angeles suburb of Porter Ranch. Regulators have ordered the gas company to shut down the leaking well; some residents want the entire facility shuttered.

When Southern California Gas Company finally manages to seal a natural gas storage well that's been leaking for months, the company will have to shut the well down permanently, California regulators say.

And in the meantime, the company will have to minimize air pollution from the ongoing leak and fund an independent study on potential health impacts on the surrounding community.

The South Coast Air Quality Management District voted on the new restrictions Saturday. The order comes in response to a well in the Aliso Canyon natural gas storage facility that has been leaking since October, and isn't expected to be sealed off for another month.

The massive leak, in the outer reaches of Los Angeles, mostly consists of methane, a potent greenhouse gas, but also contains some the carcinogen benzene and other chemicals. The AP has said SoCalGas was not consistently alerting the public of unusually high levels of benzene. The company says none of the levels were dangerous.

The compounds added to natural gas to make it easier to detect also have short-term side effects, including nausea and headaches, health officials say. Residents of the nearby Porter Ranch community have been relocated to new homes while the company works to cap the well.

Southern California Gas Company says the leak poses no long-term risks to human health. One of the requirements of the new abatement order is that the company fund an independent study evaluating the impact of the leak on residents' health — including the consequence of exposure to the odorants added to the gas.

The order also requires the company to:

Some residents were unhappy that regulators didn't go further and order SoCalGas to shut down the entire Aliso Canyon facility, the Los Angeles Times reports

As we've reported, California Gov. Jerry Brown declared a state of emergency over the leaking well earlier this month.

The company attempted to plug the well several times, but the pressure of the leak overwhelmed the would-be blockages. The failed efforts appear to have weakened the well and increased the risk of a blowout, the LA Times has reported.

SoCalGas is now drilling a relief well to reduce the pressure before plugging the leak.

On All Things Considered last week, Ingrid Lobet of the investigative news organization inewsource reported on the injection practices that may have contributed to the well's failure:

"An examination of state oil and gas records shows, and a state official confirms that the gas well that failed was being injected in a way that, while legal, can be risky," she said. "It's like this: Many wells have both a seven-inch casing and a narrow inner metal tubing. Think of it as a metal straw within another metal straw.

"Natural gas was being forced down this well through both straws."

LISTEN: Ingrid Lobet On The Technology Of The Leaking Well

Experts told Lobet that injecting and withdrawing only through the inner tubing is safer, and protects the well.

The well, which was drilled in 1953, was used heavily — with injections almost daily, Lobet says. "Like many wells its age, it also didn't have a full cement job. Cementing protects underground aquifers and it protects the well, too."

Lobet said the company declined to comment on its practices, but that a representative had previously said it would be premature to talk about the cause of the well failure.