Accessibility links
A Look At Egypt's Uprising, 5 Years Later : The Two-Way Human rights groups say the situation in Egypt is worse now than it was under dictator Hosni Mubarak. But at the time, one activist says, "the sense of possibility was real." 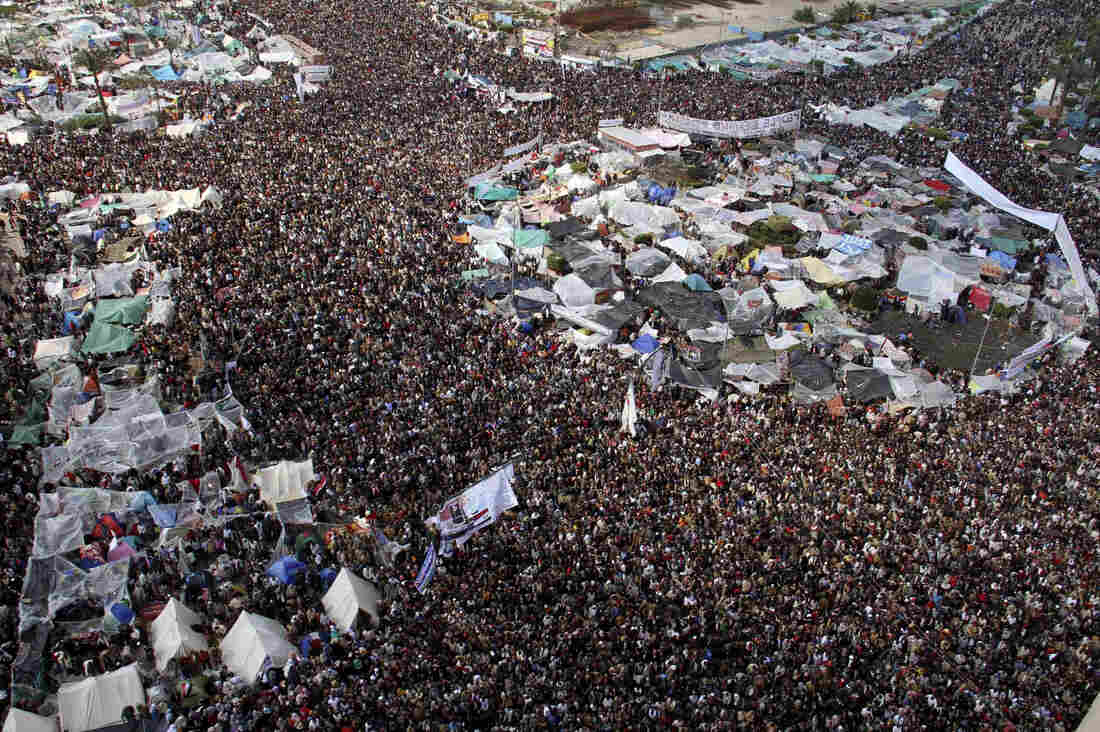 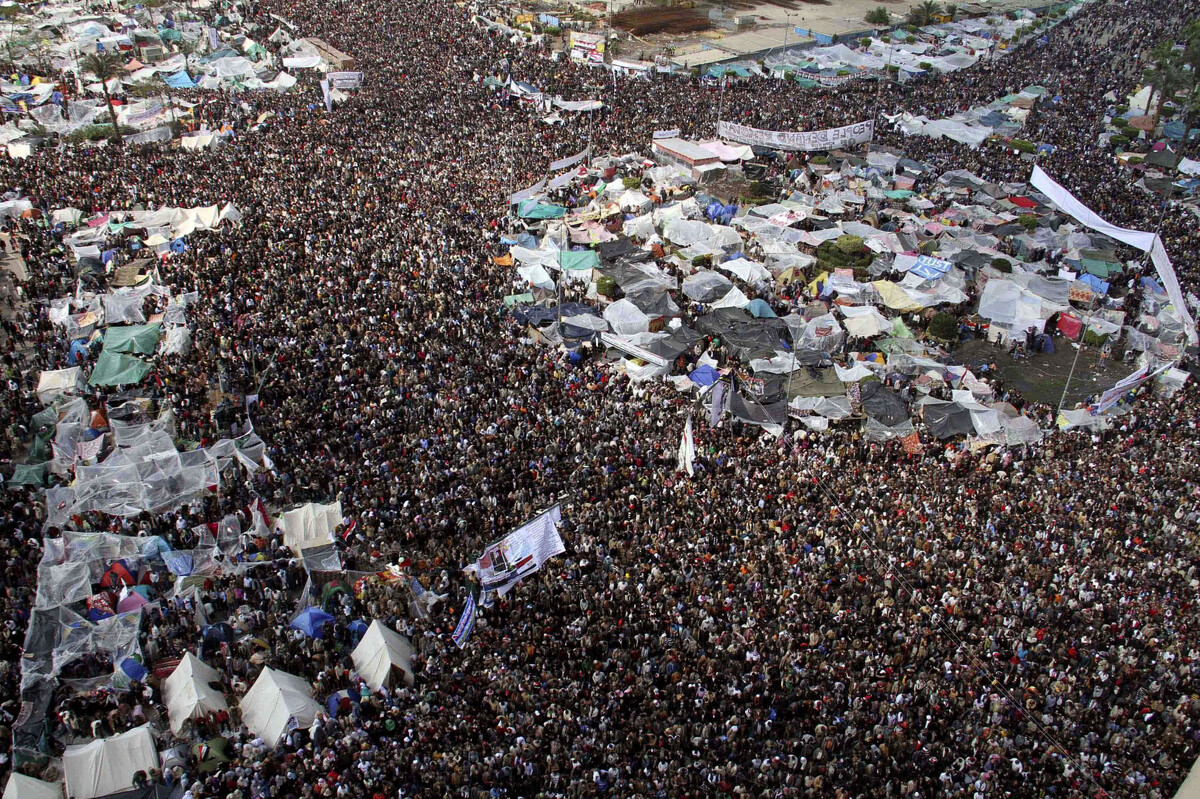 Tens of thousands of anti-government protesters gather in Tahrir Square in Egypt on Feb. 11, 2011, the day Hosni Mubarak stepped down.

On this day five years ago, tens of thousands of Egyptians flooded into Cairo's Tahrir Square.

It was the start of an uprising that would unseat Egypt's longtime dictator, Hosni Mubarak, 18 days later.

Police initially allowed protesters leeway but then cracked down with tear gas and water cannons. Here's Soraya Sarhaddi Nelson's dispatch from the streets of Cairo on that first day:

Soraya spoke with a protester who, like many others, came out to demonstrate for the first time hoping for political and economic freedom.

Eighteen days later, and after more than 800 people died in bloody battles with police and Mubarak supporters, Egypt's military assumed control of the country. NPR's Lourdes Garcia-Navarro filed this report on the scenes of jubilation from Tahrir Square:

"Every Egyptian feels that the country really belongs to them. The country is back," one protester told Lourdes.

It felt like a new beginning for Egypt. Hopes were sky-high that this marked a turning point, where the revolution's demands of "bread, freedom and social justice" could be fulfilled.

In reality, it was the beginning of a tumultuous transitional period. Activists continued to protest, concerned the military would refuse to loosen its grip on power even after elections.

Egypt's best-organized political force, the Muslim Brotherhood, won the most seats in Parliament in the first post-uprising vote. And in mid-2012, the Brotherhood's candidate, Mohammed Morsi, narrowly beat out a candidate from the previous regime.

Morsi's rule was divisive — and the military pushed him from power a year later in July 2013, following mass demonstrations against his rule. What followed was a sweeping crackdown on dissent against Morsi's allies and other political opponents of the regime. Egyptian security forces killed hundreds of Morsi's supporters when they forcibly cleared two encampments in August 2014.

Morsi's Muslim Brotherhood was branded a terrorist organization and excluded from the political process.

Military leader Abdel Fattah el-Sissi, who led the coup against Morsi, would go on to win the presidential election in 2014 with 96 percent of the vote.

Rights groups say human rights violations now are worse than they were under Mubarak. The government has outlawed all protests not pre-approved by the government. Security forces have arrested tens of thousands of political opponents.

As Egyptian security forces face a burgeoning insurgency and increasingly sophisticated militant attacks, the government has justified the crackdown by saying it is fighting terrorism.

"Anyone, from wearing a T-shirt condemning torture to expressing their views on TV, on university campuses, can and will be detained," Rabab el-Mahdi of The American University in Cairo said on Morning Edition. "This is the most repressive moment that we have seen in the past 40 years in Egypt." 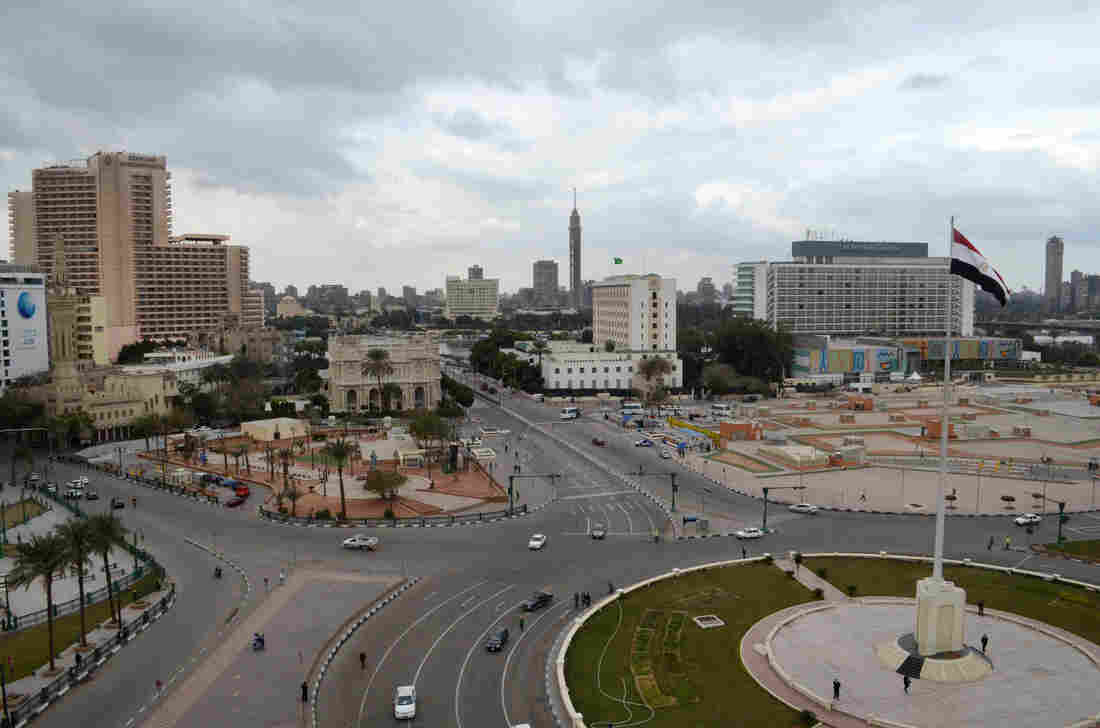 Ahead of the anniversary, police reportedly targeted activists in the area and carried out mass raids of nearby apartments.

""We have taken several measures to ensure activists don't have breathing space and are unable to gather, and several cafes and other meeting places have been closed, while some have been arrested in order to scare the rest," an Egyptian security official told Reuters.

There were about 300 people demonstrating in Tahrir Square on Monday, Reuters reported, "not to celebrate the instigators of revolution ... but to praise the police who tried to stop them."

Now, many of the 2011 uprising's most prominent faces sit in prison. Others have fled Egypt or have gone silent.

One of Egypt's best-known activists, Alaa Abdel-Fattah, published a letter from a Cairo prison where he is serving a five-year sentence for protesting. "The only words I can write are about losing my words," he writes in The Guardian. He adds:

"It has been months since I wrote a letter and more than a year since I've written an article. I have nothing to say: no hopes, no dreams, no fears, no warnings, no insights; nothing, absolutely nothing...I try to remember what it was like when tomorrow seemed so full of possibility and my words seemed to have the power to influence (if only slightly) what that tomorrow would look like.

"But one thing I do remember, one thing I know: the sense of possibility was real. It may have been naive to believe our dream could come true, but it was not foolish to believe that another world was possible. It really was. Or at least that's how I remember it."