Accessibility links
Amherst College Drops Mascot Criticized As Offensive : The Two-Way Amherst will not use the unofficial symbol "Lord Jeff," which is based on an English general who advocated giving Native Americans blankets infected with smallpox. 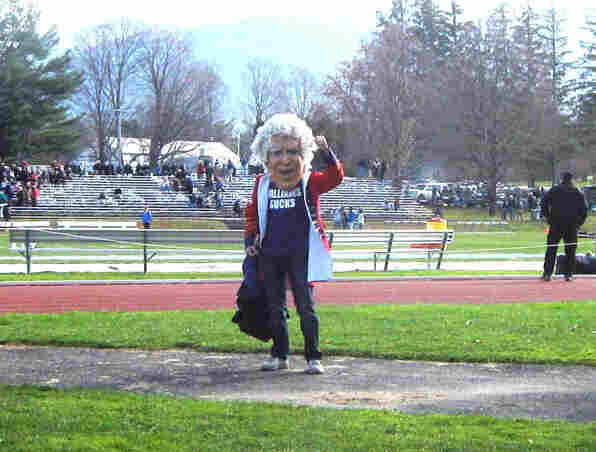 Amherst College says it will stop using the controversial "Lord Jeff" as an unofficial mascot following complaints that the character is racist.

The mascot is a caricature of Lord Jeffery Amherst, an English general who proposed giving blankets from smallpox patients to Native Americans.

"Could it not be contrived to send the Small Pox among those disaffected tribes of Indians?" Lord Amherst wrote in one letter, the college says.

In later correspondence, Amherst wrote, "You will do well to try to inoculate the Indians by means of blankets, as well as try every other method that can serve to extirpate this execrable race."

While Amherst advocated the idea, the college says "there is no evidence that any infected blankets were distributed at his command."

Campus student activists have been calling for the university to abandon Lord Jeff, The New York Times reports.

"Hundreds of students calling themselves the Amherst Uprising staged a sit-in at the library, presenting the administration with a list of demands — one of which was formally cutting ties with Lord Jeff, who was criticized as an inappropriate symbol and offensive to many members of the student body."

Proponents of keeping the mascot "saw his removal as an affront to campus traditions," the Times reports.

Following Tuesday's decision, the board of trustees said "Amherst College finds itself in a position where a mascot — which, when you think about it, has only one real job, which is to unify — is driving people apart because of what it symbolizes to many in our community." Here's more:

"It is fair to recognize that historical context may influence, or make us cautious about, judgments concerning Jeffery Amherst the man. It is equally fair to decide that 18th-century standards should not govern a 21st-century choice of symbol."