Accessibility links
For-Profit DeVry University Is Sued Over Employment Figure Claims : The Two-Way The school maintains that 90 percent of its graduates who are looking for work find employment in their field. The Federal Trade Commission calls that statement deceptive. 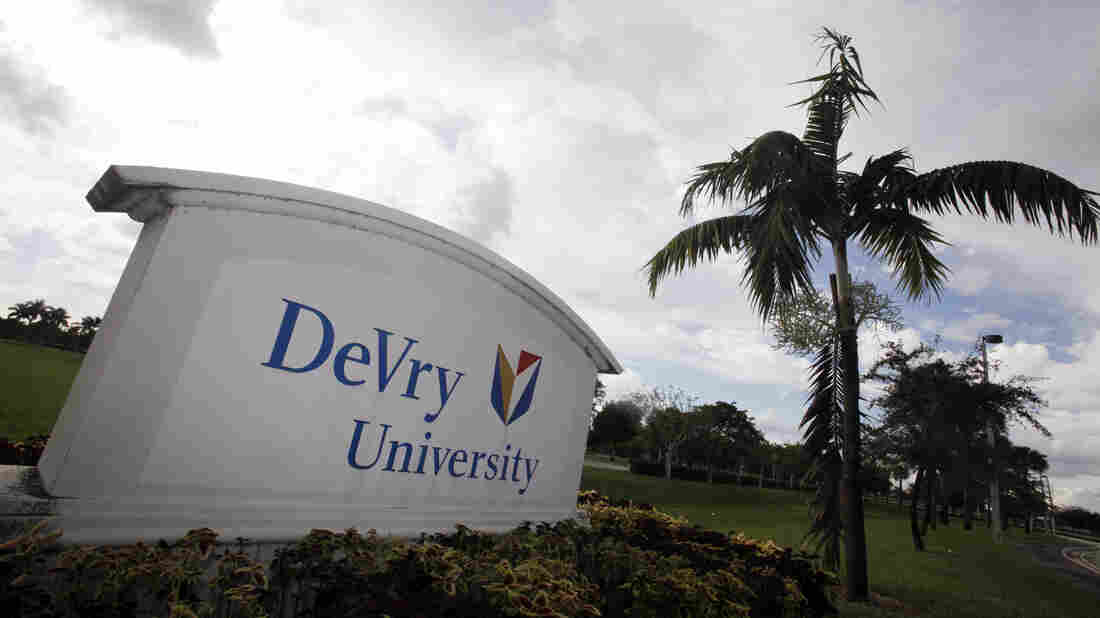 The entrance to the DeVry University in Miramar, Fla.

DeVry University, which has at least 55 locations across the U.S., advertises that 90 percent of its graduates seeking employment found jobs in their field within six months of graduation.

That claim by the for-profit university is coming under fire. The Federal Trade Commission has filed a lawsuit against the university's operators, saying the ads are deceptive.

The FTC is also targeting DeVry's claim that "its graduates had 15 percent higher incomes one year after graduation on average than the graduates of all other colleges or universities."

It says that, in some cases, graduates were wrongly classified as having found a job in their field. For example: a business administration major with a health services focus who was working as a server in a restaurant.

It also claims some students were not counted as seeking employment when they were demonstrably still doing so.

DeVry maintains the FTC lawsuit is "without a valid legal basis." In a statement, the DeVry Education Group argues that the complaint "contains anecdotal examples that exaggerate the allegations but do not prove them."

It claims its figures are calculated rationally and transparently, and vows to "vigorously contest" the lawsuit.

Also on Wednesday, the Department of Education told DeVry that it is starting a process that requires the university to "cease making certain representations regarding its students' post-graduation employment outcomes." That includes the widely-advertised 90 percent claim.

DeVry's stocks tumbled after the news, closing the day more than 15 percent down.