Accessibility links
4 Militants Remain In Oregon Wildlife Refuge, As FBI Negotiations Go On : The Two-Way "We all want to leave," says one militant who's still in the refuge. "We're here, and we're worried we're going to die." Late Thursday, the FBI released video of Tuesdays fatal traffic stop. 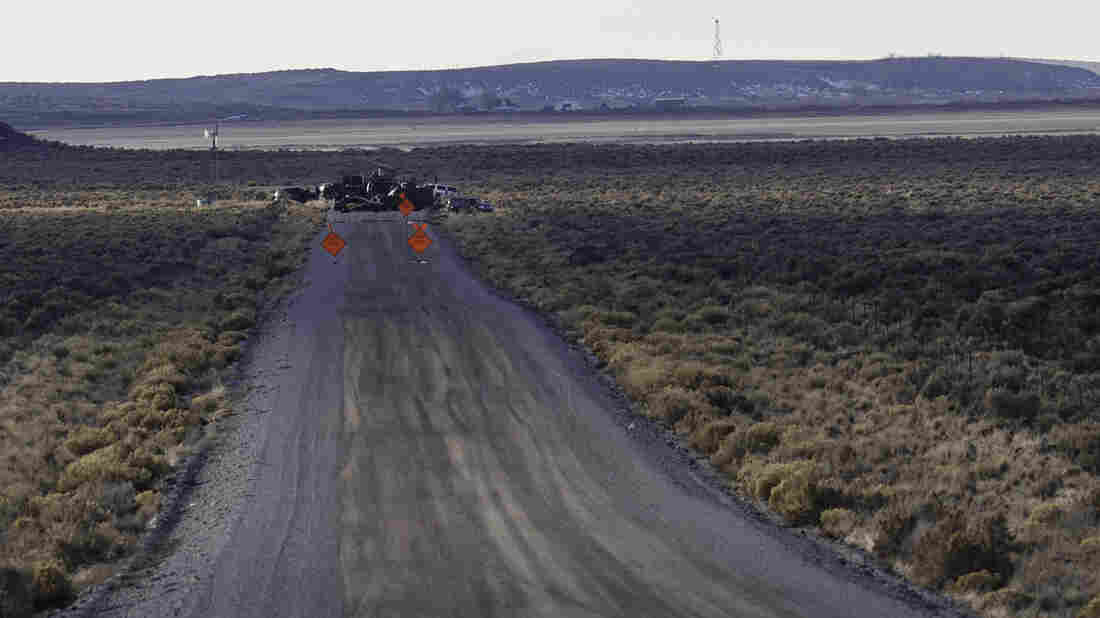 Police operate a checkpoint as part of a containment strategy around the Malheur Wildlife Refuge near Burns, Ore., on Wednesday. Although leaders of the group that occupied the federal site were arrested, armed militants remain at the refuge. Rob Kerr/AFP/Getty Images hide caption 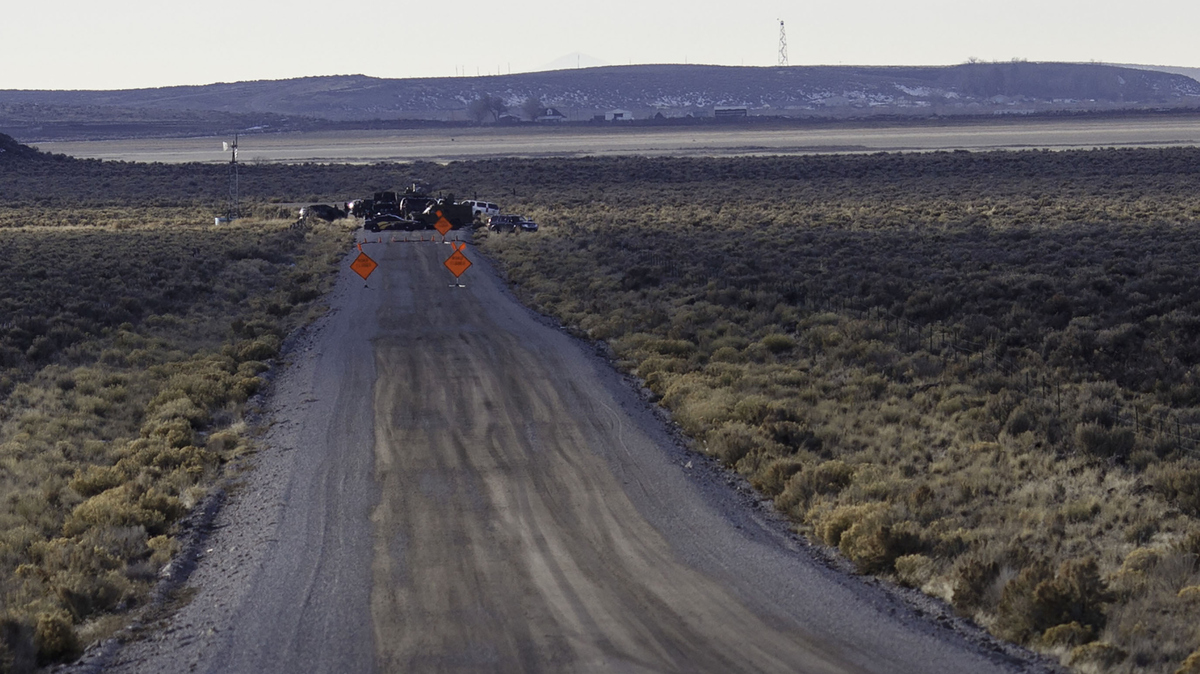 Police operate a checkpoint as part of a containment strategy around the Malheur Wildlife Refuge near Burns, Ore., on Wednesday. Although leaders of the group that occupied the federal site were arrested, armed militants remain at the refuge.

In a press conference, the FBI said Thursday night that four militants still remained at the wildlife refuge, but that the perimeter around them had been reduced.

They also announced that the full video of the arrest of Bundy and several other militants, as well as the shooting death of LaVoy Finicum, had been released.

The FBI said that, at the time he was shot, Finicum was reaching his hand toward a pocket that later was found to hold a loaded 9mm handgun.

Warning: This video may be considered graphic.

With 11 militants now arrested — including their leader, Ammon Bundy — and another dead, federal agents are trying to get the remaining occupiers of the Malheur National Wildlife Refuge to leave, according to Oregon Public Broadcasting.

Speaking from inside the refuge, militant David Fry says that as of Thursday morning, only four people remain.

"We have new leaders now and new plans," he told OPB late Wednesday.

Another militant inside the refuge, Sandy Anderson of Riggins, Idaho — whose husband, Sean, is believed to be targeted by a federal arrest warrant — also spoke to OPB today.

The remarks come despite a message from Bundy to stand down, which was delivered by Bundy's attorney Wednesday as the militants' leader and six others appeared in federal court.

Saying that he's asking the authorities not to prosecute the militants, Bundy said:

"To those remaining at the refuge, I love you. Let us take this fight from here. Please stand down. Go home and hug your families. This fight is ours for now in the courts. Please go home."

After Bundy was apprehended Tuesday — along with six others in Oregon and one in Arizona — the FBI and the Oregon State Police set up a series of checkpoints around the refuge, saying they were establishing a "containment" zone. A day later, the FBI says eight more people were intercepted as they left the compound, and three were arrested.

The arrest of Bundy and the killing of LaVoy Finicum during Tuesday's arrest operation set off "chaos" inside the refuge, according to a video that was released by militants early Thursday. Like other videos, it features Fry, who set up the group's website.

"It was absolute chaos," Fry says in the video. "People were just grabbing their things ... and just fleeing, driving in their cars and zooming out. A lot of people left even their guns, lots of guns and stuff behind. I mean, that's how crazy it is."

After saying that women and children were among those who left, Fry goes on to say that despite receiving word that law enforcement agencies are willing to let people go without being charged, questions remain.

Speaking over a video that shows a campfire in the driveway of the refuge, Fry then says, "Right now, the situation is that, out of five people left here, four of us are allowed to leave, and one of them has to — he's charged with a felony, he has a felony warrant."

The charge on that warrant seems to be the same one that the arrested militants are facing: "conspiracy to impede officers of the United States from discharging their official duties through the use of force, intimidation, or threats."

Saying "everybody feels it's unfair," Fry says that those inside the refuge have told the federal negotiator that they're willing to go:

"Just let us leave right now. We're willing to leave. And if they want to check the guns for — if it's stolen guns or what-not — we're agreeing to that. We're being reasonable and trying to be peaceful."

But the militants are insisting that the warrant against the one militant be dismissed first. The negotiator's response was that it's not possible to drop the felony charge, Fry says — something he says is "kind of silly."

Led by Bundy, the militants have been occupying the Malheur National Wildlife Refuge near Burns, Ore., since early this month as part of an ongoing dispute between ranchers and the federal Bureau of Land Management.