Accessibility links
Diplomats Pledge Nearly $11 Billion In Aid For Syria At Donor Conference : The Two-Way The pledges made in London surpassed the goal of $9 billion. Participants are also discussing incentives for countries struggling with an influx of refugees and ways to improve humanitarian aid. 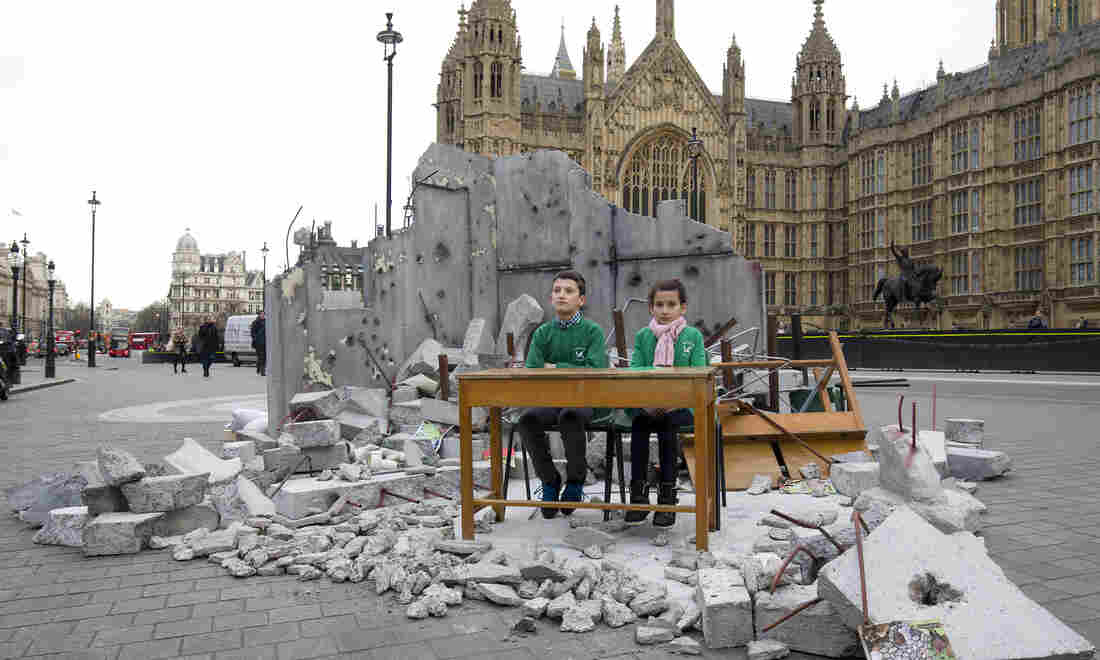 Two children whose school was bombed in Aleppo pose in a mock destroyed classroom — set up by the charity Save the Children — outside the Houses of Parliament in London on Wednesday, one day before a donor conference aiming to raise money for victims of Syria's war. Justin Tallis/AFP/Getty Images hide caption 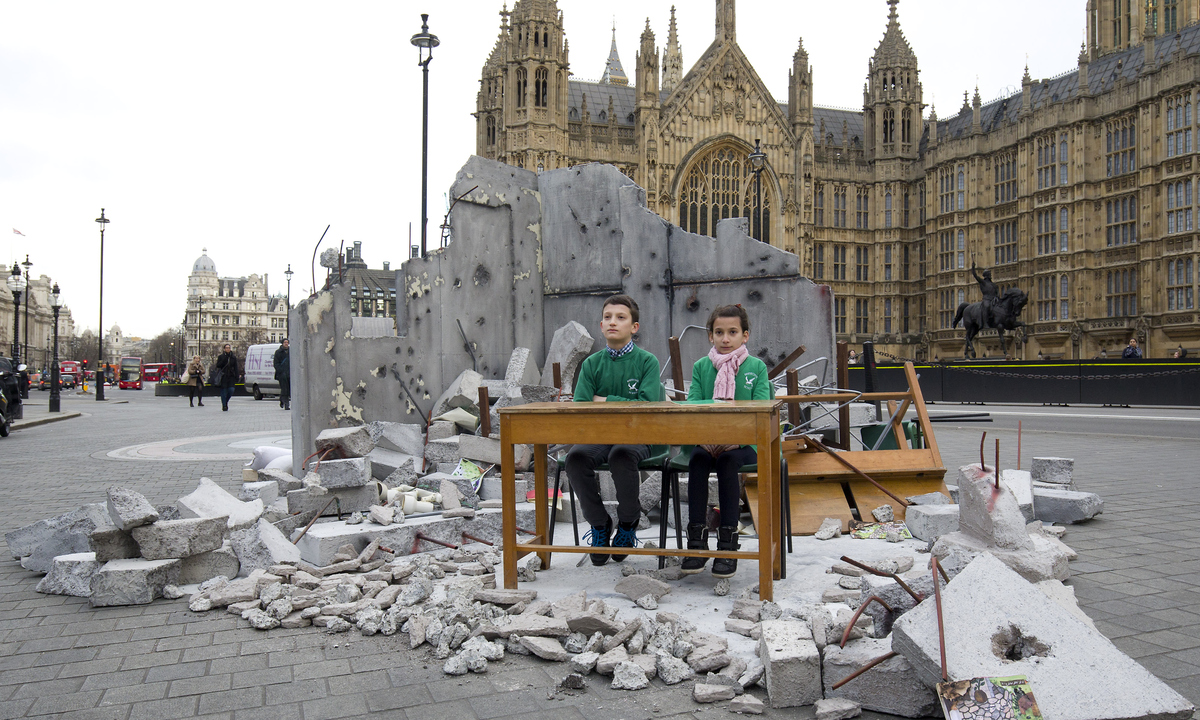 Two children whose school was bombed in Aleppo pose in a mock destroyed classroom — set up by the charity Save the Children — outside the Houses of Parliament in London on Wednesday, one day before a donor conference aiming to raise money for victims of Syria's war.

At a one-day donor meeting in London, leaders and diplomats from 20 countries around the world have gathered to pledge funds to help victims of the ongoing crisis in Syria.

They hoped to raise $9 billion; they pledged a total of nearly $11 billion.

You can see some of the pledges, and hear about the conference from NPR's Greg Myre, over at Here & Now.

Among the noteworthy pledges: The U.S. has committed about $900 million, and Britain has offered $1.75 billion between now and 2020.

The conference was far more successful than previous attempts to raise funds for Syria. At an aid conference last year in Kuwait, The Associated Press reports, the goal was to raise $7 billion — and the nations gathered managed only half that amount, requiring cutbacks to things such as refugee food aid.

But money isn't everything. Before the conference began, NPR's Alison Meuse reports from Beirut, activists were worried that little of the collected aid would reach besieged Syrians.

About a million Syrians are currently under siege, living in areas that are actively blockaded by rebel or regime forces. An estimated 4.6 million people have fled the war-torn country, and millions more are displaced inside the nation's borders; some 250,000 have been killed, NPR's Leila Fadel reports.

In addition to offering funds, the countries gathered will discuss economic incentives for countries struggling with the number of Syrian refugees they're hosting, as well as how to improve the delivery of humanitarian aid to refugees and get refugee children into schools.

European countries hope that providing more support for refugees in the Middle East will stem the tide of Syrians making the dangerous journey to Europe.

But the king of Jordan made his own plea at the gathering, the AP writes:

"Jordan's King Abdullah said his country could not sustain unaided the burden of almost 1.3 million Syrian refugees, who now make up a fifth of Jordan's population.

" 'We are doing our best against very difficult odds,' he said, but added: 'We have reached our limit.

" 'Our country will continue to do what we can do to help those in need, but it cannot be at the expense of our own people's welfare.' "

The donor conference is being held while U.N.-sponsored proximity talks between the Syrian government and some opposition groups are on hold for three weeks. The talks were paused as fighting intensified in Syria: The regime of President Bashar Assad, with backing from Russian airstrikes, cut off the main rebel supply line between Aleppo and Turkey this week, Alison Meuse reported Wednesday.

Meanwhile, a 7-year-old Syrian girl with a rare form of cancer was airlifted to Italy with her family, according to the AP.

Her trip was made possible by a so-called humanitarian corridor launched by an Italian Catholic-Protestant collaboration. It's a pilot project aiming to airlift about 1,000 particularly vulnerable refugees — the sick, elderly or disabled, and women alone with young children — and spare them the perilous sea journey to Europe.