Accessibility links
Outrage Over Egyptian President's Red Carpet Arrival : The Two-Way The massive red carpet at the opening of a social housing project has sparked a barrage of criticism in a country suffering from high levels of poverty. 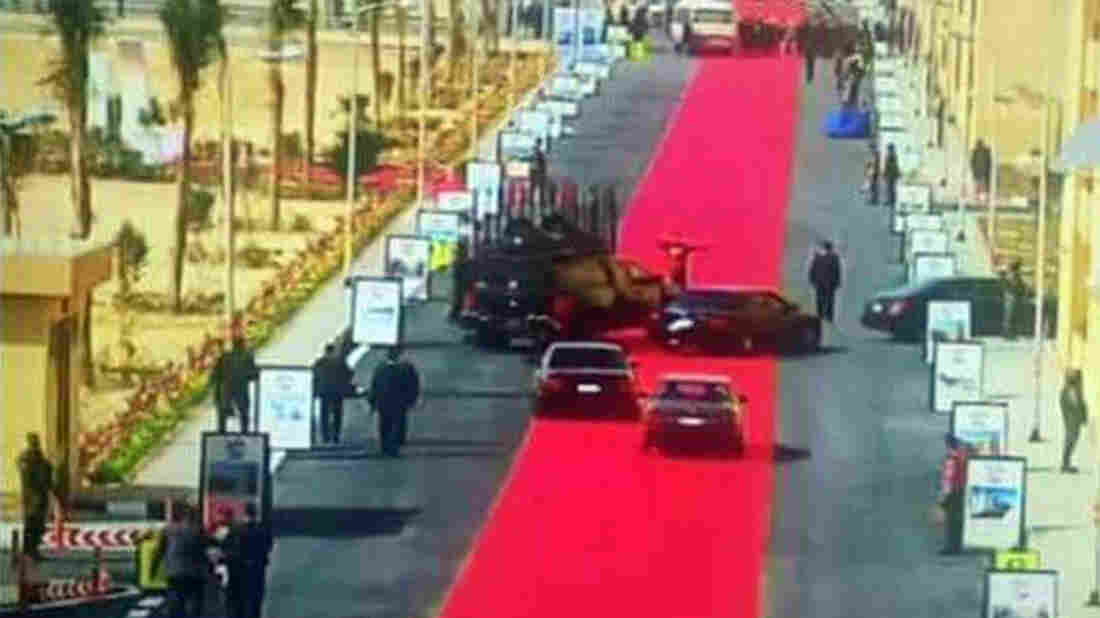 Egyptian President Abdel-Fattah el-Sissi's motorcade drives on a red carpet during a trip to open a social housing project in a suburb of Cairo on Saturday. One local newspaper devoted its entire front page Monday to accusing Sissi of decadence even as he asks Egyptians to tighten their belts. AP hide caption 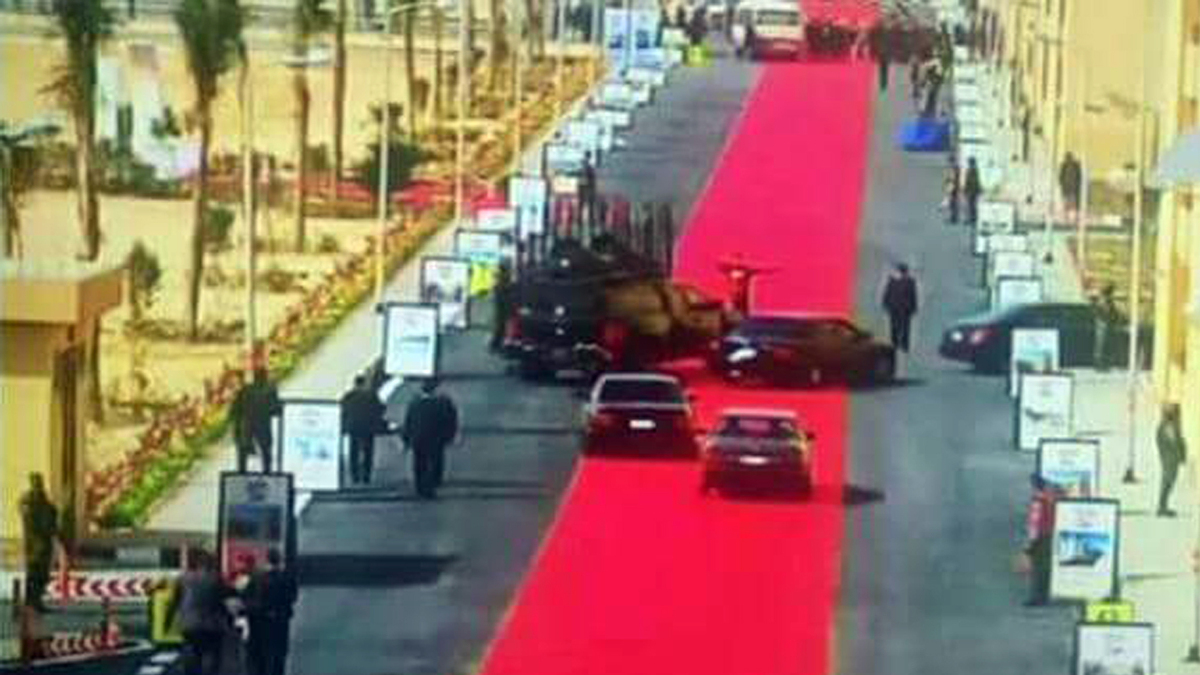 Egyptian President Abdel-Fattah el-Sissi's motorcade drives on a red carpet during a trip to open a social housing project in a suburb of Cairo on Saturday. One local newspaper devoted its entire front page Monday to accusing Sissi of decadence even as he asks Egyptians to tighten their belts.

Egyptian President Abdel-Fattah el-Sissi rolled up with his motorcade over a massive red carpet to the opening of a social housing project, sparking outrage about apparent wastefulness in a country suffering from high levels of poverty.

According to local media reports, the red carpet was rolled out in 6th of October City, a suburb of Egypt's capital Cairo.

Egyptian media, which is largely supportive of the president, was unusually critical of the entrance.

"What is this?" says talk show host Youssef Hosseini, sounding shocked. "It's not the responsibility of Sissi — the red carpet — but who was the one responsible? ... Why did they do it and on what basis?"

You can see the scale of the massive red carpet starting at 0:38 of this video from Hosseini's show on the independent, pro-government ONTV channel. The carpet weaves through the suburb's streets and even appears to wrap through a sporting club.

At a time when Sissi's human rights record is under fire, his use of the red carpet drew uncomfortable comparisons to prominent dictators.

"The Sultan [of Brunei] doesn't even drive in a car on a red carpet," Hosseini says, suggesting that buying blankets for the poor would be a better use for this money.

And in a cartoon by Andeel on the independent news website Mada Masr, a speech bubble from under a red carpet saying "At least we are not like Syria and I...," which abruptly stops as a car rolls over it.

Since he came to power in 2014, the former military leader has staked his reputation on reforming Egypt's ailing economy, which was hard-hit by years of unrest following the ouster of longtime dictator Hosni Mubarak in 2011.

More than 1 in 4 Egyptians lives below the poverty line, according to government figures.

Quickly after taking office, Sissi slashed Egypt's bloated fuel subsidy system — a move that economists said was necessary but that previous leaders had been either unable or unwilling to do.

Sissi's flashy entrance on Saturday stood in stark contrast to his remarks at the inauguration ceremony — in which he called for Egyptians to "contribute to combating ongoing challenges through rationalizing consumption rates," according to a statement from his office. He "noted the importance of raising the citizens' awareness of the challenges that the state faces as well as of the cost of services they are offered, which exceeds the value of what they pay for."

Sissi also suggested that the state may need to make cuts to its funding for clean water, The Associated Press reports.

"He said the state spends around 40 million pounds ($5.1 million) a day to provide clean water, with only part of the cost passed on to consumers.

" 'One (cubic) meter of water that reaches you costs me this much, and you are taking it by that much, and the state is unable to continue this way,' el-Sissi said in a televised conference."

The news service says Brig. Gen. Ehab el-Ahwagy appeared on several talk shows following widespread criticism about the red carpet, saying "that the carpet was not purchased by el-Sissi's administration and had been used for more than three years on similar occasions."