Accessibility links
Oregon Occupation Ends As Last Holdout Surrenders : The Two-Way Three of the last four armed occupiers of the Malheur National Wildlife Refuge had surrendered earlier this morning. The last man has now given himself up, bringing an end to the 41-day occupation. 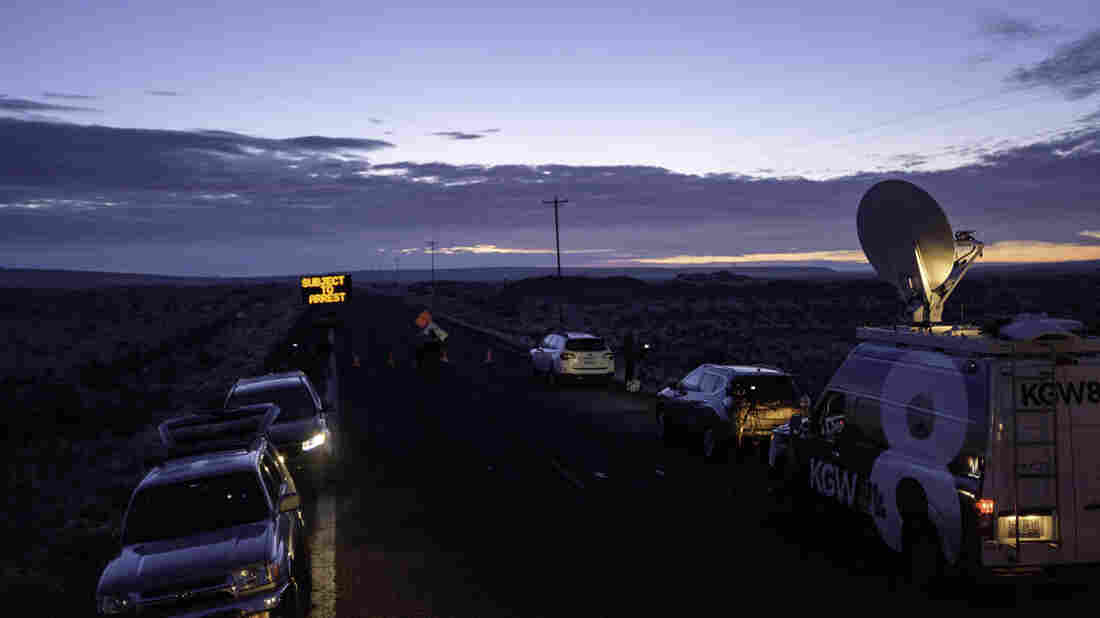 Media wait at a checkpoint about 4 miles from the Malheur Wildlife Refuge Headquarters near Burns, Ore., as the sun rises on Thursday. The FBI had surrounded the last four protesters holed up at a federal wildlife refuge in Oregon and were waiting for them to surrender. Rob Kerr/AFP/Getty Images hide caption 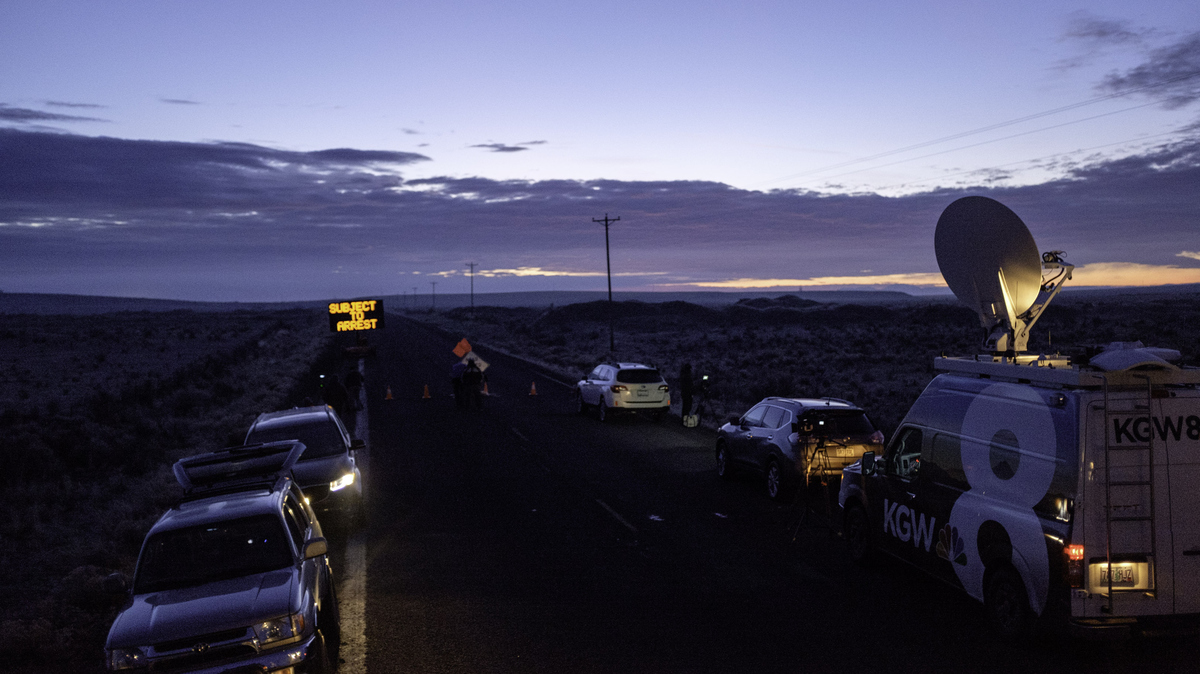 Media wait at a checkpoint about 4 miles from the Malheur Wildlife Refuge Headquarters near Burns, Ore., as the sun rises on Thursday. The FBI had surrounded the last four protesters holed up at a federal wildlife refuge in Oregon and were waiting for them to surrender.

After 41 days, the Oregon occupation is over: All four militants who remained at the Malheur National Wildlife Refuge have surrendered to the FBI.

David Fry, Jeff Banta, Sean Anderson and Sandy Anderson were the last four militants left at the wildlife refuge near Burns, Ore., on Thursday morning. A group of armed anti-federalists had taken over the refuge in early January, saying they were protesting the convictions of two Oregon ranchers on arson charges.

Banta and the Andersons left their weapons behind and walked into FBI custody on Thursday morning. More than an hour later, Fry followed them.

"No one was injured, and no shots were fired," the FBI said in a statement.

After the other three occupiers left, Fry initially said he wouldn't surrender. "I will die a free man," he said in a phone call with political activist Gavin Seim that was live-streamed online.

Fry said the government was refusing to listen to his grievances, which include the fact that he believes his tax dollars are funding abortions. At one point he said he had a gun to his head and was feeling suicidal; at other times, he said he needed promises of protection, and a way to control how his tax dollars were spent, before he turned himself in.

"Man wasn't made to be put behind bars for standing up for his own rights," he said later.

After a tense conversation with activists and with the FBI, Fry finally asked the FBI if they'd shout "Hallelujah" and told the activists he was handing himself in.

"I'm gonna grab one more cookie," he said, "one more cigarette. Alrighty then."

After audible shouts of "Hallelujah" and Fry saying he was walking toward the FBI, his audio then cut out.

Oregon Public Broadcasting reports that Fry was friends with LaVoy Finicum, the refuge occupier who was shot and killed by law enforcement at the end of January.

The Thursday morning surrender — which was supposed to include all four occupiers — was negotiated with the help of Nevada state Assemblywoman Michele Fiore and evangelical leader Franklin Graham.

(You may know Fiore for her guncentric family photos and calendars; The Washington Post has a profile. The Rev. Franklin Graham is the son of televangelist Billy Graham.)

The deal was arranged in a series of calls that were live-streamed online Wednesday night and Thursday morning, with tens of thousands of people tuning in.

On the calls, Fiore expressed support for the occupiers but urged calm and called for peace. She also checked in to make sure the militants had eaten breakfast, had coffee and water, used the bathroom. "It could be a long day today," she said early Thursday.

The occupiers repeatedly indicated they thought they might be killed by the FBI. At times, they indicated it would be the best thing that could happen for their cause. "Kill me. Get it over with," Fry said on Wednesday night.

On Thursday morning, Fiore exhorted them to lead by example and said they needed to stay alive to tell their stories.

Fry described in the live-stream how the other three occupiers left their guns behind and gave themselves up to the FBI. Once they had left, he said he had no intentions of following them.

Some people involved in the negotiation had been concerned the deal might not go through at all because Nevada rancher Cliven Bundy was arrested Wednesday night. Original plans had included Bundy's presence at the surrender, OPB's John Sepulvado says.

Bundy was charged with conspiracy and assault on a federal officer over his 2014 standoff with federal agents at his Nevada ranch, The Associated Press reported Thursday.

"Cliven Bundy was traveling to Oregon to raise support for his sons and four militants still holding out at the Malheur National Wildlife Refuge when FBI agents arrested him at the Portland airport," Sepulvado reported for our Newscast unit.

"Bundy's daughter, Bailey Bundy, said her father was indicted on conspiracy charges," Sepulvado says. "Before departing from Nevada, Cliven Bundy had called for supporters to come to Burns, Ore. He said in a statement, 'Gather as many people as possible, and go now.' "

But while supporters might have been nearby, inside the refuge, Fry appeared to feel alone.

KrisAnne Hall, an activist on the call who was trying to persuade Fry to leave, told him the country is filled with people who share his goals.

"You're not the only one that is fighting," she said.

"Well, I'm the only one who's still here," Fry responded.