Accessibility links
Major Powers Call For 'Cessation Of Hostilities' In Syria — But It's Complicated : The Two-Way Big questions remain about what this will actually mean on the ground in a country torn apart by five years of war. 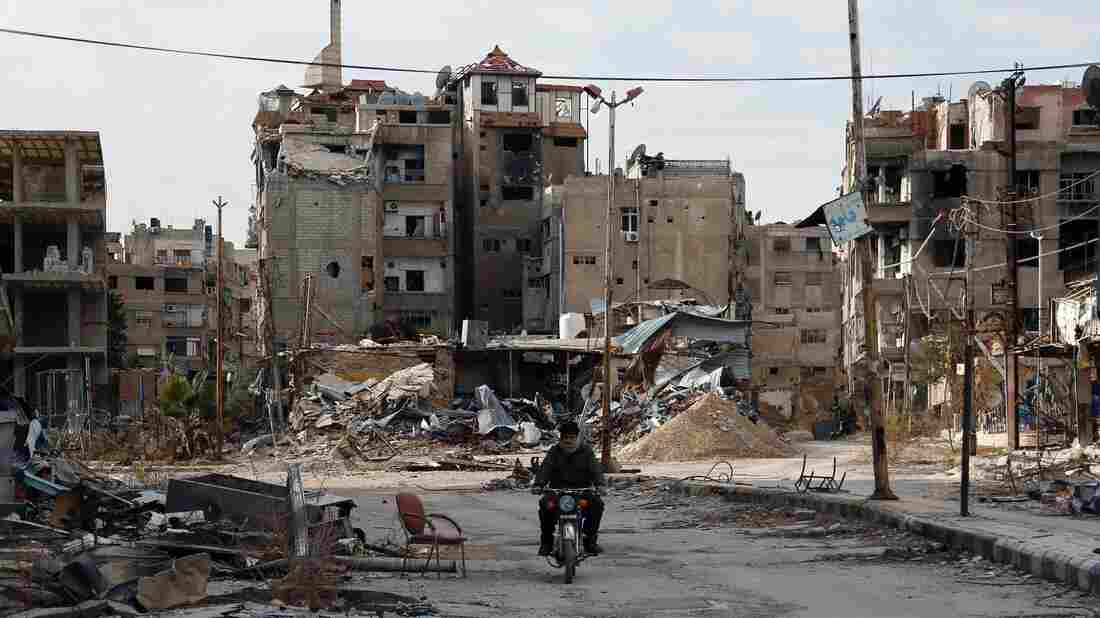 A man drives his motorbike past damaged buildings on Wednesday in the city of Harasta, east of the Syrian capital, Damascus. Abdulmonam Eassa/AFP/Getty Images hide caption 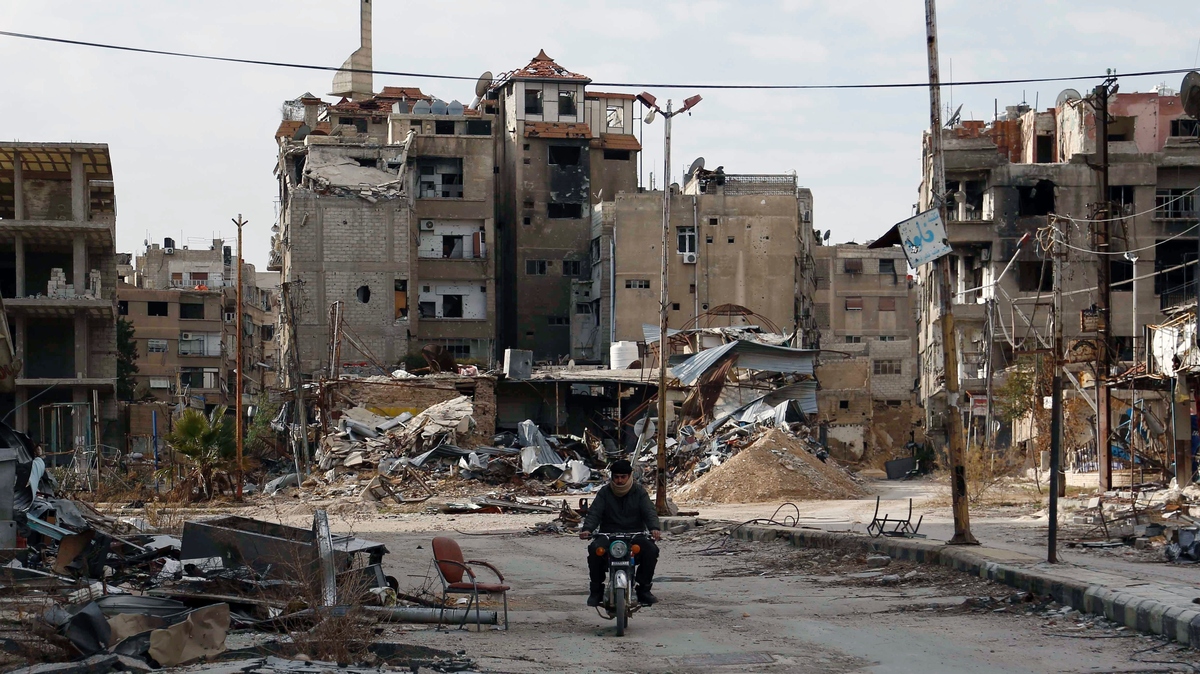 A man drives his motorbike past damaged buildings on Wednesday in the city of Harasta, east of the Syrian capital, Damascus.

U.S. Secretary of State John Kerry and Russian Foreign Minister Sergey Lavrov announced late Thursday that they had agreed to push for a "nationwide cessation of hostilities" in Syria within one week.

The communiqué backed by major world powers also vowed to work toward getting humanitarian aid into hard-to-reach areas such as the city of Aleppo.

But major questions remain about what this will actually mean on the ground in a country torn apart by five years of war.

The announcement happened during a meeting in Munich of the International Syria Support Group, which includes some 20 countries with an interest in the Syrian conflict. The discussions are aimed at getting broader U.N.-led peace talks going again.

The ISSG's communiqué is calling for a "cessation" of hostilities. Notice that's not a "cease-fire." Kerry describes it as a "pause" in fighting, and the U.N. special envoy for Syria, Staffan de Mistura, talked with Morning Edition about what that means:

"No conflict, and particularly no conflict as complicated as this one, can actually end abruptly with a cease-fire. ... What is much better is a pause, or a cessation of hostilities. In other words, both sides will stop heavy weapons. And trust me, that will make a hell of a difference.

"The next step is then negotiating a cease-fire. So the pause is the right thing, and that's what Syrian people are waiting for — no more bombing, no more mortars."

As NPR's Michele Kelemen has reported, the cessation of hostilities "does not cover ... areas controlled by ISIS or other terrorist groups like the al-Nusra Front."

And the parties involved in the conflict have different interpretations of just who is a "terrorist," raising questions about how this will be implemented. Michele adds:

This is the destruction in #Aleppo. Read how we're stepping up our aid efforts: https://t.co/5sTScvI6gW #SyriaCrisis pic.twitter.com/wzGPvqPS3N

"Russia's foreign minister points out that this ceasefire doesn't cover airstrikes on terrorist groups, and that's what they're saying they're doing in Aleppo. So he's suggesting that this operation in Aleppo, for instance, is going to continue.

"He brushes off criticism that the Russians are actually hitting hospitals and cutting off aid routes. And he was stony-faced, as he always is, when Secretary Kerry talked about what Russia's doing in this indiscriminate bombing campaign is simply backing up a Syrian government that's forcing towns to surrender through starvation."

Now, Russia's foreign minister says the U.S. and Russia will set up a joint task force to determine which areas are controlled by terrorists and therefore are legitimate targets — which is bound to be a complicated process.

Michele points out a crucial additional issue here: "This deal was worked out among the countries who support various sides in this war." She says, "The goal now is for all of them to encourage their proxies to cease hostilities."

While huge obstacles remain, aid organizations are hoping the agreement will help them get desperately needed aid into hard-to-reach areas, even as multiple parties to the conflict use starvation as a weapon of war.

"They agreed to work more quickly to get aid to besieged cities by air drops and by road," Michele reports.

One of those places is Aleppo, where Syrian troops backed by Russian airstrikes have launched an offensive on rebel-held areas. The U.N. said Thursday that some 300,000 civilians in the city are at risk of being placed under siege.

NPR's David Greene spoke with David Miliband, head of the International Rescue Committee, about what he's hearing from his team in Aleppo:

"There is a randomness to the bombings that means that the calls for a cease to those bombings seem to me to have an absolutely basic humanitarian imperative to them. ... There's no question now that the people who were previously threatened by [Syrian President Bashar] Assad and by ISIS are now threatened by the Russians, as well."

"There are defenseless civilians on the ground who are not participants to the conflict who currently face a triple threat of absolutely terrifying proportions."