Accessibility links
History-Making Philae Lander Faces 'Eternal Hibernation' On Comet : The Two-Way A tweet issued by the European Space Agency includes a cartoon showing the Rosetta orbiter thinking about its little lander taking a nap on the comet's cold surface. 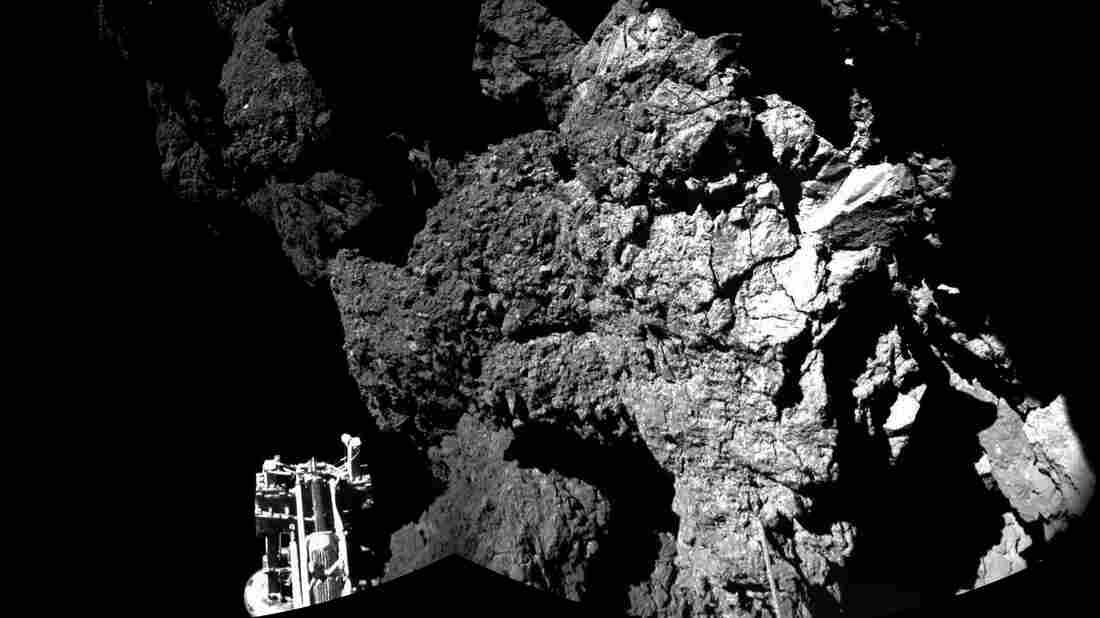 The final resting place of the Philae lander is seen here in a composite image relayed to Earth by the Rosetta orbiter. The lander is no longer communicating from comet 67P's surface. ESA/Rosetta/Philae/CIVA hide caption 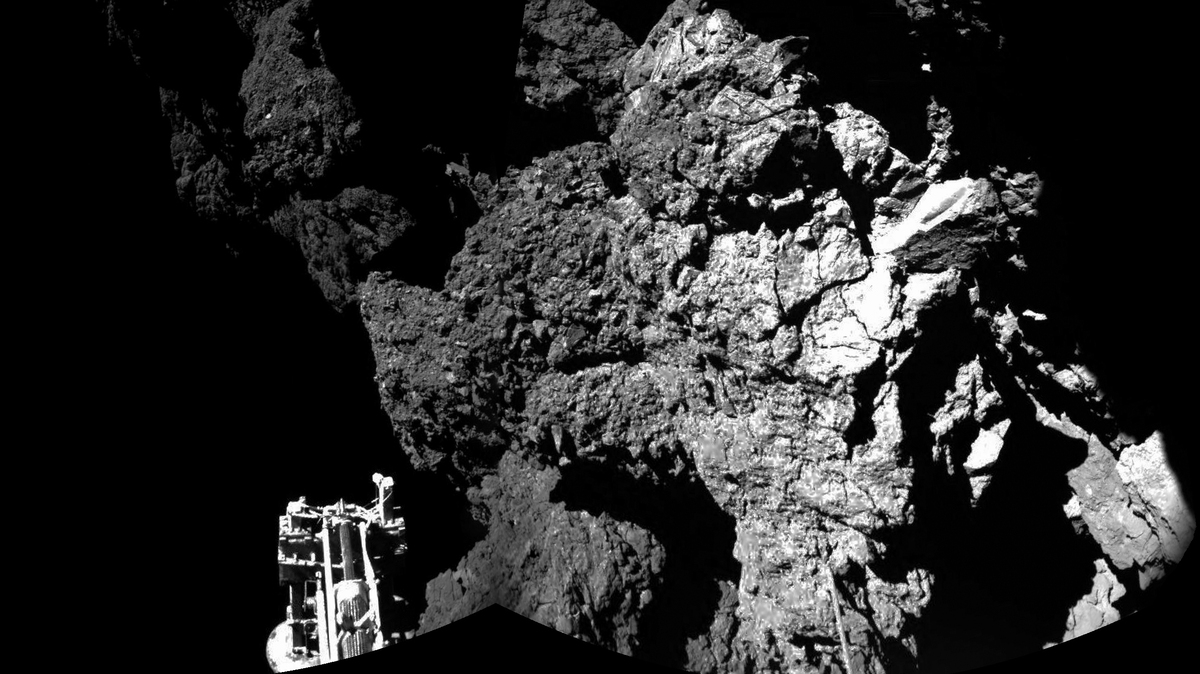 The final resting place of the Philae lander is seen here in a composite image relayed to Earth by the Rosetta orbiter. The lander is no longer communicating from comet 67P's surface.

Exactly 15 months after it completed a seemingly impossible journey to land on the surface of a comet, the Philae lander now faces "eternal hibernation," as officials at the European Space Agency say the craft doesn't get enough sunlight to power its batteries.

"The chances for Philae to contact our team ... are unfortunately getting close to zero," says Stephan Ulamec, Philae project manager at the German Aerospace Center, DLR. He added, "We are not sending commands any more, and it would be very surprising if we were to receive a signal again."

Philae is the lander from the Rosetta spacecraft, which for months now has been orbiting Comet 67P/Churyumov–Gerasimenko and listening for signs of activity from its companion craft. But after an encouraging period of contact last summer, Philae has been silent since July 9.

A tweet issued Friday from the ESA's Rosetta Mission Twitter account includes an artist's rendering of the current situation. But instead of an airbrushed space scene, this one is a cartoon showing Rosetta thinking about its little lander taking a nap on the comet's cold surface.

On Nov. 12, 2014, Philae captured the attention of people around the world when it landed on 67P, hundreds of millions of miles away from Earth, prompting Ulamec to declare, "We are on the comet."

In an ESA video recap of the 67P mission that was released Friday, Ulamec says that measurements of physical and chemical conditions and other data provided by Philae have "revolutionized our understanding of comets."

Before it shut down, the lander was able to send all the data it had collected — over the course of more than 60 hours of research — back to Earth.

Ulamec says that the European teams working on the project had expected "some interest" in the comet landing, "but this world-wide, immense and continued enthusiasm surprised me in an extremely positive way," he says.

He added that while the lander was operational, researchers worked even longer hours than they had expected, trying to adjust to problems like an inability to drill into the comet's surface — and a final landing spot that was more than a kilometer away from the intended target.

"After touching down Philae bounced several times and completed 80 percent of its planned first science sequence before falling into hibernation," the ESA says.

It was that bouncing around that limited Philae's long-term prospects. According to analysis by the ESA, the lander failed to fire harpoons that would have anchored its legs onto the comet's surface in a sunny spot. Instead, it tumbled around before settling in at least partial shade on the comet's craggy surface. 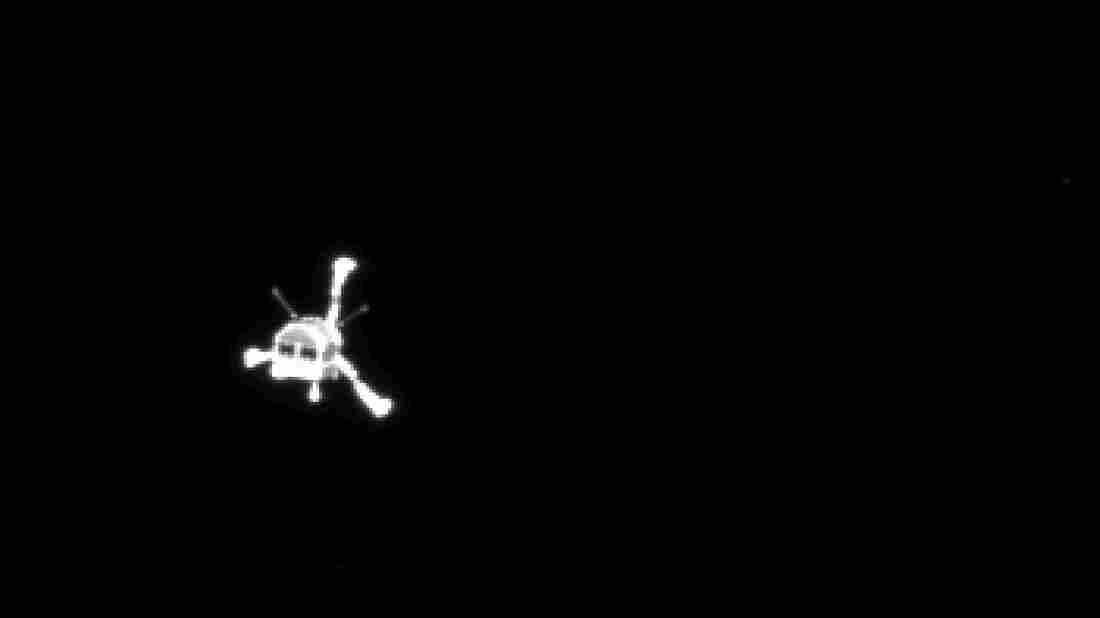 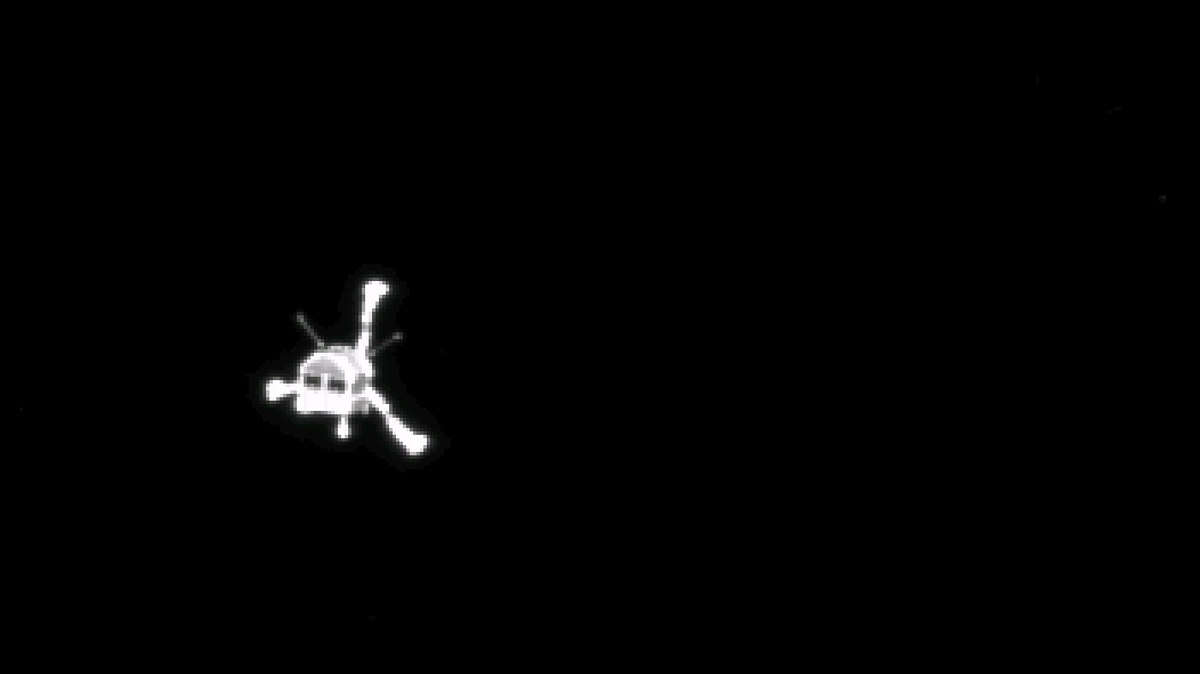 The Philae lander, seen here heading to a comet's surface after leaving the Rosetta spacecraft in 2014, isn't expected to send any more signals, the European Space Agency says.

In addition to being unable to charge its secondary batteries, Philae would also have trouble functioning long-term on a comet where nighttime temperatures reach minus 180 degrees Celsius, researchers at Germany's space agency say.

The next big event for the space agency's historic mission to explore a comet will come in late September, when Rosetta will join Philae on the surface after being sent down for a "controlled impact."

Together, Rosetta and Philae traveled for 10 years to reach their rendezvous point with Comet 67P/Churyumov–Gerasimenko.